Hard Reset is a visually striking FPS that pits the player against waves of vicious robots, with emphasis on the vicious. It comes hot out of Poland from folks who had previously worked on The Witcher and Bulletstorm, and it’ll kill your face dead.

Destructoid got some hands-on time with the game ahead of its release later this year, and now you get to read about it! 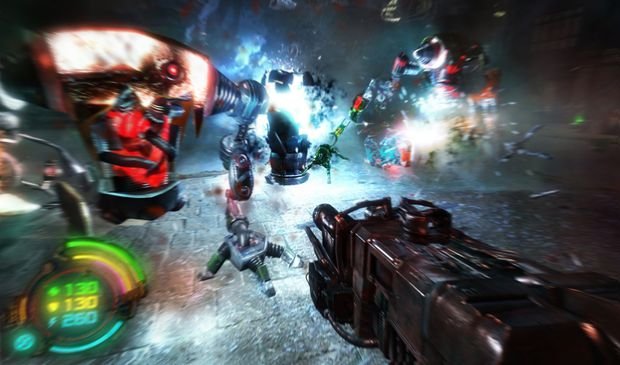 In an age of gritty military shooters, regenerating health, and cover-based combat, it’s always refreshing to see a game that sticks to the FPS genre’s old-school roots, and Hard Reset is unapologetic in its commitment to the nostalgic. This is a game with the classics in mind, evoking the days when all you needed was a gun, some enemies, and perhaps another gun.

Hard Reset pits the human player against a horde of robots that have gone bezerk in a cyberpunk world that bears more than a passing resemblance to Blade Runner. These robots come in waves and are intensely aggressive, hurling bullets and bodies at the player from all angles. Fans of Painkiller will instantly feel at home with Hard Reset, where the main aim is to walk for a bit, shoot a load of things, walk some more, then shoot again. Aside from a few instances where one has to press switches or destroy power generators, the focus is purely on violent, fast-paced combat.

With contextual commands and an oppressive atmosphere, Hard Reset also takes quite a bit of inspiration from DOOM 3. You’ll interact with computer terminals automatically, your target reticule becoming a more traditional mouse pointer when you approach interactive screens, and there are plenty of tight corridors with robot opponents ready to jump at you. 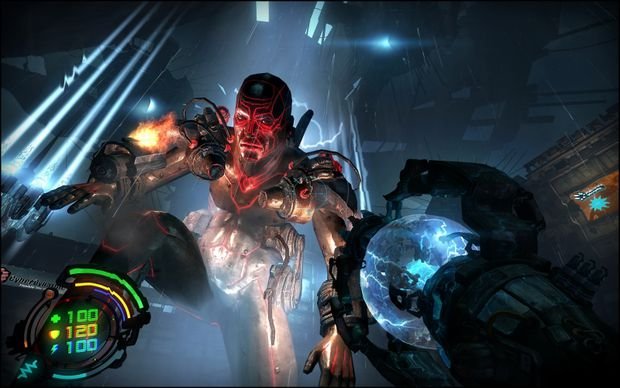 The fundamentals are in place for a great wave-based shooter, and there’s plenty of style, but I do have a few concerns that I hope get addressed before release. First and foremost, the “look” sensitivity is very temperamental and requires a lot of tinkering. It feels sticky, and I noticed that upping the sensitivity level didn’t help. The game gets caught between being too sluggish and too twitchy with no happy medium. It’s something that one can get used to, but it could definitely be better.

The player character moves a bit too slowly for such a fast-paced game. Most enemy projectiles cannot be avoided, and charging enemies are very hard to dodge. There is a sprint action, but it lasts for a very short time and takes too long to recharge. The player needs a level of agility more on par with the enemies in order for fights to feel fair.

A little extra help in this area would be welcome, as Hard Reset is not afraid to throw everything it has at the player. Fights are intense, tough, and pretty damn exhilarating. A few enemies are annoying, like the rolling bombs, but winning pitched battles against increasingly angry robots feels damn rewarding. 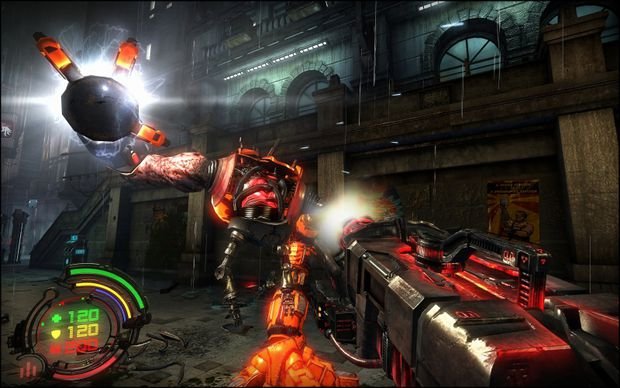 There are two main weapons at the player’s disposal: one that dishes out standard ammunition, and another that fires energy projectiles. At first, these weapons are only kitted out for assault rifle and plasma rifle rounds, respectively, but they can be augmented to transform into different weapons. The assault rifle can become a shotgun, grenade launcher, or rocket launcher, while the energy weapon can shoot lightning or explosive energy beams once upgraded. Each augmentation can be further upgraded by spending points uncovered throughout levels, in order to improve stats such as fire rate or explosive radius. It’s a cool system, although I found that several weapons were quite inefficient, usually suffering from fire rates that weren’t fast enough to handle the robotic onslaught.

This problem of speed and sensitivity is perhaps the only thing holding Hard Reset back. It’s a gorgeous-looking game with a great visual design, challenging wave-based gameplay, and an honest, old-fashioned sensibility that helps set it apart from modern shooters. I have incredibly high hopes for the game, and even moreso after learning that it’s focusing purely on a single-player experience. It’s clear that these guys want to take the FPS genre back to its roots with Hard Reset, and I am excited to see just how good a job it does when the full product is ready.

We definitely need more games like this on the market, that’s for damn sure.