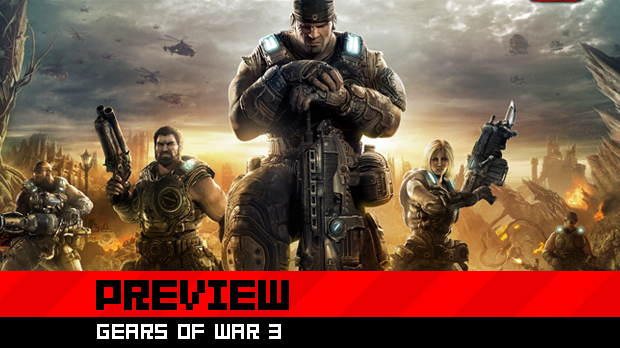 That’s what you and your fellow Gears are — stranded. Everything that could go wrong, did: Jacinto has fallen; the C.O.G. has ceased to exist and Richard Prescott has disappeared; and what’s left of your forces have retreated to the CNV Sovereign, a mobile city out at sea. The Gears are left no choice but to pull together what small scraps they can and form a pastiche of defenses and weaponry to use against a new, terrifying enemy: the Lambent. Oh, did I mention that the Locust are still an enemy, too?

Well, “stranded” is one way to put it — sure, you’ve been left behind on Sera, along with the other helpless civilians, and no longer are under the umbrella of the government. Really, though, there’s only one way to describe your situation: f*cked.

My father has called me. To say goodbye, Anya explains, but I’m not really listening. We walk down to the end of the hall as she briefs me. The light seeps in from the door cracks, calling me forth. On the other side is hell itself. I look around me as my fellow soldiers try to push back an endless horde of Locust. The sky is ablaze, the light casting an orange radiance over all of us. Bullets whisk past me, and I try to ignore this ominous feeling that has crept itself into the corner of my thoughts lately: that this is it. This is how it ends. I’m hugging this pillar for dear life, popping in and out of cover as necessary, trying to stay alive as long as possible, but deep down, I just … know. This is the last stand. I’m not coming out of this alive.

And then I wake up. It’s a dream, just a dream — a nightmare, rather. Shake it off.

Whoa — what’s all this about plot? What’s this about feelings? Isn’t Gears of War mostly burly men shooting each other with chainsaw guns, grunting suggestively as alien bits, pieces and blood explode in a wonderful confectionery of violence? To an extent, yes, but nonetheless, the effort put into the story — penned by novelist Karen Traviss, who is also behind the fantastic Gears books — is especially evident in the third title. When the Gears aren’t cracking jokes about asses or whoo-whooing like a locker room full of teenage boys, the tone of the game is thick and somber. 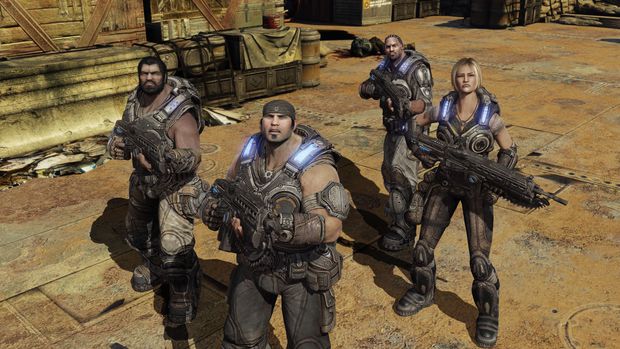 There’s a reason for that: where Gears of War 2 chose to up the ante and increase the scope of the franchise, Gears of War 3 aims to be personal. For both Cliff Bleszinski and Rod Fergusson, personal means tapping into their own experiences with their deceased fathers. Accordingly, the heart of the story in Gears of War 3 is a paternal one. Marcus has received a call from beyond the grave — his father is alive, and he’s being held hostage somewhere. Moreover, Mr. Fenix claims to have developed a solution for the Lambent problem. The message cuts out before Adam can tell Marcus what this breakthrough is, of course. Still, one can’t help but muse over the possible cathartic significance of this premise for both Bleszinski and Fergusson, eh?

It follows, then, that this a story about vulnerability, too. The Gears have been abandoned, left to fend for themselves. This means they have to turn back to older weapons from the Pendulum Wars, such as the retro lancer. But we see it in the small details, too. For example, the new armor isn’t full-body like the suits we saw in the first two games; Marcus and company are actually showing some skin. Dom has lost Maria and his children, and is now a farmer of sorts, on the ship — overalls, beard and all. Clayton is one of two remaining Carmines in the line. Even the Cole Train himself shows some emotional flexibility this time around. Actually, the most touching moment in the first act had to be watching Cole deal with his past as a thrashball star.

A segment of the first act sees the player visiting Hanover, Cole’s hometown and also home of the Cougars, his old team. While we’re there to look for supplies in a local supermarket, Cole insists that we visit the thrashball stadium, which is a multiplayer map that was available in the beta. On our way there, we meet civilians who are initially hostile toward the Gears, because the Gears are nothing short of a trouble magnet. Then, these civilians see Cole and their entire attitude toward us changes. Cole’s their hero! 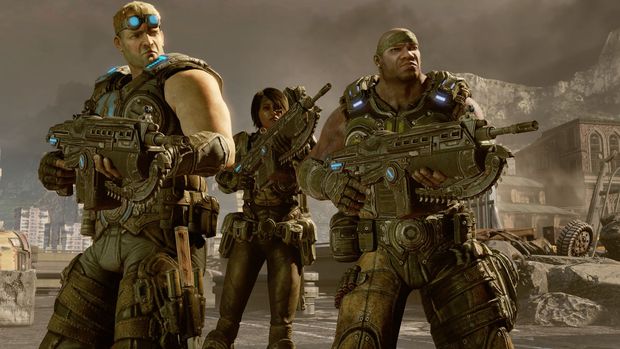 Naturally, he revels in this attention. But as we progress further through this level we start to see Cole’s facade slip away. While looking at his own image — which is plastered all over the place — he said something that, frankly, threw me right off. “Ever feel like you’re dead, but nobody’s ever told you?” This characterization, in combination with a fantastic playable football section that I don’t want to spoil too much, made this segment of the first act the most engaging for me.

Speaking of characterization, I am obligated to take a moment to talk about the interaction between Sam and Baird. Sam, you see, is voiced by the sensual Claudia Black. Y’know, the woman behind characters like Morrigan from Dragon Age and Chloe Fraser from Uncharted 2? Yeah, her. True to form, Black brings her signature strong, independent, and sexy bitch role to the raven-haired Gear, and this makes for some hilarious sexual tension between Sam and Baird. Marcus may be on the game’s cover, but the segments with Cole, Baird, Sam and Clayton stole the show in the first act. The Hanover section is a real treat.

I’ve spent most of this preview detailing what the third Gears title is about, but very little on how it plays, haven’t I? Well, there’s a reason for that. There’s not too much to be said, gameplay-wise. Don’t get me wrong: it plays marvelously, but if you’ve played the previous titles, you know more or less what’s in store for you. Still, there were a few new, noteworthy elements. 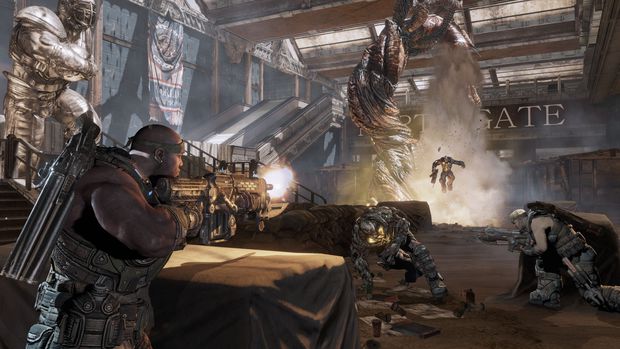 Fellow writer Ryan Perez and I went through the game on Hardcore difficulty — the development team suggested starting here if you’re a Gearhead already. As we went through the first act, I noted that combat was, for the most part, long-range. This is due to a variety of design choices. First, speaking logistically, the game has to accommodate four possible players because it supports four-player co-op. This means that combat areas tended to have ample room, allowing players to roam about freely without getting in each other’s way too much.

I appreciated this design, because it made levels feel like a giant playground — every encounter had a myriad of locations, if not levels, from which one could engage in combat.  Secondly, well, getting close to the Lambent was generally not a good idea. Killing one of these infected baddies results in an explosion that you do not want to be close to, but it took me, oh, I don’t know, a dozen downs before I learned this lesson the hard way.

In my defense I often found myself out of ammo, even with the added damage of active reload, and this saw me trying to take ’em down with my shotgun. On that note, because the combat was often long-range, I didn’t touch weapons outside of assault rifles very often. I felt dissuaded from using my shotgun save for when I had absolutely no other choice, because that almost always ended up being more trouble than it was worth, and the pistol damage is straight-up laughable. Power weapons, while gratifying in their oomph and crunchy brutality, didn’t seem particularly useful — ammo was limited, and enemies didn’t cluster enough to take advantage of their heavy firepower. 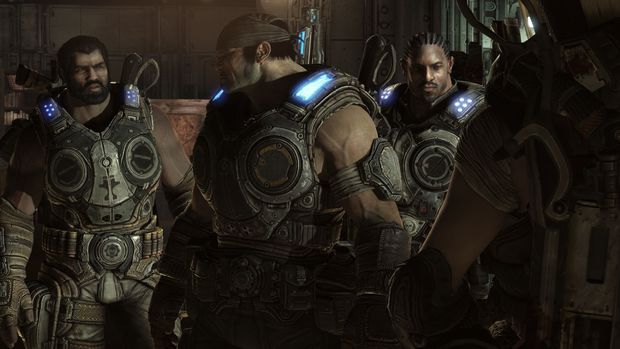 Anyway, the space available to players in an encounter was definitely taken advantage of by the AI. On Hardcore, the difficulty seemed just right for the most part. One Lambent type in particular likes throwing balls of Imulsion that can go through cover, which hurts a lot. These battles made my blood rush, because I couldn’t stay anywhere for too long, and cover itself wasn’t necessarily the haven it usually is. It’s interesting to see Epic play around with the idea of cover; aside from this Lambent type, we’ve also got the digger launcher to consider, an underground grenade launcher. The digger launcher laughs at your silly notion of cover, human!

The aforementioned segments found me cursing like a sailor, because oh my god was this boss-type difficult to get rid of. I found myself praying to the crimson omen more times than I care to admit to. That experience had me thinking that the vote went against Carmine’s favor, because the only way I can explain his refusal to pick me up during these encounters was an outright loss of the will to live!

The last new element of gameplay that I experienced during the first act were the mechs, which I actually found a tad disappointing. Gears is an experience, a feeling. The exhilaration of the roadie run, the full-bodied thud of sticking to cover, the pop of a successful active reload, the swish of a roll, the crunch of a headshot; Gears has, hands down, the best sound effect for a headshot. Everything in the game is visceral, is felt; everything carries an internal cadence, a rhythm. Most of the new weapons follow suit, have friction in their own ways, but the mech suits, for the most part, do not follow this paradigm. Though you feel the weight of your movement — the suits are heavy, after all — shooting seemed to fall flat, and it didn’t feel visceral at all.

Still, what I saw of Gears 3 left me wanting more and I’m definitely counting down the days until release — September 20, for those of you wondering. You’ve got the signature Gears gameplay, only refined thanks to some new design choices and level design wrapped around a new, brighter and colorful palette and contextualized under a surprisingly touching premise and great characters. Also: Claudia freaking Black.

Oh. It’s also of the utmost importance to you, as a consumer who is considering possibly purchasing Gears of War 3 this Fall, to know that Ryan and I killed the Lambent Leviathan that Cliff couldn’t take down on Late Night With Jimmy Fallon. Yeah, we’re awesome.