An amalgamation of dungeon crawlers and strategy titles, Dungeonland is definitely not the type of game you see often. On one end, it’s a hack-and-slash, class-based dungeon crawler, almost reminiscent of Diablo. From the other, it plays like a quasi-strategy title.

So many distinct flavors being mixed into one game wouldn’t sound like the best idea, but when you get your hands on it, one truth rings true. It just works, and Dungeonland is a damn good time. 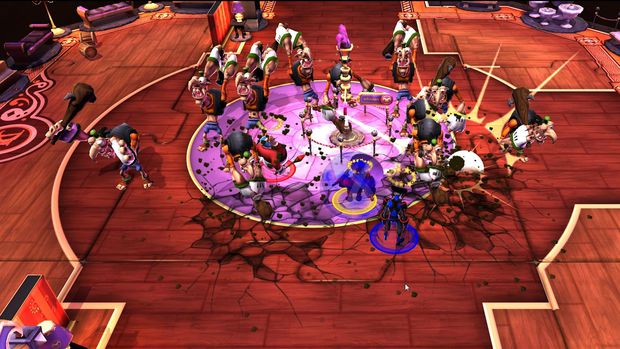 Dungeonland’s premise is an odd one to be sure. Fed up with heroes constantly raiding his dungeons, the evil dungeon master decides to build theme parks and lure the annoying heroes to their deaths. It’s from these two perspectives that the game’s duality shines.

Definitely the funnest way to play Dungeonland is as a dungeon master. From this end, gameplay takes a top-down view, tasking you with using all the traps, minions, and magic you can muster to kill the heroes before they reach the loot at the end of the theme park. Imagine if in, say, Diablo, all of the enemies, traps, and other perils were being placed and actively controlled by another player. A PvE mode where another person manipulates the environment. Sound awesome to you? That’s because it is. The actual tools you will employ in each fight are customizable too. Before each match, you choose which class of minions you want to populate an arena, the different traps, and even the final dungeon boss.

With your battleground set, you select what spells and abilities you will take with you to sabotage the heroes. The spells and abilities range from being able to heal your monsters, freezing a hero’s ability to use mana, and even inverting their controls for a short while. My personal favorite was a spell that caused a hero’s screen to go pitch black if they stay in its effective range. 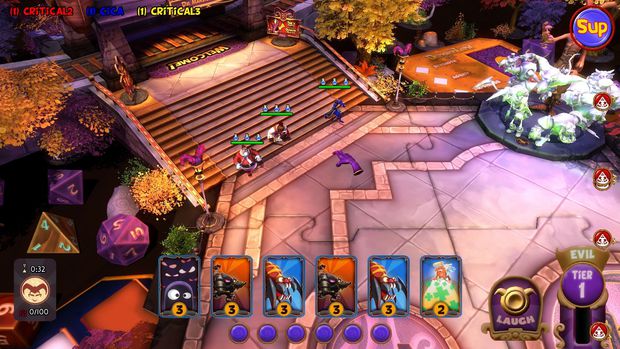 For the sake of balance, you of course cannot deal these spells out in rapid succession, and neither will you have them available to use at all times. While you do choose which spells to take with you before a fight, each are given as cards and are part of a larger deck. At the beginning of each round and after each checkpoint, you are given a fresh hand of cards completely at random.

Spells are also governed by a mana system, with each spell card assigned a number value of how many mana blocks they will each eat. While you do get a full mana bar after each checkpoint, heroes also get full health for every checkpoint they pass. You only start off with six blocks, with even the lower-end spells costing two blocks, and while you can equip passive bonuses to regenerate mana more quickly, you’d still do well to cast wisely and according to each situation.

If you still find the heroes are proving too much for your evilness, you can fall back on powerful danger events. Governed by an evil meter on the right side of screen, danger events can either be used as a tool to survive a hero onslaught or a final means to seal a kill when you have them on the ropes. The actual evil meter itself is filled little by little whenever a hero takes damage, with a half-full meter allowing you to trigger lesser danger events, such as summoning a horde of minions, or you can wait for a full meter to summon a boss-type minion. Mana blocks are also required to trigger danger events, with lesser ones costing four blocks, and major events requiring all six blocks, so this isn’t exactly a get-out-of-jail-free card. 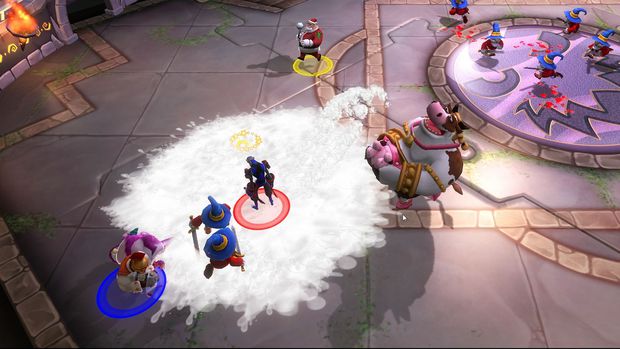 When controlling the heroes, Dungeonland plays like a traditional dungeon crawler. You have three character classes and each one follows its expected archetype: the warrior tanks, the mage acts as support, and the rouge deals high amounts of damage. Within these roles, though, you can customize your character a bit to better suit you.

Once in the dungeon — or theme park, rather — coordination is the name of the game. With all the aforementioned powers at a dungeon master’s hand, it is extremely important that each hero player know their party role. Playing against a team of lone wolfs, I reveled in maniacal joy as I crushed the heroes. Against a well-balanced, communicating team, it took every bit of wit I could muster to fight them off from checkpoint to checkpoint.

This action and more is of course online-enabled with a full-fitted multiplayer mode. Featuring drop-in, drop-out online play, the multiplayer is being built with accessibility in mind, allowing players to add in a friend mid-match by just plugging in any compatible USB controller.

If you could not already tell, I’m more than a little excited for Dungeonland. I’m not the greatest strategy fan around here, yet after a few matches I could really see myself getting into this one, especially with the duality of gameplay on offer here.