They had me at open-world where you’ll travel to kingdoms as the fated one to slay the dragon and save the world. I love that sh*t, even if I’ve just played a few games that sounded much like that recently. But it makes sense that another Western-style RPG is being attempted, especially after the wild success of games like The Elder Scrolls V: Skyrim, Kingdoms of Amalur, and The Witcher 2. There’s still a bit of room left for more in this genre space, especially when new, standout ideas are involved.

These Western-style RPGs are really hot these days, so much so that Eastern developers are now trying their hand at the genre. Most recently, From Software’s Souls franchise made a bloody splash, with the punishment of Dark Souls still fresh in gamers’ minds. Now Capcom takes up sword and shield, suiting up members of the Devil May Cry and Resident Evil development teams to go into battle with their own open-world quest fest, called Dragon’s Dogma. And it’s gooooood. 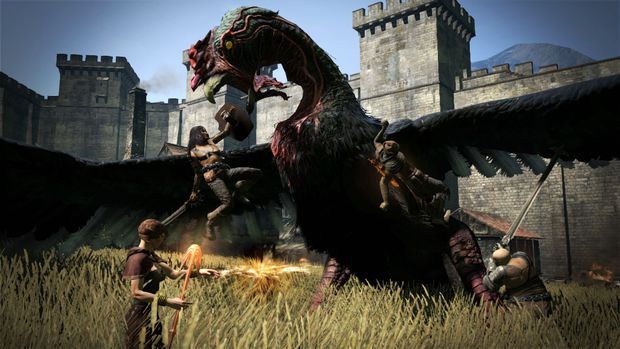 While Capcom has Japanese’d the WRPG forumla in Dragon’s Dogma, you wouldn’t know it from the game’s big budget story-establishing cutscene, as it’s about as Western as it gets. After a dragon swoops in to attack your seaside town, you decide to get ballsy and defend your home, taking up a fallen soldier’s sword to go face to face claw with the beast. Unfortunately, your weak sword jab is nothing to the dragon’s scaly hand, but it’s still enough to piss him off, so he plucks your heart out with a single clawnail, leaving you to die on the beach. But you don’t die. It turns out that you’re the Arisen, a destined hero that actually has the power to take down the dragon. Go figure.

After creating your character, customizing its look, and choosing its class (picking from a warrior, mage or strider), you’ll set off on a seemingly endless fantasy adventure, where you’ll explore a vast open world, taking on countless quests, lengthy treks and huge monsters, working to finally make your way back to the dragon, hoping to get your heart back. Dogma’s world can be freely explored in that Elder Scrolls kind of way where it seems like you could walk for days, constantly finding something interesting in the distance to make your way towards. It also shares another trait with that franchise: managing to suck you in to its world and take over your imagination. 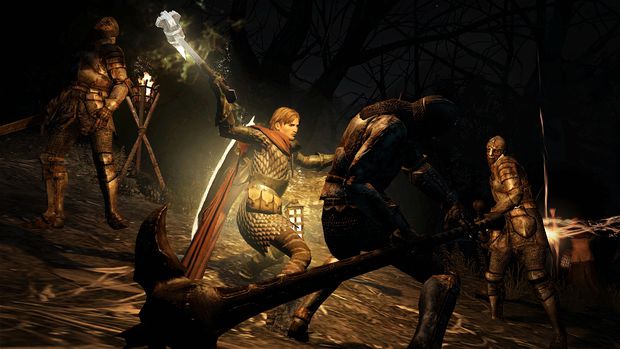 You’ll never explore alone, as Dragon’s Dogma Pawn system has party members always at the ready for you. Pawns mystically appear from a void called the Rift, ready to serve the Arisen. They have no soul or will of their own, and are totally open to your commands and wishes, following you around loyally, calling you “master.” You’ll get one main Pawn that you can mould as you see fit, establishing their class, look, weapons, abilities and even behavior. Beyond this buddy you’ll have access to two more Pawns from the Rift to make a party of four, though you aren’t able to customize the other two.

In an interesting online connectivity twist, your main Pawn is shared online, uploaded to the rift for others to hire and use in their own party. The higher you level your Pawn, the more it’s worth, and the more it will cost other players to use. Similarly, you can spend earned RC (Rift credits) to hire someone else’s Pawn, adding them to your own party. These pawns can be freely dumped and hired as you see fit, enabling you to custom tailor your party for any battle or quest situation. My pawn is only worth a few hundred RC, but she has already gone out on adventures without me, always coming back with experience, money, item loot and even advice for quests I might go on later.

Through this system, Capcom has figured out a way for all Dragon’s Dogma players to enjoy their own single-player experiences while maintaining some online interactivity with each other. You’re able to reap the benefits of other player’s journeys through their Pawns, and you’ll pass on your experiences (uploaded every time you stay at an inn) to them in the same way. This always-connected backbone is the unique twist that makes Dragon’s Dogma stand out from the other recent open-world games. 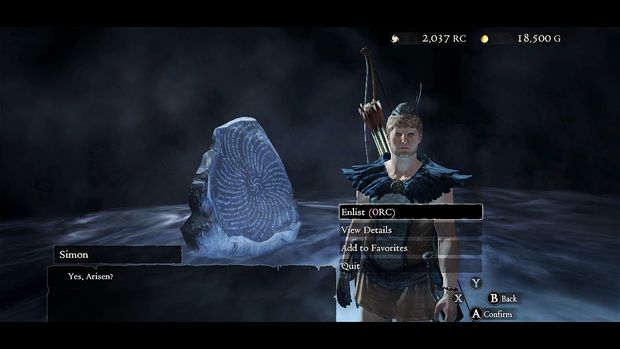 Thankfully, these Pawns aren’t just mindless bots. They’re actually quite talkative, offering up guidance or advice frequently during your travels. They’re also pretty handy in battle, with the AI balance keeping them busy working within the confines of their class, though sometimes smartly breaking out to assist you with buffs, or offer up a heal spell in a pinch. In key battles they’ll yell at you to point out weak spots or key strategies, and after successful battles will shower you with praise, or sigh in relief after closer ones. Even during adventuring they’ll serve as a sort of working tour guide through the game’s world, quick to point out landmarks or enjoy the scenery while picking up loot and picking off baddies along the way. So, while you’re technically playing alone in a single-player story, through Pawns you’ll never feel alone, and with party members pulled from the Rift, you’ll feel like you’re playing with others. Neat stuff.

While Dogma‘s world is freely explorable, you’ll want to take on quests to get started, with the hopes of eventually building up your abilities to take on the big guy. Quests can be found everywhere, from job posting boards to NPCs, and their type varies greatly, ranging from item delivery and escort work to full-on beast slaying duties. You’ll literally trip over things to do, though it’s ultimately up to you to decide what you’d like to take on. For my first few hours I took on whatever looked fun, slowly working my way up to more serious work. Even though I’ve only played for about a week, I’m already hooked on the pleasant pace this game sets. 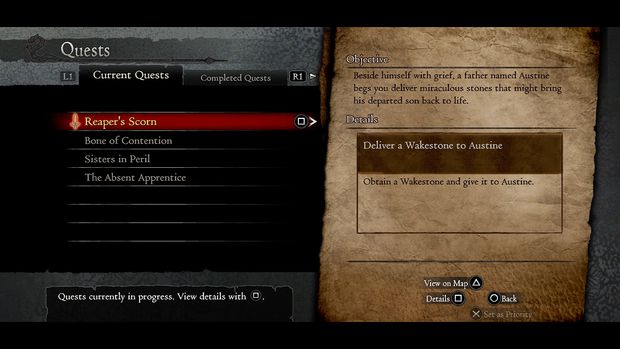 Beyond the standard training quests, it’s easy to bite off more than you can chew, even early on. I made the mistake of taking on a quest where I was tasked with exploring a well to kick out some baddies that managed to sneak in after the dragon attack. It sounded easy enough, and started out with killing mere critters, but it quickly escalated, putting me in a sub-boss battle with four reptile-like creatures that quickly devoured my party. Coming back a bit later had me barely taking them down, but later encountering some rogue bandits that destroyed my party once again in the same area. Defeated, I set about getting stronger, venturing out of the city to gain experience and learn more about the world. After many more quests, customizations, spell upgrades, armor purchases, and a better knowledge of battle techniques, I boldly marched back into the well, ripped through the reptiles with lightning spells from above, breezed past the bandits with melee attacks, and came out of a well passage on the other side, chest held high. I probably put 30 minutes into party prep and weapon selection before this quest on the third time, but it was easily worth the time.

Battling goes down in third-person, through a combat system system that manages to be both fast and meaty — the best of both worlds. It’s fast but not floaty, and there’s plenty of strategy required, so it’s not like you’re doing mindless Devil May Cry-style slashing. Basic attacks come off quickly, whether it be sword slashes or spell casts, but the harder, meaner ones take time, effort and planning, and careless misuse will find you staring at the retry screen. When the big hits connect, it feels good, but it’s never an easy thing, though you’ll get better at it as you learn your character’s intricacies. Main attacks are mapped to face buttons, and assignable skills can be mapped to a button combination that uses the bumpers as shift buttons. This allows free swapping of any of your skill sets, letting you get creative in your attacking strategies. 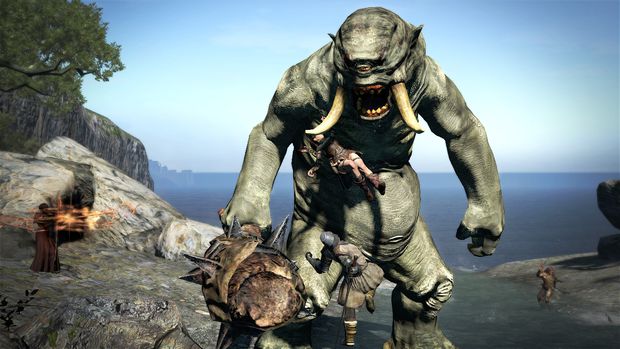 From what I’ve seen of the game, you’ll need to take full advantage of the dynamic combat system to survive. You’ll blast through basic rats and bats without effort, but anything beyond that is a solid challenge. You’re not up against Dark Souls-style ball busting here, but you also shouldn’t expect to mash your way through anything less than a simple goblin. If you’re outnumbered, you’re probably going to die, at least early on. If you’re ill-equipped? Dead. Out-ranked? Dead. And if your exploration sense overrides your common sense and has you venturing out a bit too far from home base? Super dead. This was a tough but enjoyable lesson.

Excuse the story-based pun, but Dragon’s Dogma has already stole my heart in the week or so I’ve spent with it. Its mix of Western foundations and Eastern design make for a really unique experience, and the online connectivity concepts are promising. Beyond this, there’s so much to explore, and even with a week under my belt, I’ve only unfurled a small section of what looks to be a huge world map. I can’t wait to see what’s out there.

If you like Western open-world RPGs, please put this on your list of games to check out. A demo is coming on April 24, and that’s certainly something to look forward to, I’m worried that even a lengthy demo is going to be too limited to show the full scope of the journey. I definitely recommend that players check out this upcoming demo, but I still think that only after you’ve spent some real time exploring will you get a real feeling of what Dragon’s Dogma has to offer.

Get ready, though. I think you’re going to like this.