Double Fine is one of those rare anomalies that carries a truck-ton of admiration from its fans, almost no scorn or distaste from anyone in this industry, and yet it has still experienced a fluctuation of moderate monetary success. And even more puzzlingly, the company simply asked fans for money, which resulted in over $3 million in contributions. Crazy!

While it remains the be seen what Double Fine delivers with their Kickstarter project, they’ve still carried on making games at their leisure. Coincidentally enough, one of those games, The Cave, is an adventure game in and of itself … one they’ve actually been working on for over a year now. 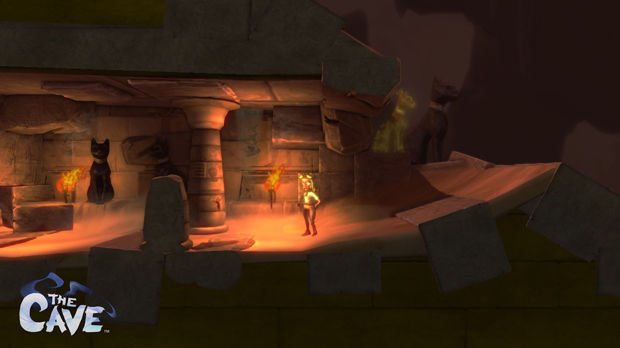 First, I want to clear up what this game isn’t: It’s neither a point-and-click style game, nor is it in old-school 2D sprites. Can you at least handle that? Please do, because everything else that is so loved about this genre is certainly here, and in the cherished style of one of the genre’s pioneers, Ron Gilbert.

For those of you who don’t know who Ron Gilbert is, well, I feel a tad sorry for you. His body of work consists of some of the most cherished games in history: Maniac Mansion, The Secret of Monkey Island, Zak McKracken and the Alien Mindbenders, and more. I’m pretty sure he also invented driving on two wheels while blasting Sabbath (screw it, might as well give him a little more). I’m an infant in this industry, compared to my peers, and even I’ve experienced this man’s games.

So an adventure title being made by a man such as Gilbert would be like an epic biopic being directed by Orson Welles, were he alive today. It’s the creator making another of his divine creations. 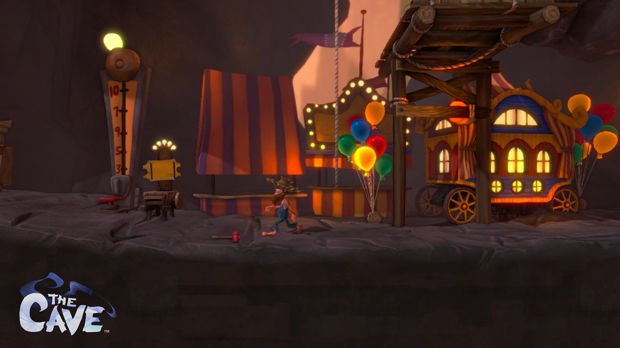 The Cave started off exactly how I expected, charmingly funny. An ominous voice explained how he has been a source of hope and desire for people throughout the ages — those who simply seek for their greatest of wishes to come true. We were then introduced to the Cave. Really, it was a talking cave. Don’t laugh at him, though. As he stated, “It’s hard enough dating, as it is.”

Players are given the choice between three of seven character archetypes: the wise Monk, the daring Adventurer, the slack-jawed Hillbilly, the methodical Scientist, the stalwart Knight, the rift-bending Time Traveler, and the creepy-as-shit Twins. All of these characters, as expected, have their own personality, story arcs, and special abilities. How you combine them, though, is where the real meat of the experience lies.

After picking a combination of three characters, players are thrown into the depths of the Cave, where they must solve a variety of zany and kooky puzzles — in that familiar Gilbert fashion — to reach that specific area of the cave where a particular character’s wish will come true. Double Fine was pretty light on the details of each character’s wish and quest, but after being told that the Hillbilly’s ultimate goal is to find love, I can tell that plenty of gratifying heart, humor and hubris will be present in each character’s journey. Stuff like this is where Double Fine excels, after all. 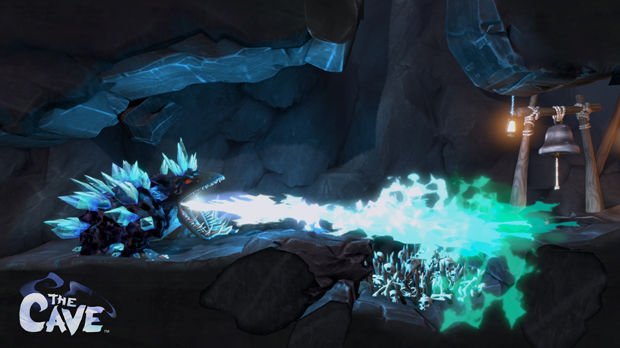 Did I mention the game is kooky? One of the puzzles shown consisted of the Scientist, Knight, and Hillbilly. At a particular area of the Cave, a giant, fire-breathing monster blocked their path (discovered after the lovelorn yokel was fried to a crisp). Just before the monster lay a spiked pit filled with bones, and above it hung the giant arm of a crane, which lowered into the pit and hoisted up whatever remains it could grab. To lure the monster to the pit, though, the Scientist had to reactivate a vending machine (which read “OMDOGGG!”) with a bucket of water, subsequently providing a plump, juicy sausage. She put the frank on a spike in the pit, the monster began gnawing away at it, and then bam. The crane pulled the then-yelping and squealing beast out of harm’s way.

Another such puzzle was from the Knight’s storyline, where a large coin had to be retrieved from a deadly dragon, and then traded for a princess’s tiara. Obviously, a head-on approach resulted in a flame-broiled archetype, but the Knight’s special ability — a magical aura that protected him from harm — was the perfect distraction as the Scientist snuck into a gate behind the dragon with the words “Do not leave gate open” written beside it, nabbed the coin, and then ran off with it. Unfortunately, she didn’t close the gate behind her, and as she ascended towards the princess, the sounds of chaos and bloody murder could be heard. One random voice even screamed, “What idiot left the gate open?!”

When the Scientist reached the Princess’s tower, though, her highness dangled from the gnawing jaws of the escaped dragon. No worries, though; the beast coughed up the tiara after he gulped her down. 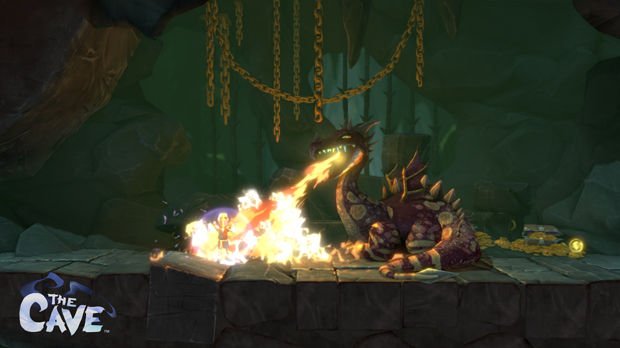 These two puzzles are but a taste of The Cave‘s many different puzzles that are indicative of the adventure games that inspired it. They never really made much sense, logically speaking, but they sure were funny and a blast to figure out.

A lot of you are probably wondering how the game looks and plays, though. As I stated before, it doesn’t look as old-school as many fans would have liked, but it is still in 2D. Or rather 2.5D, to be specific. The game is being built with 3D graphics, but on a two-dimensional plane, based in a seamless environment (no more going from room to room, static screens and all). Nonetheless, it looks great, as is expected from the fantastic art direction that Double Fine typically provides.

With all that said, The Cave handles much like a 2D platformer. While no balancing acts or quick actions are required, the camera constantly follows whichever character is being controlled. Like I mentioned in previous examples, up to three archetypes are chosen at any given time, which requires the players to switch between them, depending on the situation or puzzle that is present. Basically, The Cave is an adventure game at heart, with some of the trappings of more modern titles. Considering that the game will also be available on consoles, it only makes sense that such a control scheme would be present. 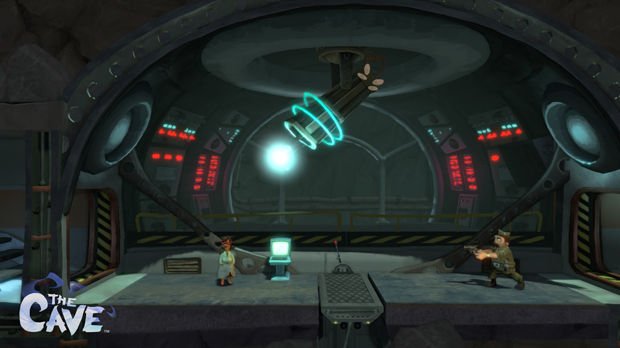 So there you have it. As countless eyes have been gazing at the activities of Double Fine, they’ve been slowly but surely working with a genre that many people have long considered “dead.” Obviously it’s not; publishers have just kept it caged for many years. Thankfully, companies like Double Fine have enough faith in their fans and the genre to let it run loose for a little while longer.

And yes, if you caught the rumors from earlier this week, this is also being published by Sega. Weird, right?