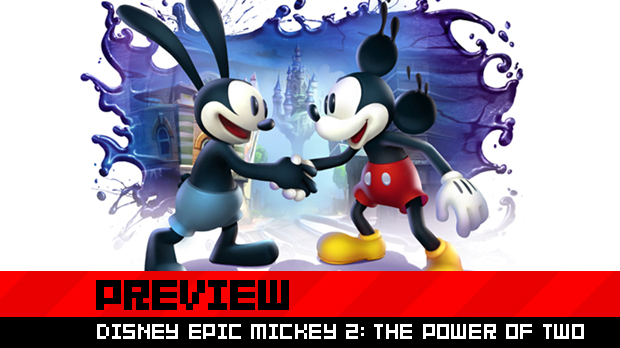 From the unexpected original to the inevitable sequel, Mickey Mouse and veteran game designer Warren Spector are on a strange ride together.

With characters breaking into song for musical segments, full voice acting, split-screen co-op, and one of the most ambitious camera systems in recent memory, Epic Mickey is going to get a bit stranger this fall in Disney Epic Mickey 2: The Power of Two.

Pleased by sales, humbled by fans, and aware of reviewers’ complaints, developer Junction Point is making a sequel with all parties in mind. The result is a game that is shaping up to offer the same charm of the original, just with less fuss and in HD. 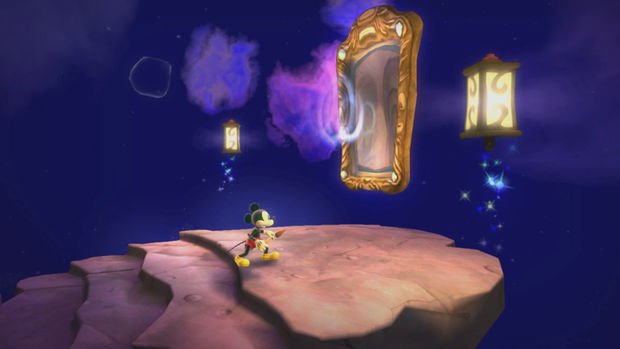 The announcement of the first Epic Mickey left me scratching my head. “The co-creator of System Shock is making a Mickey Mouse game revolving around moral choices and platforming?” I said. Then I said it again and tried slapping myself awake.

Despite all odds, this pairing worked in terms of aesthetics and storytelling. Spector’s love letter to Disney’s origins was a dark, ambitious vision that stood out despite attached labels like “Wii game” and “kid-friendly.” Spector proved himself, once again, to be a master in world building and orchestrating a journey that becomes personal through decision-making and character investment.

On the other hand, Spector and his then-freshly-faced studio managed to partially fail at problems that 3D platformers overcame a decade before Disney Epic Mickey’s release. Our own Jonathan Holmes said it best in his review:

It’s ironic that the game’s writing does such a great job of showing off its characters from multiple angles, while the in-game camera has the horrid tendency to auto-adjust to the most unhelpful positions. 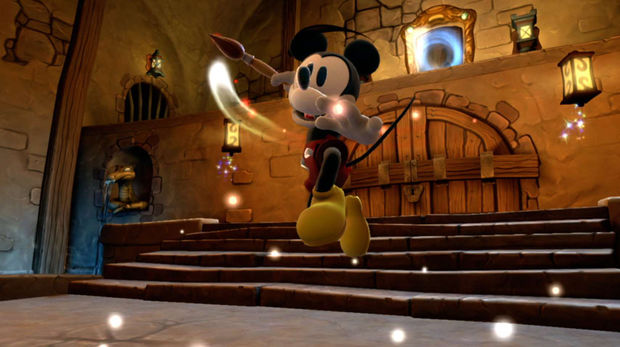 A New Coat of Paint

When you mention Epic Mickey’s sore points, Spector doesn’t talk around those issues. He talks directly about them. Or, more specifically, how they are being addressed in The Power of Two.

The biggest improvement in the sequel is the camera. In the original, players struggled to find a proper angle after fiddling with the controls. In Epic Mickey 2, players won’t even have to manually adjust the camera if they wish to follow only the main path.

Junction Point wants players to always have a perfect view of the world and action without laying a finger on the camera buttons. With a dedicated team making 1,000+ changes to the camera, the results need to be seen in action to be appreciated. 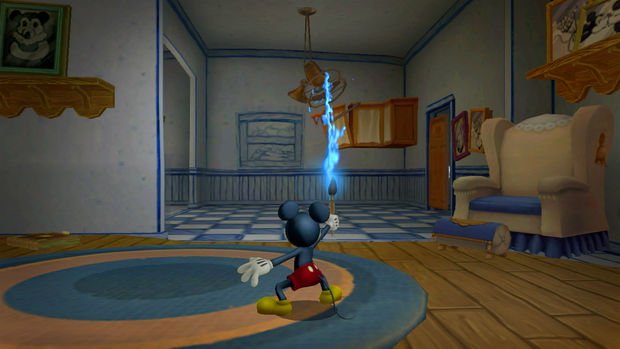 Most players will still adjust the camera in order to explore and discover hidden items, but it never is a necessity. Outside the larger hub areas, I didn’t feel a need to use the D-pad camera controls. The demo lacked any intensive platforming or combat segments, so it’s hard to say that the new system will work flawlessly under pressure. At the very least, Junction Point is taking this concern seriously.

A new camera is nice, but you know what’s better? Color. HD color! I liked Epic Mickey’s art direction in concept more than execution. The scale of Epic Mickey was impressive for a Wii title, but the game had a murky, dull look to it that soured the immersion. The sequel, in contrast, is a cheerful, primary-colored world that is a joy to explore. The 2D sections return with more depth in the background, and the 3D sections are populated with the nostalgic architecture found in old Disney films.

The lighting effects and new models are a step up from the original, but Epic Mickey 2 doesn’t look up to par with modern current-gen offerings. Its origins as a Wii title are pretty transparent. However, other modern platformers don’t have worlds as lively, detailed, and inviting as this. Let’s just hope the nasty lag in the demo is a temporary bump in the road and not a long-term challenge. 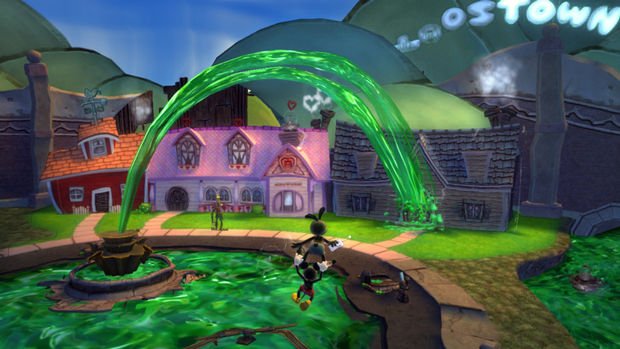 How do you make a game better? More stuff, of course! More challenge! More places! More players? Why not?

Oswald the Lucky Rabbit, ruler of the Wasteland, was a big part of Epic Mickey, and he plays an even larger role in the sequel. Oswald will accompany you throughout your adventure and use his electric remote to paralyze enemies and operate machinery. The character is controlled by an advanced A.I. system that works without player direction.

However, at any time, a second player can take the computer’s role and control Oswald. Along with doing some basic moves, Oswald can also help Mickey with co-op specific abilities, such as a vertical toss that helps Mickey reach high places and a Banjo-Kazooie-esque propeller spin to glide across a gap.

It’s nice to have some help in combat, but I don’t see why Oswald needs to be gimped. Though the rabbit can paralyze enemies, it’s up to Mickey to defeat or save them with his own devices. No matter how you play, it will be Mickey’s decisions that make up the adventure; Oswald is just along for the ride. Hopefully, he won’t get in our way while we make the tough calls as Mickey. 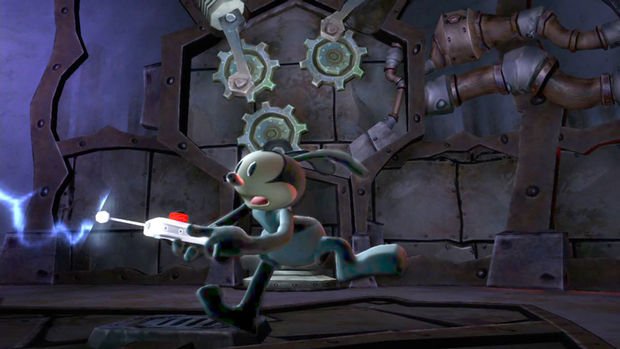 As if the original didn’t have enough genres attached to it (RPG, platformer, action-adventure), Epic Mickey adds one more: musical.

Throughout the game, players will be serenaded by songs from a notable cast singing tunes by returning series composer Jim Dooley and songwriter Mike Himelstein (Shrek, Dorothy of Oz). The developer and publisher claim that Epic Mickey 2 is the first videogame musical, but it’s a tough call to make until we see the context and frequency of these songs.

There wasn’t any singing to be found in the demo. However, the opening cinematic finds The Mad Doctor returning to sing a song (“Help Me Help You,” he repeats). It’s no instant classic, but it’s not grating, either. Spector has professed his love of musicals before, so I expect these scenes will be made with a lot of heart and musical history in mind.

What’s more exciting to me is that the game will have a full voice cast. No longer will characters’ words be paired with N64-era sound loops. Now, each character — even those who never had a voice in Disney’s history — will speak their dialog. The full voice cast hasn’t been announced at this time, but we do know that Frank Welker (Transformers) will be playing the role of Oswald. Along with the jump to HD, voice acting can go a long way in making the world of Epic Mickey more contemporary and inviting. 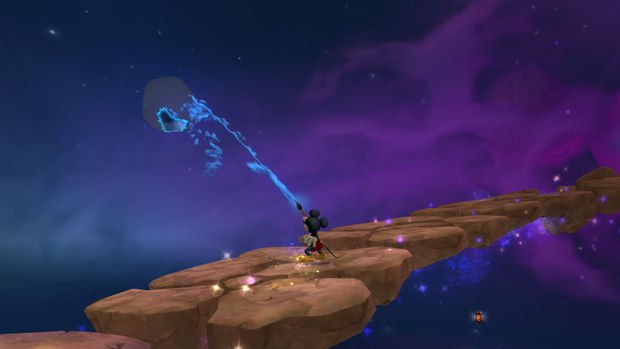 The demo I played was a brief taste of what’s to come. As a result, it’s hard to get a good impression of just how far these improvements will go in making a superior sequel.

The demo consisted of three segments: a tutorial, a 2D side-scrolling stage, and an open area filled with characters with conflicting requests for the player. The tutorial stage left the strongest impression, showing off the revamped art direction (in HD) and camera. The camera turned smoothly by itself (think Uncharted) while I climbed up into the stars, as the game recreated a memorable scene from Fantasia.

This soon led into a brick cellar area where lovingly animated personified mops flung water from high above (à la The Sorcerer’s Apprentice). It was a beautiful moment that spoke to me more than any of the Steamboat Willie sections of the previous game. Then again, I fell asleep to Fantasia every night as a kid! 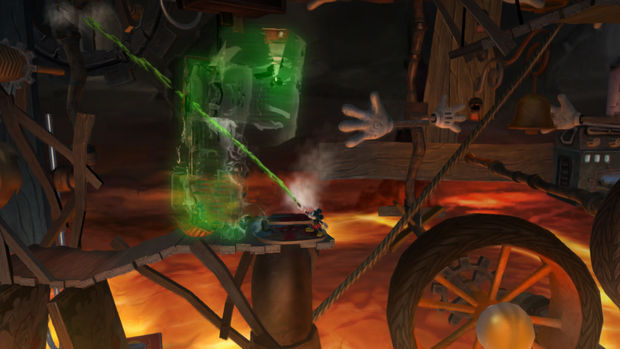 Speaking of the 2D Steamboat Willie sections, Epic Mickey 2’s side-scrolling section in the demo was a step forward in both visuals and design. The following open-world segment, however, was a bit less impressive. The combat of the first, love it or hate it, didn’t seem to have undergone any significant changes. Within a small hub in Frontierland, Mickey and Oswald could take on a few different objectives. I found the camera problematic in this area, when played in split-screen co-op. With half a screen, it was hard to get a good view of the action. It may be unfair to expect the camera to work as well in co-op as it does in single-player, but … it sure would be nice, wouldn’t it?

Junction Point may have jumped the gun in showing off Epic Mickey 2 a little bit early, but it still has a lot of promise in being a brighter, bolder, and bigger sequel. Between its beautiful HD colors and lively setting, The Power of Two presents a joyful world that I can’t wait to jump into and explore.

Here’s hoping Epic Mickey 2 has us singing its praises when it arrives this fall.