A first-person Assassin’s Creed mixed with BioShock’s plasmids, all wrapped around an inspired world that is part Half-Life 2 and part A Clockwork Orange — that sounds like a dream come true, right?

The best part? The team making it is responsible for some of the finest PC games of the last 15 years.

Few games have approached the level of depth and complexity that the Thief and Deus Ex series reached in the late ’90s, but Arkane Studios’ Arx Fatalis (2002) and Dark Messiah of Might and Magic (2006) came close, despite their flaws. If anyone is going to recapture the magic of a truly immersive, complex first-person shooter, it’s these guys, and Dishonored might just be the game to make it happen.

In Dishonored you play as Corvo, a supernatural bodyguard-turned-assassin, after he is framed for the death of the Empress he is supposed to protect. The story follows his quest for revenge and answers, taking on new contracts along the way in the city of Dumwall. 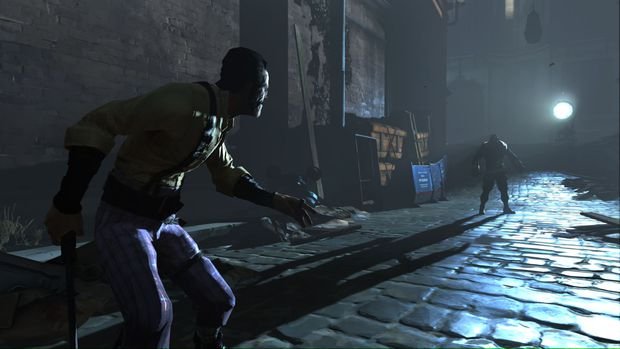 Like previous titles from the game’s creative directors, Harvey Smith and Raphael Colantonio, Dishonored is a game filled with options: both in combat and in how the narrative unfolds.

At the start of the demo, Corvo exits a murky sewer tunnel and enters a harbor filled with early-morning fog and a pastel-colored sky above. This city (Dumwall), like many in the world of Dishonored, thrives on the whaling economy (whale oil = fuel) and is cursed by plague-ridden rodents.

After spotting a gang conversing through his eyeglass, Corvo looks up and quickly wall-jumps to the second-story. Not since Mirror’s Edge have I seen a game with such fluid first-person traversal, although it’s anyone’s guess how it feels — this was a hands-off live demo.

At every corner of the demo, there is an opportunity to approach the situation with brute force or go stealth. The game’s unique Chaos system compliments each players’ play-style by throwing more gangs at players who want more brawls, as well as form a story more fitting of an aggressive assassin. If you stay in the shadows, hide bodies and use your supernatural powers to remain unnoticed, you’ll experience a much different stealth-driven game.

The combat itself is spectacular. The combination of swordplay, with your right-hand dagger, and gun in your left hand look great, but it’s Corvo’s special powers that really have me excited. After all, Arkane’s previous game, Dark Messiah of Might and Magic, remains one of the best examples of first-person melee.

When Corvo isn’t double-jumping across rooftops or pick-pocketing enemies, he is gathering items, destroying security systems and sneaking in the shadows. It recalls elements of Thief but it’s delivered at a quicker pace with a modern sheen. 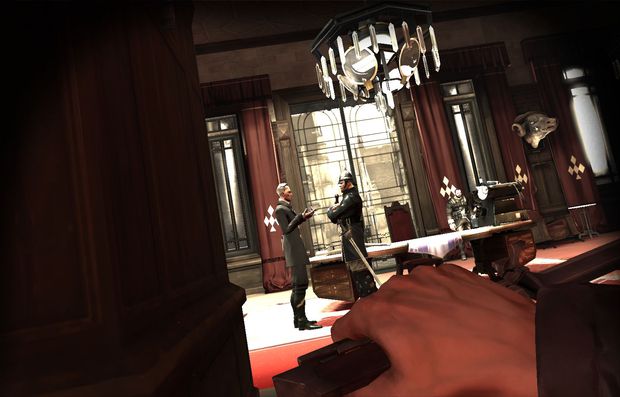 I didn’t know you could do that

At any moment in the game, the player can pull up a radial menu that houses your special powers and weapons. The powers, when properly combined, give the player access to some crafty assassination attempts and getaways.

Near the end of the demo, Corvo approaches his target — a corrupt lawyer profiting off the plague damning his city — and scans the room through a peephole all while an ominous harpsichord melody complements the dialogue exchange behind the door. The events that follow are as fluid as they are visually-striking.

Corvo knocks down the door with a gust of wind, stops time, and kills the lawyer along with his henchman as bullets travel in slow-motion. In a desperate escape, Corvo teleports to a platform outside the loft’s window and quickly runs away as a large turret fires upon him. If it weren’t for the infinite health enabled, that would have been the end of the demo.

“Things didn’t go as planned,” Colantonio said, making the audience wonder what else may be possible.

The truth, however, is that even Smith and Colantonio don’t know at this stage. They said that they are still discovering new possibilities when mixing powers together in unique combat scenarios. Balancing theses things will be a long-term challenge for Arkane.

On top of this, there are collectible bone charms that act as perks throughout the game. These modify your speed, damage and provide other benefits. The bone charms are randomized on each playthrough.  Only a fourth will be discovered the first time through your journey in Dumwall.

So, YES, YOU ARE THE BONE COLLECTOR! 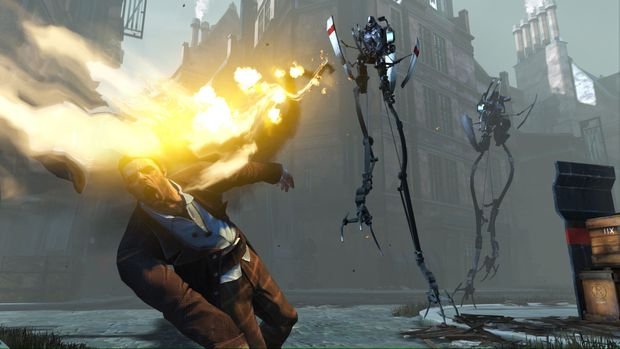 Although the assassination attempt was the highlight of the demo, I was happy to see the game is filled with alternate paths, hidden rat holes and other opportunities for sneaky stealth kills and guard distractions.

One of the key elements of Dishonored’s world is the diseased, plague-ridden rats. What’s not to love about that? Dishonored’s rats are a deadly force, devouring the corpses littering the streets, but they are your friends when under your control. Kind of like that film Willard. Anyone, remember that Crispin Glover blockbuster? No?

You can possess your rat buddies and infiltrate buildings through rat-size holes (YOU ARE THE RAT!) Or, if you are feeling more aggressive, you can summon a gang of rats and direct them at enemies. However, the possession of these abilities doesn’t mean they will be your friends for life. For instance, they will attack you in packs if they spot you in the dark. They will also chow down on a corpse, alerting guards. To avoid this you will have to pick-up and hide dead enemies extra carefully. 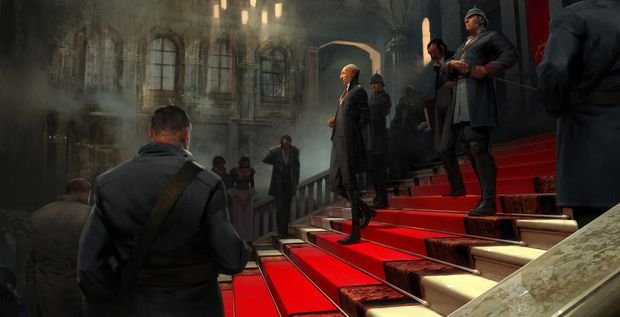 The amount of games that go through the amount of pre-production and research that films do are few and far between. The architecture, animals and even furniture of Dishonored’s world are the result of months of researching the locales and people of Europe. The end product is a unique vision where every corner of the game’s world has an identity informed by history yet distanced from reality.

A major part of this is due to visual design director Viktor Antonov, who was a key influence in the look of Half-Life 2’s memorable City 17. It’s not hard to see Antonov’s touches on this game, along with certain motifs. After all, both games deal with dystopias ruled by corrupt leaders fighting a rising rebellion.

These crazy mech-stilts that enemies control in Dishonored (see image above) look very similar to the walkers in HL2. The same can be said of other in-game assets, including the vehicles and security doors. The world itself, however, couldn’t be more different.

Not quite steampunk (in fact, Smith and Antonov grimaced at the term), the world conjures elements of Victorian-era London and A Clockwork Orange. The gang leaders wear bowler hats, citizens’ wardrobes reflect early-20th century Ireland (think Gangs of New York) and the city-streets are reminiscent of 19th century Europe metropolises while containing aspects of futurist technology. During pre-production, the game was to take place in London which explains why the city of Dunwall feels tangible.

“If you start somewhere real, it feels real,” Colantonio said.

Although the game uses the Unreal 3-engine, it is modified enough to convince you otherwise. The world of Dishonored, made mostly of water and small port towns, is brought to life with grey and cool colors. It looks like a gorgeous, life-like painting, fading away in decay. As someone who hates the look of 99-percent of Unreal 3-engine games, I sure like how this one looks. I also appreciate the minimalist HUD that disappears when not needed.

“We love making places that feel like people lived there,” Smith said. “Every screen feels hand-crafted.” 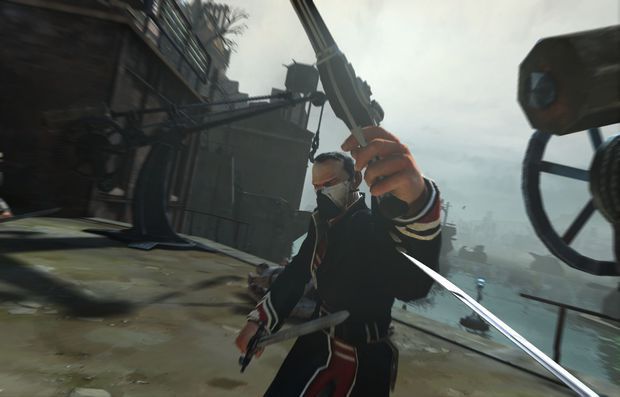 By merging the best elements of late-90s PC gaming with that of recent years, Arkane may very well have paved the path for something special. It’s a disservice to say the game combines the best elements of Half-Life 2, Thief and Bioshock, because that makes it sound like Arkane have been splicing up a Frankstein of a game.

What Dishonered is, is the work of auteurs. Artists who don’t comprise or settle for less than what they want to play. The passion and influences of the men at work on this title shine through in every detail of the world and combat. The influences bleed into Dishonored along with Antonov, Colantonio and Smith’s past projects that they carry with them, consciously or not.

What makes me happiest about Dishonored’s showing at QuakeCon is that it clearly was a slice of a functional game, and not some polished to death demo that left me clueless as to how all the pieces fit (*cough* BioShock Infinite *cough*). I can’t say enough good things about what I’ve seen of Dishonored and I can’t wait to see more.