Strangers in a strange land

We’ve slayed ancient warriors, sand pirates, and testosterone (possibly steroid) overloaded bikers. So where will the wonderful world of Borderlands 2 take us next? Swamps, of course! While that might not be the most logical conclusion, it is what’s next in Borderlands 2: Sir Hammerlock’s Big Game Hunt.

The first question that must pop into the minds of the Borderlands faithful is, “Another one already?” Well, yes, we are getting the third out of the four planned DLC packs in just a few short weeks, bringing with it all the usual additions: new environments, story, raid bosses, etc. 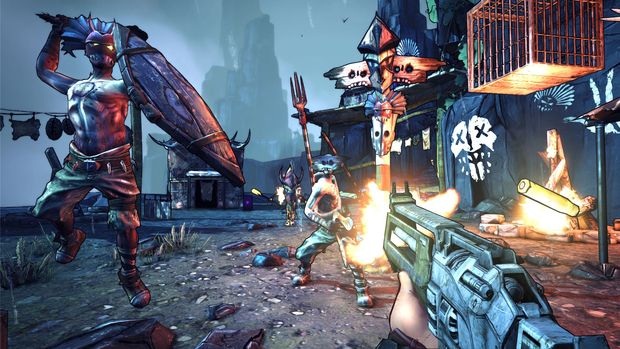 [Writer’s note: The following contains brief spoilers regarding the ending of Borderlands 2.]

The story of Big Game Hunt follows Sir Hammerlock’s journey to the continent of Aegrus, in search of new and exotic wildlife to study, document, and kill. Being that Aegrus is relatively uncharted territory, he invites you, the Vault Hunter, to come along for the ride. The story takes place after the death of Handsome Jack, so you won’t be able to access it until you’ve beaten the main story in Normal mode at least.

Aegrus itself breaks from the series norm with a foggy, swampy environment that stands in stark contrast to the arid deserts environments Borderlands is commonly associated with. Think of the general creepiness of King Kong’s Skull Island, with the relative greenery and fog of Fallout 3: Point Lookout’s swamps, and you have a pretty good image.

When compared to an ancient alien treasure, or a vault that requires the blood of a coward, Big Game Hunt’s premise perhaps doesn’t lend itself to the insanity and hilarity that the series is known for. Still, the characters remain solid. You have, of course, Sir Hammerlock’s wit and highbrow humor juxtaposed to the mindlessness that is Claptrap, in addition to the sole new character in our demo, Professor Nakayama.

A rabid fan of Handsome Jack, Prof. Nakayama is a narcissist obsessed with gaining your attention and recognition as a threat equal, or greater to Jack. He’ll randomly contact you by ECHO to recount tales of how he killed the CEO of the Atlas Corporation, freeing Pandora of their tyranny, and gets increasingly frustrated when you and Hammerlock ignore him. Again, not the most immediately interesting idea for a Borderlands story, but worth a shake. 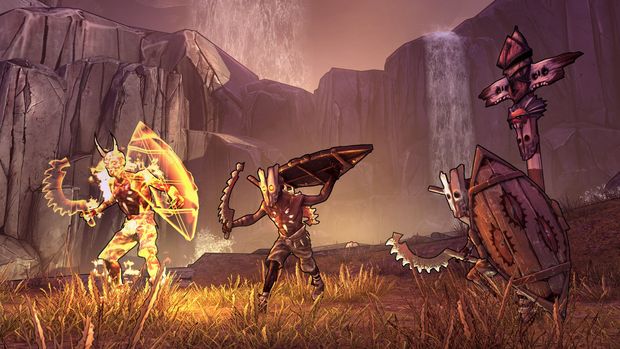 One of the things this add-on gets better than its predecessor is the combat. While Campaign of Carnage‘s enemies were just re-skins of the core game’s enemies, Big Game Hunt bring an entirely new, fresh batch of baddies. The core of combat is spent fighting Savages. If Aegrus is a spoof of Skull Island, then Savages are caricatures of Skull Island’s natives. These guys are fast and ferocious, but aren’t too much of a challenge if you know how to deal with melee-focused enemies.

The real threat comes from the Witchdoctors that accompany them. Witchdoctors can really mess up your day. Acting as a support class, they level up nearby enemies, and not just with more health and strength like a Goliath levels up. Savages buffed by Witchdoctors take on new properties, which can be as simple as gaining an elemental effect, or as as crazy as turning ethereal, in addition to the level boost.

While traditional strategy suggests taking out the Witchdoctor first, you should know these guys are no pushovers. To call them bullet sponges is an understatement. These guys have an insane amount of health, as well as crazy attacks such as crippling your movement, creating wormholes, and transforming into giant elemental tornadoes that deal insane amounts of damage. Aegrus is a dangerous land indeed, with inhabitants just as formidable. The human threat is rounded out with a new supply of creatures as well. The only two I got to see, however, was a giant scorpion creature (think Fallout Radscorpions) that deal caustic damage, and a giant three-legged beast that looks like something out of War of the Worlds. 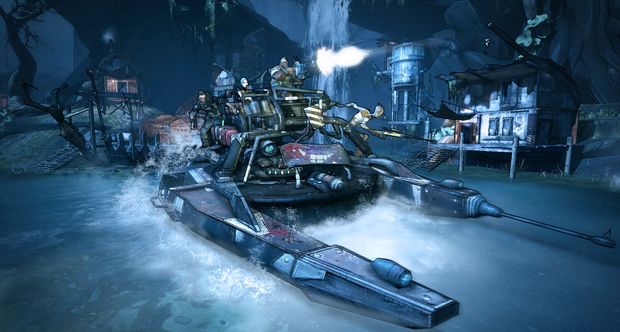 Rounding out the amenities of Big Game Hunt is a new vehicle: an airboat that controls similarly to the sandskiff in Pirate’s Booty, save the fact that it fires elemental weapons such as electric mines rather than rockets. You can also expect new Seraph gear, and new raid bosses, which are all nice additions, but don’t make up for the fact that Big Game Hunt will not be raising the level cap.

I’m not going to lie, that really, really sucks to hear. According to Gearbox PR and marketing manager Adam Fletcher, the level cap raise was not included to give more people time to get level 50 characters, which, according to the data they have been getting from their Shift service, isn’t a whole lot.

Fletcher also stated that Gearbox has not locked down details on whether or not the level cap will be raised with the next DLC pack, so hell, my fingers are crossed that the cap gets raised with a simple update. It’s a far-fetched dream, to be sure, but as I’m sitting on two level 50 characters, with one more almost there, I would take anything at this point. Level cap grievances aside, I am genuinely excited to see how this one turns out.