So admittedly I am not the most versed in the annals of the Battlefield franchise. I’ve dabbled in its different iterations from 1942 to Bad Company 2, but I would far from call myself a diehard fan of the series.

Regardless of that, one thing I know about Battlefield is Wake Island is one of its most iconic and epic maps. Those Battlefield 3 screens of Wake Island look amazing, but before we are graced by DICE’s latest, the Play4Free little brother of the series, Battlefield Heroes, will be unleashing its take on the legendary map today. 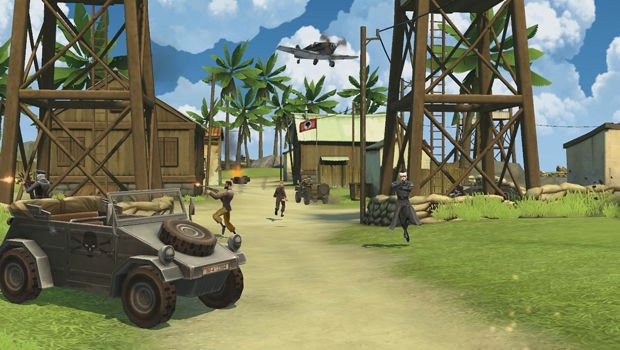 Dropping into Wicked Wake (Heroes take on Wake Island) for a brief tour of duty I was greeted by the calm relaxing sounds of waves crashing on shore. Just listening to the harmonious ambiance, made me want to be face down on massage table. It doesn’t help either that Battlefield Heroes bright, cartoon style visuals provides such an inviting paradise for a little summer vacation. But hey this is Wake Island, not Gilligan’s Island.

I learned (remembered?) a couple of things quickly once the action got started. One; it doesn’t matter what Battlefield game I’m playing, getting in any kind of aircraft is a recipe for disaster. Two; nobody should attempt riding on my wing if they want a chance of surviving for more than ten seconds. And last but not least, I’d better make sure my character is properly equipped, because it doesn’t matter how crafty I am with a knife or sniping rifle, I will never take down the bastard with the minigun. 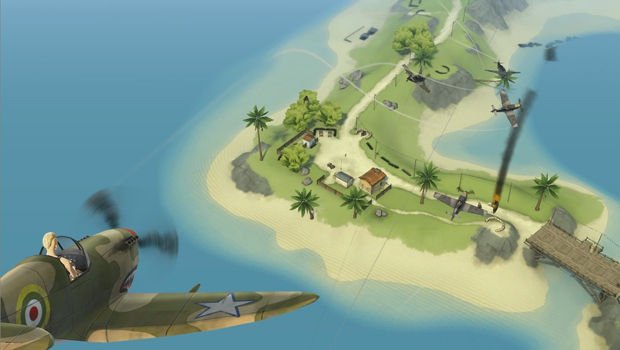 Outside of my ineptitude with a knife, taking capture points and (my favorite) running fools over with a jeep easily provided a good time with my hands-on. The classic design, strategy and all around enjoyment of this map transition quite well into Heroes. Planes (if you’re not me), tanks and AA guns litter the main island and provide all the chaos needed for blowing stuff up. Sniping towers, bunkers and all the classic choke points keep the same vintage tactics that Wake Island is known for alive. It really goes a long way to say just how much good map design can make up for mediocre gameplay.

Whether you love Battlefield Heroes, hate it or like me fall somewhere in the middle it’s pretty apparent why Wake Island is such a legendary map for the franchise. Fans of Heroes are in for a treat when the Wicked Wake map goes live, but even if the third-person take on the franchise isn’t your cup of tea it’s at least worth a look until Battlefied 3 lands on October 25. Why not? It’s free.