In the heart of the Dutch city of Utrecht, in a building filled with the dreams of indie studios trying to take the world by storm, you can find the office of Ronimo Games. Its goal? To bring a 2D MOBA (Multiplayer Online Battle Arena) experience to the consoles’ downloadable space that to date has been reserved for PC titles like League of Legends, DotA, and Heroes of Newerth.

Awesomenauts is meant to give us an accessible, fun, and addictive 3 vs. 3 multiplayer game that is easy to pick up, while still offering enough depth to make you keep playing it until you hear those pesky birds wake up. After close to two hours worth of playtime with the developers, it looks like they are on the right track.

If you’ve played any MOBA game before, you’ll be able to jump right in. If you haven’t, Awesomenauts is a game where up to three players try to push forwards from the team’s Drill Core with ever-spawning mobs (small units) on their side, past defensive towers on either side of the map, and towards the enemy team’s Drill Core that must be destroyed. The result is a tug-of-war style of gameplay that players might on some level recognize from Ronimo’s Swords and Soldiers, but wildly different.

Control-wise, everyone who has played a couple of video games over the past years won’t have any trouble getting the hang of playing Awesomenauts. Two face buttons are reserved for jumping and attacking with your hero’s default attack, another two face buttons execute one of the hero’s two special abilities. Holding the right bumper lets you teleport back to the shop to heal up and to spend the money you earn throughout the match.

You don’t need to be a maestro at keyboard and mouse micromanagement or a pro at 2D platformers to do well in Awesomenauts, although being skilled in 2D games sure doesn’t hurt your chances of winning encounters with enemy heroes. You can shoot in eight directions to get rid of flying enemies or just to annoy people from a platform above. Default attacks have a limited range, however, so don’t expect to just keep mashing the attack button in the hope you’ll hit something off-screen.

Abilities don’t cost mana, as mana doesn’t exist in Awesomenauts. Instead, each ability just has its own cooldown. If you want, you can view the ability’s full stats in detail and go nuts on creating expert builds that fit your tastes — the accessible and arcade-y surface of the game only masks deeper layers for those willing to delve into them. 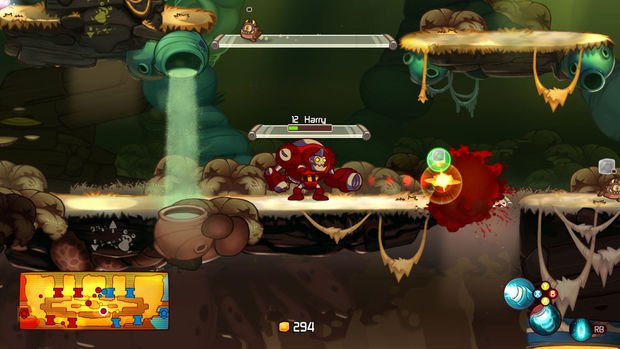 Each of the six Awesomenaut characters is diverse to play and fits multiple roles. A dedicated healer character, for instance, has no default attack but heals in the direction you’re facing. Special abilities do allow him to dish out damage, so he’s not entirely passive. The chameleon character is your assassinating ganker, who can upgrade his stealth ability to leave a clone of himself in place as he activates his stealth; upgrading your clone will also allow it to move around and start attacking enemies for damage.

Cowboy character Sheriff Lonestar is your ranged support class with the ability to throw sticks of dynamite, but should you get stuck in close quarter combat then you can use his other ability to summon a giant holographic bull that pushes away and damages all enemies in front of you. The tank character is beefy and slow, and can sacrifice health to do a self-destruct attack for massive damage which is triggered instantly if you get killed while the countdown for it is ticking — a great low HP revenge tactic.

Each character has six upgrades you gradually unlock in four different categories: the primary special ability, the secondary special ability, default attacks, and a category for things like increased health, movement speed, and income. You can select up to three of these upgrades from each category in order to buy them at a level’s shop once you’re in-game, meaning every character can be fully customized to create a lot of different builds to fit your playstyle.

If you are entirely new to the MOBA genre, don’t despair. A quick but solid tutorial gradually guides you through the core gameplay aspects and, as you start out at level 1 and bots scale to your level, you should have little trouble getting the hang of both the gameplay, characters, and the level layouts. 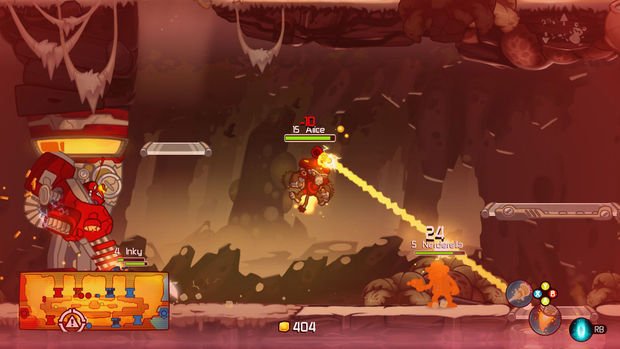 Instead of a more traditional XP and Gold system, Awesomenauts revolves around obtaining Solar (the game’s currency) and keeping your health in check. Killing an enemy hero will net you a nice amount of Solar and also provides a slightly less amount of Solar for your two team mates wherever they are. If you are a support hero or just playing terribly, you’ll still be able to rack up money for upgrades to even the odds despite not participating in direct kills.

The amount of Solar collected by killing enemies, as well as by simply collecting the Solar coins that dot the map, is reflected in a hero’s level by an indicator above his head. At the end of a match, you are rewarded XP depending on your performance and whether you won or lost the match. This XP lets you level up and unlock new upgrades. Playing in singleplayer is an option for those without online access, although it will give you less XP per match, and the bot AI is nothing to sneeze at either — they held two developers and myself at bay for quite a while.

Since this is in essence a game made for online play, playing it online will reward you with a boost to the XP you gain and playing split screen yields an even bigger boost. Awesomenauts supports up to three players in split screen local co-op, with the fourth quarter of the screen displaying a map of the level with the active turrets, mobs, and players. It works well, and the smaller screen space doesn’t hurt the gameplay in the slightest. 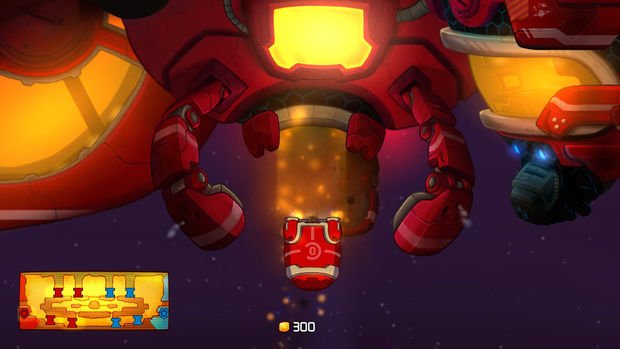 The three different maps allow for different tactics and each map has its own visual style, layout, and little touches to set them apart in terms of gameplay. One map has a bridge with a lot of Solar on it to lure people in, but another player can jump on a button to make a Sarlacc Pit type of monster pop up and eat whoever is unfortunate enough to be standing on the bridge. Elsewhere in the game you’ll find a storage box for up to three flying mobs that spawn inside of it, which can be unleashed by pressing a button when it makes tactical sense to do so.

On a visual level, these touches permeate each map as well. Walking on pads on the ground will make them light up, the visuals reflect different areas of the map, etc. To give you something to do while you spawn, part of the spawn time goes into a space drop sequence during which you can pick up Solar on your way down. Like in a MOBA game such as League of Legends, you’ll also find “jungle creeps” in certain areas of the map. These creeps don’t give you any Solar, although Solar coins do spawn around there, but instead killing these creeps gives you all-important health.

Since you can’t buy health potions, the only way to heal yourself is to either walk or teleport back to the shop, get healed by a dedicated healer character or by a different character that has a minor healing ability, or by killing these creeps and grabbing health items that are strategically placed throughout the map. Because death gives the opposing team a boost in Solar, notwithstanding the time it takes to get back into the fight, keeping an eye on your health is of prime importance.

Beyond the pretty awesome music that matches the over-the-top 1980s style that pervades the game, each character also has its own theme song that starts playing when it gets a kill spree going. Kill sprees don’t give you extra Solar, you just get an awesome theme song as a reward. Amazing. 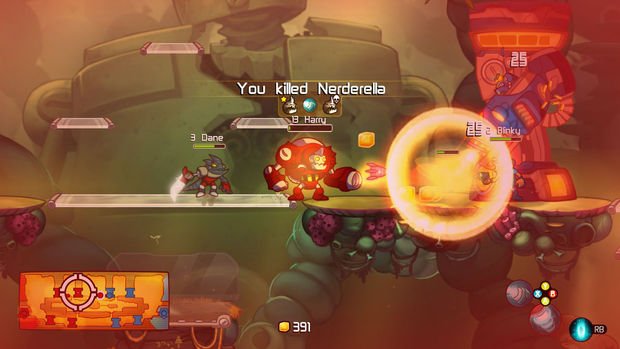 I went into Awesomenauts not really knowing exactly what to expect from a 2D MOBA game. If anything, I learned that simply imagining it as League of Legends in 2D doesn’t do it justice in the slightest. It threads a fine line between arcade action and the more hardcore depth to support it, with the result being a fun game that’s easy to pick up and hard enough to master.

The 3v3 aspect of the game will probably make it less of a hassle to get a game going as quickly as possible, made easier by the drop-in/drop-out aspects of online play. If you don’t want to talk to randoms, the d-pad gives you access to four voice commands. Matches are meant to last about 15 minutes on average — longer if the opposing team is equally skilled or defending heavily — and from the looks of it, it will make for a great game to play for a couple of rounds without having to commit yourself to hours of online play.

Whether or not you will end up spending dozens of hours on Awesomenauts will depend on the amount of players online during and after launch, but even against the AI bots this game is shaping up to be worth its name. Ronimo will be working to support the game post-launch by adding new Awesomenauts to the already well-rounded roster, so the chances of getting tired of this game are pretty slim — as long as the seemingly good balance that’s in place right now will stand the test of time.