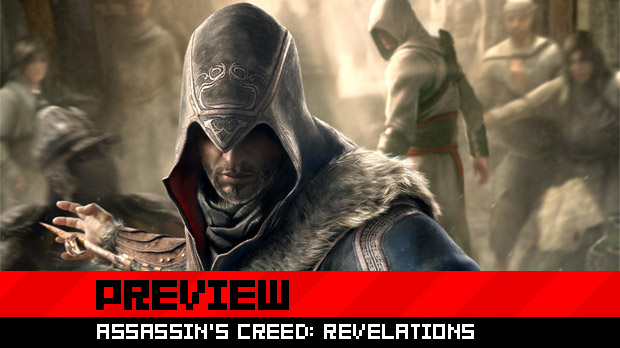 Assassin’s Creed: Revelations — which will finally end Ezio’s story arc — is almost upon us. Before we close the chapter on him, however, we’ll have the chance to see how Ubisoft has further refined the series’ gameplay after Assassin’s Creed: Brotherhood.

Ubisoft showed more of the combat mechanics at gamescom and delved into exactly how Altair’s missions actually fit into the world of Revelations.

Following a carriage chase sequence, Old Ezio gets blasted halfway off of a ravine by Leandros and his troops — he’s the Templar Captain featured in the Assassin’s Creed: Revelations E3 trailer. With the blood of assassins running through his veins and hell-bent on reaching Leandros, Ezio makes it to a fortress town in order to get a “key” from the evil Templar.

Fighting off guards with the regular combat is mostly unchanged from Brotherhood. Attacks, chains, and counters look like they could’ve come from one of the past two games, but final blows have received a few animation upgrades. Ezio will jab his sword over his shoulder to stab someone in the neck, and finishers have a more cinematic feel to them thanks to a camera that gets right into the action.

Because of his unfortunate fall, though, the Renaissance Era Adonis enters combat half dead. After dispatching with the opponents between him and an opportunity to heal up, Ezio mutters “this used to be easy.” He is so old. 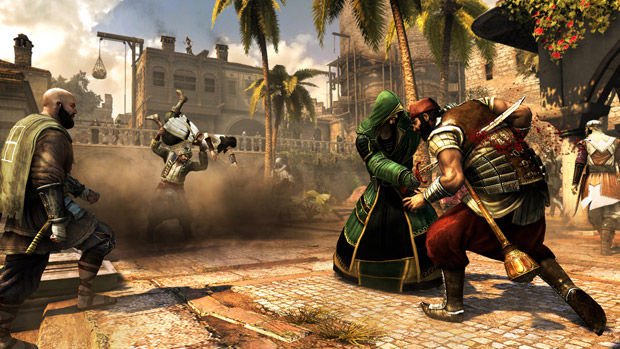 Bombs are added to Ezio’s armory in Revelations. These can be thrown similarly to Brotherhood‘s secondary weapons in multiplayer. But because very few people found this out, this will be properly explained this time around. You can also craft bombs using materials you find in chests and looted corpses — similar to finding armor components in Brotherhood — and fit them in one of three bomb-creation component categories.

Shells hold a bomb’s gunpowder and specific ingredients that add effects to the bomb. An Impact Shell will simply explode on, you guessed it, impact. An other type of shell will have a time-delay fuse to allow players to put some distance between themselves and a diversionary bomb.

Gunpowder defines the area of attack for the bomb. This is no case of “the larger, the better”: these bombs can also kill or injure civilians and yourself. Lastly, specific ingredients can turn a bomb into things like an explosive grenade, a smoke bomb, or a caltrop bomb. 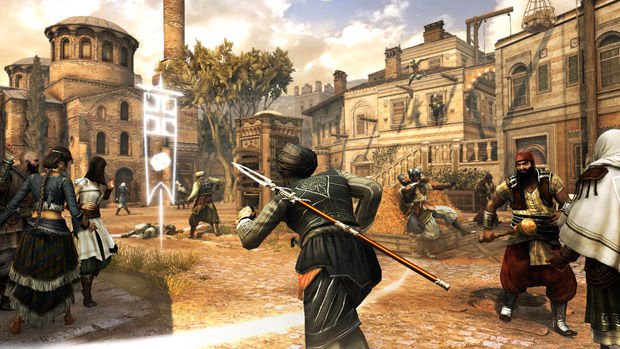 Because there are so many different bombs to choose from, a secondary weapon wheel is now available for bombs. The regular weapon wheel still resides on the left side of the screen, but on the right side are your bombs, sorted into lethal, tactical, and diversionary categories.

The lethal explosive grenades that go off on impact can wipe out incoming groups of soldiers with ease if you get bored with the combat. Another way to be a bastard is to set a tripwire bomb at the corpse of a guard, killing whoever calmly comes over to check why there is a suddenly a corpse lying in the street.

But for players who like to play with their prey or shift guards away from their posts and paths, you now have more tools at your disposal to set off time-delayed noises and the like. If you don’t want to hurt civilians, you can throw a caltrop bomb that makes pursuers stop in their tracks without killing or injuring anyone. 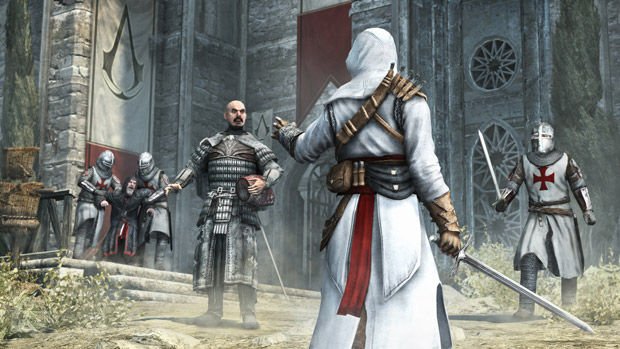 Following the events in Brotherhood, Desmond enters in a coma and is put into the Animus to keep the memories of all his ancestors from flooding into his consciousness. The Animus keeps him sane and safe from the “bleeding effect” and allows him to access other memories than before. Not just the weird “Animus non space” that Desmond traverses in his mind, but also those of his ancestor Altair.

Eagle sense in Revelations doesn’t just show the friendly and enemy characters. Some key quest characters can be tracked through memory, showing them moving along the path they once took, over and over again. This way you can find where you’re supposed to go if you are tracking someone’s past movements to a location.

The key that Leandros held is actually a piece of tech from Those That Came Before, a form of memory data disc. Altair found five of these artifacts, and imprinted his own memories on them as lessons to those who would find them. During the game, Desmond can go back and play as Altair whenever Ezio finds one of these devices — although it’s really the player controlling Desmond in his memories of Ezio who shifts to Altair. 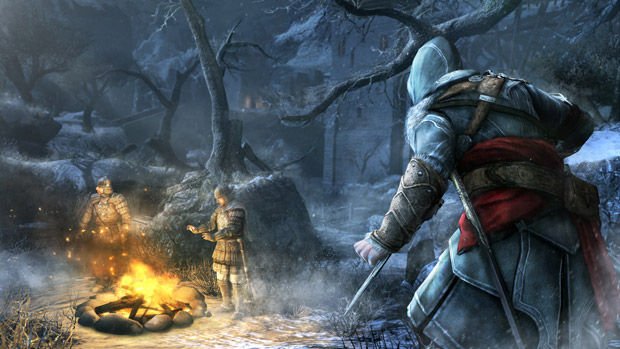 The Subject 16 puzzles will return, albeit in a different form. Ubisoft didn’t want to say too much about this yet, but given the past games I wouldn’t be surprised if they showed that Abstergo was behind the current financial crisis.

All in all, Assassin’s Creed: Revelations didn’t look like a massive revelation. The new bomb system is interesting and should help diversify the gameplay — and Ezio can climb walls and use his new hook to get around the city more efficiently — but the combat is mostly the same as before,

More than anything, Revelations seems better than the last Assassin’s Creed. And to Ubisoft’s credit, they have been able to improve and tweak the formula with each entry in the series. We were promised that the final moments in the new game would be even more dramatic than we’ve seen before, and perhaps after three games with the same protagonist to connect to,  that’s not too far-fetched to imagine.