For those not familiar, A Game of Dwarves is a PC strategy game built in the same vein as Dungeon Keeper, taking more than a few pages from the classic strategy-based god games of the 1990s, with helpings of Sim City and Minecraft throughout. An interesting combination both in theory and in practice.

It hasn’t been very long since we first saw A Game of Dwarves, or even our first hands-on session, so be sure to catch Casey’s preview for the basics. This go around, we did get a peek at the game’s morale system and a quick tease of the research tech trees. 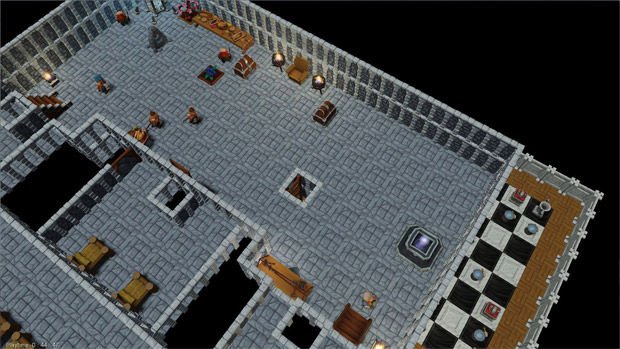 The core of Game of Dwarves revolves around the same genre tropes we’ve touched on before; it’s all about base building and resource management. You start off with a basic dungeon, then work to expand your area with blocks, giving you more room to farm, research upgrades, etc. New to this demo, however, was Game of Dwarves’ morale system.

Until being attacked by the mages and having all their possessions robbed of the them, the dwarves were a happy tribe of people. As their leader, it is now left to you to help them keep their spirits up. To help you manage this is a morale system. It’s fairly rudimentary, but works well enough in accomplishing its goal. Basically, there is a meter in the top middle side of the screen, letting you know where exactly you stand with the other dwarves.

If it’s far into the green, workers build faster, researchers upgrade your dungeon quicker, and warriors will be more effective in battle. Let it slide into the red, and your operations will start to slow down until eventually coming to a crawl. It can get worse, too, with the dwarves mounting protests and going on strike until some get fed up enough to leave entirely. If you don’t want to negate hours of progress, make sure to keep all your dwarves happy. More than just a motivation to not slip up, the morale system seems to be shaping as a core mechanic, bleeding into other facets of the game, such as the tech trees.

The leveling and tech tree system in Game of Dwarves is fairly standard: you research items and build equipment to accrue points, which you then invest in skills to research better items and equipment for your dungeon. The morale system enters the fray with the quality of content that your dwarves are given.

At the start of the game, you can only build the basic variants of each item. Stone beds rather than feather, iron armor rather than steel, apple trees rather than beer (yes, beer). The faster you upgrade your ability to craft better items, the faster you can get them to your workforce, making them happier and allowing you to work them harder.

There definitely seems to be a lot more going on in Game of Dwarves than time permitted us to see; I certainly would like to take another crack at it for a longer period of time. Those with any affinity for the strategy and god games would do well to keep an eye out for this one.