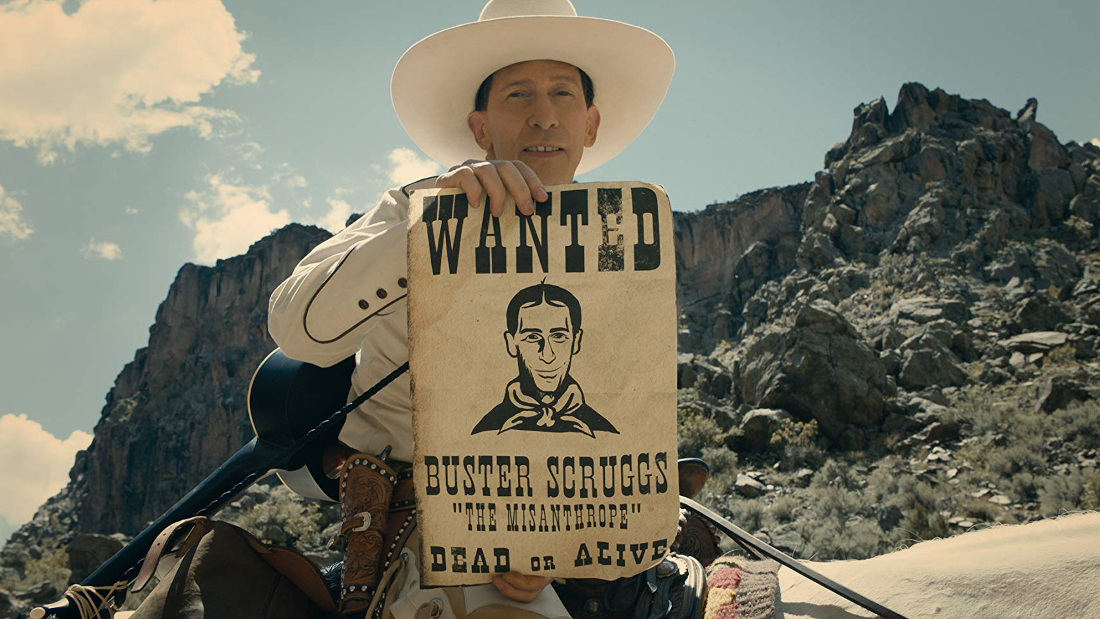 Them Coen brothers made a buncha rootin’ tootin’ western subgenre homages, yessir, if that be yer tonic

Like Hail, Caesar!, The Ballad of Buster Scruggs is a movie about movies. Hail, Caesar! took the tropes of the old-fashioned studio pictures and turned them into an interconnected backlot pastiche of cinematic styles. You had composites of real-life figures and homages to bygone genres, all playing out on a kooky, scale-model version of Hollywood. I still feel like that movie would have benefited from being a series rather than a feature—the world the Coen brothers built was bigger and richer than the runtime.

The Ballad of Buster Scruggs, which had its North American premiere at the 2018 New York Film Festival, gets around some of these problems by embracing the anthology form. The six short films that comprise the movie are discrete, with no attempt to interconnect them. Each short inhabits a specific western subgenre, creating these self-contained, visually and verbally distinct cinematic worlds for each story to play out. There’s a Gene Autry singin’ cowboy story that embraces and subverts that form. There’s a John Ford-style wagon train epic about the clash between frontier life and domesticity. There’s even a short that’s a little like Robert Altman’s classic revisionist western McCabe & Mrs. Miller, with the same icy, transactional notions about relationships.

Your enjoyment of Buster Scruggs will depend entirely on your love and knowledge of westerns.

The strongest two stories in Buster Scruggs are the title short and a gold prospector tale starring a shaggy Tom Waits.

First, let’s talk about Buster Scruggs, which could have been an incredibly fun, violent, surreal, slapstick musical feature film. Buster, played by a brilliantly folksy Tim Blake Nelson, is an outlaw singing cowboy. Though he wears all white and carries himself like a hapless goofball, he’s got a dark heart. The man’s nicknamed “The Misanthrope” for a reason, one of many sobriquets mentioned. He’s a crackshot with his six-gun, planting bullets square in the middle of foreheads before twirling his iron back into the holster. Nelson has always been such a reliable supporting player, and I wonder what he could have done had Buster Scruggs been a feature film. There is a tinge of psychotic in his swift and melodious elocutions.

The Tom Waits prospector film is much different, which shows some of the strengths of Buster Scruggs as an anthology. Each film is solid at situating its characters in spaces and having these locations inform the short as a whole. While the Scruggs short is speedy and talky and set in dusty western environs that look like chintzy tourist traps, the prospector film is just Waits alone grumbling to himself in the vast splendors of a green valley. The local animals retreat at his presence as he enters to pan for gold, and there’s a lush visual poetry about every small gesture as he seeks out little shiny specks in the mud by a river. Admittedly, like your love for western conventions, your love for this short may depend entirely on your love for Tom Waits. 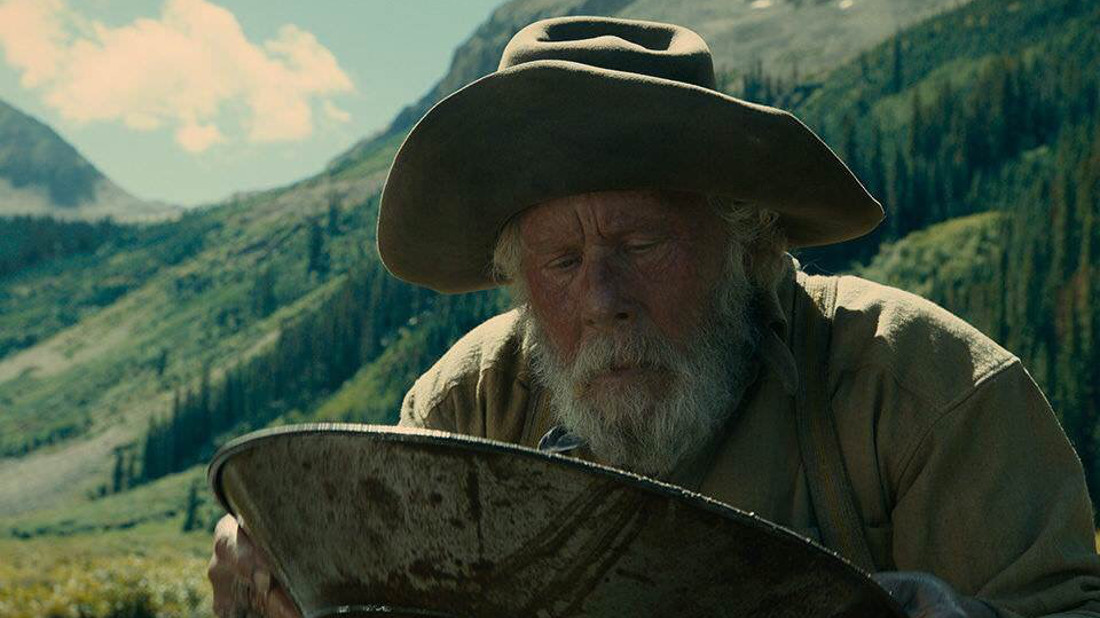 The other shorts vary in quality. The Liam Neeson short with shades of McCabe & Mrs. Miller is perfect for that length: a traveling wagon with a limbless man reciting poetry and politics to a dumbfounded, huddled mass. The James Franco short has shades of Sergio Leone by way of Looney Tunes, but feels like a sketch rather than something fully realized. The closing short feels like an Ambrose Bierce horror story by way of The Twilight Zone. It almost works, but the action is confined mostly to a carriage, and by the end feels like a protracted opening act to a story. The John Ford wagon train epic is the penultimate short, and feels the longest. There’s a quiet meekness about the interplay between Zoe Kazan, a young woman of delicate constitution, and Bill Heck, a rugged fella looking to settle, as they snake from parts eastward to Oregon.

That John Ford homage works if you love big sky vistas and are patient with how the Coens explore and poke fun at the extreme manners in cinematic western courtship rituals. It can drag, but I think it’s by design, like a long joke where the set-up is better than the punchline. Heck and Kazan slowly intimate their feelings, but only at the surface, and they are so shy about expressing even the slightest hints of fancy. Dating, even on the trail, can be awkward. Meanwhile, Grainger Hines (a real name that is also a great cowboy name) plays a rugged old-timer who ain’t got time for this mushy talk about a-lovin’ and a-settlin’. This rugged old cowpoke grunts and yups about anything not related to life on the trail. Here is the cowboy movie clash of wedded domesticity and the freedom of rugged individualism in three archetypal characters.

Of course, if there is a wagon train in a movie, there is going to be a clash with Indians. (This is a literary device known as “Chekhov’s wagon train.”) Rather than interrogating the colonial mindset and racism of the time, the Coens just adhere strictly to the sensibility of John Ford and his undaunted manly men of manifest destiny. The choice is by design, though it may upset some people; I admit that I was a bit taken aback by it because it’s something from a bygone era. In context, it works as a recreation of a pervasive sensibility in classic westerns and completes the cinematic homage; out of the context of homage, it might be viewed as a reification of the racist past that conquered the frontier and murdered millions of indigenous people in the process. 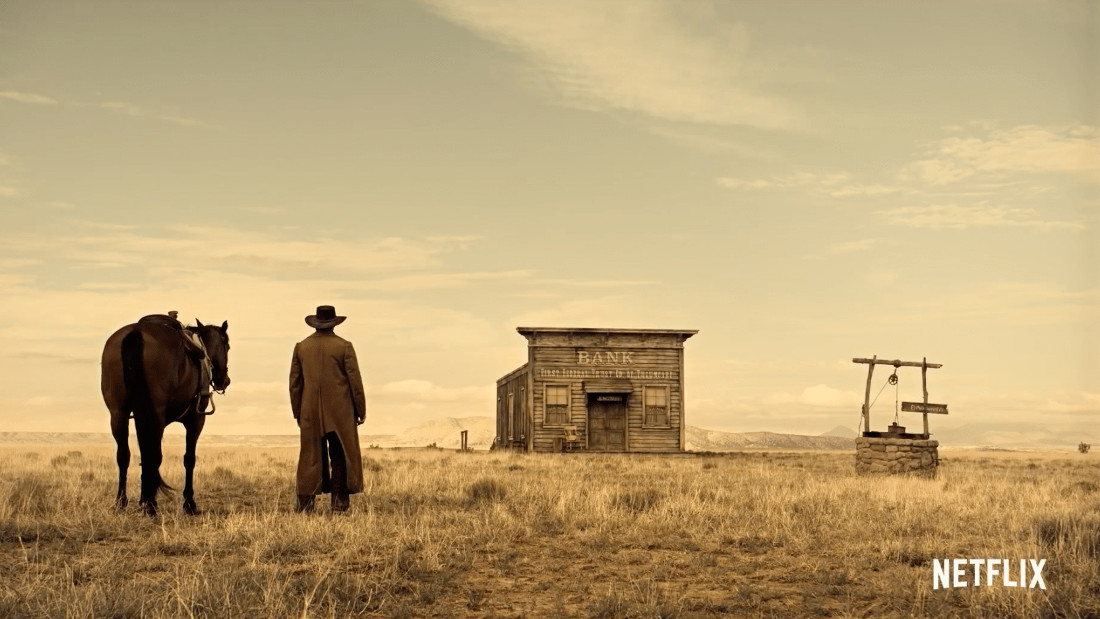 I can dislike the worldview but love those majestic westerns since the depiction of a cowboy in that time and place is not an endorsement of his worldview. It adds authenticity to the homage on different levels. But even still, Buster Scruggs is a pastiche of western styles that often subverts familiar tropes, such as the homicidal singing cowboy that movie is named after, or the rituals of courtship mentioned above. Why not satirize this other element of the cinematic western? Could the Coens have had a movie from the side of Native Americans? Is that even a story they would be interested in or even capable of telling? How fitting that a John Ford pastiche engendered similar (though smaller) feelings as the ones I felt watching The Searchers: I like this, but gosh, the movie is like listening to a racist grandpappy.

As a whole Buster Scruggs may not feel quite cohesive. It has its ups, downs, and lulls just like any anthology film. The closing short isn’t as strong as the opening one, and maybe one more wacky story toward the end would have helped with sequencing a more satisfying anthology. It might be impossible to make a perfect anthology. The Coens spoke about sequencing the shorts of Buster Scruggs chronologically as written, but were also thinking of how albums are put together song by song to complete a whole. Like most albums, there is bound to be a song you want to skip. I wonder if a filmmaker will, someday, make the anthology film equivalent of Revolver or Raw Power, or if that is even possible.

Gripes aside, I still enjoy the odd varmint that is Buster Scruggs for what it is. It works as a Netflix release, which is an odd thing to say about a Coen brothers movie. You can play at your leisure as you stream, and like an album, you can skip to the parts you like most. Netflix has given the Coens the creative and financial freedom to do what they want, and the result is something that no one in their right mind (except for Netflix) would fund. The Coens done made a jackalope. Swig of brown liquor to ‘em for the gumption.