Thinking about the opening shot of Roma brings tears to my eyes. The centerpiece film at the 2018 New York Film Festival is a masterful display of Alfonso Cuaron’s craft, and how the magic of filmmaking can situate the mind in a specific time, place, mood, and way of life. We first see diamond-shaped tiles in a driveway as we hear sweeping and the sounds of a street. The credits are displayed over this tableau. Water splashes across the tiles—ah, the sweeping, someone is cleaning—and we see a reflection of the sky confined by the shadows of the rooftops as an airplane roars by. Eventually the camera pans up and we get a sense of the world we’ll be inhabiting, presented in the manner that the mind drifts through a memory. Reading this description makes it sound so innocuous, but to see it and hear it is transfixing and transcendental.

In fact, thinking about many sequences in Roma brings tears to my eyes. I was describing one scene in a hospital nursery to a friend, and even though I was vague about what happens, I got misty. The moment is unexpected yet perfect. Roma is an intimate human movie about class, family, and women making their way through life, and yet it has the elements of a period epic about Mexico in the early 1970s. For instance, we see a woman walking along muddy planks in a Mexican town without roads, and then a human cannonball courses across the background at the end of a political speech.

How can a movie contain so many surprises? So much life?

Roma is one of the most breathtaking movies I’ve seen in 2018. (And I’ve seen plenty.) Cuaron has made another masterpiece. Not only is Roma my favorite movie of the year, it will likely be ranked as one of the best movies of the decade.

Drawing from memories of Cuaron’s own childhood and interviews with his real-life nanny, Roma centers around Cleo (Yalitza Aparicio), a domestic servant for an upper-middle-class family. The movie is named after the Mexico City neighborhood where most of the action takes place, a bohemian area that attracts young people and artists. Cleo is endlessly patient and kind, acting as a second mother in the household while Sofia (Marina de Tavira) deals with her crumbling marriage. She toils without complaint, finding joy and contentment where she can and whenever it comes.

Perhaps Cleo is faultless to a fault, but I think that’s the nature of memory and nostalgia at work in Roma. When thinking about people important during our formative years, there’s a tendency to overlook their flaws and think about them in the best possible light. Considering the film in terms of class, Cleo becomes a cipher for any domestic worker and hidden figure that makes life easier for others. They shouldn’t be kept out of sight, which they often are in movies. Another film could have framed its narrative around the children or the mother. Roma wants to give attention to someone whose story is usually ignored but is just as rich and worthy of telling as the countless other narratives unfolding around her. 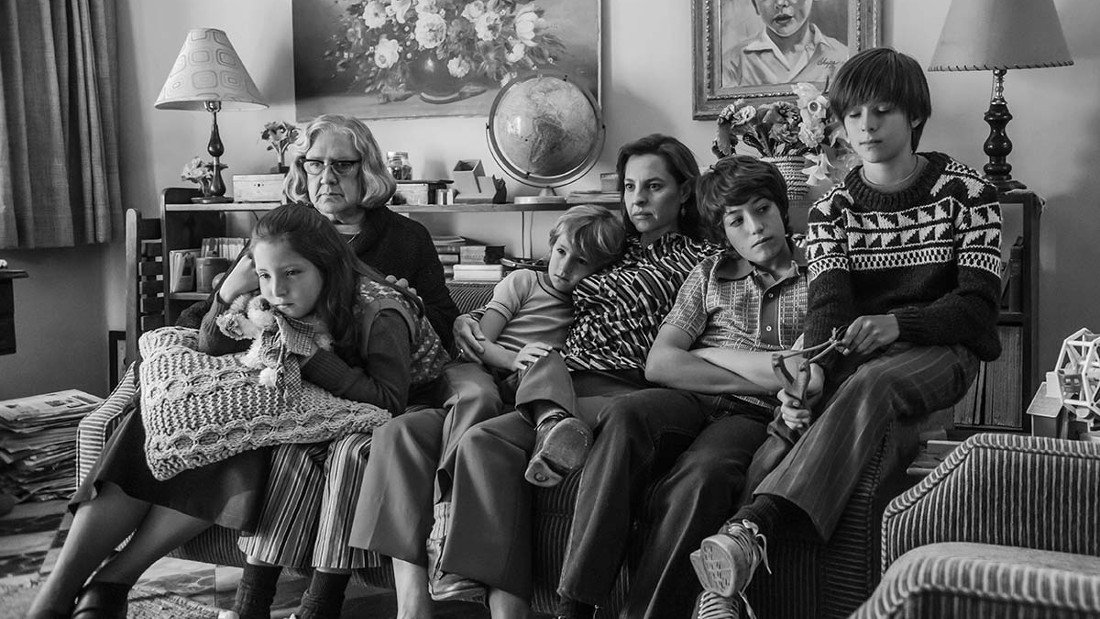 We rarely hear Cleo talk about her emotions or inner life, but it’s effortlessly conveyed by Aparicio’s performance and Cuaron’s cinematography, the latter of which is heavily influenced by long-time collaborator Emmanuel Lubezki. (Lubezki was originally going to shoot Roma but was unavailable.) A lot of the film unfolds in long, uninterrupted takes. Sometimes we witness graceful, meticulous camera moves, other times we sit with immaculately balanced compositions; the shots are always insinuating an emotion. Cleo has a way of gazing at the world around her that reveals the contours of her thoughts. Any time she is on screen, notice the way she interacts with the world and the way that the world acts upon her. Roma is a movie that can speak about the heart without using words.

The camera’s hyperawareness builds the admiration for Cleo and Sofia, and even for Sofia’s mother (Verónica García). These women try to lead lives of dignity given their circumstances, but they are always working within the confines and expectations of class and gender norms. The roles of women are often thankless, especially when children are in the process of growing up. As Cuaron reconsiders these women in his life through Roma, he seems endlessly thankful for their presence, as if time has only deepened his fondness and understanding of their strength. 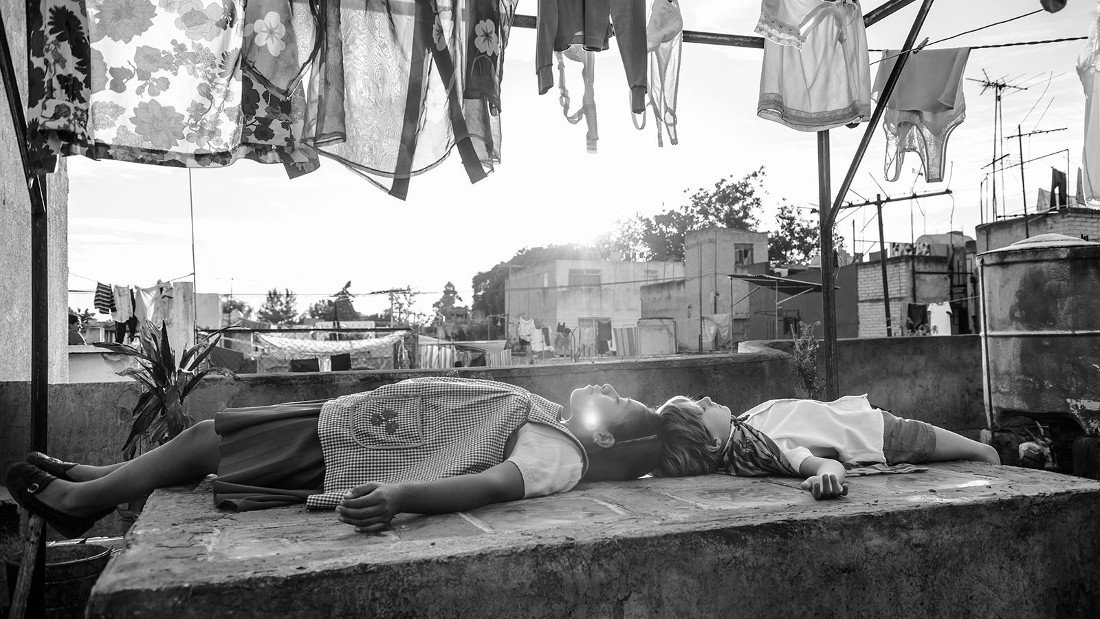 In addition to celebrating matronly figures, Roma critiques antiquated modes of masculinity. Sofia’s husband is a breadwinner; he is also a philanderer and emotionally absent father. Cleo’s boyfriend is obsessed with outward displays of machismo, but like Sofia’s husband, he isn’t there for Cleo when it counts. Sofia is left with an obscenely large automobile, and Cleo is left with an even greater burden. There’s even a bizarre strongman side character who seems to embody all of the silly contradictions of masculinity—think Dwayne Johnson but lucha libre. This throwaway character, like the car too big for the carport, adds thematic texture and injects a welcome strangeness to the film.

There’s a sense of change in the air throughout Roma. On the small scale, there is divorce combined with the hopes and fears of parenthood. On the social scale, we have political unrest building until it boils over. A student protest seen in the latter half of Roma plays out like the dystopian nightmares seen in Children of Men, yet it happens as Cleo and Sofia’s mother are trying to run an errand. There is tumult everywhere and in the everyday, or at least it feels that way to these characters given the state of their lives.

I mentioned earlier that the film is filled with so much life, and it’s sequences like the student demonstration that teem with an orchestrated chaos of existence. The frame is so packed with extras and details, and with actions occurring in the foreground, the background, and just out of frame. It’s as if we have stepped into the moment, inhabiting an extemporaneously unfolding reality. We watch the family, we witness history, and we wander through memory all at once with Cuaron as our guide, at times entranced and others overwhelmed. 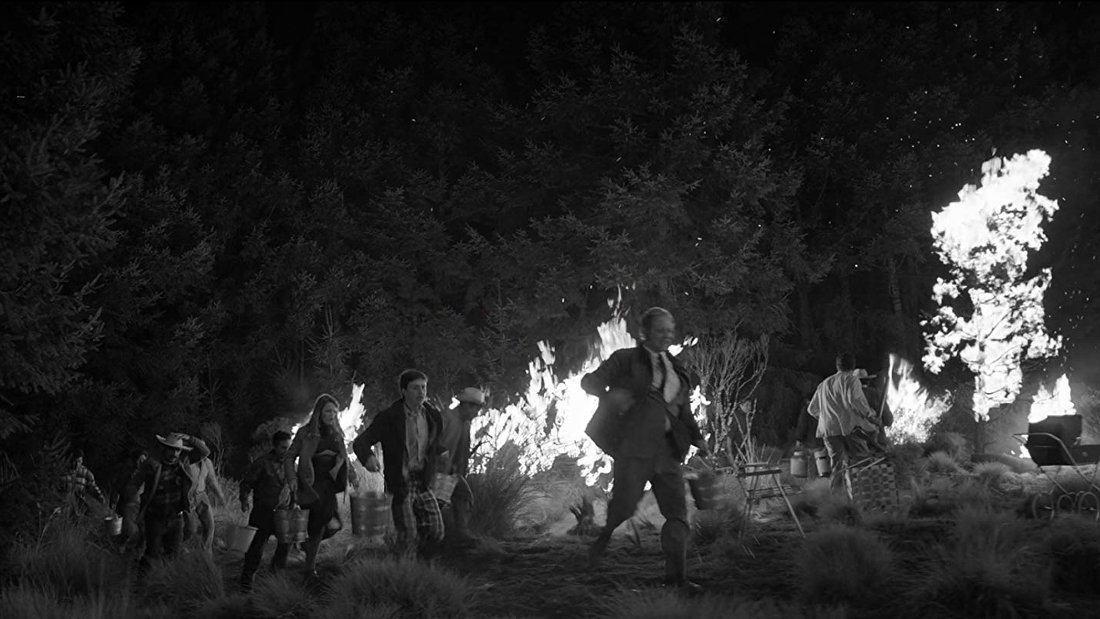 Even though Roma will be available on Netflix, it demands to be seen on the big screen in the best theater possible. The imagery is remarkable, but the sound design enhances the sense of total immersion. Cars honk behind the audience as they speed down an unseen street. Dogs bark at someone passing; a marching band plays; someone’s conversation spills over briefly into earshot, not enough to hear what they’re saying but enough to register that someone else’s life is occurring elsewhere in the moment. It is Proustian cinema, with the senses engaged and ready for memories to flow when prompted. I hope that in addition to streaming, Netflix allows Roma to get a full Blu-ray/4K release just so the film can be appreciated for its masterful beauty in the best quality possible.

I can’t wait to see Roma again. It feels like I missed a lot on first viewing. I think about the New Year’s Eve sequence, where different parties are taking place simultaneously, and each revelry consists of pockets of rich action. Children run amok and get chased by some adult in a monster costume, while down a walkway and a floor below, servants dance and drink as a band plays. Outside these quarters, animals at the estate wander around while two ducks, locked together, are unmistakably having sex.

But back to the party. For a moment I was too busy looking at an extra in the background of a shot who reminded me so much of my own grandmother (nana) that I missed Cleo in the foreground. She was lost in all that wonderful, empathetic human activity, this woman who should not be ignored.