How do you follow up a game like The World Ends with You? It seems like a Herculean task given everything it accomplished. The game brought together Japanese culture, street art, and dual-screen technology in a truly profound way. It was complicated, yes, but in that complication existed ludonarrative consistency with a perfect marriage of story arc, gameplay, and system capabilities. To create a sequel that’s able to match or better this predecessor would almost be a fool’s errand.

NEO: The World Ends with You doesn’t really set out to improve on what’s come before it, though I imagine many will say it is better than the first game by virtue of how straightforward the controls are this time around. Rather than creating a distinct console experience, which you really can’t do with a multi-platform title, it settles for a more homogenized one. The end result is a game that is far more approachable in every facet than its predecessor. But that approachability comes at the cost of the original’s singularity. 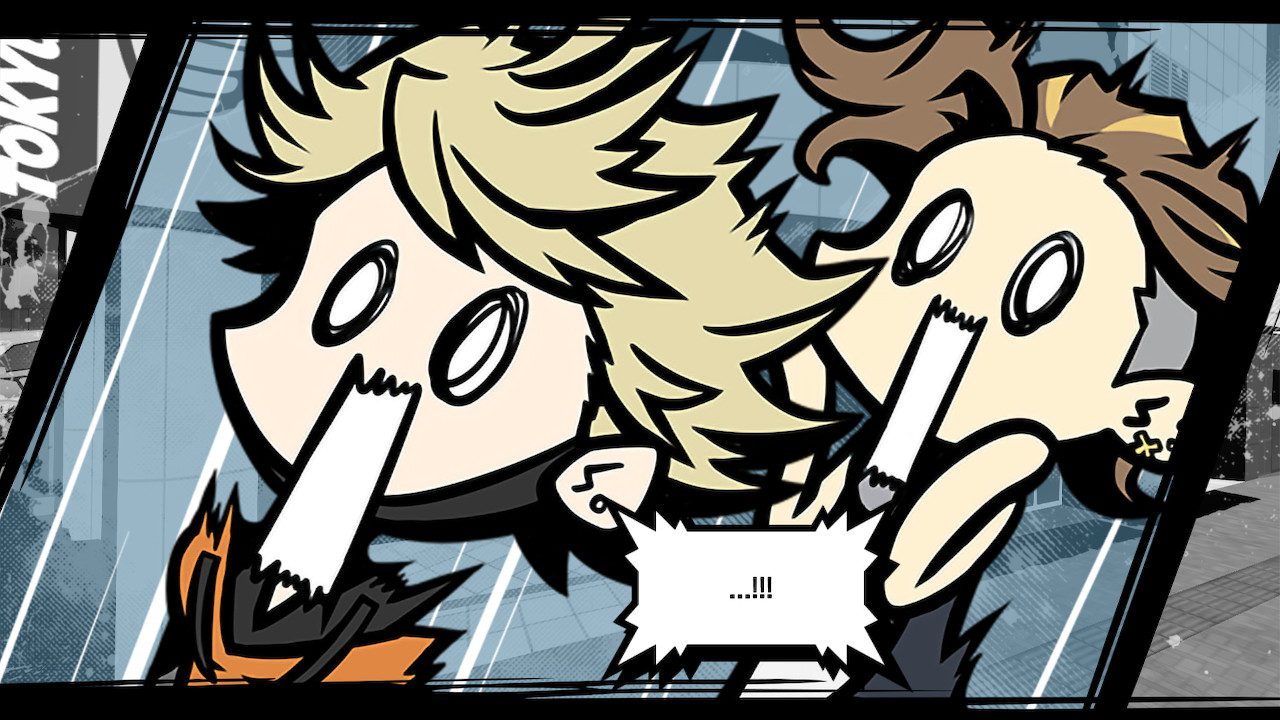 Beating NEO: The World Ends with You is about more than just winning the Reapers’ Game. It’s about understanding the true potential of yourself and your friends and why it is we form attachments to the people and places around us. The opening moments paint a familiar scene of Reapers’ Pins and anarchy on the streets of Shibuya. Protagonists Rindo and Fret are pulled into a game of life and after-death and are basically left to fend for themselves against the Noise with little instruction from the Reapers in charge. The duo is quickly joined by Minamimoto, who returns from the first title, and Nagi, a newcomer who’s obsessed with the mobile game Elegant Strategy, or “EleStra”.

This is the first of many changes from the DS original. This version of the Reapers’ Game uses teams rather than pairs, and you’re no longer playing against the game itself but rather the other teams who are all vying for the top of the scoreboard at the end of the week. Win, and they can leave the game for good. Lose, and they get erased. Fall somewhere between first and last place, and they’re doomed to play the game for another week.

When I interviewed the leads behind NEO: The World Ends with You several weeks ago, they told me the game is named the way it is because it’s a new story that doesn’t rely on knowledge of the events and characters of the first game. And that is true…for about half the narrative. Eventually, characters and story elements from the first title, as well as The World Ends with You: Final Remix’s A New Day scenario, leak into the plot. The story and world as a whole are far easier to parse than last time with exposition doesn’t overload players with too much at once. But those returning from any version of the first game will be better situated to understand the actions and motivations for some of the late-game turns of event.

The developers definitely tried to recapture the spirit of the original by tying story progression to character growth and gameplay. Rindo, Fret, and Nagi each have a unique power they can use to get a leg up in-game. Rindo can turn back time, Fret can make people remember something they forgot, and Nagi can dive into people’s minds to fight the Noise inhabiting them. Repeated use of their powers push forward their character arcs, but because there is very little gameplay input tied to those powers, it really doesn’t have the same effect as Neku Sakuraba trying to bond with his new teammate while players try to understand the sudden change to button inputs for the partner character.

Not only that, but I don’t believe the writers for NEO make the most out of the world they created. There are several story elements here that are under-explored, such as the relationship between Shibuya Reapers and the Shinjuku Reapers who now control the city. Some questions I had received throw-away explanations, and there are a few crucial points of the plot that new players will be asked to just go along with.

The story may not have everything I would have wanted, but what is here is quite good, and the narrative as a whole is boosted by some strong new characters. I have a feeling Shoka, the raven-haired Reaper you meet at the beginning of the game, will end up as a fan favorite. 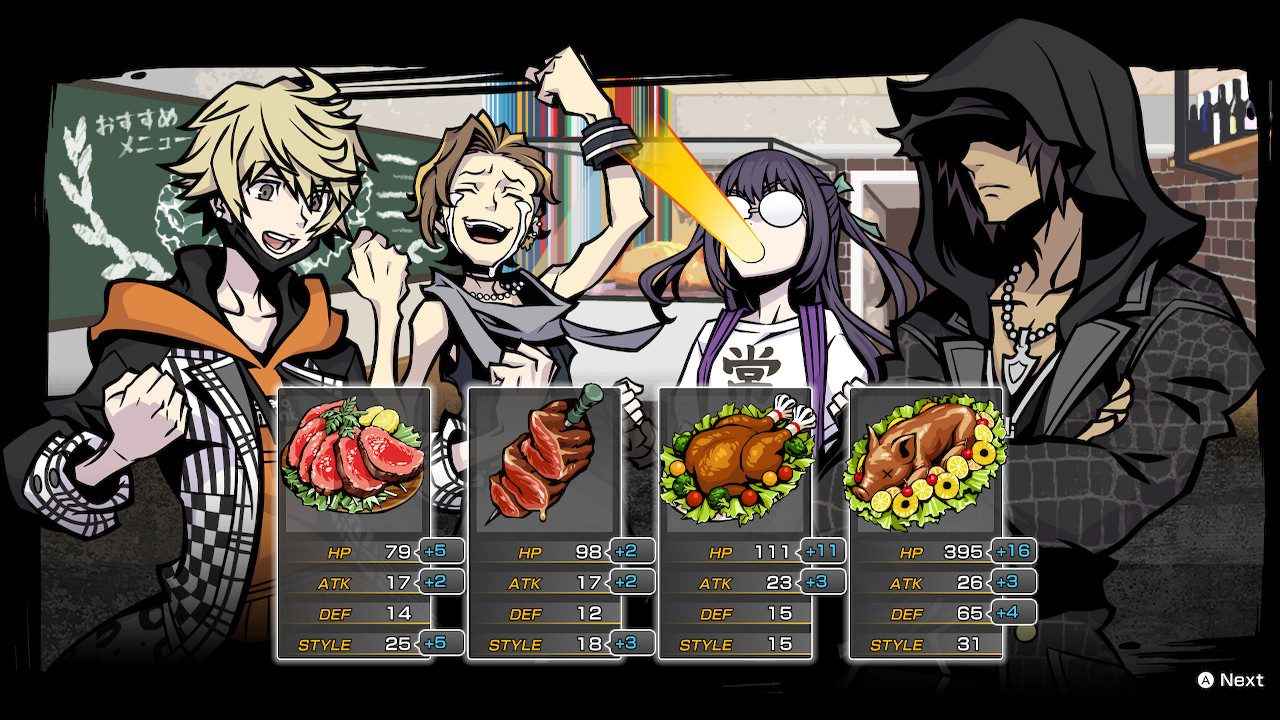 And then there is the city of Shibuya, a character in itself that is just as lively, vibrant, and crucial to the story as any of the heroes who do battle with their little pin powers. In the first game, Shibuya had a striking but flat design, with a city that felt like it was split into small, isolated locations rather than one interconnected metropolis. The addition of the third dimension in NEO’s Shibuya loses some of its more esoteric designs but creates one unified city that is far easier to navigate than before.

Even if the more avant-garde art of The World Ends with You is gone, NEO’s recreation of the city continues the original’s bold approach to interpreting and expressing Shibuya’s iconic districts. Using fixed camera angles, the developers have created a city that stretches and kneels to Rindo as he moves about the busy streets of the ‘buya. It’s a magnificent effect, forming districts that can feel open and welcoming or overbearing and oppressive. And smartly, it’s not overused, otherwise walking through Shibuya might feel like you’re in Who Framed Roger Rabbit’s Toontown.

The decision to keep camera controls away from the player is not without its drawbacks, however. In combat, your view of the action can be sometimes be obfuscated by numerous large enemies and extensive particle effects from your attacks. The camera AI does a decent-enough job for most of the game, keeping players focused on the enemy of their choice with its sometimes-reliable auto-targeting system. But in later chapters, I often struggled to see what was going on because of its positioning and the sheer mass of the creatures I was battling. At its worst, the camera in combat reminds me of my struggles to see the action in the original Kingdom Hearts. 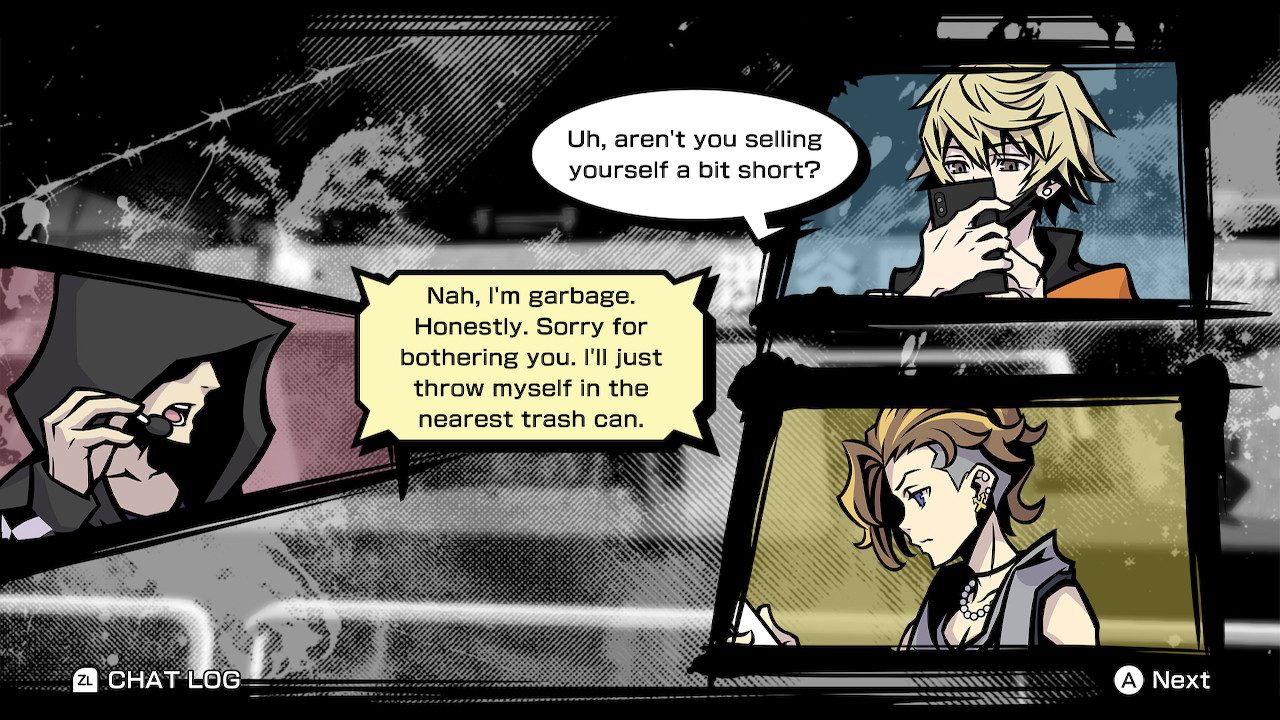 Later chapters also see an increase in the number of frame rate drops during combat. On the Switch, these drops were only for a moment no matter if I was playing in docked or handheld mode. However, depending on their timing, the drops did sometimes work against me in my efforts to dodge enemy attacks. A brief drop in the frame rate could completely throw off my timing, and dodging attacks is crucial in late-game encounters where enemies dole out massive amounts of damage in a single blow.

Thankfully, I was able to work my way through these troubles with smart gameplay and a clever combination of the pins you unlock during your adventure. Pins dictate which type of attack each member of your team can perform. You can assign a single pin to each character, and each pin carries with it a designated button input. Button-mashing melee attacks will use either the X or Y buttons while charging attacks and sustained attacks will be assigned to one of the four shoulder buttons. Experimenting with these pins, leveling them up, and evolving them into new, more powerful attacks is a real blast. The action RPG gameplay in NEO is electric and some of the best I’ve experienced in years, but it can also be downright frustrating if you go into battle with a bad combination of pins. Each pin has a short reboot period after its power has been exhausted in battle, so the idea is to create a combination of pins that can always have you attacking.

Doing that gets a bit more complicated the further you get into the game. Your team will grow, and with it, you may find yourself having to hold your controller differently than you’re used to. Having attacks assigned to all four shoulder buttons forced me to bring both my middle fingers into the action where they usually rest on the back of my controller. Holding the controller like this reminded me of a day years ago when my brother was driving me in his car and I looked down in horror to see him using both feet to drive rather than just one. Sure, it gets the job done, but it just looks and feels unnatural.

Unfortunately, that unnatural feeling makes NEO almost unplayable for me in handheld mode. Don’t get me wrong, the game looks outstanding on the small Switch screen. The colors and art direction absolutely pop on it, and I can just imagine how sleek it’ll look on the OLED model. It’s the Joy-Con that are the problem here, as the controllers are too slim for me to comfortably hold in a manner where I can tactfully use all four shoulder buttons at once. 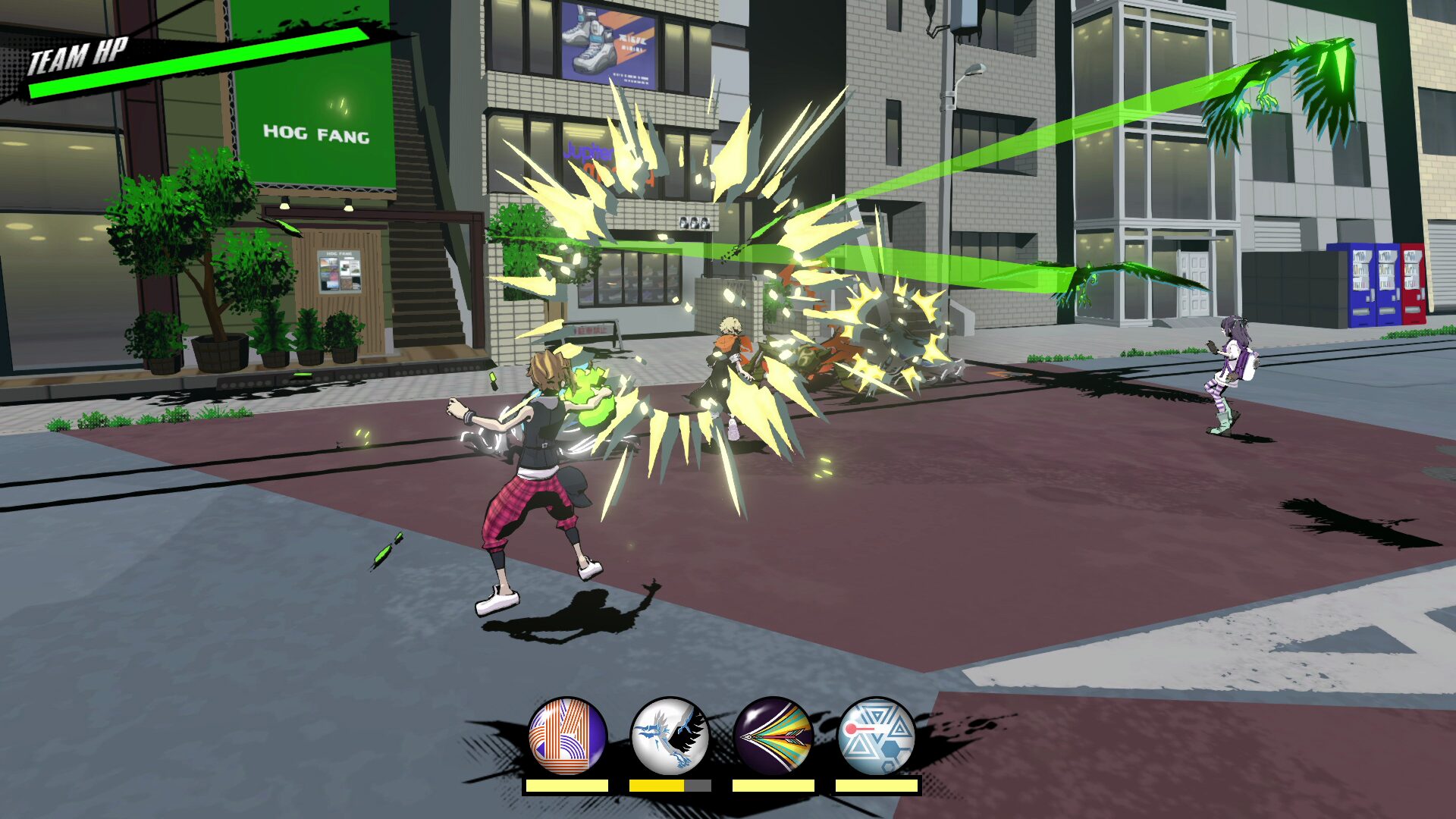 You can avoid this, of course, by choosing your pins carefully and developing attack strategies that don’t rely on more than two shoulder buttons at the same time. You can also make sure you’re doing as many side quests as you can during your adventure to expand your social network. As you help people throughout the game, you’ll unlock new skills and abilities, including one that lets you equip two pins with the same input. You’ll also unlock combo boosts that help you quickly increase your Groove Meter. Building up your Groove Meter through coordinated hits gives you access to Mashups and Killer Remix attacks. The game builds these up as some sort of devastating strike against your opponent, but in practice, they can feel kind of wimpy and are undoubtedly the least visually stimulating aspect of the game.

Disappointing as those attacks may be to look at, everything else in NEO is a visual treat. The food art is on point, character fashion is ultra-trendy, Noise design–both new and old–shows a lot of imagination, and the few animated cutscenes are plenty sleek. This lavish style extends to the soundtrack, which features new tracks and remixes from the first game. The music in NEO is pure audial delight, though it can sometimes clash with the more heavily dramatic story scenes. Sick beats just sound out of place when somebody is mourning the death of a friend.

NEO: The World Ends with You is a sequel worth waiting for. It brings together many of the best concepts from the DS original but in a more approachable and accessible experience. It may lack the lightning-in-a-bottle genius of its predecessor, but the 40+ hours I spent exploring Shibuya showed me this world doesn’t have to be complicated to be worthwhile.

Filed under... #NEO: The World Ends with You#Nintendo Switch#PC#PS4#review#Square Enix