The Sound of the Underground

If I could do it all over again, I wouldn’t get out of shape, I would’ve gotten into this gig at a younger age, and, above all, I would’ve learned to drive as soon as I was out of school. And this holiday — as the frosted winter air and expensive hotel prices keep me from a fun party — I’m reminded of how much freedom the open road allows those with four wheels and a tank of gas. No clock checking, no canceled buses, and no overnight stay necessary. Just you and the road…

In addition to freedom, having your own vehicle provides some with a sense of identity, even purpose. These are the people for whom the car is like a trophy lover, to be gifted with expensive presents, treated with love and affection, and paraded about as a symbol of status, pride, wealth, or style. And there are those who then take this six-figure token and utilize it for terrifying, death-defying races, willing to risk it all — body and wallet — for the cred of the crew and the heat of the fuzz. Couldn’t be me… I grew up on Public Information Films.

Need for Speed Unbound understands this mentality and appreciates how, for some gearheads, the vehicle and its driver are one, with equal pride shared in looks, moves, vibe, and reputation. In the world of NFSU, Car and Driver are presented as a tag team, gunning for gold against the backdrop of the flamboyant and lucrative world of upmarket street racing.

And while the irresponsible, life-threatening nature of the “real life” scenario is undeniable, the stylized world of NFS offers pure escapism, where everyone is beautiful, your wallet is bottomless, your garage overstocked, and crashing your car into a bollard at 173 mph is merely a harmless, threat-free byproduct of that golden chase for The Red Line. Buckle up. 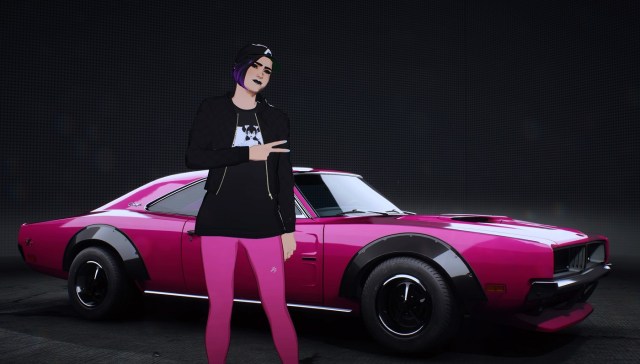 Need for Speed Unbound, as its name would suggest, represents an amalgamation of the many sub-series within the Need for Speed franchise. Whereas the past three decades have seen the racing franchise focus on a certain aspect of rubber-burnin’ — from the mission-based story of Undercover to the five-oh bothering cinematic style of Hot Pursuit — NFSU presents something of a “Best of” for the decades-long franchise; a compendium of all of the modes, ideas, and aspirations of the series’ legacy, combined into one red-hot title.

That said, there’s no denying that the overall vibe of NFSU is most certainly the Need for Speed Underground series — bedecked in outlaw culture, dangerous street dueling, flashy wheels, and pop-off drivers declaring war like it’s WrestleMania. Of all of the titles to propel the NFS brand into the ninth generation, EA has deftly chosen to go for the one sub-series that not only holds perhaps the most nostalgic memories for the NFS community at large, but also seems the most culturally contemporary for today’s flash, cash, and gas world.

Take me back to the Paradise City

Need for Speed Unbound offers a full palette of colors from the NFS paintbox. Racers can enjoy the highway/mountain burns of NFS proper, or the wheel-squealing runs through the dangerous nightlife of Underground, or indulge in a spot of police bothering chaos, as featured in Hot Pursuit (complete with NFS HEAT‘s star system). In addition to these activities, all cleanly imbued into the game world, players can also simply let rip throughout Lakeshore itself — ripping through time trials, pulling off record drifts, smashing billboards, or racking up a sightseeing tour of every gas station in the ‘berg.

Lakeshore is packed with diversions for anyone living life one mile at a time.

If this all sounds a little familiar, then that’s probably by design, as NFSU has more than a hint of Burnout: Paradise about it. Criterion’s own genre-defining open-world racer was clearly at the forefront of the developer’s mind when it came to the design and execution of Lakeshore City, and the experience in creating the rival series offers a boon in Unbound‘s favor. Between story chapters, cop chases, and 007-esque stuntwork, it is surprisingly easy to lose hours of playtime simply ripping up the city, smashing speed limit records, or entering impromptu races, time trials, and the dangerous off-road obstacle course known as “The Takeover”.

Lakeshore City is your oyster, so to speak, and you decide how to spend your time in it. 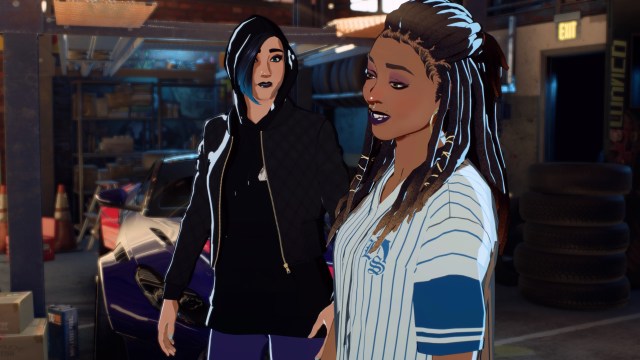 The spine of NFS Unbound is its story mode — an almost impressively rote and blah tale of betrayal, revenge, and retribution, set within the city’s highly lucrative, ego-driven world of midnight clubs and pseudo-homicidal drivers. The player’s custom protagonist embarks on a hilariously predictable and shockingly cliche narrative — one which offers little in the way of surprises to anyone versed in the cinematic oeuvre of celebrated thespian Vin Diesel.

While progressing through the story, all in-game earnings, (whether bagged on the streets or at the bookies), can be blown on a huge gallery of vehicles and upgrades, with the player gunning their way through a tiered licensing system and obtaining the machinery necessary to qualify for the city’s more elite street circuits. As Lakeshore opens up, a selection of side objectives and jobs-for-hire become available, from getting hot wheels (not the toys) out of the city under the watchful eyes of the feds, to becoming the most One-Star-Rated Uber driver in history. These missions all offer their own rewards, unlocking new safehouses as well as access to more vehicles and upgrades.

While all of this activity is fun and enjoyable, it has to be noted that NFSU‘s narrative and script absolutely do not make the grade. The soundtrack is perfectly suited for folk far younger and cooler than I, and the voice acting is perfectly fine, but the dialogue is atrocious, wall-to-wall with insufferable, cookie-cutter “bants”. Once a character ended a call with “gotta bounce, yo, craving boba”, I knew that we’d gone beyond “I’m  just too old” and into the realm of focus-group-approved dialogue.

It is, as the kids would say, Cringe AF. 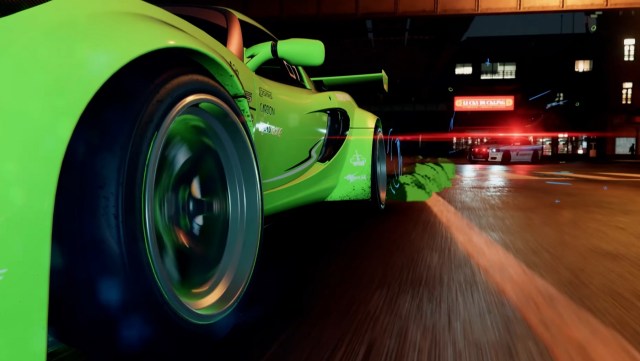 What’s going on under the hood?

Developed by the masterful Criterion Games, Need for Speed Unbound is a spectacularly polished title, which goes to great lengths to utilize the power of the ninth-gen platform. Even when run in Performance Mode, (and why not?), NFSU is a visual marvel, with atmospheric use of light, shadow, reflections, weather effects, and other visual trickery to dazzle the eyes. And when the lights go down and the roughest of riders come out to play, then the atmosphere truly comes into its own, as the neon blur of the city, the flare of the headlights, and that threatening flash of red and blue in the rearview bring the world of NFSU to life.

The key to any racer lies in its handling, and Unbound is pretty darn slick. Each and every vehicle feels accurately tuned to its bespoke ability, while ensuring that the whole game never feels too “simulation”. While perhaps the most technically proficient NFS title in years, engagement remains a top priority. Criterion has ensured that the newly overhauled mechanics never get in the way of simply having a rip-roaring time. NFSU remains a fully accessible “arcade” title — to be enjoyed by fans of Gran Turismo or Crash Team Racing. NFS Unbound has flash and flare in spades. The blend of “real-life” visuals with cel-shaded graffiti animation is one of the legitimately coolest mechanics added to a racer in years, and the juxtaposition of the two visual elements works because of, not in spite of, the tonal clash. This whole vibe — Grit meets Party — is NFSU‘s personality, and I would hope that a potential sequel would see Criterion dare to go even further with this style, presenting a racer that feels truly ripped from the walls of the inner city.

NFSU is kitted out with an incredibly deep customization system, featuring bespoke livery designs, a vast palette of colors, multiple metal types, and hundreds of accessories, underglows, rims, exhausts, bumpers, spoilers, and even horns. NFSU allows those with the time and prerogative the opportunity to build a custom garage full of beautiful, bespoke vehicles. And whether your dream car is the latest Lambo or The Homer, you’ll likely find that you’re able to capture your perfect aesthetic for your four-wheel babies.

Oh, and yes, the player avatar is basically as customizable as the cars themselves — with an ever-growing catalog of real-name brand clothing, as well as myriad options for skin tone, hair, build, makeup, and taunts. You gotta love how developers have basically found a way to crowbar WWE SmackDown‘s Create-a-Wrestler mode into every gaming franchise. Sadly, despite an intense search, I’m yet to find Michelle Rodriguez’s pleather flame plants from the first Fast & Furious movie… Ever since its heady, 3DO-based inception back in 1994, The Need for Speed has struggled to maintain its grip as the King of the Arcade Racer. The ensuing decades have seen the series hit its highest highs and lowest lows as it attempts to find its sweet spot in a pretty fierce, hardware-driven marketplace.

With Need for Speed Unbound, however, Criterion and EA have successfully married the finer points of the series’ past to Criterion’s own excellence in delivering taut and exciting racing action. And, further bolstered by the power of the ninth generation, new technologies afford NFSU the burst of nitrous that the series has chased for some time, revitalizing a brand that many had thought was ready for the scrapper’s yard.

Need for Speed Unbound is a highly enjoyable and splendidly polished arcade racer. Criterion has picked meticulously through almost 30 years of NFS legacy, stitching together its finest elements to create a brilliant, feature-packed amalgamation that offers compelling gameplay, deep design, and dazzling aesthetics. Simply put, Need for Speed Unbound is one of the best entries in the history of the franchise.