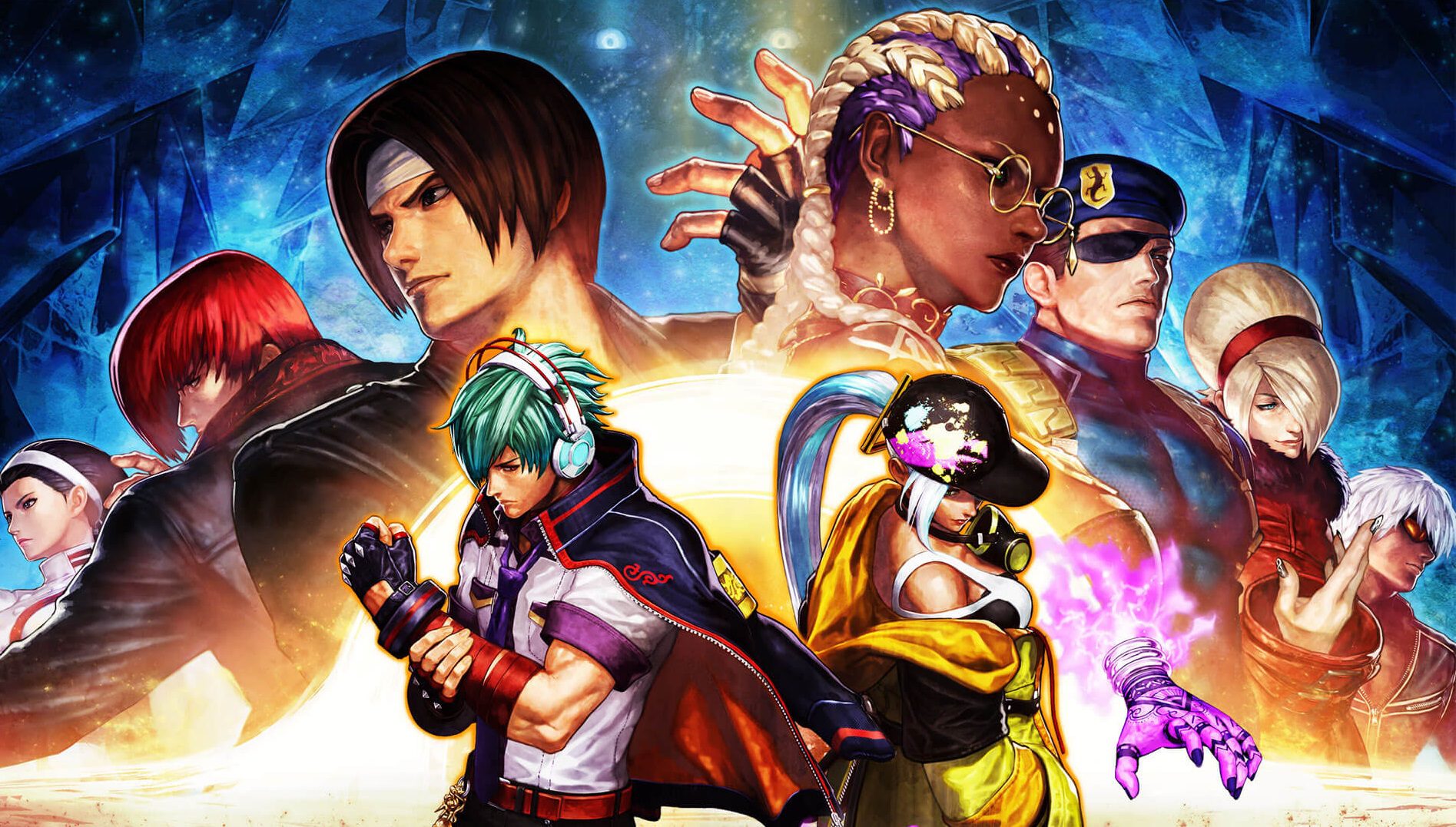 There is no fighting game franchise I’ve spent more time playing than The King of Fighters.

If you tally up the hours, the purchases, the import miles, and the sackfuls of 20p pieces, SNK’s team-based slugfest has swallowed up more days, weeks, months, and years of my life than any other fighter… Any other game? Quite possibly.

I became enamored with the legendary fight franchise back in 1994. Its crossover concept, when Super Smash Bros. was but a twinkle in Nintendo’s eye, was so damn exciting. By the time the series had introduced annual updates, custom team builds, and awesome original characters, (including my long-time muse, Leona Heidern), I was already hooked, whether battling on an imported Sega Saturn, a hazardously cobbled-together Supergun, or the roughshod MVS cabinet nestled snugly in my college’s cafeteria. Hell, I’ve even played KoF on three separate continents. Good. Fucking. Times.

KoF sure doesn’t look like it used to. We don’t open with the “100 Meg Shock!” jingle anymore, and the market it finds itself in is as competitive today as it has been in 20 years. But, with The King of Fighters XV, SNK is putting all of its chips on the table in an all-out effort to please the veteran KoF community, build a fresh competitive scene, and attract a plethora of new players to its star-studded battle royale.

So, ain’t nothing to it but to do it… Select The Order.

The King of Fighters XV is the catalyst for decades of SNK fighting titles, an attempt to bring together the entire heritage of the KoF series for one almighty release. While not a “Dream Match” title, (such as previous releases KoF ’98 and KoF ’02), KoF XV nevertheless feels like a “Best Of” offering, sporting arguably the greatest roster ever assembled for a canon release. The new entry holds the KoF series’ legacy in great reverence, while making efforts to contemporize itself for modern fighting game players.

KoF XV does a fantastic job of retaining the speed, weight, pace, and overall “feel” classic King of Fighters, despite its different baseline engine and visual style. Veterans will be pleased to see the return of the series’ four-button control scheme, along with time-honored mechanics such as evasive roll, Blow-Back, dashing, hyper-hops, and the devastating MAX mechanic. While KoF XIV is a title I did not delve too deeply into, I found myself immediately at home with KoF XV‘s controls and dynamic. Like riding a bike that’s punching me in the face. Go with it.

New to the party is the Shatter Strike, which trades meter for a hefty single blow. I have previously likened this to Street Fighter IV‘s Focus Attack, putting its victim in a defenseless crumple state. Blow Back can still be activated from block, providing a useful combo breaker while propelling the opponent a good distance for that all-important reset. EX moves, Supers, MAX Supers, and the fantastically cinematic Climax Supers; KoF XV is packed with meter-eating mechanics. Add cancels, Super Cancels, and Climax Cancels to the mix, and you have an impressively deep combat system, requiring some of the most complex and efficient meter management in the current fighting game scene.

However, as much as this is a boon for expert KoF players, it also works somewhat against SNK’s hopes of roping in newbies. In an era when the notoriously complex Guilty Gear chose to strip back its difficulty and tight input restrictions for Guilty Gear Strive, KoF XV retains its hefty learning curve, tight input windows, and plethora of movement mechanics, potentially warding off fresh meat.

Thankfully, the “Rush” system should help starters find their footing. Rush allows players to activate simplistic auto-combos into Supers with a few simple button presses. When first starting out, Rush can help players understand the pace and flow of KoF, while also dropping endorphin-releasing strings of attacks. Elitists may scoff at the very concept of Rush, but for getting players up-and-running, it’s an important mechanic. We need to kick that front gate wide open, not deadbolt it.

As a brief summary for a complex subject: KoF XV is a solid, tight, and incredibly exciting fighting game. It sports a stacked and unique roster of characters, a litany of offensive and defensive mechanics, and is loaded with complexities and potential — but in regards to welcoming players, it’s still something of a matter of “trial by fire”, despite its best efforts to onboard newcomers.

Ever since the franchise transitioned to 2.5D, KoF’s biggest fight has been with the fans, many of whom are disappointed with SNK’s move away from pixelated visuals. One can hardly blame the naysayers, KoF XIII was, quite simply, one of the greatest looking fighting games of all time. But in an age of Street Fighter V, Mortal Kombat 11, and Tekken 7, and with the company coffers running low, SNK chose to pull the plug on its expensive legacy looks, replacing its hand-drawn sprites with more easily produced 3D models.

There’s no denying that KoF XV‘s character models have received a major polish from KoF XIV. Everybody looks sharper and better-textured. Bright colors pop and animations flow smoothly, though there’s an admitted awkwardness to certain walk cycles, which can be reminiscent of skating (and I’m not just talking about ice-loli Kula). The new character models — such as the mysterious Dolores and the returning Elizabeth Blanchtorche — are excellent, while the boss characters are among the series’ most ambitious designs in years. In general, characters created specifically for KoF XV look fantastic, while returnees from KoF XIV simply sport impressive “digital facelifts”.

One element in which The King of Fighters stands far and ahead of its contemporaries is in its gorgeous visual effects. From the luscious emerald flames of Ash Crimson, to the iridescent rainbow glow of Elizabeth’s air-slicing abilities, KoF XV has dazzling specials and characterful supers. Hardly the most important element of a fighter, but it sure helps add to the hype.

It’s unlikely that the call for KoF to return to its traditional style will ever cease. Hell, I’d love to see this here roster recreated in KoF XIII‘s beautiful hand-drawn visuals. It simply isn’t going to happen, and while that is a disappointment, it’s unfair to bitterly state that King of Fighters XV looks bad. It looks different, sure, but it looks great.

Part of the fun with KoF is checking out who fits best into your dream trio. With KoF XV‘s huge variety of strikers, zoners, grapplers, and rushdown experts — all sporting distinctive looks and personalities — there is a lot of enjoyment to be had meeting the 39-strong roster. A deep training mode offers all of the tools expected from any modern fighter, while a slim but challenging trial mode sets up a handful of technical combos for each character on the roster.

The Story Mode — quite heavily hyped by SNK marketing — is a bit of a bust, offering little more than a few CGI sequences peppered between what is, effectively, a standard Arcade Mode. Additionally, the narrative itself is blah, essentially a retread of the Orochi Saga with Shun’ei, Isla, and Dolores playing Kyo, Iori, and Chizuru respectively. On the brighter side, each team has its own custom end sequence, while special custom teams unlock artworks and other fun extras. But, for the most part, KoF XV is relatively thin on single-player content.

One of KoF XV‘s raddest features is the DJ Station, which I’m now demanding for all fighting games. This mode allows the player to customize the entire soundtrack of KoF XV, picking from hundreds of tracks from the entire franchise and other SNK releases such as Metal Slug and Samurai Shodown. Want the KoF XV Pao Pao Cafe to have the Pao Pao theme from KoF ’94? You can. Want the character select screen to have the awesome character select theme from KoF XIII? You got it. Once the alternative OSTs scores are unlocked (via story mode wins) you can customize the entire soundtrack to your liking.

Competitive players will be pleased to hear that KoF XV has a range of tools to make for easy setup of tournaments. Players can auto-save up to 15 custom teams, along with setting up brackets and rulesets, registering player names, and even changing in-game billboards to sport the name of your tournament or scene! Very cool. Ranked, Casual, and Lobby matches are all supported for online play, with online training and sparring also available while you wait in line to get your ass handed to you.

I was unable at press time to experience KoF XV‘s online modes, which sports the much-vaunted rollback netcode. I played the most recent KoF XV beta for an entire weekend and found that, for the most part, my online experience was slick, responsive, and lag-free. This is provided I faced opponents sporting Lvl.4-5 connections. Lvl.3 connections were a dice roll. Lower levels featured frustrating input delay, though there is an input deficit option for such encounters.

I will update this review in a week’s time with my post-launch experience of the full release.

The King of Fighters, despite its legacy in the pantheon of fighting games, has always been an underdog. It was back in 1994, and it still is in 2022. With The King of Fighters XV, SNK has taken bold strides to punch through that ceiling, with a notable effort to produce the biggest release in the franchise’s history. As to whether the new title will have what it takes to go global, pull in fresh audiences, or blow up the competitive scene… Well, that’s another matter.

If KoF XV builds a strong online presence, powered by reliable netcode, a dedicated player base, and generous support from SNK, then there’s no reason that it can’t find its niche amongst other fighters of the ninth generation. The King of Fighters is literally titled after royalty, and, some 30 years later, it’s high time that it started living up to its moniker.

The King of Fighters XV represents SNK’s strongest efforts to reignite the flames of its most prestigious franchise. With fantastic fighting action, a compelling roster, splendid visuals, and revamped online options, KoF XV is a treat for both series veterans and the fighting game community at large, though newcomers may still find themselves dizzied by its myriad mechanics and steep learning curve.