The Dark Souls of rhyt– wait, don’t leave yet!

The Taiko no Tatsujin (“Taiko Drum Master”) rhythm game series has been around for a while. Since its first entry on PS2, there have been over a dozen of these things on a variety of systems, on top of successful arcade machines. And yet, for most people, there haven’t been a lot of opportunities to play this series.

Indeed, this is the second game available in English release since the start of the series, the last one being on PS2. It’s not surprising, then, that I never got the chance to try these games before. Having to import a copy be damned, I couldn’t ignore such a historical event!

Let’s see if the latest entry in this elusive series can keep up the pace. 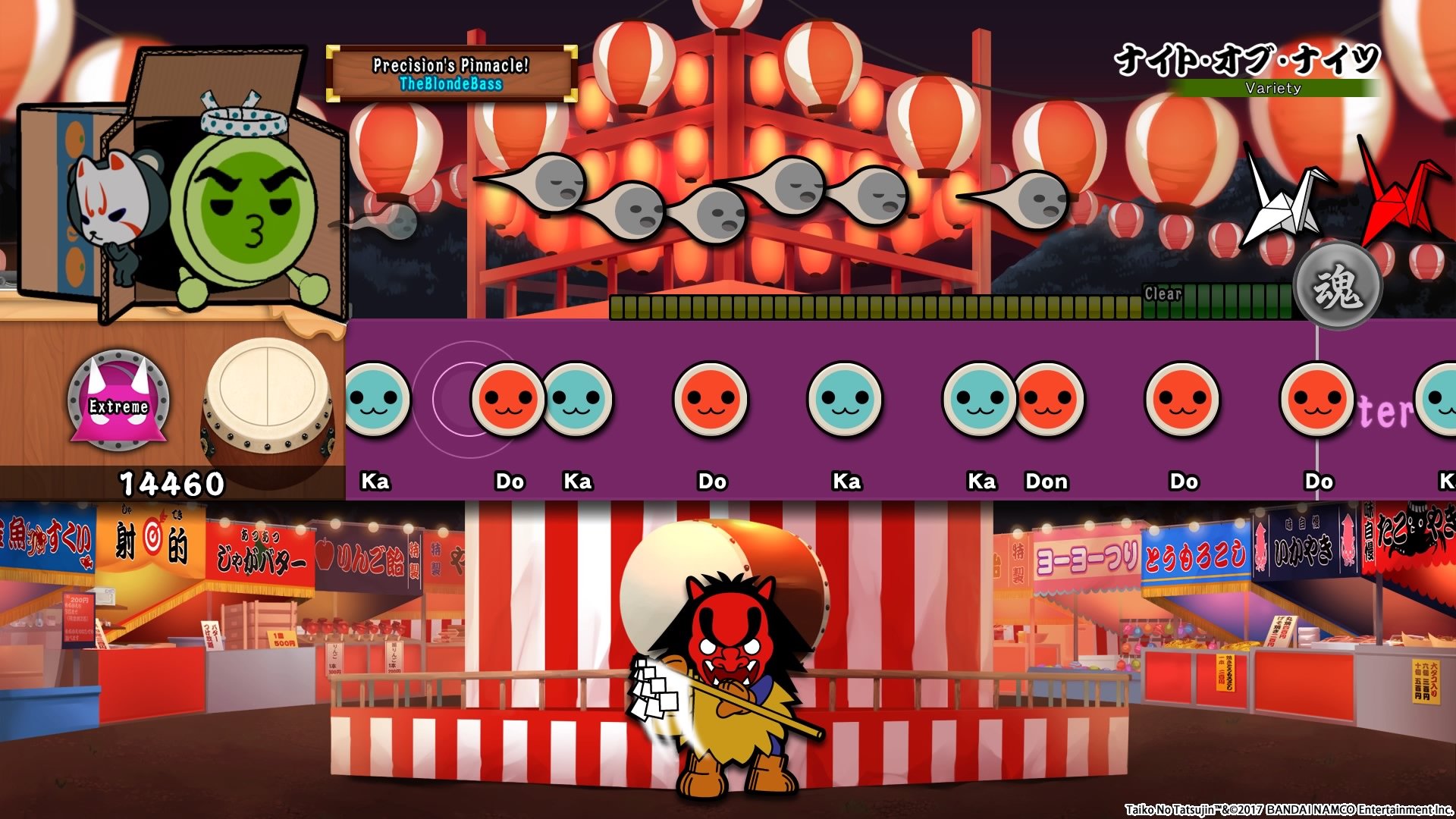 Looking at the screenshot above, keen-eyed people might go “why, this looks like Donkey Konga.” Yes, it looks like Donkey Konga, and there’s a very good reason for that! Namco made those games too back in the day. Both of them play very similarly. Notes of two different colors appear on the screen and you must hit them with the right timing. You’d think a rhythm game with only two different kinds of notes would be pretty easy, but it’s just an opportunity for the charts to go wild at higher difficulties.

On the technical side of things, there’s a lot to like here. Visuals are super crisp and the audio sounds just right. There’s an option in the settings that somehow uses a microphone plugged into a DualShock controller to automatically detect the visual delay to use. That’s super smart! One negative, however: I had to turn off the feature that automatically uploads ghost data from drum sessions. While it was on, the game soft-locked every time it tried to send said data, which isn’t exactly enjoyable. When playing in local multiplayer, you’ll have to deactivate this individually with each account.

Wait, what’s that you ask? Local multiplayer in 2017? Why yes, and it works just like an arcade game. The entire interface, save for ranked online matches, is accessible while playing with two players. Both of them can simultaneously unlock content while playing together. It’s as cool as it sounds! Though, in all likelihood, you won’t have two drums so one person will have to be the lame person stuck with a regular controller. 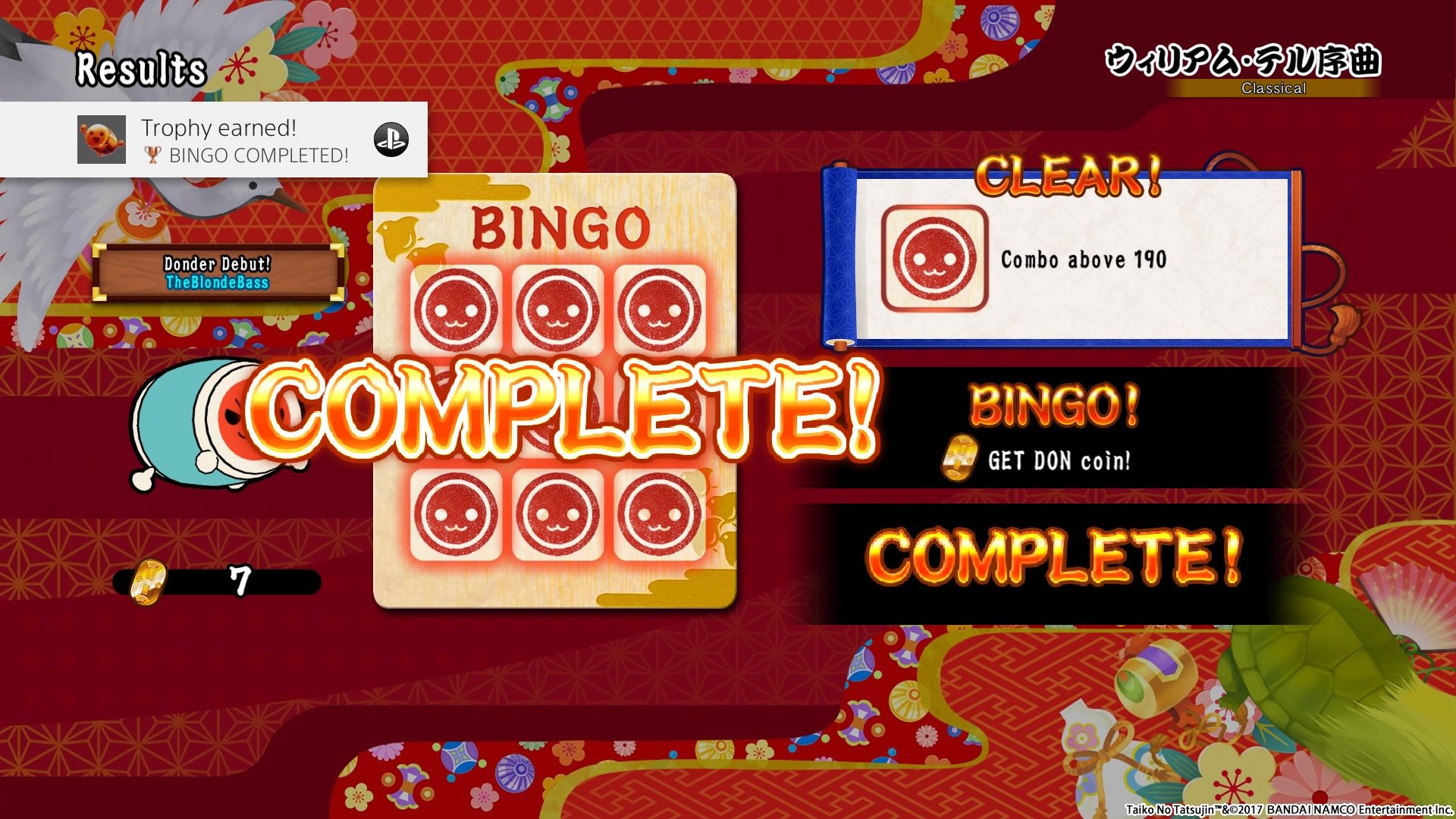 This arcade philosophy is not without its faults, however. There’s not a huge amount of content, with no single-player story to speak of. Each song has multiple bingo cards filled with various objectives, and each line you complete gives you a coin. When you have at least two coins, you can unlock new customization options. Those can be new costumes for Don Wada, the series’ mascot, or little things like new sound effects and greeting messages. While unlocking new costumes is fun, you need to have a drive for self-improvement because the game won’t offer much in terms of long-term objectives. Well, you can also look at it like a game you can bust out in front of friends for a laugh or two. That also works.

Speaking of Don Wada, that little guy’s voice is possibly the most grating thing ever conceived by mankind. I’m not sure why someone would attempt to create such concentrated evil, but I sure know they succeeded. Every excruciating second I’ve had to suffer this voice acting was masochistic bliss beyond compare.

The propriety drum controller by HORI is, as far as I’m concerned, a must-have. It’s possible to play the game with a DualShock, and it’s actually easier to hit notes quickly using one, but the experience isn’t the same. You need to slam down on the drums surprisingly hard for the notes to register, but the build quality is quite solid so I never felt like it was going to break under my continued assault. It’s a bit challenging at first to get used to the blue notes, which require you to hit the outer rim of the drum, but once you do it’s smooth sailing all the way. It plugs into the PS4 via USB, which is perfect because you’ll probably want a cable extension depending on your setup. There’s another advantage to the standard USB connection: It also works on PC! 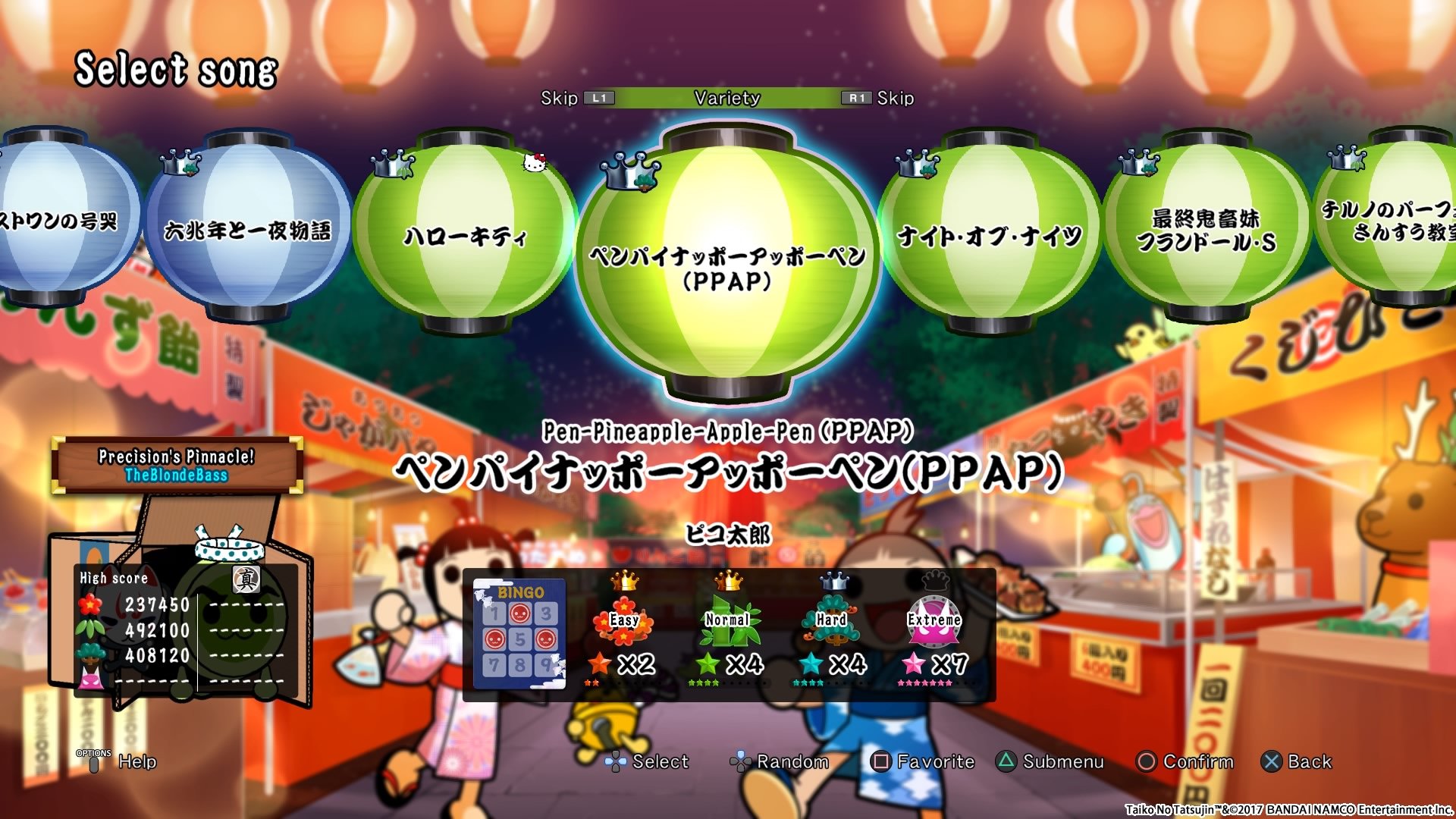 How much you’ll enjoy Drum Session’s tracklist depends entirely on how much you’re willing to lower your standards. It’s almost entirely made out of J-Pop tracks. As far as I’m concerned, drumming to these high-speed songs was incredibly thrilling despite not understanding a word of the lyrics, but I can see the mix not being to everyone’s taste. If you follow anime a little, odds are good you’ll find songs you recognize… if you can notice them through the untranslated song selection screen. Here are a couple of examples:

Pro-tip: Still living with your parents, yet you find the classical music included boring? Aim for the Touhou Project tracks; two of them are lyrics-free and get your blood pumping with their quick tempo.

The most amazing thing about Taiko Master: Drum Session is its natural progression of difficulty. There are four different difficulties for each song. Easy is super easy, and better suited for younger players or people who have never touched a rhythm game. Normal has a wide gamut of difficulty depending on the song, ranging from barely harder than Easy to a decent challenge. That’s, in my opinion, the best way to get used to a song’s rhythm and basic structure the first few times around. Hard is a real challenge on most songs, and where I usually settled for regular play at my skill level. Extreme is… pretty insane. No matter how much you play, there’s a difficulty that’s satisfying at your skill level. 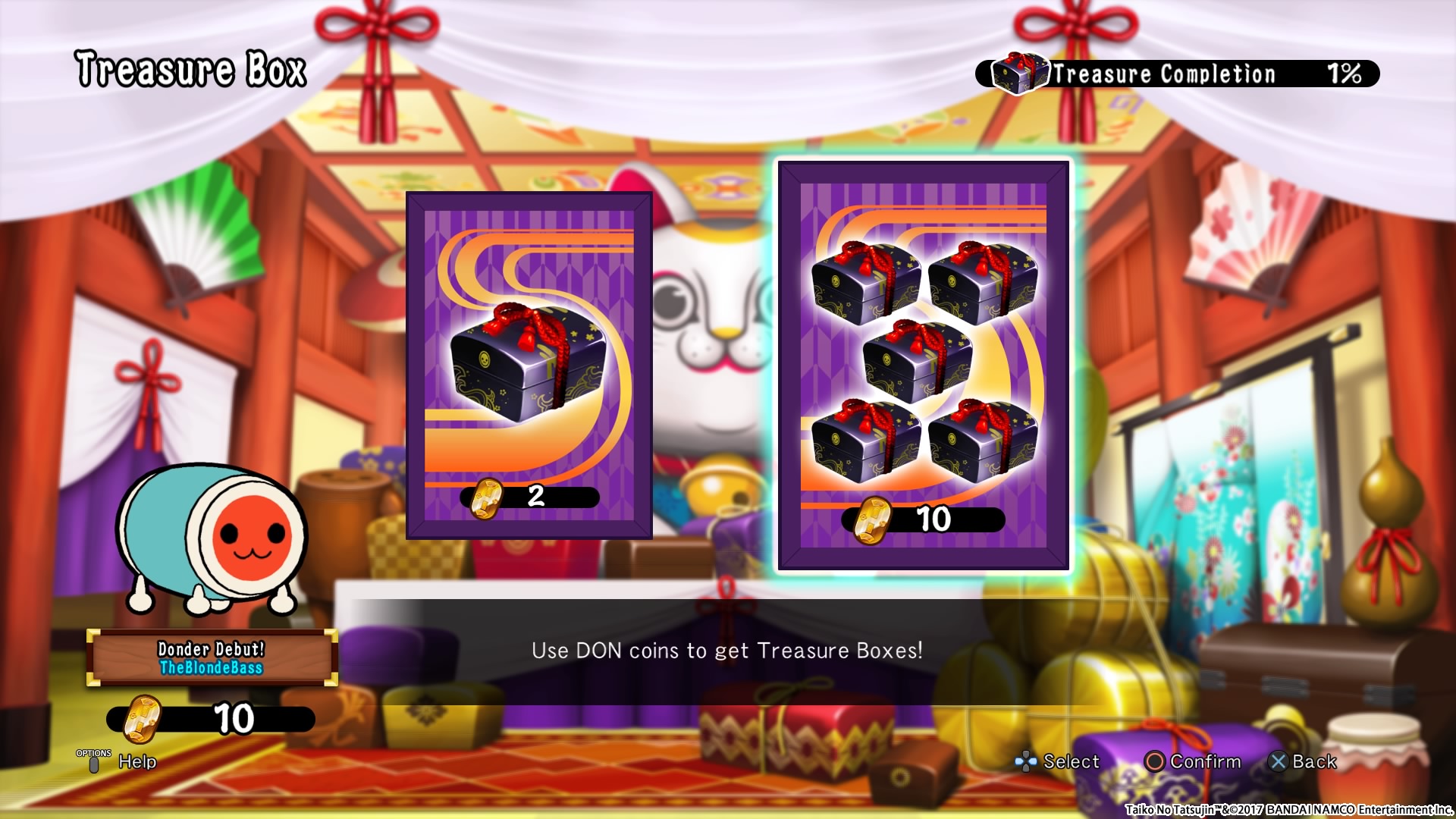 Simply put, we don’t have any game like Taiko no Tatsujin: Drum Session! in the west, and that’s a real shame. Because no other game would make me unironically look forward to hearing PPAP.

No other game could have me smile from ear to ear while said ears are bleeding from a character’s high-pitch screeches.

No other game would keep me playing while my back is begging me to stop.

No other game would make me turn up the volume while playing highly embarrassing Vocaloid songs in front of family and friends.

[This review is based on a retail build of the game purchased and imported by the reviewer.]