Sally sells Seaslights by the seashore

Harvestella takes place in a land where four massive crystals known as Seaslights that keep the world in balance and bless the people who call this place home. At beginning of this tale, your character awakens with a customary case of amnesia. After a quick once over by the town doctor, they bear witness to a meteor striking just outside the town of Lethe Village. Inside is a mysterious girl known as Aria. A traveler from the future? Perhaps, but her arrival marks the beginning of a journey that’ll see your hero fighting their way through dungeons in a quest to save the world.

In other words, your typical JPRG storyline, but with some farming thrown in for good measure. 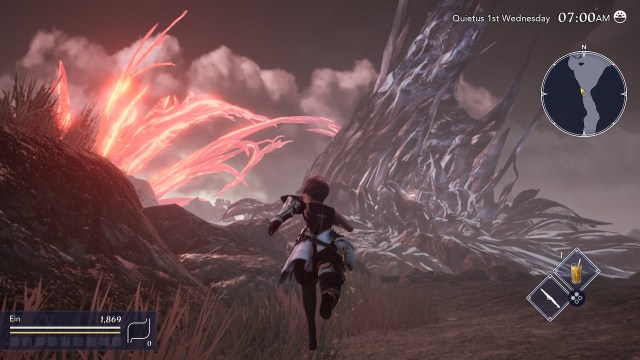 If you have played Rune Factory 5, a game I’m only going to mention once in this review, you’ll have a good idea of how things go here. Players will split their time between tending to their farm, fighting through dungeons to move the story forward, and completing the many side quests that cross their path. On paper, it sounds pretty standard for the genre. But in play, Live Wire has managed to introduce just enough of its own ideas to make this more than your average farm sim/RPG.

In terms of farming, it’s all par for the course. You have different crops that grow in different seasons, you’ll unlock new seeds as you explore more of the world, and the more time and money you invest into your farm, the better your output will be. There are machines you can craft to make cheese, flour, or smoked meat, and certain crops can’t be planted until you’ve unlocked enough of your farmland to access their preferred soil. Some crops, like carrots and lettuce, grow comically fast, while others can take far too long to be worth it. I’m looking at you, Harvestella‘s version of corn.

Thankfully, the game avoids some issues that could have otherwise made for a cumbersome experience. While your on-person storage capacity is limited, the storage box you’ll find all around your farm can hold an incredible amount of stuff. And you can cook and craft using ingredients in your storage rather than having to carry them. Finally, if your on-person storage is full, items you get from completing quests will be sent directly to your storage. Did I just dedicate an entire paragraph to storage in Harvestella? Yes, I did. Because it’s a vital element that could have gone wrong in any number of ways.

Unlike that other game I promised to only mention once in this review, tending to your farm is pretty much a necessity if you want to see Harvestella through to the end. Your character will take a lot of damage in battle, and their energy can fade pretty quickly if you keep fighting wave after wave of monsters. Growing crops and turning them into food and drink will help you last longer in the dungeons you explore. And given how quickly time moves in this game, you’ll need every second you can get.

One of the big criticisms of the demo was that time moved too fast. While it’s arguably a bit slower in the final build, the clock still moves at a hasty pace. It can take a little getting used to, and I can imagine some people will be frustrated when they see a dungeon checkpoint (i.e. warp point) on the horizon that they’ll have to wait until the next day to reach because it’s almost midnight. I would probably feel the same way if I didn’t enjoy diving into these dungeons as much as I do.

There is an old-school design at play for the dungeons of Harvestella. Their layouts feel very pen and paper; like they were all initially drafted on graphing paper. There are shortcuts you can access if you have enough time or supplies, and everyone once in a while, you’ll come across little sparkling lights that trigger text-based events that can help or hinder your party. It reminds me a lot of the dungeons of Etrian Odyssey, particularly when you consider the FEAR enemies you’ll encounter. Like Etrian’s FOEs, these are massive monsters with high levels that you’re conditioned to run from until your party is strong enough to take them on. Some FEAR are there to block your path, others hide treasure chests you’ll want to plunder. Sometimes you can get lucky and sneak past a sleeping FEAR to take the treasure they protect. If they do wake up, just make sure you get your main character out of their path. You can take up to two party members with you into a dungeon. The number of available party members will naturally grow as you progress through the game. As they’re added to your team, you’ll unlock new jobs you can equip the main character with. Each job carries its own unique weapon and special attacks, but the standard attack across the board is just to mash a single button. If there is one thing that greatly disappointed me about Harvestella, it’s the simplicity and lack of imagination in its combat system. I imagine the idea was to have players frequently swap between jobs in battle to maximize their potential for using special attacks, but switching in and out of jobs isn’t as fluid as it should be. I mean, there’s a cooldown for starters, and while you can upgrade the job to reduce that timer, it’s still not as brief as it should be. And even if you could switch jobs on the fly, some of them, like the Mage, just aren’t fun to play.

I think a two-button combat system would have done a world of good in improving the feel of fighting in Harvestella. A little more personality in its world and inhabitants would have gone a long way as well. Lethe Village, the town you’ll spend most of your time in, looks like one of those small towns from Final Fantasy that you’d rush right through to get to the next part of the game. It’s far too featureless for what is the primary location outside of your farm. Other towns feature interesting design concepts that are hindered by the visuals. Nemea Town is famous for its year-round cherry blossoms, but they don’t look all that impressive when their pink hue is washed out by the bright gray and marble coloring of the village. The seaside town of Shatolla should be a harmony of gorgeous Mediterranean colors, but most of its beauty is washed out and faded. But even if they’re not all they could be, I did enjoy revisiting each and every one of these towns if it meant unlocking more of the story and side quests. The writing here is stellar, both in terms of character dialogue and the stories they tell. A lot of the people of the world have some sad, melodramatic histories that trigger the same, repetitive sorrowful song when they start dropping that exposition, but there are plenty of uplifting and delightful stories to unlock as well. As for the overall narrative, it’s engaging enough to carry the game for the 60ish hours required to reach the end credits, even if it doesn’t quite grip me as some of the best JRPG stories of the past have.

If Harvestella is to be the first of a new franchise for Square Enix, I think this game gets it off on the right foot. Outside of combat and the disappointment of the much-hullabalooed Quietus season, this is a pretty good take on the farm sim/RPG genre with some excellently designed dungeons and characters worth caring about. It may be a bit too simple for some, but I will gladly accept simplicity if it’s wrapped around something as delightful as Harvestella.