The Fast & The Furriest

Can they still call you a war hero, even when you lost? Who knows whether such thoughts bother the mind of Rayton Rabbit, sitting in silent seclusion, just another moving dot within the rusted nightmare of Torch City. It wasn’t always like this for the furtizens, mind. The city was once bustled with activity and commerce, awash with plant life and clean skies. Then the machines came… “progress” came. Ray and his fellow resistance members fought, and fought hard. They gave it their all. Lives spent, battles won and lost, but eventually, inevitably, defeat. Six endless years of battling Legion and its battalion of mechanical marvels, and it was over. The machines had won.

And what’s Torch City today? Industry. A robotic police state in which to exist, but not live. The crystal-clean skies now just a fable told to the young. And while Ray has long resigned himself to live out his advancing age in the shadows of local dives, fate has more conflict in store. His friend and comrade, Urso, is now a prisoner of Legion, held somewhere deep within the impregnable Forge Tower. Ray’s tour of duty is over — long over — but as any good soldier knows… You don’t leave a man behind.

After all, isn’t that what war heroes are made of? 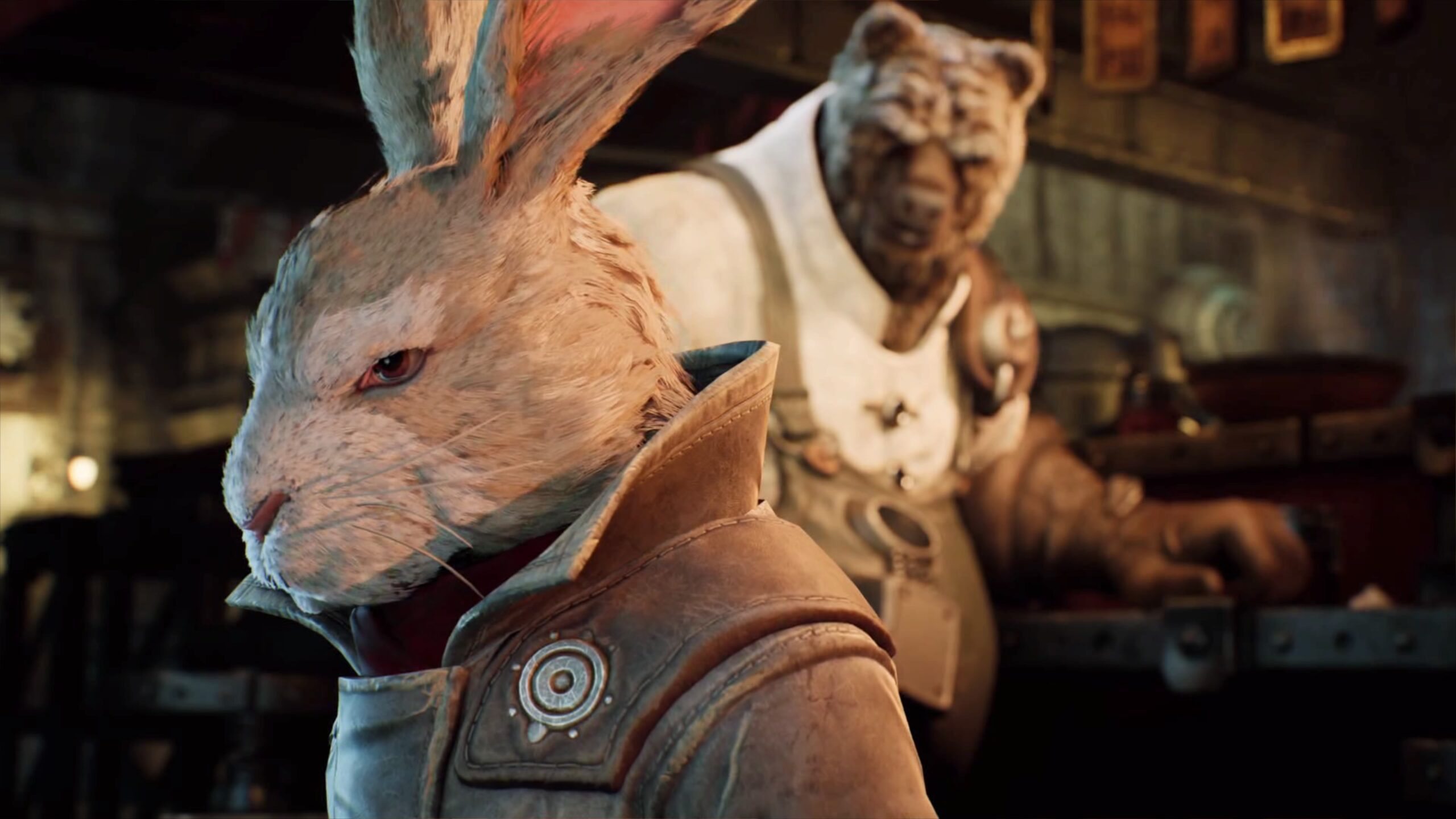 F.I.S.T.: Forged in Shadow Torch is a new action-adventure developed by TiGames and published by Chinese video-sharing giant BiliBili. This brand new IP is set within the miserable, grimy, Dieselpunk universe of Torch City, a run-down but functioning society wherein the anthropomorphic residents — or “Furtizens” — eke out what little lives they can under the shadow of their fascistic overlords, Legion. Players step into the worn jumpsuit of Rayton Rabbit, called back into action following the sudden arrest of his best friend. Summoning the last of his guile, Ray dons what little of his former battle armor remains and sets out for Forge Tower on a rescue mission, unaware that this already impossible task is only the beginning…

It seems almost redundant to describe F.I.S.T.‘s gameplay, given its tried-and-tested metroidvania nature. As is to be expected, Ray explores a vast 2.5D map — stretching from Torch City’s dizzying heights to its seedy underbelly — unlocking abilities and skills, gaining access to a furry flurry of cool abilities. But as Ray’s mission takes him deeper and deeper into the city, our hero will acquire destructive new weaponry, athletic new skills, and uncover a twisted tale of redemption, betrayal, friendship, class war, and that all-important ingredient: Hope. While all of the above might seem trivial, unoriginal, or even rote to some readers, F.I.S.T has a selection of aces up its sleeve… Perhaps the most important of which being “Holy shit, it’s great.”

While F.I.S.T. hardly scores in the originality stakes, (at least where method is concerned), the ambitious title knocks it out of the park with almost everything that it brings to its grim party. First and foremost is TiGames’ eye for detail and its fascination with design. Torch City, for all of its grunge and misery, is a stunning game environment, with scalpel-precise intricacy oozing out of each of its alleyways, sewers, prison blocks, and industrial furnaces. Every new location is an immersive wonder, given atmosphere through amazing light and shadow effects and backed with a weighty, suitably industrial score. Torch City, for all its heavy stylization, feels alive. And despite the overall dismal tone of this particular zootopia, The oppressed ‘berg is packed full of surprises — such as the delectable hub world of “Jofree Avenue”: a haven of ’40s noir hidden between the pumping pistons and hydraulic presses of Forge Tower. Play it again, Ray.

A similar focus toward design powers F.I.S.T.: Forged in Shadow Torch at every available opportunity. From Ray’s own dieselpunk weaponry, gleefully inventive quick-travel posts, suit-washing save points, item shops, and unlockable paint jobs for Ray’s arsenal. Every facet of F.I.S.T. has soul put into its creation and animation: A store vendor with an expandable shop; Rube Goldberg doorway designs; a metamorphosing giant drill. Torch City, from its open vistas to its smallest of hovels, is quirky, surprising, and fascinating — a testament to the lengths gone to make the smallest details of its cog-wheeled world count. 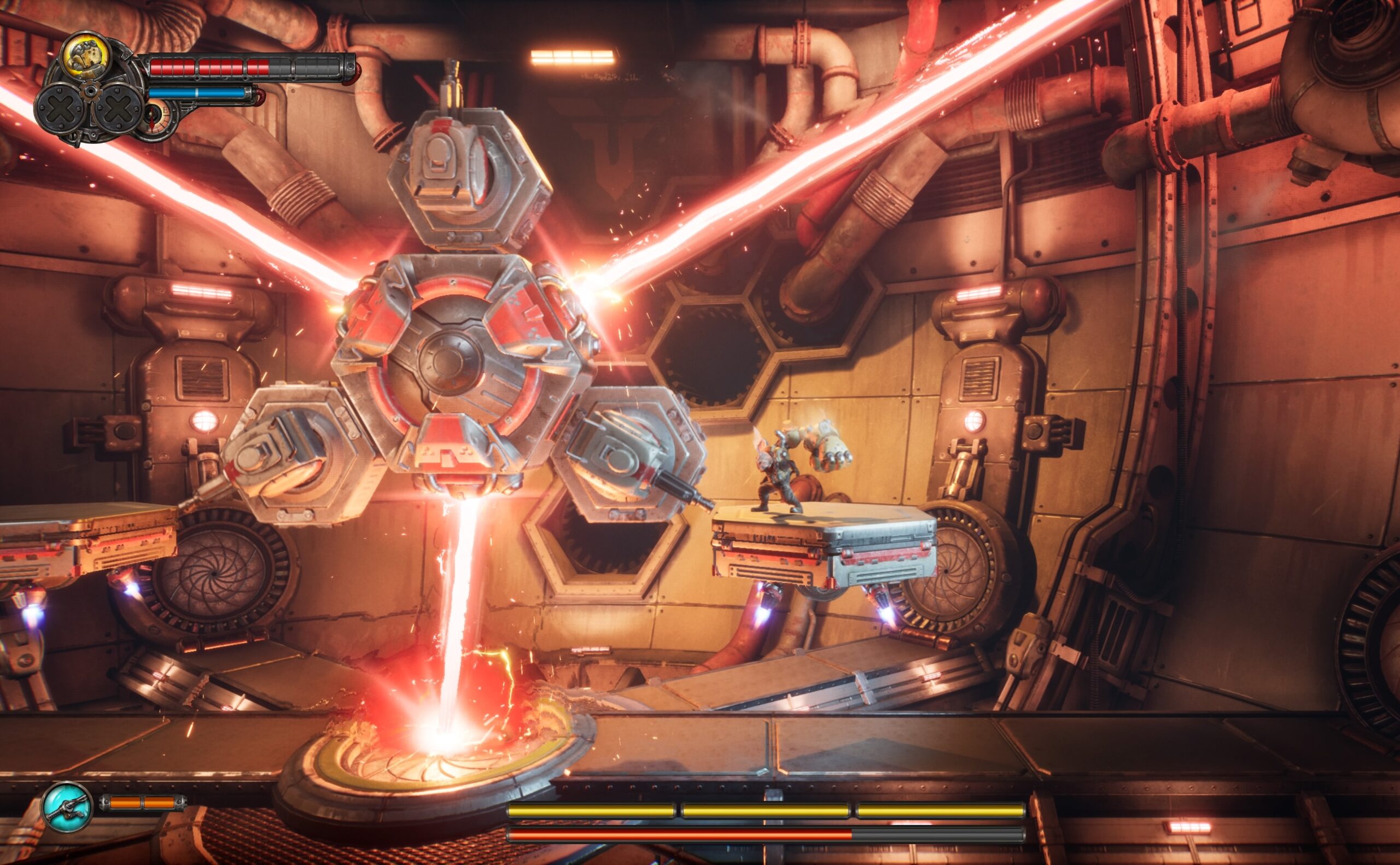 For as good as F.I.S.T. looks, it plays. Bunny by nature, Ray is an agile fellow and controls like a dream. In this particular genre, movement is paramount, due to the long hauls and backtracking often required. Our boy Ray is more than up to the task, offering the player not only a solid sense of speed and taut control but also rapidly receiving access to acrobatic abilities that keeps progress across the huge game world fast and engaging. And while the double jumps, air dashes, and wall slides might all have been ripped from The Big Book of Metroidvania, where F.I.S.T. brings the innovation is in its surprisingly deep combat mechanics.

Ray starts out his quest with just his big ol’ fist, the last remaining component of his former war mech. F.I.S.T integrates a combo-based combat system not dissimilar to fighting games, encouraging the player to lay waste to The Iron Dogs with power punches, air-jabs, diving axhandles, and running haymakers, all rounded off with meaty finishing moves. As Ray upgrades his abilities, he is afforded more varied strikes, leading to the application of FGC favorites such as wall-bounces, parries, juggles, even air bursts. As new weapons and sidearms join the fray, and enemies become tougher and more numerous in number, players soon find themselves putting a hurtin’ on a menagerie of menace, slickly combining the moves, weapons, and skills at Ray’s disposal to clear a path, punctuated with cathartic sound and a genuine sense of impact. F.I.S.T.‘s combat is familiar yet refreshing. It’s one of the most satisfying efforts the genre has seen.

There is little that F.I.S.T. does wrong. It has a superb sense of pace, brilliant visuals, a compelling game world, and engaging action. The story itself is by the numbers, hitting many familiar tropes and following a fairly recognizable three-act pattern. This adherence to the obvious can be somewhat forgiven, as it is in keeping with the doom-laden, noir narrative, given further form with a number of high-quality CGI cut-scenes.

While “gangster rat” or “sexy femme fatale cat” won’t win any originality awards, most players will find delight in the furtizens’ solid voice-acting, neat visual designs, and wry comical tone. They’re all very endearing and sympathetic. For all of its gloominess, F.I.S.T has a vibrant “Saturday Morning Show” feel to its world, characters, and narrative, reminiscent of classic anthro shows of the ’90s. Bucky O’Hare by way of Alan Moore… if you’ll forgive me. (You won’t forgive me.) 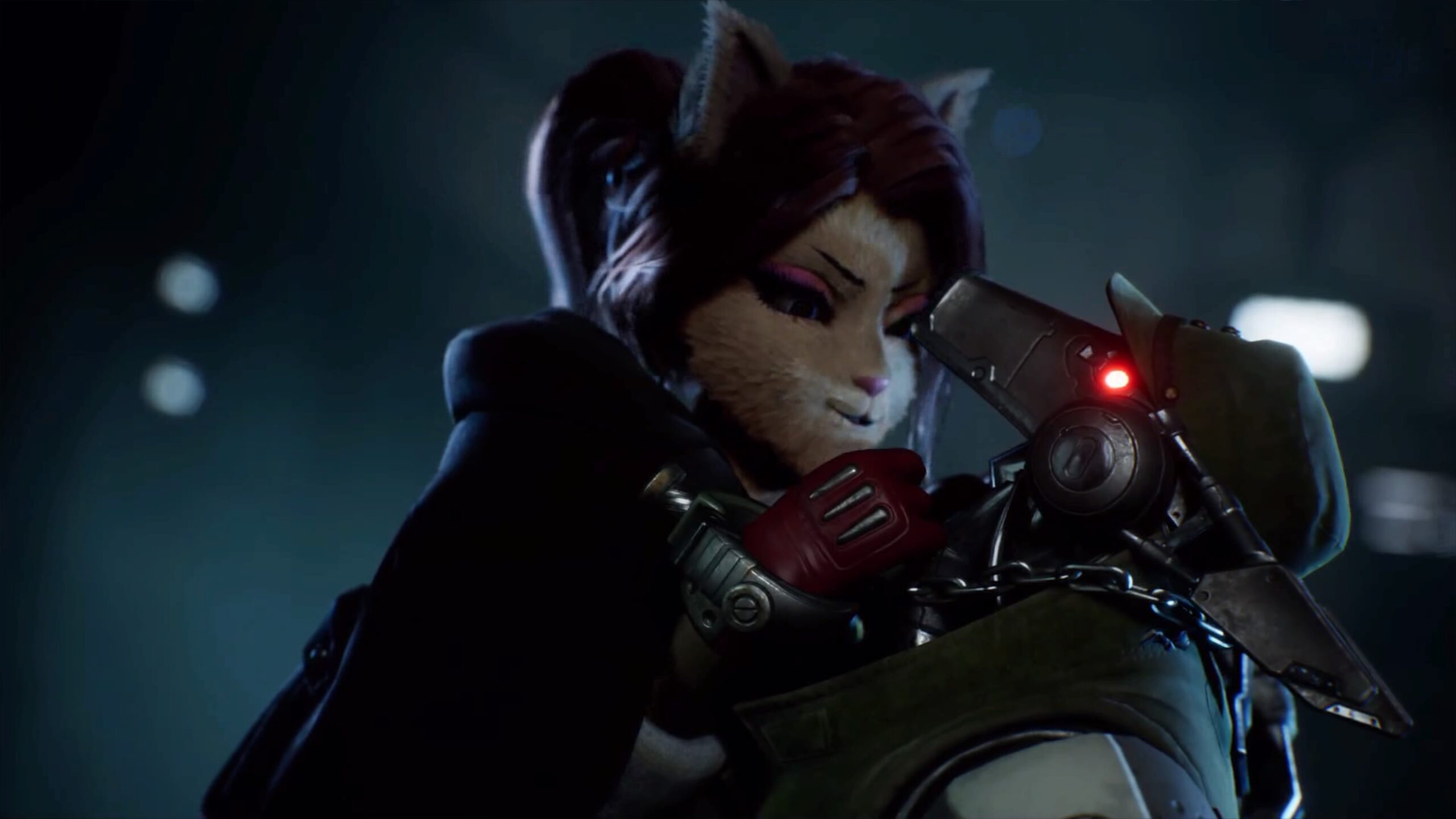 When a mid-tier studio launches a AA title featuring an unproven IP, it’s a hell of a risk, one that has (sometimes unfairly) brought an impromptu end to both studio and IP. In the case of F.I.S.T. Forged in Shadow Torch, this will not happen. TiGames has created an electrifying entry to the genre, ticking every box that makes a Bloodstained or a Castlevania fan feel warm and fuzzy, while ensuring that its own design ideas, intriguing universe, and smack-’em-up action are as notable as any of the title’s more familiar tropes. F.I.S.T. is one of my favorite games of 2021. It deserves to be a success, deserves to be widely played, and deserves to rank among the year’s best releases.

F.I.S.T.: Forged in Shadow Torch is an exemplary action-adventure, packed full of heartfelt detail and design, daubed in a grimy-yet-absorbing aesthetic, and powered with punchy, satisfying combat. While some of its elements will be over-familiar to genre fans, the originalities still shine through, resulting in a brilliant-looking, great-playing metroidvania that will delight players, whether they have a fluffy tail or otherwise. Heed my words: It’s most definitely wabbit season.