More than half a year ago, Atlus’ Shin Megami Tensei: Persona 3 was released, and its intriguing story and characters, high production values, and gun-to-head action had gamers dusting off their PlayStation 2s. We played it and loved it. Not too long after, it seemed like everyone was scrambling to find their own copy of the game, and the Shin Megami Tensei: Persona series and Atlus enjoyed the spotlight.

It wasn’t long before word got out that Japanese gamers were enjoying a sort of “director’s cut” called Persona 3: FES, which contained a new 30-hour chapter called Episode Aegis. American fans looked to Atlus with puppy dog eyes, and in late February, after a bit of teasing, Persona 3: FES was announced for the US. They decided to include the original game and the side story on one disc, and released it as a “thank you” to fans for the price of $29.99.

We take a look at this new package in our review. Is this disc worth a purchase for those that already own Persona 3? Should new fans start with FES? And, what the hell does FES stand for anyway?

[Note: As we have already reviewed Persona 3, please refer to our original review for details on the story and gameplay. This review focuses on the additional content added in FES.]

Atlus says that FES stands for “festival,” and Persona 3: FES is like a festival of gaming value. Not only are you getting the somewhat hard to find Persona 3 in its entireity, but you’re also getting the second standalone game, Episode Aegis. On top of that, FES is a sort of expansion pack for the original game, which adds more quests, events, costumes, several more Persona, and a “hard” [Ed’s note: Wasn’t it already hard enough?] difficulty mode. 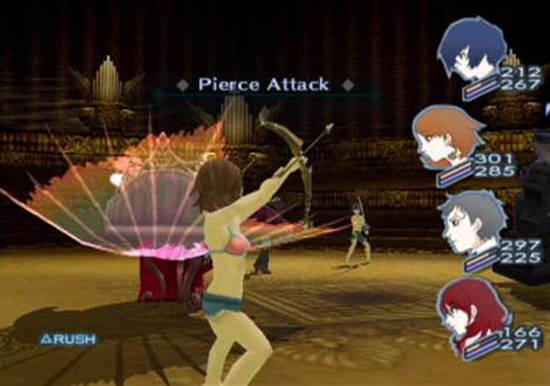 The original story, Episode Yourself, and this new addition, Episode Aegis, have been renamed The Journey and The Answer respectively. Those with a save file from Persona 3 have the option of loading this file when starting the The Journey. This allows you to play through the original story with the added benefit of keeping some of the hard work you put into the 70+ hour RPG. You won’t with everything, but those registered Persona and maxed social links will still be there.

The Journey isn’t exactly the same as Persona 3. There’s new character interactions throughout, and they move around quite a bit more than they used to. If you’re revisiting the world of Persona, do yourself a favor and forget about where you used to find in-game characters; they’re probably not there anymore. The dialogue and questions have also changed. Overall, you’re still getting the same story as the original game, but the new items, costumes, and small changes keep things lively for repeat players. Wait until you see Yukari’s “high-cut armor!”

In The Answer, you play as Aigis, the increasingly human android developed by the Kirijo Group. Aigis somehow gains the same ability the main character had in The Journey, and can now summon multiple types of Persona. It seems that the whole cast of Persona 3 is stuck back in the dorm, unable to leave. They somehow have become caught in a time loop, forcing them to live out one very long March 31st. They’re guided by Metis, an android sister that Aigis never knew she had. She tells them that a distortion called the Abyss of Time has appeared underneath the dorm. The SEES team sets out to uncover its secrets as well as find a way out of the time loop. 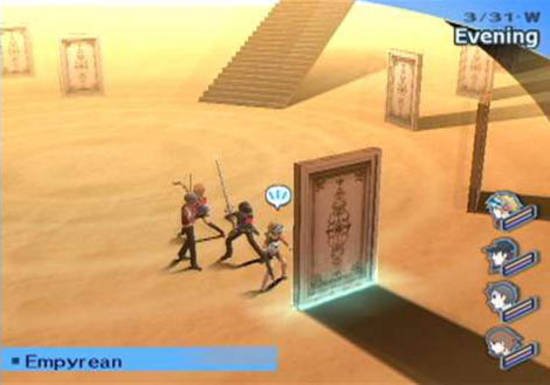 Gameplay remains similar to the original title in The Answer. You’ll still guide your team of four Persona users through very Tartarus-like dungeons in the Abyss of Time. In them, you’ll still battle and summon Persona against Shadows, eventually making your way to epic (and long) boss battles.

The main difference is that the difficulty has been increased overall. Battles are a bit tougher this time around, and healing and replenishment items are much harder to come by. If you learned anything in the original game, it’s that a bit of grinding is required before boss battles. There are fewer boss encounters in The Answer, but level grinding is that much more important to conquer each of them.  And there is no Persona Compendium in The Answer. You can still mix and match Persona to your heart’s content, but don’t expect any do-overs; no option is provided.

As far as the battle system goes, there are several improvements. There’s new weapons that can be formed from Persona, new items, and even a customizable music playlist for your dungeon crawling pleasure.

Just as in Persona 3, you give general commands to the rest of your party, and it’s ultimately up to them on which specific actions they’ll take. It used to be that sometimes your own party would leave you up a creek with bad “choices,” but it seems that they’ve made your team a bit smarter since then. For example, if you learn that a certain enemy will fall to ice magic, your team will now be smart enough to use ice magic every time, opting to knock down your characters right off the bat. They’ll also be more attentive to your healing needs this time around. Granted, your team (and the AI) will still occasionally throw out the unhelpful command.

Persona 3: FES still looks and sounds as great as the original did. The battle and map graphics are sharp and detailed, and the same classy and hip design sense makes it back into this title. The designs for the new Persona are as messed up as ever, and the new characters, like Metis, look great. And wait until you see the last boss — talk about weird! On top of all of this, The Answer sports several anime sequences, including a fantastic finale. All of this is set to several new tunes and couple of nifty remixes of familiar old ones.

Almost nothing could be said about The Answer’s story that wouldn’t spoil it for anyone reading this review. Just know that you’ll fight most of the time, with very little character interaction. This time around, there’s no school to attend to, as you’re stuck in the dorm. The story unfolds in pieces after each major battle, and you’ll be hit with a couple of unexpected plot twists before it all ends. In the end, The Answer does a wonderful job of tying up loose ends from the original game.

Persona 3: FES manages to take one of last year’s best RPGs and make it even better, trumping the original with loads of gameplay and fantastic value.  For newcomers, a mere $30 buys them easily over 100 hours of impossibly engaging role-playing action, giving them an incredible price on what is probably the best RPGs for the PlayStation 2. And fans of Persona 3 will definitely want to pick this up to witness the satisfying conclusion to the story, as well as all of the stellar new content. Do not miss this game.

Score: 10.0 (Incredible. As close to perfection as we’ve yet seen in in the genre or gaming on the whole. A polished, unparalleled experience. )