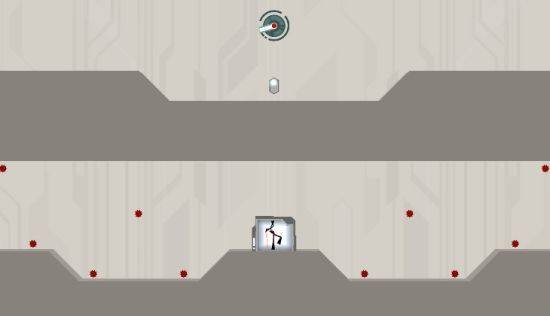 If you haven’t played the original N, then that’s great. Well, it’s not great, since you’ve essentially missed one of the greatest flash games ever created, but it’s great that you’ll be able to go into N+, the game’s updated HD sequel/remake, with no expectations.

N was incredibly good; N+ seeks to improve upon its mechanics with more levels, better audiovisual components, and a sexier difficulty curve. If you haven’t played N, then you will love N+, there’s no two ways about it. Yet I feel that most of you who are reading this have played the hell out of the original N, and probably enjoyed it as much as I did.

“Is it worth buying?” you wonder. “Why should I pay good money to replay a free flash game?”

Well, to make a long story short, you should buy it, and it is worth the 800 Microsoft points. To make a short story long, hit the jump and find out why.

The original N was a perfect example of brilliantly minimalistic game design. It took only a few individual mechanics — momentum physics and jumping, mainly — but developed and perfected them in such a way that what could have been a perfectly humdrum platformer became one of the most challenging, satisfying flash titles ever made.

N+ is basically a more polished version of N.

It doesn’t yet have as many levels and the first half of the game is probably a lot easier than N vets would expect, but the improved aesthetics and added content make N+ one of the easiest XBLA purchases you’ll ever make.

Graphically, everything has been improved while still maintaining the sexy, minimalist feel of the original flash game. The ninja still jumps around a mostly grey, barren world, but it’s a slightly prettier grey, barren world. The enemy models look slightly cooler, the ninja himself is bigger and has a physics-affected bandana, and when you move to one corner of a stage you’ll see the pseudo-3D edges of platforms on the other edge. Nothing big, honestly, but kinda cool. 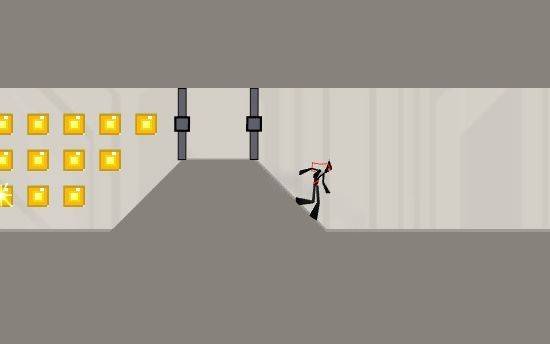 The new audio additions, on the other hand, are even more interesting than the updated graphics. The new 5.1 surround sound really makes its presence known once rocket turrets start firing homing missiles at the ninja, ormachine guns begin blasting at the player from three different angles at once. The audio works exactly as it should: it lets you know where threats are coming from, and the sound is crisp enough that it can be downright alarming to hear some of the enemies heat up their primary weapons. The music is pretty badass, too.

The core N gameplay is still intact, but handles pretty much the same on a joystick as on a keyboard. This is a very, very good thing. The ninja handles beautifully, using momentum and physics to wall-jump, sprint, and long jump to victory. As with the PC version, the controls are responsive to the point of damned perfection. Slick Entertainment knew that N is nothing without its tight, fluid control scheme, and they’ve perfectly ported it to the 360 controller. The ninja is controlled using only the joystick and two buttons (one jumps, the other restarts the level by blowing the ninja up in a glorious display of minimalist, ragdoll gore); the simplicity of the input lends itself to endlessly deep, challenging gameplay as the levels get progressively more complex.

The level design is top-notch, with special care taken to introduce the player to different strategies while building a smooth, gradual learning curve. The original N was kind of easy, then got really, really hard a few episodes in. Not so with N+. The first half of the game (roughly) teaches the player very specific techniques to use in the more challenging later levels: an early stage might exist only to teach the player how to jump off a ramp, while another only forces the player to learn the nuances of wall-jumping. N+ wants to be challenging — and trust me, once you get past episode 25 you won’t be complaining about lack of challenge — but even more than that, it wants players to be prepared for those challenges. By the time you get to the really hard bits, you’ll have learned all the skills and strategies you should need to get past them. 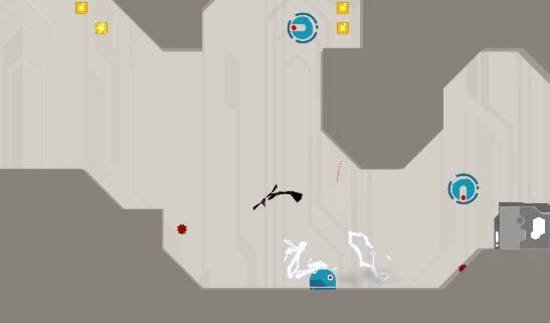 As it stands, however, there aren’t quite as many levels in N+ as there were in the original.The flash game had around 500 levels, where N+‘s singleplayer campaign only has about 300-400. Now, 300-400 levels of a quality game like N+ is nothing to be scoffed at, and after Kellee Santiago’s talk I’m loathe to judge length and value as equals. Still, given the fact that many of the levels are training based and many of the others rely far too much on backtracking (it’s challenging to run through a blisteringly difficult level, flip a switch, and then run aaaaall the way back, but it’s also needlessly frustrating), I nonetheless thought it worth mentioning to the die-hard singleplayer crowd.

The game includes a really intuitive level editor, but as of this writing there are nowhere near as many awesome user or developer-created downloadable levels for N+ as there were for N, nor did there seem to be any immediate way to share my levels with my friends. If it’s there, I couldn’t find it; if it isn’t there, it most definitely oughtta be.

If you’ve got some friends with N+, then get ready for some really badass multiplayer. Players can play cooperatively through the massive singleplayer campaign (thus defeating the purpose) or the fiendishly clever co-op levels. These levels typically separate one player from the rest and force the other three to survive or support him while the final player hits the switches necessary for his comrades to make it to the exit. I’ve played through about half the co-op levels, and they’ve generally been suspenseful, fun, and utterly challenging affairs.

Add to that a PvP racing mode and a white-knuckle survival mode, and you’ve got a much more substantial multiplayer experience than we’re used to seeing from an XBLA title.

All in all, despite some level design and DLC uncertainties, N+ is absolutely a must buy for any self-respecting 360 owner. N+ adds lots of new, great stuff to an already incredible platformer; with its multiplayer modes, level editor, and wonderfully intuitive-yet-deep controls, there’s enough here to satisfy diehard N fans and franchise newbies alike.

N+ is the ultimate indie platformer.