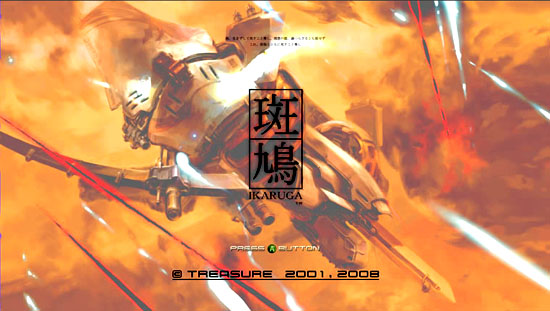 After a great deal of anticipation and a painfully long wait in the certification line, Ikaruga finally arrived on Xbox Live Arcade last week. Boasting new high-definition graphics, online co-op, and the ability to save and share game session replays, it’s not difficult to understand why so many 360 owners have been eagerly awaiting this classic title’s rebirth.

As most of our readers know, I am certainly no exception. My love for Ikaruga runs deep, and thusly makes this simultaneously the easiest and most difficult review I’ve ever written for Destructoid. On one hand, I know this title inside out, and I’m both thrilled and honored to be writing about it. On the other, I’m faced with a dilemma. How does a man objectively review his favorite game of all time?

My intention, therefore, is not to review Ikaruga, but to review the XBLA version of Ikaruga. I’ll do just that after the jump.

When booting up the game for the first time on an Xbox 360, there is one aspect that immediately stands out to an experienced player: the graphics. To see Ikaruga in 720p might give seasoned veterans the same sense of awe they felt upon first laying eyes on it almost a decade ago, and should serve to lure newcomers into its deadly embrace with promise of more stunning visuals.

As a game that made its debut reasonably late in the Dreamcast’s life cycle (or what is commonly accepted as its life cycle), Ikaruga has always been exceptionally beautiful. 3D graphics coupled with 2D gameplay was a relatively unique thing to see in 2001, and Treasure’s choice of color palette made it stand out even further among the rainbow-laden shmups of its time, like Mars Matrix or DoDonPachi.

The high-definition graphics can make the game a bit easier to play, as hitboxes are more clearly defined and players might find it easier to navigate the constantly changing landscape and curtains of enemy fire. At the same time, however, you might become so preoccupied with ogling everything on screen that your attention is is drawn away from the fact that it’s all there to kill you. This certainly takes some time to get used to, and it might require a few days of regular play before you can sink in and truly focus on gameplay. That’s not a gripe, it’s a compliment. 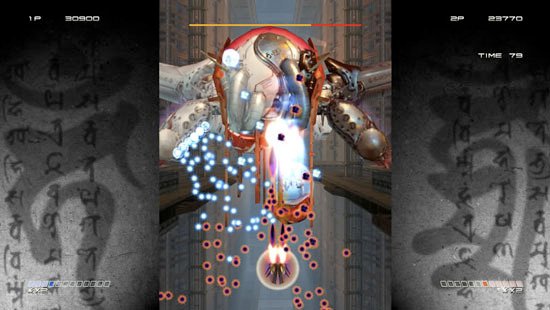 Speaking of gameplay, this is the one aspect of Ikaruga that has, thankfully, remained almost entirely unchanged. Experienced players will find that it’s but a short few runs before they can settle in and find their old groove, cruising through each level in the very same way they would have on Dreamcast, GameCube, or in the arcade. I say “almost unchanged” because there is one thing that has been tampered with, and those of you who are familiar with Chapter 3 know exactly what I’m talking about.

It’s called the Shigi Chase, and it’s one of the most notoriously difficult parts of the game. Shigi is the miniboss who shows up toward the end of chapter 3, and chases your ship through a series of quickly closing gates. Provided you can survive this maze (the gates close at random within a tunnel filled with smaller enemies), and survive Shigi barreling past you to the top of the screen, you’re faced with the challenge of defeating him while he fires a steady stream of dual-colored bullets from the center, surrounded by 4 rotating lasers, also of both polarities. It’s the part of the game where even the best players are apt to lose a life or two, and in the XBLA version …

This was difficult enough in the older versions of the game, and to finally conquer it and learn to come out of it unscathed was a very satisfying feeling. Newcomers won’t know the difference, but experienced players will have to relive the forgotten horror that is Shigi until they manage to learn this mirrored section. I have to wonder why this was changed when the rest of the game is entirely untouched. Part of me wants to be angry about the fact that someone has tampered with the formula, but at the same time, I can appreciate the desire to add new challenge to a new version of the game. Looking at the XBLA leaderboards, there are screen names I recognize from Ikaruga forums like the one found at Ikaruga.co.uk, and it’s apparent that everyone’s score is suffering while we get accustomed to this. 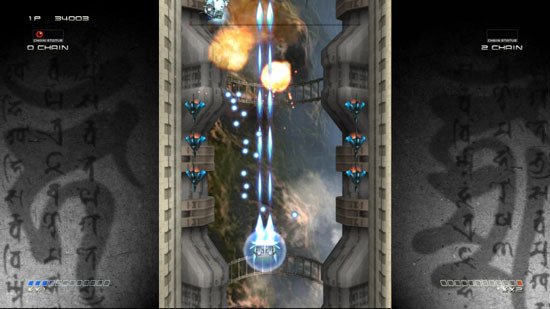 In addition to keeping an eye on each other’s scores, the other new feature in this version is the inclusion of an online co-op mode. It’s the thing we were all hoping for when it was announced that the game would be ported to XBLA, and it’s wonderful … when it works. Ikaruga‘s co-op mode suffers from lag at times, and that lag can range from slightly annoying to downright game-breaking. I’ve played with several people on my friends list, and this normally amounts to nothing more than some minor slowdown on some of the more manic levels, but there have been sessions in which I could press a direction on the D-pad and fully count two seconds before my ship even twitched. This kind of delay made it thoroughly impossible to play the game, and while the online is funtional in most cases, I wouldn’t recommend pairing up with anyone who doesn’t have a lightning-fast internet connection. It’s simply not going to happen.

The other thing that hasn’t changed much in this port is the game’s audio, and I’m delighted to be able to say so. The game’s Director and BGM Composer, Hiroshi Iuchi, put together one of the most beautiful and memorable soundtracks ever found in a shooter, and it has remained intact down to every note. Also unchanged are the robust explosions heard whenever something is destroyed, whether it be an enemy ship, a boss, or you. When the game originally launched, it was hailed for its magnificent explosions (which were awesome enough to feel like a fair reward for beating each boss), and the sound each enemy makes when it’s blown into oblivion is just as satisfying as ever. The only thing that could have made them any better would be to hear them in surround sound, and that’s exactly what the team at Treasure did by including support for a 5.1-channel audio system.

In short, this is Ikaruga. This is Ikaruga as it should be, as it was meant to be. The visuals are in high-def, but unchanged. The audio is in surround sound, but unchanged. Treasure did something amazing when they created this game. Even more amazing is that it was built from the ground up by a team of only 4 people. Ikaruga is a glorious work of art; one rich with spiritual metaphors and a storyline that encourages players to counquer themselves and press on toward victory. It combines haunting music with gameplay that is nothing short of beautiful in its difficulty and visuals that blend feminine grace with sharp, hard-edged masculinity, and it somehow manages to deliver all of this in the form of a vertical shooter. 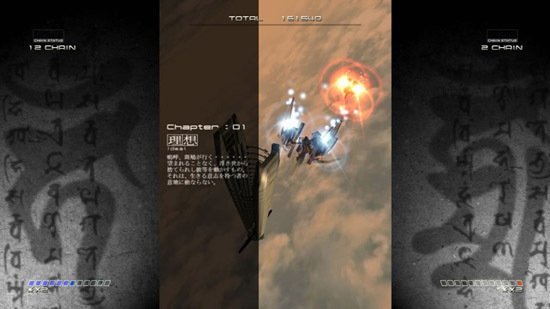 There is nothing I can say that will do justice to my love and appreciation for this game. This makes it hard for me to have to demean it with a numbered score, because I cannot give it a 99/10. As a journalist, it is my job to take into account things like the lag problem, things that could lower the game’s overall score. However, by the same token, I must also consider things like the XBLA library and where this game fits. What is its place? How does it rank among the other titles available on its respective platform? Ultimately, what you want to know is whether or not the game is worth your money. Why you should choose it above another option. It is my hope that I have succeeded in helping you make that decision. As for the number, I have to take into account Destructoid’s stance on reviews, and our use of a true 1-10 scale when it comes to scoring a game. There was a lot to consider, and believe it or not, I actually had a very hard time deciding what that number should be.

After deliberating, I cannot, in good conscience, give this game anything but a perfect score. Whether you enjoy shooters or not, it is simply something that must be played. Treasure created a wonderful experience, and has delivered that very same experience to the 360, perfectly intact, accomplishing far more than it aspires to do, and offering much more than just a shmup.

Score: 10 (Incredible. As close to perfection as we’ve yet seen in in the genre or gaming on the whole. A polished, unparalleled experience.)