I had almost lost hope. Almost. You know what article I’ve had sitting in my queue for almost two months? It’s called “Requiem for the Single Player Campaign”, and it was gonna be good ol’ Linde up on his soap box complaining about an industry so tied up with multiplayer and pwning bitches that I thought the great struggle for effective storytelling in games was getting swept aside. Three days ago I would have argued this passionately, even angrily, bemoaning the state of gaming with an array of charts, graphs, and PowerPoint presentations designed to illustrate the gradual decline of genuine creativity within the industry over the last few years. Ask me tomorrow and I’ll likely just mumble “BioShock” and crawl back into my cavern of half-baked elitism. It’s a game that will bring any cynic to their knees.

You worry, writing something like this — worry over how overwrought it might sound, of angry accusations of “fanboy!” accompanied with torch and pitchfork, that kind of thing. Just believe me when I tell you that it’s not without merit. BioShock is truly about as good as it gets. 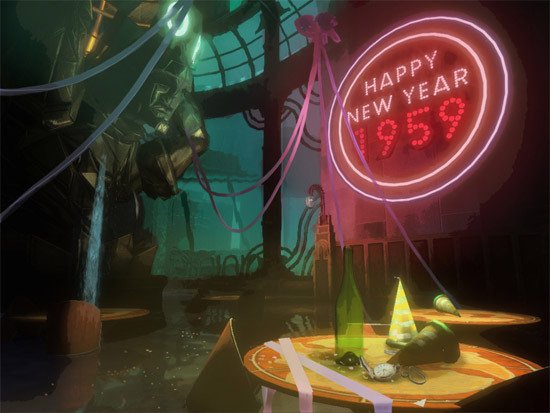 The first character introduced to the player in BioShock‘s sprawling narrative is the unnamed protagonist, plummeting down into the sea after his plane crashes over the mid-Atlantic. His refuge, Rapture, is the second. After making your way out of the waters and onto the deck hanging off of the monolithic tower in the middle of the ocean and venturing inside, it becomes quickly apparent that Rapture isn’t just a place where BioShock, y’know, happens — no mere backdrop, the doomed city and all of the philosophies, ideologies, and excess inextricably bound to it infuse every moment of play within the game.

Those of you who’ve played the demo (or, like me, tracked down one of them criminal copies leaked onto the market prior to street date) know that moment: creeping into the dark of the tower, the door shutting behind you, the lights clicking on in measured succession. A colossal statue of Andrew Ryan, creator of the underwater utopia, hangs ominous over your route downward, holding a massive banner that reads “No Gods or Kings, Only Men”. An appropriate introduction to the city of Rapture, where just about everything — the characters, the artwork, the music and the masterful level design — aims to realize this world for the player in breathtaking detail.

From the moment you start the game to just moments before the ending, BioShock never tears you out of first-person view. No cutscenes, no camera zooms, nothing — everything from behind the eyes of the protagonist. Similar to Half-Life, this choice serves well to amplify the atmosphere and immersion you’ll feel as you make your way through Rapture — a notion absolutely key to the BioShock experience. Most of the “action” has happened long before your arrival, which puts quite a bit of weight upon the environment and audio logs to convey the story, which it does phenomenally well. Through the audio logs, radio transmissions from a very limited cast of NPCs and the set pieces scattered throughout the city, the history of this once magnificent monument to excess is pieced together by the player, resulting in one of the most organic and effortless narratives since the game’s spiritual predecessor, System Shock 2. Moreover, BioShock features one of the most compelling plots I’ve ever seen in a game — a brilliantly measured story delivered at the perfect pace.

Nothing tells the story quite like the city itself, however. Established as a utopia in where citizens were promised absolute freedom to research, create, and build, Rapture now stands in ruin, utterly destroyed by its own decadence. Propaganda on the wall reinforces the Randian philosophies at work in Rapture — take everything for yourself and leave nothing for anybody else — and the advertising promising citizens the best life they could ever hope for is scattered everywhere. Evidence of comings and goings, parties, and life in general is found in every nook and cranny throughout the game. Messages written in blood are found on the walls and floors, and hey, here’s an audio log to accompany it. With BioShock, it’s not so much about telling a story as it is letting the player experience it. 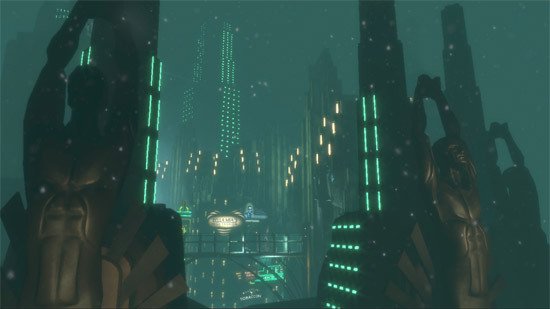 Rapture is so thoroughly realized that it genuinely feels like a place that very well could exist — not so much something created by the art and design team, but rather lifted from some preexisting pocket of hell deep under the ocean. It’s an absolutely stunning game with some of the best graphics you’re likely to see on the 360, bringing to life the gorgeous art deco environs of the city. You’ll hear footsteps, mumbling, and the creak of metal buckling under thousands of pounds of pressure. The level designs are top notch and filled with crap to pick up, search, sift through and explore. Nothing is extraneous; no item, no prop, nothing seems out of place. Rapture is — or was, anyway — a living, breathing place, and is absolutely breathtaking to behold. It’s also claustrophobic, dark, wet, and terrifying, which makes it a perfect place to be hunted by the genetic mutants who want to peel your skin off.

Simply put, BioShock is a FPS. Owing to its roots in System Shock 2, however, the game is also one of the most interesting takes on the genre I’ve ever seen. Through your travels in Rapture you’ll stumble across six weapons, each with three interchangable ammunition types, all of which can be beefed up at upgrade terminals stationed throughout the city. You’ve also got a huge amount of genetic and personal upgrades at your disposal, which can be found, researched by photographing enemies and technology, invented or purchased with ADAM — I’ll get to that in a minute. You’ve got a limited number of slots to equip these abilities, however, which makes for ample opportunity for character customization. Do you want to increase your melee power or reduce the damage you take from fire? Speed boosts, sneaking ability or both?

Plasmids add further complexity to the FPS experience. By finding or buying new plasmids, you can equip a wide variety of abilities that will allow you to freeze, enflame, or enrage your enemies. You can mark them as security targets or cover them in swarms of fucking bees. Combining these skills with the variety of weapons and upgrades you can equip makes for some extremely interesting opportunities in dealing with your foes, and you’ll need all of ’em, especially if you want more ADAM to purchase new abilities. If you want ADAM, you’ll have to claim it from the Little Sisters who scour the hallways of Rapture, gathering the blood of the dead to be recycled for the precious resource. And if you want to get to the Sisters, there’s a big, scary bastard you’ll have to get through first. 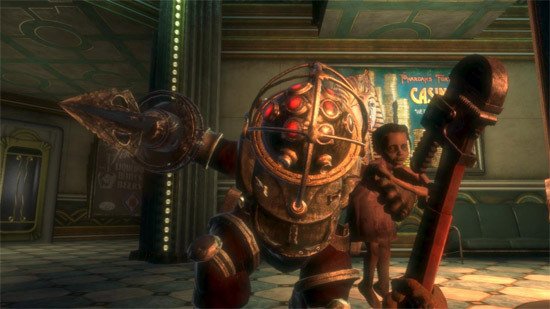 The Big Daddy battles are some of the finest moments in BioShock. You’ll encounter a set number of them on every level, and they come in two varieties: the iconic Bouncer, who carries a drill and is featured in most BioShock imagery, and Rosie, who wields a rivet gun. Both brands of Big Daddy fight in altogether different manners, but neither can be dealt with swiftly or easily — the first encounter with a Big Daddy, a Bouncer, is likely to be marked up as one of the most intense experiences in gaming. They’ve got a staggering amount of health, beefy defense, and are awfully spry for such hulking bruisers, particularly the Bouncer. To survive and succeed, players can use any combination of plasmids, abilities, weapon and ammo types to bring down the Daddy, and it’s up to you how you want to do it.

Unlike many other games that tout “multiple ways to play”, BioShock actually brings this feature to the table, thanks in no small part to the huge array of weapons and abilities it offers. There’s a lengthy list of different enemies, traps, security devices and bosses to be dealt with, and with each encounter is a new opportunity to try something new. The absolutely outstanding enemy AI ensures that no battle will be quite the same — they will give chase, run away if heavily damaged, seek water if en fuego, and find new and interesting ways to tear you to pieces. The game encourages and rewards using all of your resources and the environment itself to your advantage, so much so that combat is never, ever boring in BioShock. The controls are tight, the keymapping effective — this, mind you, coming from a guy who typically abhors console first-person shooters — all in all, an absolute blast to pick up and play.

On top of this solid foundation is an amazing amount of polish. Water cascading down the POV and leaving small droplets behind, the sound of your protagonist coughing as he walks through a cloud of dust, and the way your point of view staggers and is knocked back by the crushing blow of a Bouncer. A few of the Splicers, warped by extensive genetic modification, will even scream “I am good enough!” and other tidbits of story context at you before they strike; a small touch, but one that really brings to light the culture of excess and outrageous expectations that the people of Rapture once placed upon themselves. These little additions really draw you in, even if you don’t notice them right away — they serve to make the world of Rapture seem that much more real.

I could certainly draw attention to some extremely petty faults like the occasional audio glitch (nothing more than an absence of sound once or twice), the lack of a player’s shadow, and the somewhat shallow ending, but I’d feel kinda silly doing it. Vague disappointment over the game’s very final minutes doesn’t lessen the impact of the preceding 14 hours. BioShock is to the FPS genre what Super Mario 64 was to platformers, what Chrono Trigger was to RPGs — such a drastic leap forward that you wonder if it will ever be topped. Whether it will or won’t be is largely irrelevant; what matters is that, after BioShock, the first-person shooter will never be the same. 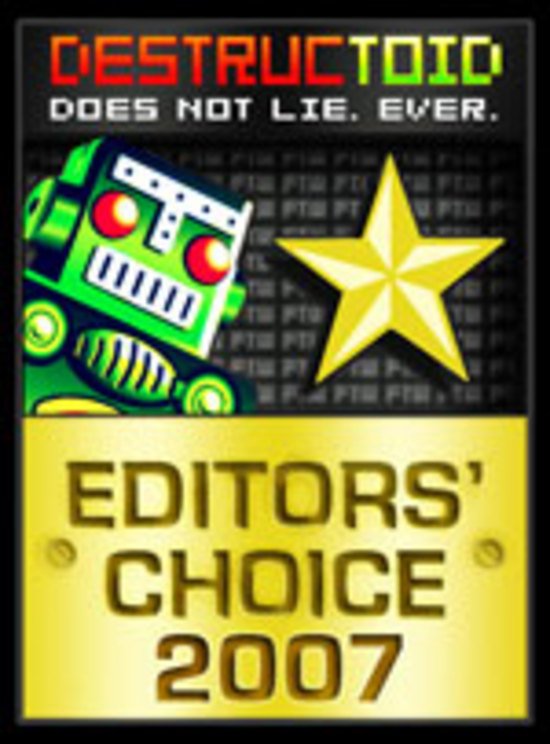