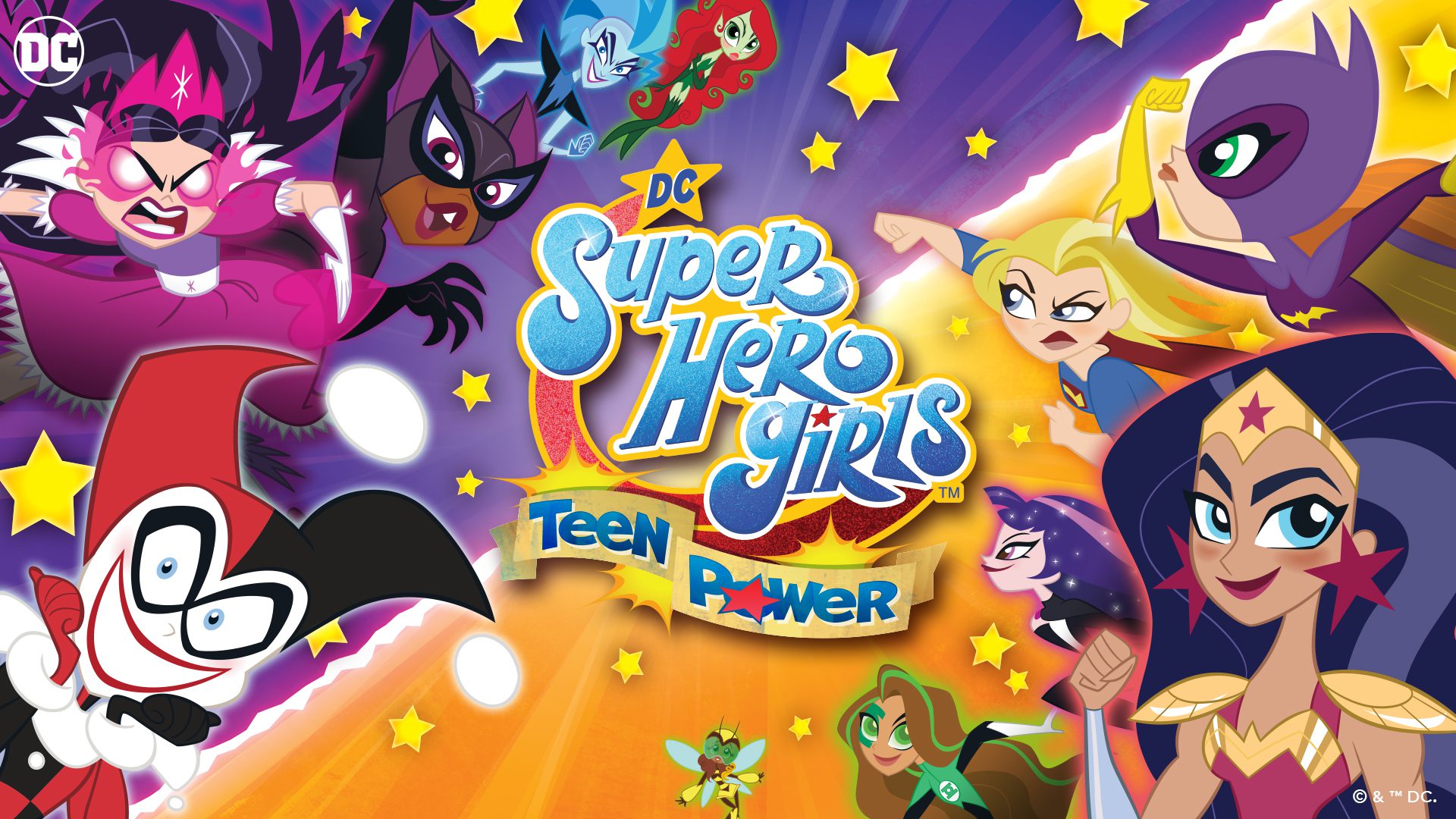 There has been a big, Riddler-sized question mark over the head of DC Super Hero Girls: Teen Power since it was first announced back in February. And I get that. This industry has a long history of subjecting gamers to middling or downright awful licensed games that rely on the appeal of the tv show, movie, or comic they’re adapting to overcome a lack of time and resources granted to developers. Couple that with a $60 price tag, and it’s no wonder so many people are apprehensive about picking this up. 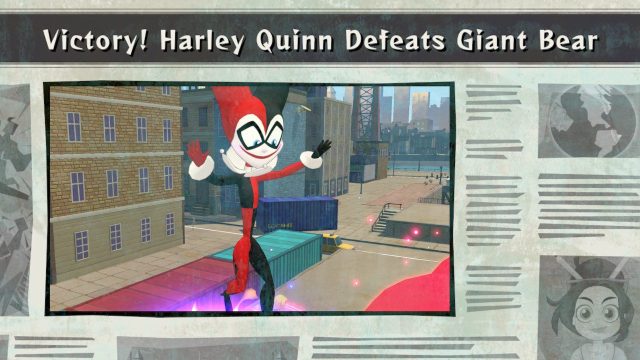 DC Super Hero Girls: Teen Power is a relatively simple sandbox brawler. Taking control of three heroes and three villains from the popular animated series, you’ll work to stop Toyman as he unleashes the most dangerous dolls and teddy bears to hit the market since B.Z. Toys went out of business. Throughout the 10-to-12 hour adventure, you’ll team up with friend and foe alike, smacking down the same couple of enemies with the same one-button combo.

As a brawler, it’s rather shallow. Each of the six playable characters has one melee combo and two special attacks of varying power. For instance, Batgirl can throw Batarangs and unleash Bat-Rockets while Catwoman can whip out her…whip and go on a mad slashing fit with her claws. Two characters can fly (Supergirl and Star Sapphire), while the other four can unlock abilities that can aid in their traversal.

For most missions, you’ll pick your lead character and two AI-controlled partners to back you up. It’s quite repetitive fighting the same few criminals and toy enemies again and again, and only a couple of the boss battles make the most out of the combat system. There is a dodge function that is vital to getting high scores for each encounter, but DC Super Hero Girls is surprisingly demanding in this regard. You have to have exact timing to get the coveted “Just” dodge and it can be difficult to gauge when a lot of off-screen projectiles are headed your way.

Not helping the fact is the camera, which is just awful, and some of the worst AI I’ve seen on the Switch. We’re talking enemies-running-straight-into-a-corner bad, and it affects bosses in addition to common grunts. I also experienced issues where flying enemies would hover way out of reach for my characters for long stretches of time or fly out over the bay where I couldn’t hit them without falling into the water. This ceases to be an issue when you unlock Star Sapphire, as her standard melee attack is a projectile with ridiculous range. She legitimately wrecks whatever little difficulty there is here.

To its credit, ToyBox did create six distinct playable characters. Nobody here feels like a carbon copy, and there is a level of depth to be found in learning the intricacies of how each character moves and attacks. I can appreciate the fact the developer went that extra step. Of course, I threw all that knowledge out the window once I unlocked Star Sapphire, but up to that point, I had a bit of fun familiarizing myself with these heroes and villains.

Except for Harley Quinn, whose bouncy nature makes her more of a liability than an asset.

Outside of combat, you’re free to roam the three small sandboxes – Old Town, Metropolis High School, and Hob’s Bay – accepting requests from residents and completing side missions.  These missions are pretty well split between more fighting and general good deeds, like retrieving balloons for a kid or helping a budding restauranteur discover what foodies are looking for in a good meal. It’s not riveting or anything, but it is a nice break from the battles. When exploring these areas, you’re not in costume, so you can’t just fly, jump, or zip to wherever you want. Because some side missions require you to scope out rooftops, you’ll need to figure out how to reach those areas when you’re in your common clothes. Completing missions will net you skill points you can use to strengthen each character and money that can be spent on new outfits. You’ll also spend some of that cash on restoring Hob’s Bay. At the beginning of the game, some of Toyman’s more destructive creations devastate the area. As you advance the narrative, you’re asked to select new buildings to erect as part of Lex Luthor’s youth-oriented restoration project. The more missions you complete, the more buildings you’ll have to choose from. It honestly doesn’t make that much of a difference in what you build, and because Hob’s Bay is so small, players aren’t given much of an opportunity to make the area unique.

The social media app “Superstapost” also plays a decent-sized role in the game. When not suited up, you can take selfies and other pictures that can be posted for likes and comments on the app. Some side missions will only become available after you’ve acquired a certain number of followers. Posting a lot of pictures will get you there, but you can also snap photos of whatever is trending at the time to make your numbers rise more quickly. Unfortunately, it’s not the most interesting use of the photo mode when the trending topics are pigeons, green containers, or laundry.

It’s a shame ToyBox Inc. couldn’t make the combat more interesting because nearly everything else in this game is spot on. A great deal of attention was paid to ensuring DC Super Hero Girls: Teen Power evokes the spirit of the cartoon. First of all, it looks amazing. The character models and settings of Old Town, Metropolis High School, and Hob’s Bay are bright, colorful, and instantly recognizable to anybody who’s seen the show. It also runs near flawlessly, with only a few minor hiccups in the framerate. In fact, I’d wager this is ToyBox’s most soundly developed game to date. 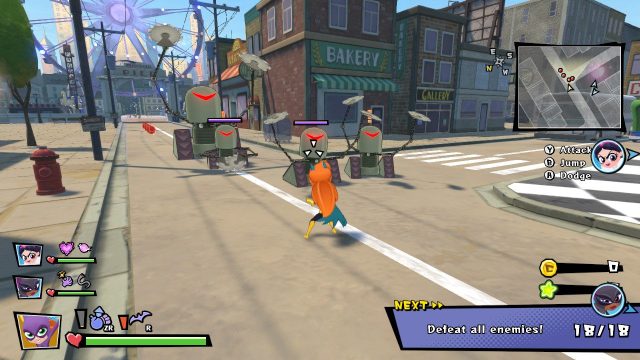 Second, while the game doesn’t have every character from the show, those who do make an appearance here do so with their original voice actor. Even characters with bit parts like Hal Jordan. Not only does this further connect the game to the cartoon, but the characterizations these actors have perfected help elevate what is sometimes a ho-hum script. The story can be amusing, and its episodic structure works well here, but it never quite reaches the cartoon’s frenetic nature.

Part of that is a game like this can’t recreate the madcap animation that Lauren Faust shows are known for. But there is also an issue with the dialogue. Sure, the script is delivered with gusto, and I could honestly listen to Cree Summers do her Eartha Kitt-inspired Catwoman all day long. But some of the dialogue sounds out of character, and lines centered on the Hob’s Bay restoration project are mechanical, like the writers couldn’t figure out how to reference this aspect of the game organically. Though, that could be because restoring Hob’s Bay isn’t really organic in its implementation.

Despite its shortcomings, it’s clear ToyBox Inc. verily regards its source material enough to not just pump out some crappy beat’em up with no soul. A lot of effort went into creating an experience that fans of the show will recognize and respect. Whether or not they’ll find the game to be fun depends on their tolerance for simple combat, poor AI, and repetitive missions. Speaking as a fan of the show, I can say everything the developers got wrong with DC Super Hero Girls: Teen Power didn’t deter me from enjoying everything they got right.