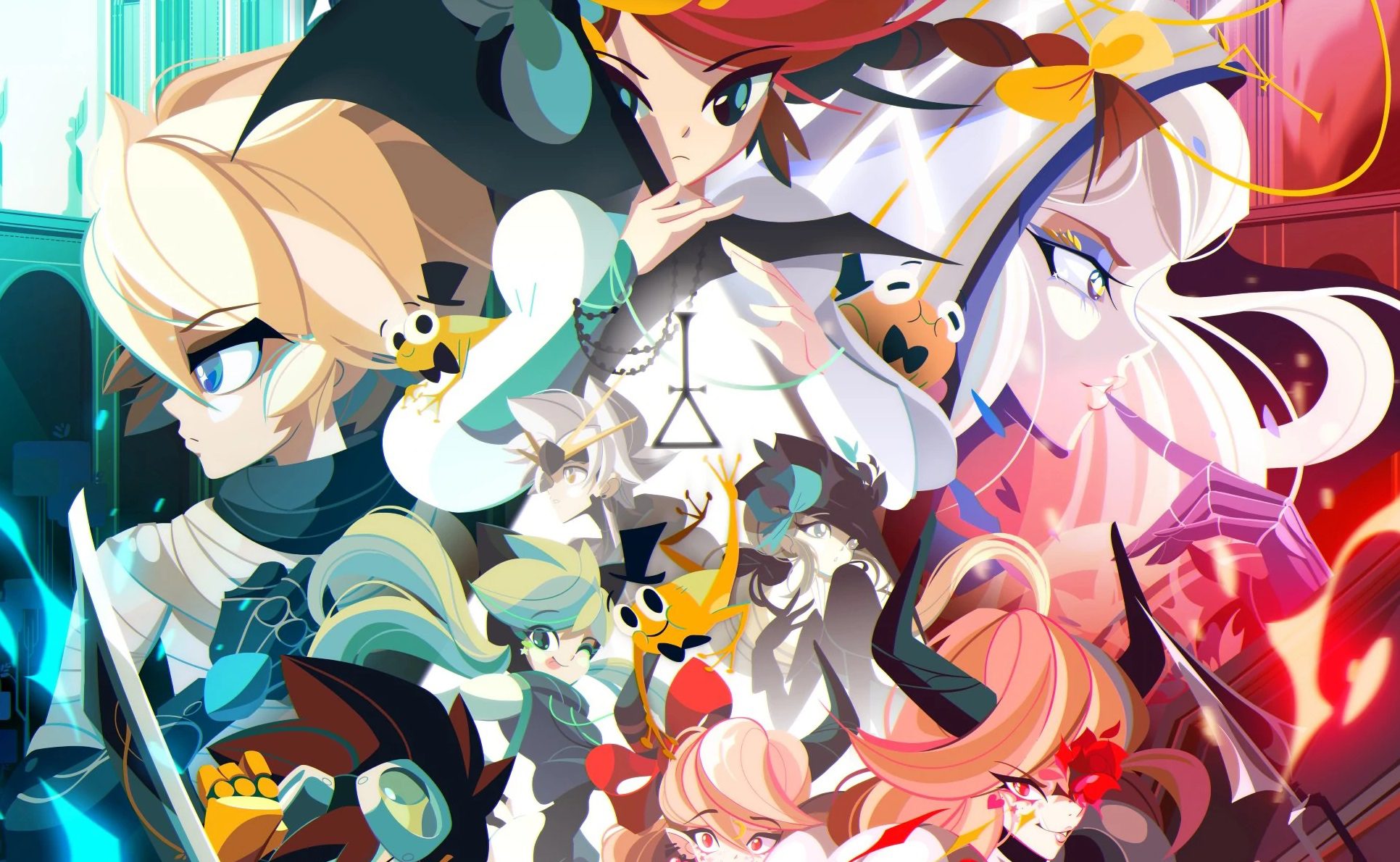 As fiction has long taught us, time manipulation is far more a curse than it is a blessing. Whether you’re the Time Traveller in H.G. Wells sci-fi classic, Dr. Sam Beckett in Quantum Leap, or the irrepressible Wyld Stallyns, you’ll be quickly hit with the realization that control over the past, present, and future unlocks the fate of hundreds, thousands, if not millions of people. For every action, a reaction, and for every sorry situation overturned, you’re just as likely to plant the seed of an even greater tragedy. Sometimes, it seems, these matters are best left to fate.

Take for example young Crisbell, protagonist of Modus Games’ clock-spinning RPG Cris Tales. Crisbell enjoys a hard-working, modest, but pleasant life in the small town of Narim, working alongside her sisters in the orphanage of the Great Lady while trying to remain unperturbed by the land’s larger problems of war, oppression, and class struggle. Crisbell doesn’t have the luxury of being resigned to fate, however, as she is destined for a life beyond her wildest imagination — a life that finds its way to her one morning in the form of dapper talking frog Matias and the awakening of incredible power.

And thus, fate has dealt Crisbell her hand. Armed with extraordinary powers, and accompanied by her trio of new friends, Crisbell is forced to set out from Nasim and into the larger land of Crystallis. It seems that history is on the verge of being rewritten for the worst, and only Crisbell and the clumsy handling of her newfound abilities can save the land’s people from seeing their lives — and fates — bent and twisted into unfair and unrecognizable manner. Crisbell, Matias, Cristopher, and Willhelm might seem ill-equipped to deal with such chrono-chaos, but what they lack in strength and number they’ll make up for in spirit, friendship, and guile. After all, it’s only a matter of time. 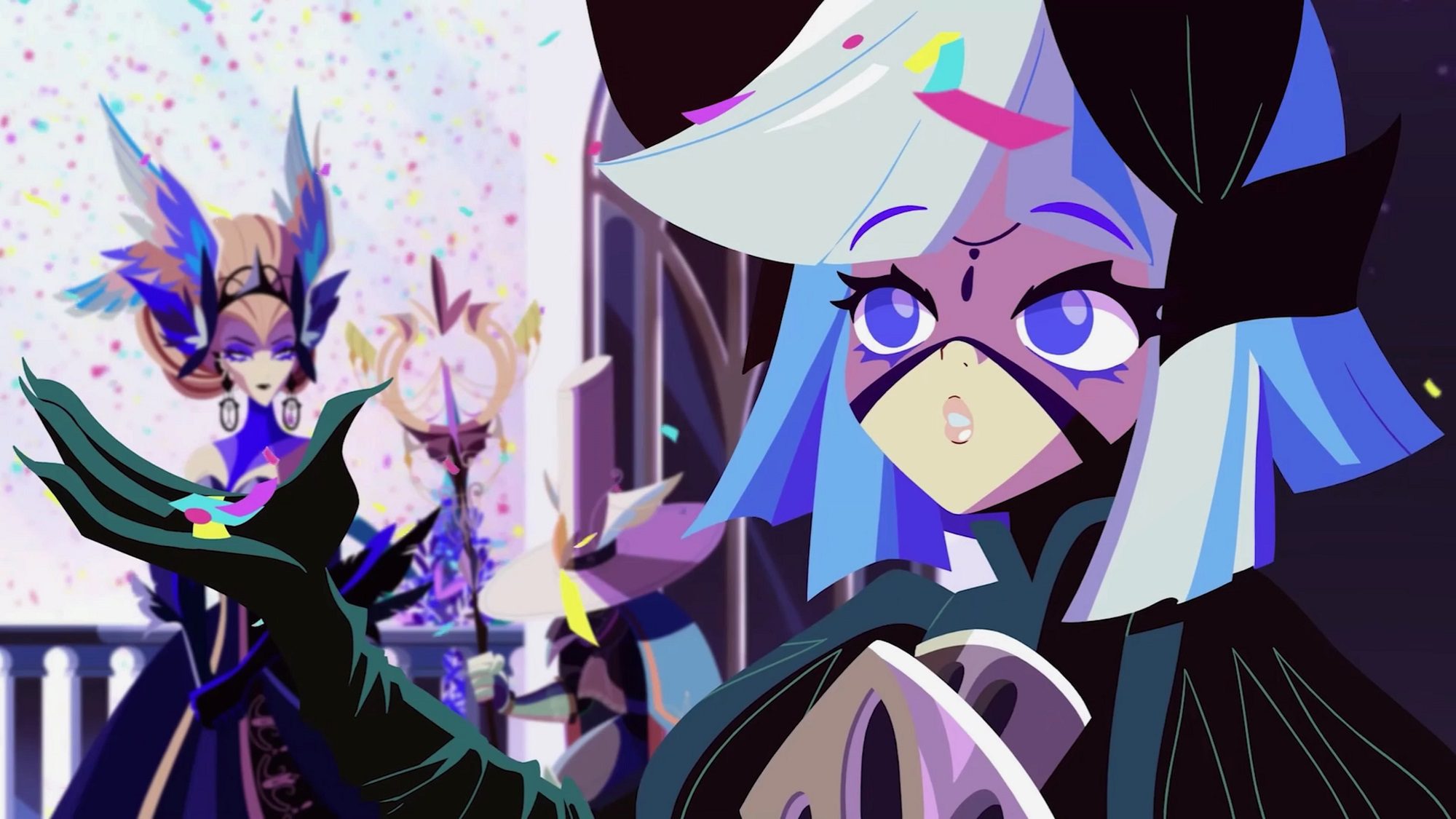 Cris Tales is an unashamedly “classic” RPG experience — the first release of Colombian developers Dreams Uncorporated and SYCK. Driven by high-spirited fantasy and wholesome adventure and powered by an ambitious time-travel narrative, Cris Tales is a passionate love letter to the RPGs of yesterday. Cris Tales is packed out with nostalgic mechanics, familiar character tropes, and a tone that blends high drama and cheerful comedy with themes of bravery, self-worth, redemption, class war, and identity — recognizable tropes to anybody who has spent many hours sat in front of the Phantasy Stars, Final Fantasies, and Chrono Triggers of yore.

Crisbell’s mastery of past, present, and future is demonstrated through Cris Tales’ main story arc, a litany of side-quests, and even the game’s combat. The player can reach into both What Once Was and What Shall Be in order to gather items, open pathways, witness events, and gain the upper hand in battle. Of course, while Crisbell’s decisions in the heat of the moment may change the present in her favor, it could lead to a less shining future for others. This is the moral quandary lying at the heart of Cris Tales’ wholesome and engaging story, a story that successfully hooked me thanks to its cute, emotive, even pantomime approach to a tale as old as time itself: Underdog Good vs. Domineering Evil.

While commendable in concept, Cris Tales’ ambitious gameplay design does not quite find its feet. Cris Tales features some inventive and impressive ideas — such as a smart screen layout that displays the current location in three separate time zones simultaneously — but the overall time manipulation concept is ultimately under-utilized and occasionally even unnecessary, particularly in regards to the many throwdowns our heroes will face on their hazardous quest.

Combat consists of typical turn-based warfare, with characters equipped with various attacks, spells, and offensive, defensive, and support abilities. There is little here that will surprise any tried-and-tested RPG fan, with recognizable effects, items, and gear buffs all coming into play. Cris Tales tries hard to weave its time manipulation themes into the core battle mechanics, (for example, soaking armor in the past in order to rust/weaken it in the present), but solid elemental strategy and decent load-outs often eliminate any need chrono-tactics whatsoever. For the most part, combat is relatively basic, even formulaic, save for Cris Tales‘ somewhat more inventive boss encounters.

Crisbell’s time-tweaking ability is only slightly better utilized in world exploration, with much of the game’s use of reality manipulation remains smarter in theory than in execution. One can easily see how, with a little more experimentation, (and, likely, budget), Cris Tales could have delivered intrinsic “sliding doors” gameplay similar to classics such as Konami’s Shadow of Memories — it certainly offers the same sense of satisfaction whenever one of Cris Tales’ simplistic puzzles is conquered. As a starting point for a new series, Cris Tales use of time travel is mediocre, but it’s easy to imagine that a potential sequel would better implement this core theme into both its combat and adventure scenarios. 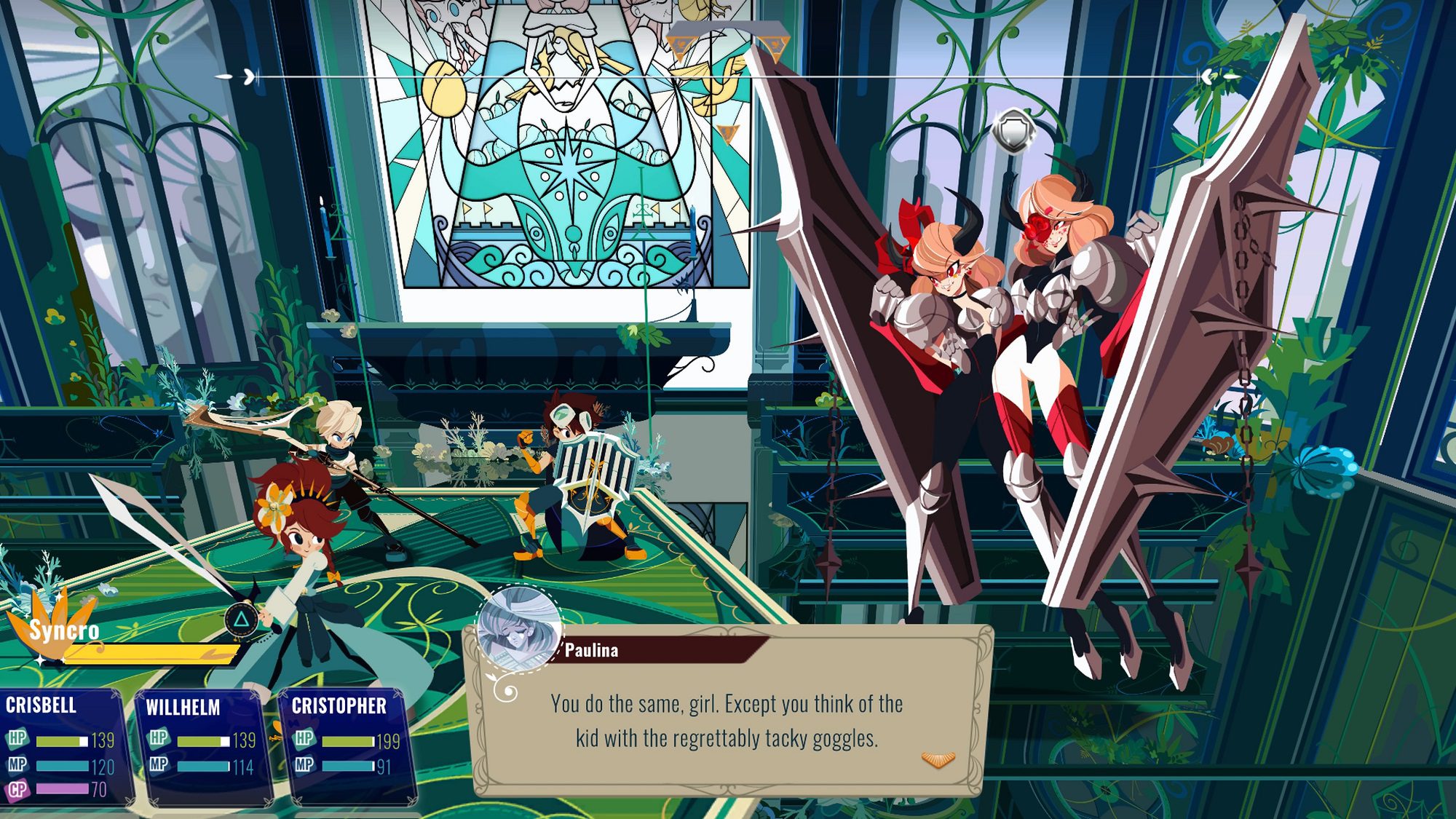 In keeping with its “old-school” adage, Cris Tales features random encounters, a mechanic which might grate those adventure fans raised on more modern RPG releases. (A ring can be purchased to turn off random encounters, but The Fight is required for both character-building and skill-learning). There is also some trying grinding to be done, especially earlier in Crisbell’s quest. The game supports a manual-only save system, and suffers from base-level frustrations such as a lack of labels in its overworld, unclear objective markers, and a tendency to halt player initiative in regards to problem-solving… When Cris Tales calls itself a tribute to the RPGs of the past, it commits to that statement. For better and worse.

The litmus test — for console players — lies in Cris Tales‘ myriad loading screens. While not too lengthy, the screens are very frequent and become frustrating fast. Cris Tales is already a deliberately paced adventure at the best of times, but simple backtracking — perhaps to complete a side-quest or to visit a certain store — becomes an exercise in monotony. These interval screens may be short, but they inarguably grate over the hours. The PC edition features the same amount of interval screens, but with swifter loading times, making the PC port a clear choice over its last-gen console brethren.

Unfortunately, due to the above hurdles, it often isn’t time that the player needs on their side, but patience. 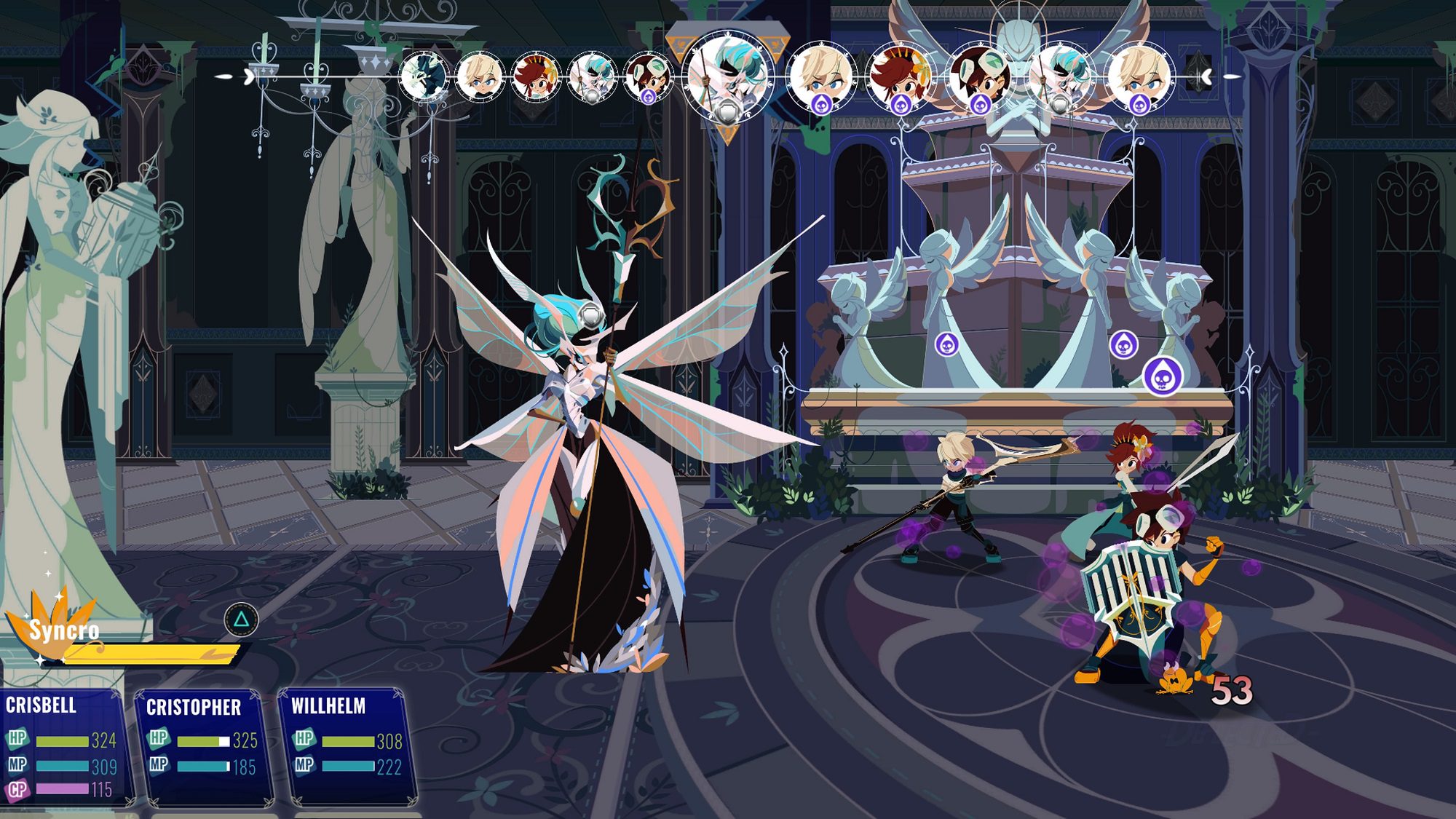 While beauty is, obviously, in the eye of the beholder, I found Cris Tales‘ world and character design to be among the most beautiful I’ve ever experienced. Drawing inspiration from the developers’ Colombian heritage, Cris Tales flourishes with delightful storybook vistas; sharp, nicely hued colors; and some of the most attractive character designs I’ve met in an age. Every location is a dream, and every individual encountered — from the large roster of heroes and villains to an ensemble cast of one-line NPCs — is a joy to behold. This surprisingly huge litany of characters are blessed with quality voice acting, vibrant personalities, and just the right amount of wit, pathos, and vulnerability.

Due to having such an attractive aesthetic, one of the most difficult elements of this review was simply selecting just one or two shots from a gallery of gorgeous screens, such is the sublime universe that Dreams Uncorporated crafted. In its stylistic two-dimensional appearance, Cris Tales carries the allure of a beautiful pop-up book from some forgotten century. Ironically, the occasional appearance of any more modern 3D visual effect tends to harm the overall style — so striking and timeless is its natural form. These dreamlike locales are scored with a sweeping, regal soundtrack, which serves to suitably underline the nostalgic fairytale fantasy of the world and narrative.

When it comes to style points, Cris Tales scores nigh-on full marks. It is simply one of the most pleasing and beautiful game worlds I have had the fortune to experience, populated with a great cast of charming characters. Even the baddies! 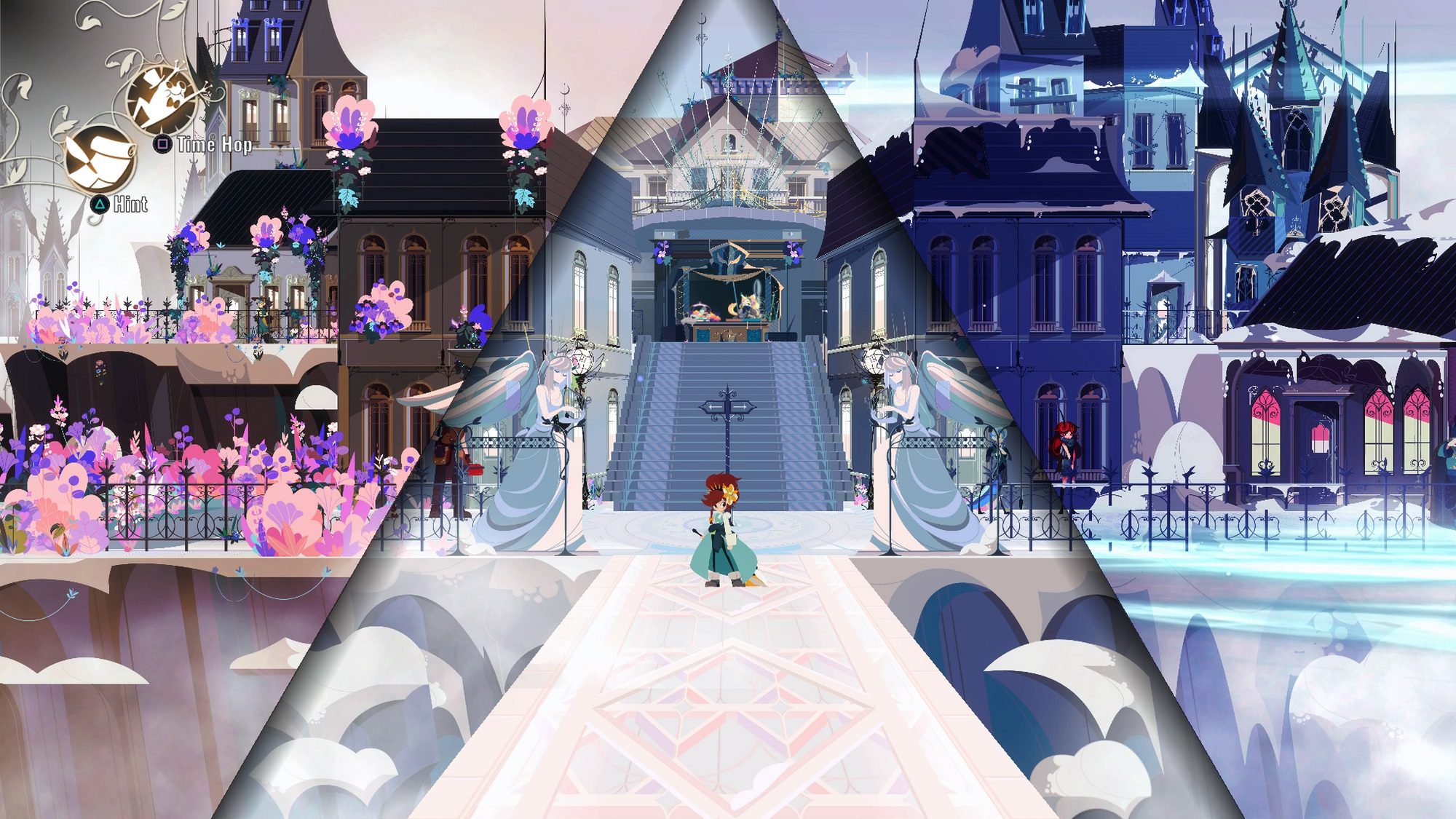 That Cris Tales spins a yarn of the past, present, and future is bitterly ironic. The developers’ love of yesteryear is worn on the adventure’s sleeve, with storytelling, characters, and worlds all recalling the golden era of RPGs. Unfortunately, Cris Tales also suffers from design flaws that the genre has long left behind, while simultaneously not capitalizing on modern mechanics that would present a more streamlined and mechanically satisfying release. As the lovely Crisbell struggles with the conundrum of merging the past and present, Cris Tales creates its own pseudo-paradox — recalling the best features of yesterday’s RPGs but not marrying them with the qualities of tomorrow’s.

Despite this, those with a deep love of fantasy adventure might — like myself — find themselves able to push beyond Cris Tales’ shortcomings to enjoy its core positives. Cris Tales is filled with passion, and pride. While its ambitious concepts are not entirely realized, the studios’  heart shines through in the game’s fun cast, infectious charisma, and undeniable style. If Cris Tales is only Dreams Uncorporated & SYCK’s first video game, then something very special must surely be in the studio’s future, and I can’t wait to see it materialize. More Crisbell and friends, please.

While Cris Tales offers a stirring adventure — packed full of wit and character — numerous mechanical shortcomings frequently put the brakes on its excitable spirit. A victim of unfulfilled ambition, Cris Tales doesn’t quite deliver on its clever premise or its chrono-combat. There’s no denying the passion and talent of the developers, however, manifested in stunning visuals and a wonderful cast. Cris Tales will definitely ostracize some players, but those with a little patience may see past its flaws to embrace its heartfelt homage to gaming’s bygone era.