It wasn’t easy for Alex Kidd. Not by a long shot. Not only did Sega’s earliest console mascot enter a world in which Super Mario Bros., The Legend of Zelda, and Metroid already existed, but also his games were basically… well… not good. The day he was called into Sega’s offices only to find himself replaced by a witticism-spoutin’, chili-dog lovin’ blue rodent must have been a hard one.

Alex did his best, after all. Was it his fault that Hi-Tech World was garbage? Or that the localized artwork to Enchanted Castle made the game basically unsellable? Hell, the west hadn’t even gotten to check out his rad skills in BMX Trials. What did he have to show for all his hard work? Everybody misremembering him as “Alex the Kid.” That’s what. And now he was being replaced, by Poochie-before-Poochie.

Well, Alex, it’s been three decades since then. Three decades of grumbling into your diet of hamburgers and onigiri while taking schadenfreude at that rodent’s many terrible games. But today, in 2021 of all years, it is finally your moment. At the hands of a small team of superfans, kitted out with love, a Unity license, and the blessings of the same publisher that once cast you aside, it is time for you to make your grand return, in the game for which you will always be best associated: Alex the Kid in Miracle World. 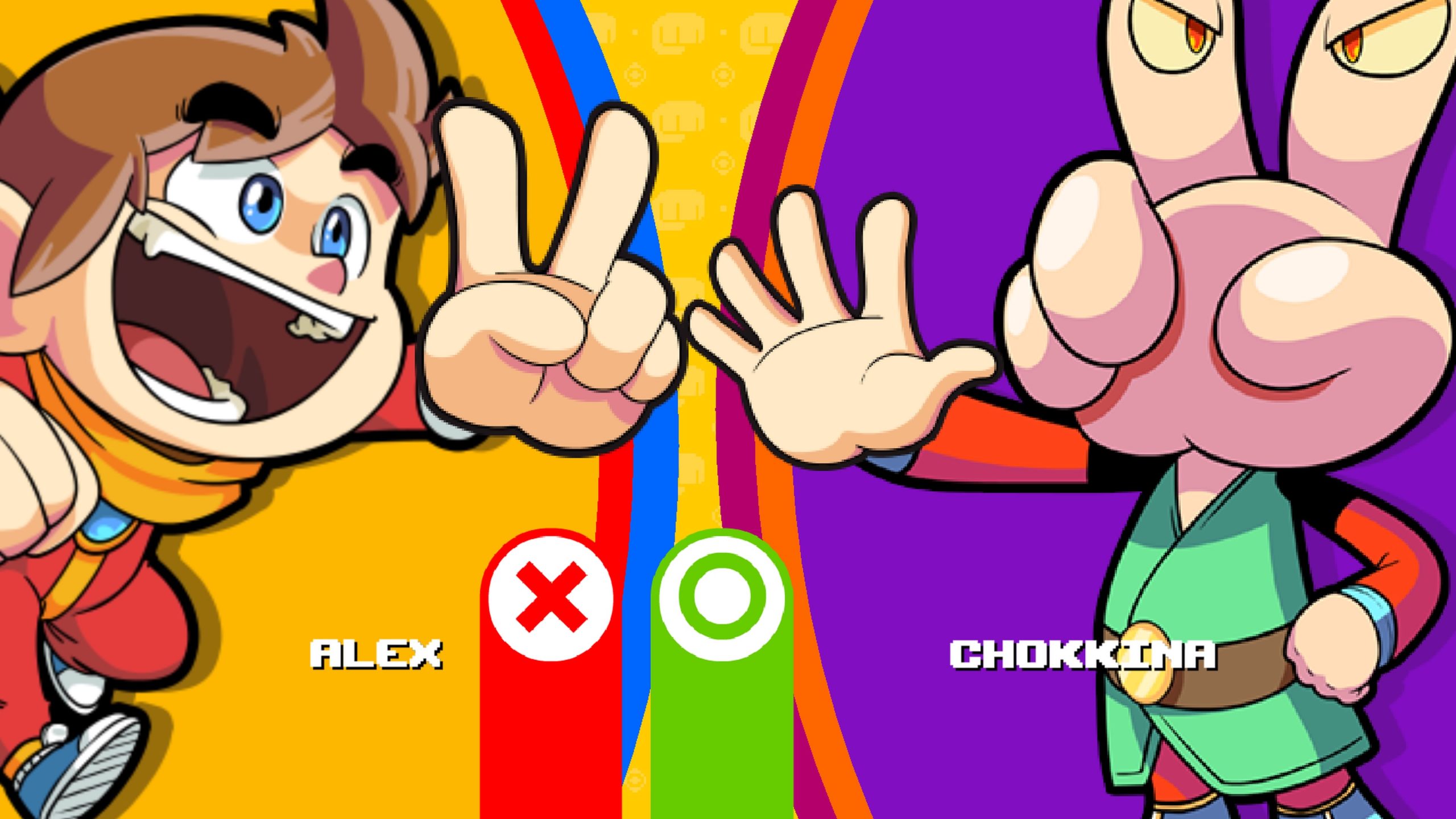 Alex Kidd in Miracle World DX is a remake of the Sega Master System release classic as envisioned by Spanish studio Jankenteam, overseen by indie publisher Merge Games. That’s a mighty legacy — Sega‘s legacy, no less — to fall into the hands of an independent developer. Jankenteam essentially had to rebuild the game via replication and emulation, not having access to the original game’s design documents or source code. As such, it would require the developer to be truly passionate about the original release — to know it inside and out. And from the opening seconds of Alex Kidd in Miracle World DX, it becomes immediately clear that there was no better team for the job.

Miracle World DX is a beautiful game, oozing character, charisma, and charm. Jankenteam has given life, depth, and personality to the original game’s humble 8-bit visuals, populating the fantastical world of Alex Kidd with attractive pixel artwork, detailed backgrounds, immersive weather effects, and smooth animation. Popping off of the screen with a palette of rich color, Miracle World DX is at once wholly recognizable and immediately loveable. While one is reminded of the excellent work done by Dotemu for Wonder Boy: The Dragon’s Trap, Miracle World DX has achieved similar success in remastering with fewer tools, a smaller budget, and a smaller team, making up for the lack of resources with pure and unashamed passion for the original title.

And Miracle World DX sounds as good as it looks. The classic, ultra-repetitive Alex Kidd in Miracle World score has been pumped up in delightful, sunshine fashion — its famous themes re-recorded with beautifully layered Spanish guitar and Southern American-style drum beats. Jankenteam has also added to the OST, creating a relaxing, sun-washed score that sits well against the bright locale of Miracle World, dialing down the charm whenever it’s time to enter one of the kingdom’s gloomy castles. The overall care and attention utilized to bring Miracle World into the modern day is award-worthy. That this brilliant glow-up was created by a minimal team — working in Unity — is nothing short of amazing.

As a direct remake, Alex Kidd in Miracle World DX replicates the 1986 release, warts and all. The fact remains that, while tightly held in retro-gaming circles, Alex Kidd in Miracle World was an oddly designed game — at times badly designed. While the legends of Super Mario Bros.‘ stage and enemy placement — meticulously patterned to pixel perfection — are well renowned, Miracle World suffers from some very poorly conceived platforming sequences, with strange use of asset patterning and head-scratching pathways that occasionally seem unplanned, even random.

Miracle World DX retains each and every one of the original game’s idiosyncrasies, some of which will seem dated, frustrating, and even confusing to players who do not hold the original Miracle World deep in their hearts. In worst-case scenarios, some players may find themselves gobsmacked by some stage layouts, late-game “puzzles,” and the seemingly random nature of the “Jan Ken Pon” bosses. There’s no doubt Alex Kidd in Miracle World is a cheerful title and a bright and shining memory, but in many ways, it is not a great game. This new release — faithful to a fault — retains the original adventure’s periods of dreary action and odd design.

To help combat the more dated elements, Jankenteam has added a few neat features, including redesigned boss battles, extra stages, smarter-looking splash screens, an improved control system, and a few hidden bonuses. All of these additions are welcome for the most part, but aren’t completely successful in hiding the shortcomings of the core release. If you ever had any issues with the original Miracle World, you’ll find the same frustrations front and center. Conversely, anybody who has continued throwing block-busting fists since the Master System days will find the same joys await them right here — be it swimming in the deep blue, go-karting through the jungle, or fighting a sword-wielding grizzly bear. 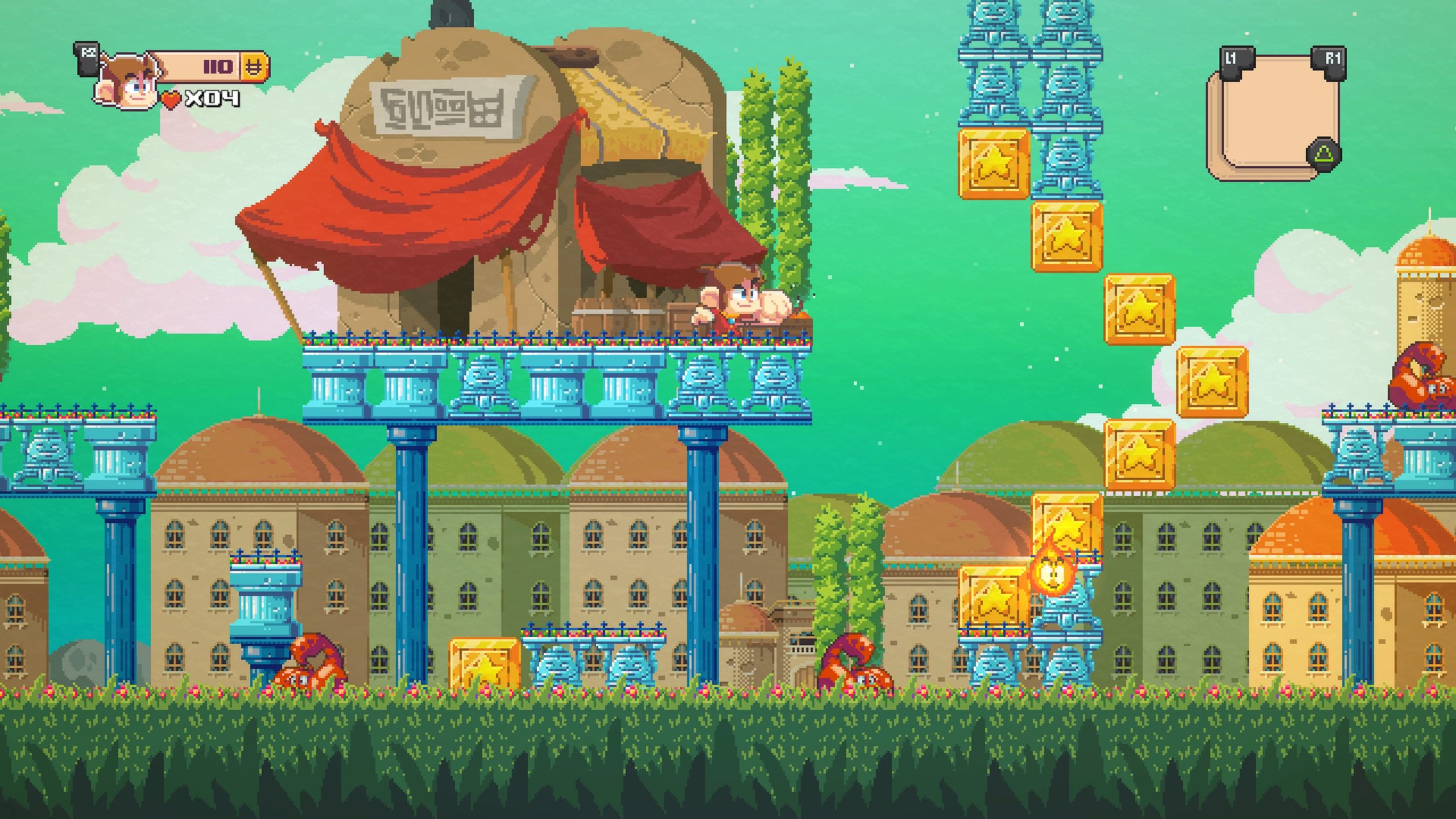 Once the quest is complete, there is little extra on offer. A boss rush mode becomes available, as does the option of playing a full recreation of the Master System original (original score, map, inventory, the works). There is, unfortunately, no gallery option, nor a museum of classic materials. And if Sega didn’t offer Jankenteam a plethora of old merch and marketing goodies for Jankenteam to showcase in its passionate recreation, then that’s a disappointment. Originally a simple, 8-bit title, Miracle World DX only offers short adventure. But, for die-hard fans, this feels like a title that will sit cozily on your dashboard, ready to be revisited and bettered again and again.

Alex Kidd in Miracle World DX is a visually gorgeous upgrade to a very rose-tinted release. While the flaws of the original game remain laid bare, Jankenteam accentuates the positives, reimagining one of console gaming’s earliest universes with stunning artwork, great animation, and a sophisticated score. New players will struggle with dated and baffling design choices, but those who hold tight the carefree afternoons of the Sega Master System will find a delightful trip down memory lane awaits.