Sometimes I imagine the puzzle game masterminds at PopCap as mad scientists, all hunched over a table in a dark underground laboratory, doing something unworldly to their games to make them as addictive as they are. In recent memory, titles Plants vs. Zombies and the various incarnations of Peggle have eaten more productive hours than they should have, and now a follow-up to one of PopCap’s classics is doing the same.

The original Zuma consumed me for a long while, and a version later released on Xbox Live Arcade did it again. Finally, after a bit of a rest, PopCap comes back with a fantastic sequel that adds boss battles, new power-ups and a vastly improved presentation and graphics. Great. There goes my free time again.

Zuma’s Revenge (PC)
Developer: PopCap
Publisher: PopCap
Released: September 15, 2009
MSRP: $19.99
In Zuma’s Revenge, our friendly frog has washed onto an island where tiki gods are out to harm him for no good reason. That’s about all you’ll get as far as a story goes. The focus here is ball-blasting action, and there’s plenty of that to be had.

Zuma’s Revenge, at its core, has the same basic game play as its predecessor. You control a stationary frog that can only spin in place and shoot colored balls into moving rows of other colored balls. Matching three or more of the same colored balls causes them to disappear. Your goal is to eliminate these balls before they travel along their path to the stage end point. You and your frog fail if any ball should reach that endpoint. Your reflexes and short-term memory are put to the test in levels of gradually increasing difficulty. 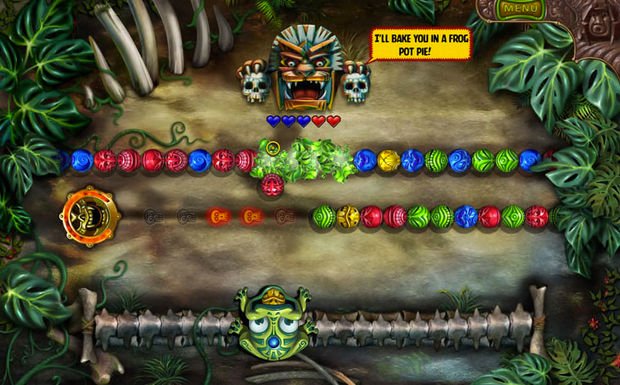 This sequel adds quite a bit of new concepts and play styles to the original formula. One of the most significant changes is the frog’s ability to move around a bit more. For the most part, he’s still spinning in place, but some stages have him sliding back and forth, and others have a few pre-set lily pads for him to move to at his leisure. For these stages, you’ll do less waiting for the proper balls to come around. This is a great thing, as the freedom of movement keeps you in the action.

Several new power-ups have been added to the Zuma formula. Laser eyes let you zap out any offending balls, while lightning lets you select a ball and have all balls of that same color eliminated at once. There’s also a new precision aiming power-up that puts a visual guide between the frog and the balls. Finally, a triple shot power-up lets you take out any balls in your chosen path.

Boss battles are a welcome addition. Zuma frog will travel to different themed sections of this island, blasting his way through various stages until he comes across a boss. Each of these bosses, all types of tiki gods, will present challenges of increasing difficulty. In most of these, the frog will be able to slide left-to-right freely, working to eliminate rows of balls to access the boss behind them. After a few shots to the face, the boss is taken down. Later bosses add other elements and challenges, like blast blocking baddies that have to be taken out first. One boss later in the game can summon swarms of mosquitoes to get in your way. Should you be stung, your reaction time is slowed, making it even harder to take out the boss. These bosses help break up the puzzle game play with more of an action element. Oh, and they all have something funny to say when you finally take them down. 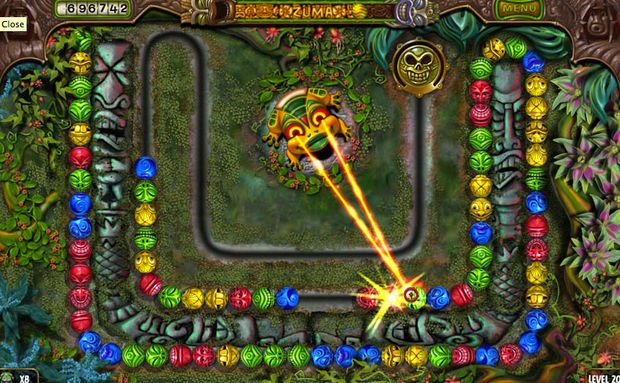 In the main mode, Adventure mode, there are 60 levels in six stages. Should you manage to get through that, you can take on other modes with ramped-up challenges. Another mode, Challenge mode, hits you with fast-paced level-based challenges. Finally, an Iron Frog mode presents levels that leave no room for error. It’s a ball buster, if you will.

Zuma’s Revenge has also seen upgrades in the presentation department. The stages are now vibrant and visually varied, and some new visual effects add polish. The new stages look great, and there’s even an underwater stage in the mix. While its predecessor looked fine, it’s visually bland in comparison to Revenge. Thanks to higher resolution modes, the game looked nice in 1920 by 1080. As far as sound effects go, things are mostly unchanged. Thankfully, though, they’ve added new music, which changes according to what section of the island you’re on. Zuma‘s music was great, but there was little in the way of variation. 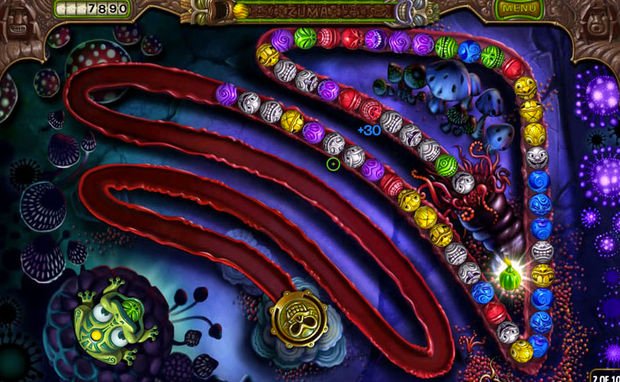 With Zuma, what begins as something simple gradually becomes deeper, as you start to see patterns and strategies spinning in your head. Zuma’s Revenge adds to that new power-ups, stages, movements and even boss battles. Puzzle fans, expect to be engrossed. One of the best and most addictive puzzle games ever has now become even better and even more addicting.