Zoomaroom generated a decent amount of critical buzz when it was released for Xbox LIVE Community Games. Since then, we’ve learned what to expect from the platform and perhaps raised our collective expectations. I fully believe skilled developers can create feature-rich, quality titles on the downloadable platform.

Zoomaroom sounds great on paper: it’s a platformer with light puzzle elements. It also allows players to create their own levels and upload them via Xbox LIVE.

So, does the title rock? Hit the break for the review. 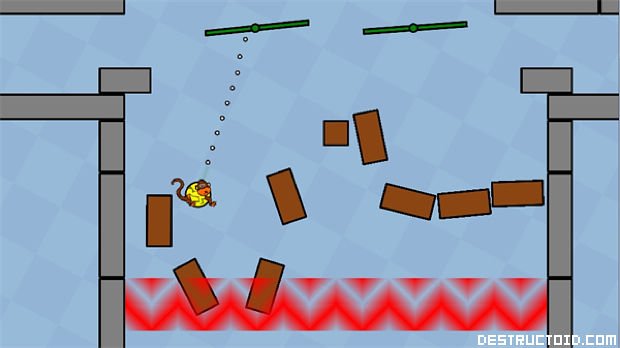 I began playing Xbox LIVE Community Game Zoomaroom before I abandoned my Xbox 360 and apartment for Los Angeles, California, to attend E3 2009. I didn’t miss the game during the week I spent at the busy convention center. In fact, I was relieved I didn’t have to mess with it — there are some games I don’t miss.

After returning home to my lovely ladies — my cats, those little darlings — and my gaming machine, I grimaced and hoisted the controller once again. The bad impression stuck with me throughout the rest of my play for a good reason: it is indeed the clunky title I thought it was before E3.

Zoomaroom — it’s killing me to smash those words together — is a physics-based platformer with a dash of puzzler. In the game you control a, uh, monkey with a sphere for a chest. The monkey doesn’t move traditionally. Instead, he rolls on his magical sphere, which I suppose contains a heart, rib cage, colon and so forth.

As this magical monkey ball, it’s always your goal to reach endpoints clearly designated by doors. The problem is, of course, reaching these end points: enter the platformer and puzzler elements. 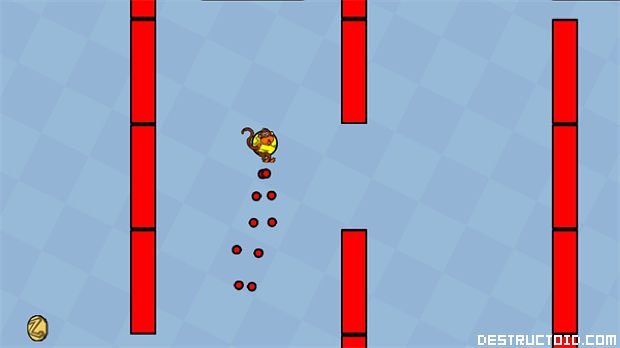 The more the monkey rolls, the more steam he gathers, which allows him to jump higher and traverse the game’s innumerable basic stumbling blocks — ramps and the like. But the game doesn’t stick to a Mario Bros. mold. Several physics-based obstacles will impede the monkey’s journey: obstacles like boards balanced precipitously on triangular foundations, teleports that push the monkey in one direction hastily, and traditional falling beams that collapse under pressure.

And that’s just a short list of stuff in your way.

The game’s driving force is momentum, something I take issue with. The controls are floaty: I’ve missed hundreds of jumps, collided with countless enemies, and have vastly overshot goals.

The physics-based objects — especially the boards — are also a hassle. Unlike the monkey, the objects in the game have some weight. The problem lies within their erratic behavior: a board will move one way one time, and the next time, it’ll move differently. In the mini-roller coaster levels, the manic behavior drove me nuts. Riding a board down a steep slope and losing because it randomly flips is a bummer. 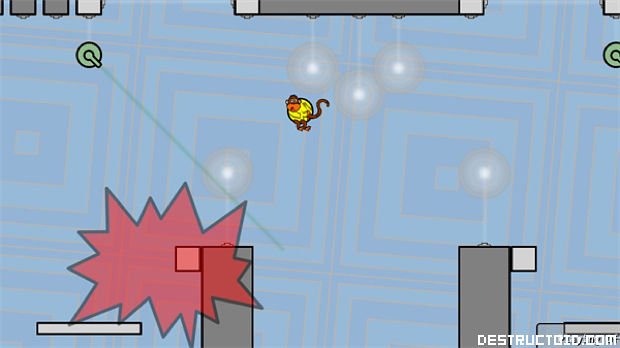 If you can stomach bad controls, the game has plenty to offer for a Community Game. It has a robust item system: grappling hooks, flamethrowers, jet packs, rockets and bombs are all available to solve the game’s numerous, yet simple puzzles.

The level design is superb. Each level — and there’s a ton of them — is unique. Some emphasize the puzzle solving, others momentum (falling, jumping) and still others good old platforming of the maze variety. I rarely did the same thing twice.

The game certainly has charm: the bright visuals and playful arenas are cute and worthy of a look if you’re not down with brown and tired of Locusts.

Zoomaroom is definitely worth a trial. Just be careful with your money. The bad stuff in the game (the floaty controls, erratic behavior of objects and obstacles) ultimately outweighs the good (the character, the creation options, and puzzle element).