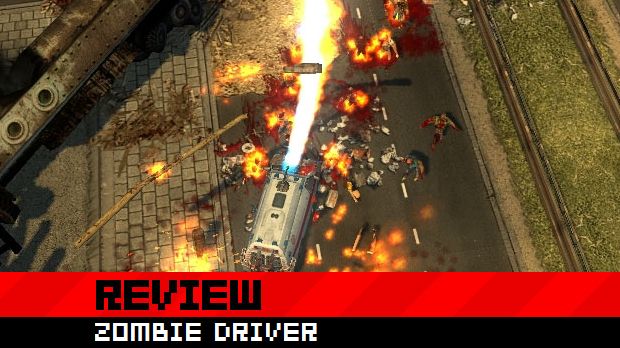 This is a review for a game called Zombie Driver.

The game is about running zombies over in a car and killing them with weapons attached to said car.

The review will tell you, in my opinion, whether or not the act of running over and killing zombies with a car is an entertaining as it should be.

If you need to know more than that in order to hit the jump and read the review, you obviously did not notice that the name of the game is Zombie Driver.

Okay, first things first: is the actual act of running over, blowing up, burning, and vaporizing zombies enjoyable in Zombie Driver? Yes, yes, and yes.

Zombie Driver belongs to the as-yet-unnamed genre that also counts Borderlands, Serious Sam, and SMASH TV amongst its ranks — games which provide simple, unpretentious fun and gore without attempting to muck things up with an obtrusive story or effect any emotions other than empowerment and satisfaction.

(I’m thinking about calling them porno-games since they please the unsophisticated, reptillian parts of our brains in roughly the same way that penises entering vaginas do. But that’s nowhere near as exciting as what the label “porno-games” initially implies.)

You’ll face hundreds of zombies at a time, and the act of dispatching them is exactly as satisfying as it oughtta be. Body parts fly every which-a-way, blood streaks across the ground from the point of impact, and so on and so forth. The actual act of running into zombies slows your car down a bit and opens you up to attack, thus instigating constant, small arguments between the logical part of your brain that wants to survive and the part that just likes watchin’ zombies die real good.

Not to mention that since you car only takes damage from zombies, you don’t have to worry about being a particularly good driver; hit a wall going 80mph and you’ll have just as much health after your car slams to a halt as you did before. The game makes it abundantly clear that you are to worry about two things, and two things only: killing zombies and getting upgrades. And rescuing survivors, but that’s really only so you can get upgrades.

Satisfying as the ghoul-killin’ is, however, Zombie Driver is held back by its fair share of flaws, primary amongst them the camera’s ability to induce nausea after a relatively short period of time. The birds-eye-view camera is simply too close to your car, and it shifts around so often during turns that you’re never given any sort of focal point. The game is only about two hours long, but I could only play for about twenty minutes at a time due to eye strain.

Speaking of length: while Zombie Driver does a pretty good job of ending before it gets too boring (though the final cut scene can be pretty anger-inducing depending on how much you loathe the undead), in hindsight I can’t help but feel as if I was basically doing the same stuff over and over again. I saved some survivors, killed a few zombies, upgraded my car, and eventually escaped the city — there were very few moments that really stood out as being spectacular, nothing that really forced me to change up my strategies. Once I’d crushed my first zombie, I felt a desire to keep playing purely out of a desire to continue upgrading my loadout and see what else the game had in store, but the game really never showed me anything new after the first few levels. 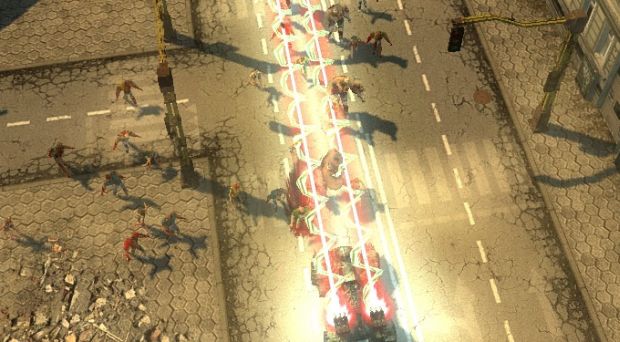 Still, most of this only occurred to me in hindsight, in much the same way that one only regrets eating half a bag of Cheetos after putting the bag away and finally washing the orange dust off one’s hands. In the moment, things felt perfectly satisfying, if not mindblowing; afterward, I felt like I spoiled my dinner.

I’m not really sure where that metaphor was going.