If you’re over the whole “zombies in videogames” streak the industry has been on the past few years, you’re not alone. What once was a rare and genuinely exciting occurrence (Zombies Ate My Neighbors!, for instance), has now become commonplace with varying degrees of success. Dead Rising to a full-on zombie mode in Call of Duty: World at War. From Left 4 Dead to Little Red Riding Hood’s Zombie BBQ (yes, that’s a game).

The market, as it seems, may be oversaturated with the wails and groans of the undead. Shouldn’t we get back to that whole bald space marine thing? I mean, that was working out pretty well.

So I get it. I understand where you might be coming from. But here’s the thing – I’m not over it yet. As fan of horror films, if there’s a game with zombies in it, you’ve got my attention. So despite the flood of titles to hit the market, I’ve had my eye on Nihilistic Software’s digital download undead slaughterfest, Zombie Apocalypse, for awhile. Before it was even officially announced, in fact.

The zombie apocalypse is finally here, hitting PlayStation Network and Xbox LIVE Arcade this week. But is it any good, or should be cut off its head and burn the remains on arrival? Hit the jump to find out. 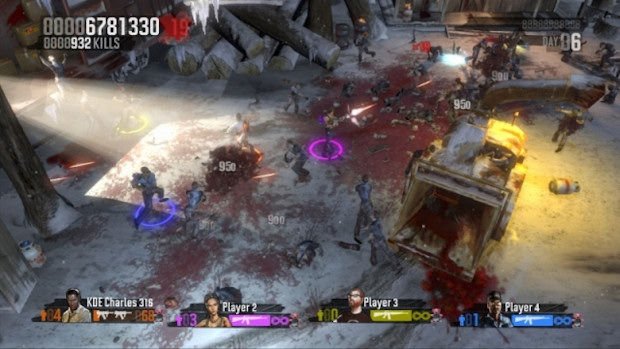 Zombie Apocalypse (PlayStation 3 [Reviewed], Xbox 360)
Developer: Nihilistic Softare
Publisher: Konami Digital Entertainment
Released: September 23, 2009 (Xbox LIVE Arcade), September 24 (PlayStation Network)
MSRP: $9.99/800 MS Points
The premise is simple and familiar — for whatever reason, a zombie outbreak has occurred, leaving the earth in shambles. As one of four survivors all of which have their own look and personally, but are functionally identical players team up with their friends to shoot, blow up, and chainsaw various zombies. Outside of that, there is no narrative when playing with friends or alone. As the name of the game implies, there is a zombie apocalypse and that’s that.

Your objective is to survive as long as possible, with as high a score as possible across 55 nights (or stages) set across seven repeating environments, like a graveyard or a junkyard. While you will see the sames environments quite a few times over the 55 nights, the game switches things up by throwing out different zombies types or imposing things like blackout scenarios that limit the field of vision.

The primary goal is to help the fighting survivors live to see their 55th night of the zombie apocalypse, but as a player, your goal is to rack up as much points as possible. As with most games of this ilk, much of your score is directly tied to a multiplier (which is shared among all players in multiplayer games). For every five zombies killed, the multiplier increases; killing an enemy with a single button chainsaw execution adds three to your multiplier, but leaves you open to zombie attacks. Your score can also be bolster by protecting a uninfected survivor long enough that a helicopter picks her up; failing to do so will result in her undeath, and your having to deal with another type of vicious infected. 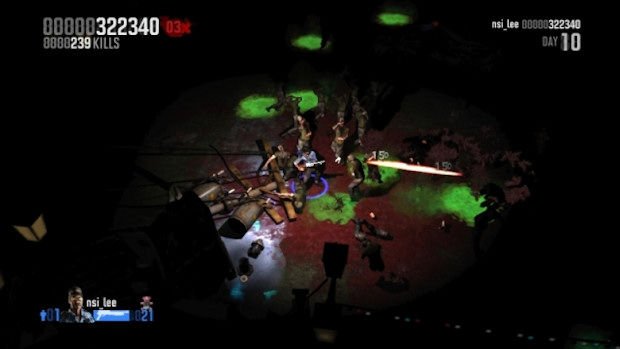 Dying, as you would expect, resets the multiplier. Sure, the game throws unlimited continues at you, but by using them you forfeit your leaderboard score, which is what is likely to keep most competitive gamers playing.

There are a few ways you can kill zombies in Zombie Apocalypse, the most obvious of which are your handguns which have (fortunately for you) unlimited ammo. At various points in the game, different types of guns will drop onto the playing field (Uzis, a flame thrower, a rocket launcher, etc.) which can help you out of some tight spots if you know how to handle them. Infected can also be knocked into environmental hazards (a wood chipper, for instance) or you can use your chainsaw to execute zombies, or in a standard mode that can help you clear a path to freedom.

With no narrative to speak of, Zombie Apocalypse also has no boss battles. (Note: As Nihilistic’s Marc Cooke points out, the game does feature a “boss” at what is roughly the game’s midway point. Not sure how I missed that when making my review notes.) Each of the 55 nights simply ends when you’ve cleared it of the attacking zombie horde. The different zombie types, however, do help to mix things up a bit. The standard “shambler” is slow, but can latch onto you if they get close enough, forcing you to waggle your joystick to shake them off. (In the PlayStation 3 version of the title, you can also vigorously shake the controller for the same effect.) Beyond the expected, you’ll also have to deal with other types like the shotgun wielding “sheriff” zombies or the pregnant beauty queen and her flying spawn that burst from her chest. 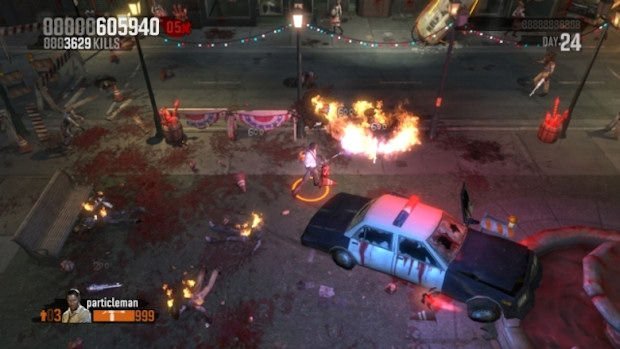 Despite the variety in zombies, by the time you hit your 25th night, you’ve pretty much seen them all. The repetition can make the game feel monotonous at times, but don’t mistake that to mean the game gets easy or you can just lay back and zone out. On the contrary, some of the stages become flooded with undead, the combination of different zombies making it even more difficult to survive the horde.

For a digital download, the game looks decent, with all of the gore and grit you’d expect from a game called Zombie Apocalypse. The sound, on the other hand, is bit all over the place is that it doesn’t always match up how you’d expect. For example, the game’s simple and eerie soundtrack sets the tone for a serious, truly frightening zombie endgame scenario. But on the other hand, the survivors make silly, off-beat quips when a stage is complete. When throwing out a teddy bear bomb (a stuffed animal equipped as a bomb that attracts zombies like moths to a light), a silly voice emits from the item, taunting the zombies. Nihilistic, it seems, couldn’t commit to whether or not it wanted the game’s tone to be serious or silly. The end result is a bit jarring, to say the least.

With Zombie Apocalyse, it’s clear that Nihilistic set out to make a no-frills, dual-stick arcade shooter in the vein of Smash TV or Robotron. In that respect, Zombie Apocalypse is a success, as it’s nothing more and nothing less. Pregnant zombie homecoming queens that give birth to attacking hell fleas notwithstanding, Zombie Apocalypse doesn’t bring anything particular new to the table. And that’s the game’s biggest flaw, because otherwise, it’s solid score-driven arcade shooter that borrows liberally from the games that came before it… but it adds zombies to the mix. 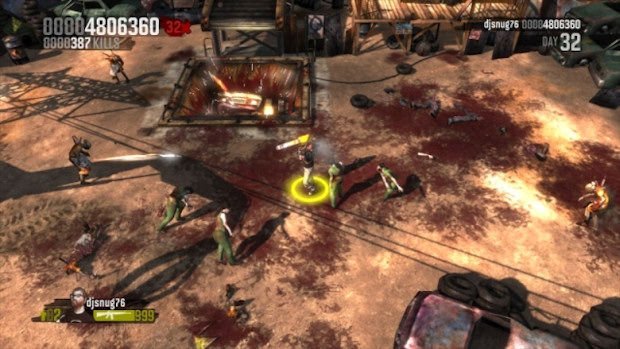 It’s a plus the game can be played with four players online or locally, for the optimal screaming at the television over a couple of beers situation. At a relatively low price of around $10, those who get their kicks out of zombie massacres will find that Zombie Apocalypse is a good time. But for those over the whole “zombie thing” it’s unlikely Zombie Apocalypse will change your mind, despite Nihilistic’s solid arcade framework.