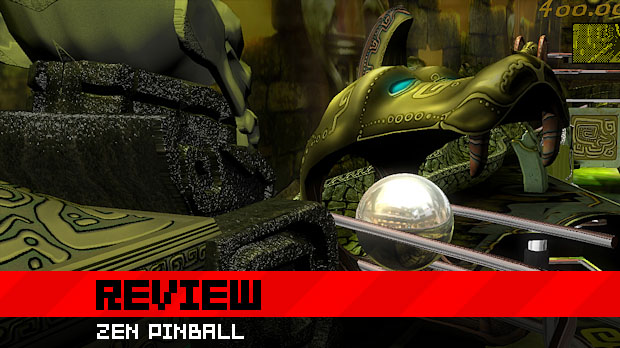 Pinball is a game where a little metal ball is made to hit things on a slanted table and kept from falling into a hole by tiny paddles that the player controllers with two buttons. Points are acquired when the ball hits objects, and the longer the ball is kept in play, the more points are accrued. Pinball machines are often very colorful devices, and sometimes they are themed around Star Trek.

Zen Pinball is a PSN title that simulates a real-life pinball machine on your PlayStation 3! How is this possible? We can only dream of harnessing the kind of technology, or perhaps magic, that has been used to create Zen Pinball. We cannot understand it, we can only review it.

Read on as we review Zen Pinball! 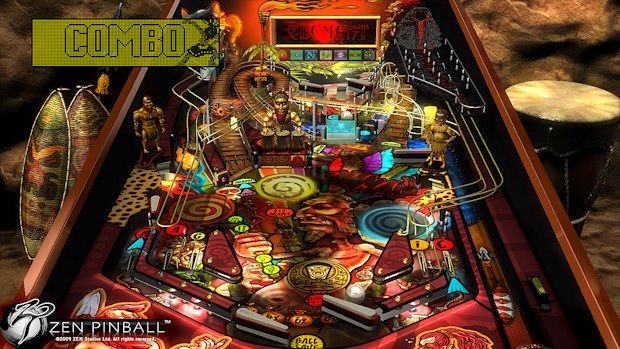 I don’t really want to seriously explain the main mechanics of Zen Pinball. If you don’t know how a pinball game plays by now, you really need to leave your house once in a while. Zen Pinball is what you’d expect in that regard — it’s a pinball game. The ball still bounces around on things, the paddles still keep it up, and you still lose when the ball goes through the hole. With that refresher course out of the way, let’s get to what Zen Pinball can offer the average pinball fan.

Zen Pinball offers four tables with their own very distinct themes, music, and objectives. Shaman is a table that takes its inspiration from tribal Africa, with players hitting objects to summon whirlwinds and cast spells. Tesla is a Russian table with a steam cannon and other experimental objectives. Eldorado has a distinct Indiana Jones vibe to it and V12 is just a very annoying table themed around the idea of race cars. 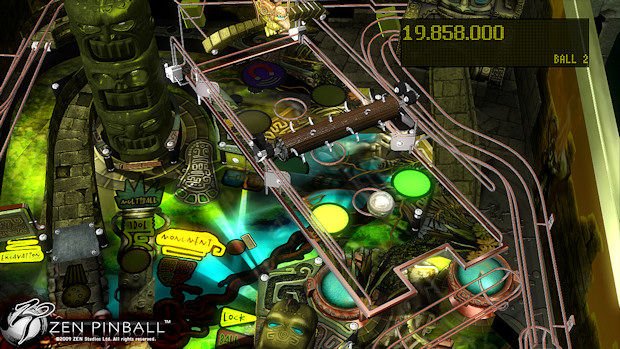 With only four tables, all of which can be accessed from the very beginning, Zen Pinball feels a little light on variety. The tables also have a tendency to fail you on bullshit reasons as opposed to any real skill issues, with two very large gutters either side of the paddles that the ball seems magnetized to. Nothing’s more irritating than a gutterball in a Pinball game, but Zen Pinball exploits it a lot.

Still, the tables are very well designed in terms of how they look and what you can activate on them. Each stage has its own distinct voiceover that shouts enthusiastically whenever you do something, and the music is quite catchy as well. Graphically, it’s a sweet little title that captures the recognizable Pinball “look.”

On the subject of aesthetics, the game is to be commended for integrating a sense of community into the experience. While on menu screens, a news ticker is always running, telling you about “celebrity moments” where players have topped scoreboards, and informing you on the latest progress of players on your friend list. It’s by no means essential or mindblowing, but these kind of things are always more interesting than a standard leaderboard. There is a standard leaderboard though, just in case. 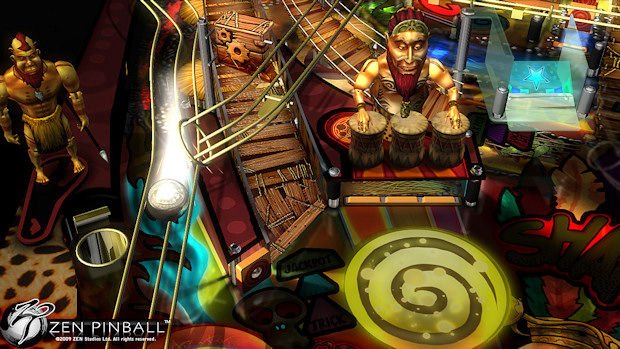 The title also features multiplayer, albeit in a limited capacity. It’s essentially a race to a designated number of points, with each player getting their own pinball table which only they see. It’s not an interactive experience at all, although those with a PlayStation Eye can broadcast their faces to others. I saw someone doing this. Watching another man’s face while he plays pinball isn’t very enthralling.

Zen Pinball is a decent little game that anybody should be able to eke some enjoyment from for a while. However, the lack of tables and the somewhat unimaginative online mode do little to make one come back for more. It’s a fun enough title, but it lacks the addictive quality of other Pinball games and shouldn’t really last the average player more than fifteen minutes before it gets a bit dreary.

Certainly worth a play, but only a true Pinball fan will want to slap down the cash.

Score: 6.5 — (6s may be slightly above average or simply inoffensive. Fans of the genre should enjoy them a bit, but a fair few will be left unfulfilled.)