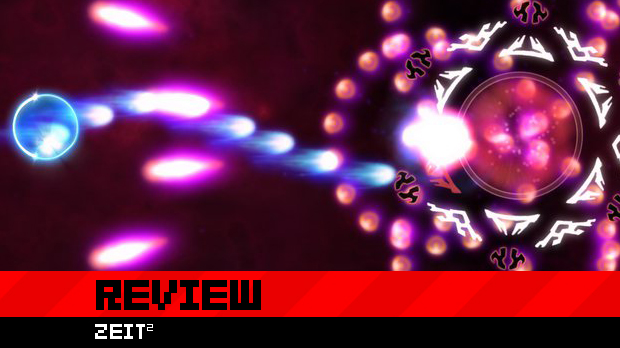 One of the great things about services like the PlayStation Network and Xbox Live Arcade are their abilities to expose indie titles that otherwise would’ve never seen. Limbo, Braid, and Everyday Shooter are just a few examples of games that have had an opportunity to shine on these platforms.

Zeit² is about as indie as you can get. Developed by a group of college friends for a class project, the title began garnering some attention after their teacher (Osmos developer Andy Nealen) encouraged them to show it off. After bringing it to events like the Independent Games Festival it began winning awards, and getting all the right kinds of attention. Eventually Ubisoft became interested enough to offer the team a spot on Xbox Live. All they would have to do is deliver. 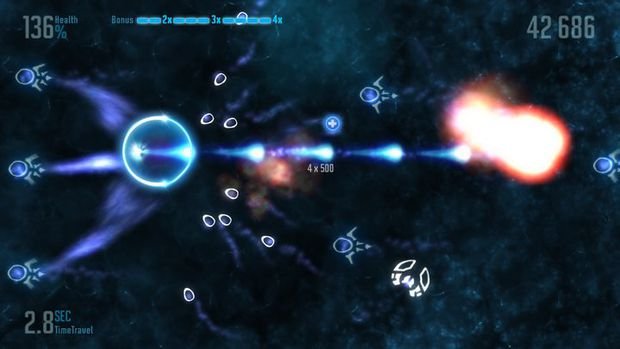 Well deliver they have.  January 12th, 2011 marked the launch of Zeit² across the Xbox Live and PC platforms meaning we finally have the opportunity to peel back the layers of this time bending shooter.  The layers aren’t immediately apparent, but once you’ve had time to acclimate yourself to the time mechanic you’ll discover a rich set of options that only build upon each other as you progress.

Zeit² forces you to layer your tactics when taking on opponents.  Firing causes you to lose life, letting enemies pass causes you to lose life and ships will enter at the top and bottom of the screen forcing you to start thinking outside of the box.  So enters the time mechanic.  The time mechanic in question allows you to rewind time for a few seconds, leaving a shadow image of your past self to attack.  While that image attacks, you can either shoot its shadow for an areawide attack that lasts a few moments, or cover the portion of the screen that your past self couldn’t reach. Include enemies that can only be defeated while your past self is on the screen and enemies that can only be defeated if your past self isn’t on the screen and you’ve got a recipe for some cerebral shooting. 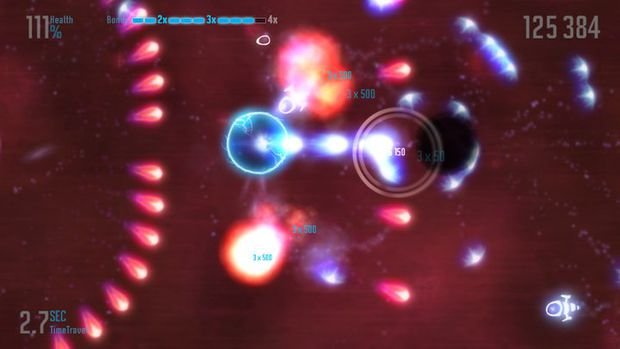 Though I was able to defeat the arcade mode in two hours, access to other modes open up immediately.  This includes some of the most engaging and difficult Bonus Levels I’ve ever played and game types that feel like entirely new experiences. Each of these subsequent layers can only be unlocked by playing at least one level of the previous game type. Wave mode is unlocked after accessing the Arcade, Time Limit mode is unlocked after accessing Wave mode etc. Though you may think that these new game types are standard they’re anything but.  Nothing is as it seems when it comes to Zeit².

Each of the additional modes, Time Limit, Wave, Survival, Tactics, Score Attack, and Challenge take a unique approach. For example, survival will increase how much damage you’ll take as you progress making it harder and harder to survive. Time limit combines survival with collectible score multipliers that boost your score exponentially. Even Score Attack, which seems self-explanatory, gives you four stages to choose from and allows you to pick one power-up before beginning. These slight changes will have any shooter fan salivating as they try out each mode and realize it’s something new, and incredibly engaging. 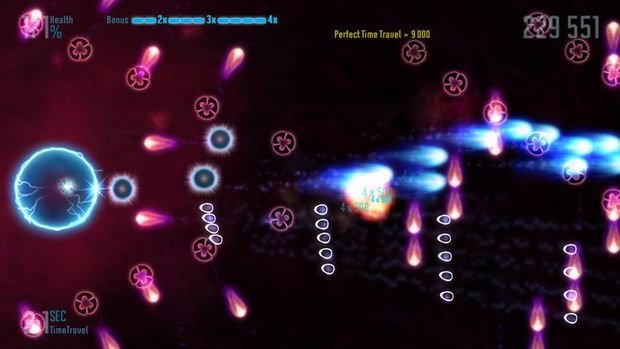 You’re entire experience is set on a star covered background as enemies approach from the right looking like they just jumped out of the PS3’s flOw and into a space shooter.  Opponents range from tiny, white, and squid shaped, to circular, goliath sized bosses. You’ll take them on as you fly through a brushed steel expanse set to some light techno-rock. The music is one area I felt they could have improved on, which sometimes sounds like someones first attempt creating a mix in a music generator.  Luckily for the player it’s not unbearable, easily ignorable, and aside from one track in particular, most of the tracks are perfect tunes for taking out white, squid looking bad guys.

My main qualm with the game is that it was originally set to inverted. Luckily I found out that you can fix it by hitting the jewel, going to settings, profile, game defaults, action, and then setting your y-axis to normal. Had I not found this I would have thought the game was much less enjoyable. It makes me worry that others will not figure out how to adjust the setting, causing the same problems I encountered.  There’s no option in the menus to simply set this to non-inverted and I’ve already seen multiple threads on the internet looking for a fix. This is one of those things that should have been caught before the game launched and will hopefully get fixed with a patch. 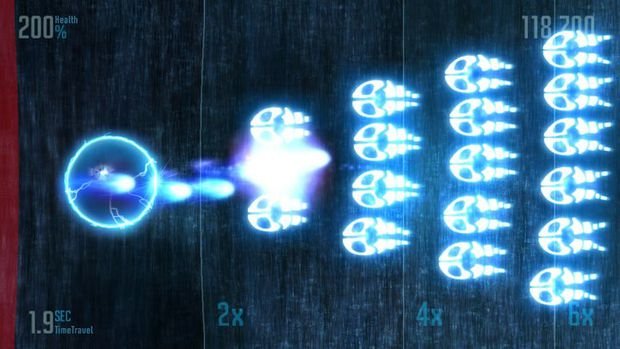 Aside from that complaint you get quite the little package here.  Zeit² succeeds because it takes everything you think you know about a shooter and turns it on it’s head. This isn’t a game where you’re just going to hold down the shoot button and kill everything.  You need to think about your position at all times and how beneficial that position would if you were to use your time travel ability. It’ll change what you think a shooter is supposed to be.

Zeit² is like getting a present inside of a present. At first you’re not sure if you’re going to like it, but once you delve into the game’s time travel mechanic it grabs a hold of you. This seemingly simple stratagem has managed to create a truly unique experience.