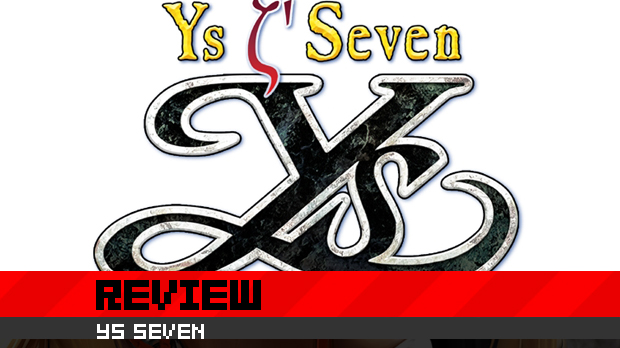 I’m trying to remember the last time I played an action RPG. I…can’t. Maybe that’s why playing through Falcom’s newly released Ys Seven was so refreshing. It’s not amazing or groundbreaking by any measure, but it is lighthearted, polished and fun. When was the last time you said that about any game?

We put the PSP title through its paces, running freely, flipping incessantly, swords a-swinging all the while. If you haven’t picked up your PSP in awhile, this game is a great reason to dust it off and charge its battery.

Read on for our full review of Ys Seven.

Series main man Adol is out on another quest with his buddy Dogi in Ys Seven. The game doesn’t even bother trying to explain why they’re on another quest other than stating that they’re out for treasures again — Ys fans should be used to this by now anyway. What happens next is exactly what you’d expect: They set out to a new land to find fortune, but come across some odd happenings here. And straight from the old RPG playbook, the king of the land asks the famed duo to look into these happenings, and this kicks off a string of events that have the two wrapped up in a new adventure. Yes, it’s a tired story, but Ys Seven is so fun that you won’t care much.

The order of the day here is accessible and enjoyable action role-playing. You’ll run around as any of the three heroes of your party, mashing one button to attack and another to dodge/roll. It’s that simple, really. You’ll come across various monsters as you roam the continent of Altago, and you can choose to either run past or bash them up with your weapon in the game’s simple combo system. Hold down the attack button and you’ll find that your hero is charging up for a harder attack. Hit an enemy enough and you’ll fill a meter that gives you access to use one of four equippable skills, all of which hit harder than your standard attack. On top of all of that, a special skill lets out a massive attack once its separate meter is filled.

The combat is simple, but that’s why you’ll keep coming back. The action is so enjoyable that I never run past enemies, even though it’s perfectly easy to do so. There’s continued satisfaction in busting up baddies and picking up the loot, and it never seemed to get old in the entire 20+ hour quest. Even more enjoyable than the standard battles were the massive boss battles, of which there are several. You and your party are usually confined in a sort of closed arena, stuck with some huge monster that has it out for you. Though the strategy never really changed, it was fun to run in, mash X as fast as I could, and then run back out while the enemy charged at me in revenge. I knew that if I stayed alive and mashed attacks enough I’d have my special attack charged up, and that would allow me to send the boss to his grave with style.

I don’t want to make the game sound too terribly simple. There is a bit of strategy in combat, especially when it comes to what character you choose to fight with. You’re able to hit the Square button at any time to switch freely between your three party members, and this is because you’ll find that some enemies are strong to a particular hero’s weapon choice. For example, Adol carries a sword, and while that may cut up fleshy types of enemies fine, it doesn’t work on hard-shelled monsters. A quick switch to Dogi remedies that. There’s nothing too complex here, but switching between the three characters keeps things fresh. Later on you’ll even get a projectile user.

The game’s progression matches the combat style perfectly, which is to say that the story is simple and fun. There’s a decent story here with a few plot twists, but it’s not going to blow anyone’s mind. There’s several locales to explore and characters to meet, and the dialogue in all of these situations is actually quite good, which helps you stay interested. The game’s progression is quite linear, but you can opt to take on several side missions to gain money and power, and even take on some ridiculously difficult optional bosses.

Ys Seven will impress with its slick presentation, awesome music, and very nice graphics. It only took me about an hour of playing to wonder how nice the game would look on a television. Using component cables from my PSP, I connected it to my 52″ television and surround system and was quite pleased with the output. Ys Seven could even hold its own against some PlayStation 2 games.

Again, don’t expect Ys Seven to blow your mind. It won’t. But you may be surprised at just how pleasing it is to play. I couldn’t put it down after I got started. Usually review assignments take me a bit longer on RPGs, but Ys Seven was just so enjoyable that I blew through it and have started it again on a harder difficultly level.  If you’ve been looking for a fun action RPG romp, Ys Seven will fit the bill nicely.