Despite its status as a “classic” action RPG franchise, with roots dating back to 1987, I personally had never had any experience with the series until hearing about Ys Typing Tutor in 2006.  Nearly five years later, the first two games in the series are seeing another rerelease (a DS remake was released in 2009), this time on the PSP.  Going into this, I fostered no fond childhood memories, and I intended to judge it as a game released for the PSP in 2011.

Otherwise, all I can say before the jump is that I wish I had stuck with just Ys Typing Tutor. 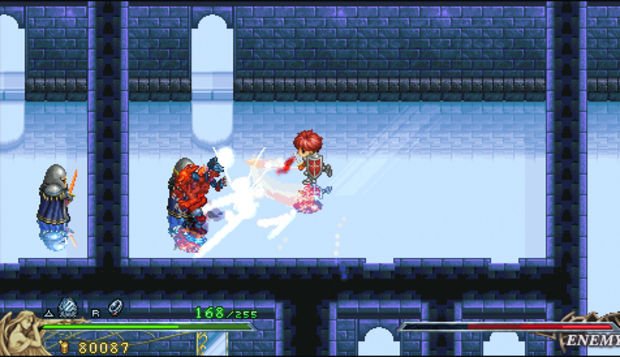 Before discussing the real bummers of Ys I & II Chronicles, perhaps it would be better to start with the slightly higher points.  One thing about Ys that is unusual among long standing JRPG franchises is that the characters and events from previous games actually carry over in one big overarching plot.  This works in Ys‘s favor, as the plot itself is pretty unspectacular; the story follows Adol Christin, a mysterious mute redheaded swordsman who washes up on an island looking for adventure, and eventually ends up saving the world from a great evil power.  It’s about as standard a JRPG tale can be, but the fact that it carries through between the first and second game is refreshing.

One thing that Ys II does better than Ys I is present charming dialogue.  While the first game takes itself very seriously, the second seems a bit more lighthearted, with a few goofy, fourth wall-breaking lines.  Every demon in Ys II has a string of text, and some are enough to bring out a smirk.

For games that were originally released over twenty years ago, the development team did an adequate job with updating the graphics and sound.  The visuals are crisp and detailed, though the art direction is fairly generic.  Admittedly, it is pretty entertaining to watch defeated enemies explode into a pile of gore and armor pieces.  The music, which is lauded as being some of the best in the genre, sounds fine for what it is.  Most tracks didn’t really strike a chord with me, so to speak.  A couple of the songs laden with cheesy electric guitar were a bit jarring and out of place for the fantasy setting, and one in particular (the overworld theme in Ys I) was so obnoxious it had me turning the sound off.  For those interested in the music, it should be noted that the retail version comes packed with a soundtrack CD, while the downloadable version does not. 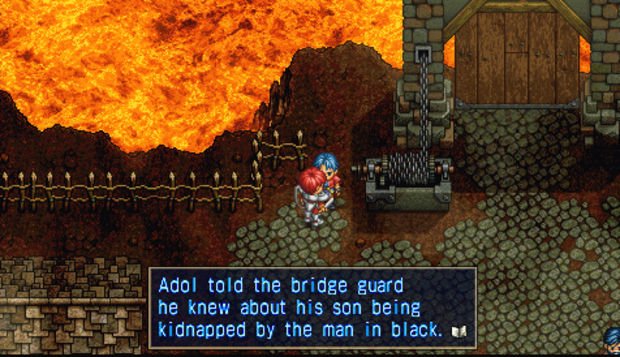 The last strong point that Ys I & II Chronicles has — and some may consider this a slight against it — is that for JRPGs, they are both relatively short.  I finished each game with about ten hours clocked on the timer, although truthfully, it was probably closer to twelve each considering the number of times I died and reloaded from an earlier save.  That said, anybody who enjoys the games enough can find some replay value, as there are multiple difficulty settings and a boss rush time attack mode.

The real negative elements in Ys I & II Chronicles stem from the fact that these are old games with old designs.  Remakes like this can update the cosmetic elements, but little was done to update the way the game plays.

Combat is the first real obvious sticking point.  Rather than having an attack button, Adol will automatically attack demons that he runs into, and depending on his angle of attack, they may or may not retaliate.  It sounds unique, and it saves a lot of time and effort, but it makes for some of the blandest combat I have ever experienced.  It essentially amounts to Adol humping the demons until one of them explodes, except after the first hundred or so it isn’t nearly as cool as it sounds. 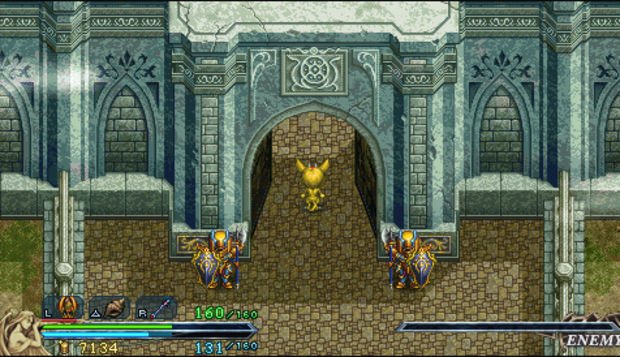 Ys II does improve on the mechanic by giving Adol the power of magic, so instead of mercilessly running into demons all day, he can shoot a fireball at them instead.  Indeed, since the fireball is the only attack magic, it is used to defeat almost every boss in Ys II.  To the game’s credit, the bosses actually change things up enough (some make the game feel more like a bullet hell shmup) to be briefly entertaining, but aside from the boss rush mode, they are few and far between.

The way magic, inventory, and equipment work is also a bit puzzling.  For the most part, Adol can freely change which item to have equipped at any given time.  However, during boss battles, when he needs the ability most, he is locked into whatever setup he had when he entered the room.  Where there could have been some strategy of switching rings mid-battle depending on the circumstances, there is not.  Even more aggravating are the health items.  In Ys I, Adol can’t even use a healing herb during a boss battle (the one time he would need to), and in Ys II, he can’t switch between the different healing items that have various effects.

Another gameplay element that just doesn’t fly today is in the level design.  Although the game worlds aren’t technically big, they are infuriatingly confusing.  Most dungeons are frustratingly convoluted mazes, with pointless dead ends and different sections that are visually indistinguishable from one another.  This problem is compounded by the fact that there is no in-game map to reference.  It seems like it would have been a pretty easy thing to implement, but then, that would probably cut gameplay time down by half, since the player wouldn’t be wasting so much time unnecessarily revisiting areas simply because navigating the world is so cumbersome. 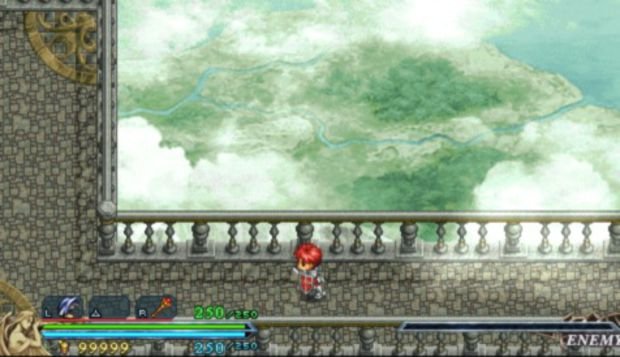 Short as Ys I & II may be for RPGs, they do still feel padded to make them longer.  Like many older games, the player is given very little instruction at times, and must stumble upon the desired solution by using every possible inventory item and exploring every little nook and cranny.  The developers’ need to artificially increase the length is most apparent when climbing the twenty-story final dungeon in Ys I, only to get to the top to find out that the door is locked, and Adol must backtrack down to the tenth floor in order to get the unlocking crystal from an NPC he has already talked to.  Except, of course, the game doesn’t explicitly say that’s what needs to be done, just that the door is locked and that someone somewhere may be able to help.

Also, since Adol can only carry a handful of healing items at a time, most healing is done with relics that automatically regenerate health while standing still.  Regenerating health isn’t a terrible concept on its own, and in fact Ys would be even more frustrating without it, but it happens so slowly and damage can be so severe that it feels like every few minutes in a dungeon, the player has to stop and just stare at nothing for twenty seconds before continuing on.

When it comes down to it, the few infrequent high points where Ys I & II Chronicles does something charming with the dialogue or engaging with the boss fights simply does not make up for the majority of the games being abysmal journeys through uninteresting labyrinths with little direction on what to do or where to go.  The only people I can imagine enjoying this rerelease are either nostalgic fans of the original games, or fans of the newer games who want to learn about Adol’s earlier journeys.  And for both of those cases, they probably already checked out the DS remake that came out two years ago.  Most everybody else will want to steer clear of this.