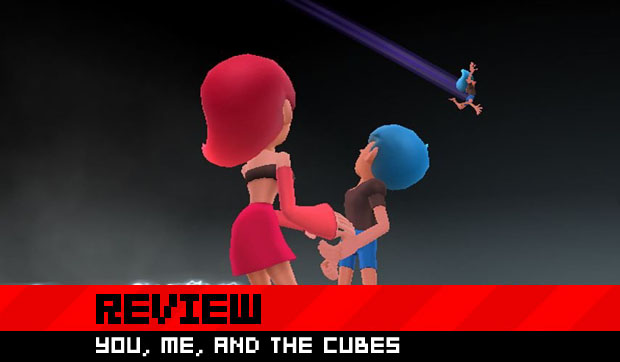 Over the course of my tenure here at Destructoid, I’ve noticed that most people don’t want to read reviews of games they haven’t A) already been thinking about for a number months or B) don’t already own. For these reasons, I’m not expecting  a lot of people to read this review of You, Me and the Cubes. That’s why I’m tempted to just tell you right now if you should buy the game or not.

How about this; do you like art games, or games where little punk-rock teenagers fall to their death? How about the Art Style series, or games about love? If you answered yes to any of those questions, then you should definitely buy You, Me and the Cubes. This may be the best surrealist, co-op, birth-marriage-death simulator ever made (sorry Passage). People who like that sort of thing will like this game, and everybody else will…

You still there? Whoa, that’s weird. OK then, hit the jump for the full review.

A little background info- the concept, design, and music of You, Me and the Cubes are all by Kenji Eno, the creator of the some of the most interesting games on the Dreamcast and Sega Saturn. He’s also a well renowned Sony-hater, is rumored to suffer from mental illness, and hasn’t released a game on a home console in over nine years. You, Me and the Cubes marks Eno’s triumphant return to the gaming scene, and what a weird triumph it is.

The game can be enjoyed on many levels. Some will see it as just a 1 or 2 player puzzle game, others will see it as a creepy take on the afterlife, still others will view it as a opportunity for run-of-the-mill sadism on a big cloudy cube. Personally, I see it as a game about parenting, and how scary and awful that responsibility can be. Regardless of what you make of the game, it is unquestionably unique and well made. It’s not all greatness. There are a few parts of the game that are downright ugly, but for the most part, You, Me and the Cubes is an elegant work of art.

Here’s how the game works. Things start with the formation of a semi-transparent cube, floating in an infinite black space. From there, the player must wank the Wii remote until it throbs (seriously). That’s when you know that you’ve got a kid inside there. Next, you aim the Wii remote where you want to toss a kid, press A button, then fling it. Then your kid (called a “Fallos”) lands on the cube, and from then on, it’s good luck to him or her. The only way to influence their fate is by tossing more Fallos on the cube, which will effect how it tilts. The overall goal is to get a predetermined amount of Fallos on the cube in a set period of time.

The trouble comes in trying to keep them all from falling to their death. Fallos have a mind of their own, and the cube is dangerous place. I guarantee that a lot of Fallos are going to die in your game of You, Me and the Cubes.

If you do manage to keep enough the required amount of Fallos alive for long enough, the cube will turn onto one of its sides. You’d think that would kill your kids for sure, but somehow they stay safe by sitting their asses down. From there they stay stuck to the side of the cube, presumably with very sticky asses. If your Fallos were at all off balance before the cube started turning, forget it; they’re dead. After the rotation of the cube is over, a new cube forms off of the previous cube, and the process begins again. Get enough Fallos to survive to the sixth cube, and all your Fallos transform into doves, who promptly fly themselves the fuck out of this death filled nightmare.

The single player game contains six worlds, each containing six levels. Beat them all and you unlock six more worlds, containing six more levels. Generally speaking, all the worlds contain the same kind of stuff, but there are a few variances. The farther you go into the game, the more types of cubes pop up. There are “cap” cubes (which have numbers dictating how many Fallos they can hold), “freeze” cubes (which cause all the on-screen cubes to freeze in place), “bounce” cubes (which knock Fallos off if you aim poorly), “help” cubes (which, if hit correctly, help all the Fallos on-screen to get their balance), “shock” cubes (that emit a pulsing shock-wave that can knock your Fallos off if they land at the wrong time), “push” cubes (that push Fallos of edges) and so forth.

As befuddling as all these cubes can be, the real devils come in the form of “Pale” Fallos and “Shade” Fallos. The Shade Fallos only show up in the game’s multi-player mode (more on that later) and the Pale Fallos make their appearances in single player. Remember how I mentioned all that Wii remote wanking? Well, sometimes even the hardiest wank results in the shooting of blanks, and these blanks come in the form of Pale Fallos; deformed little weightless ghosts who mischievously torture your “real” Fallos. These creepy pre-abortions can be destroyed by throwing two “live” Fallos on top of them, but only after they’ve attacked one of your “living” Fallos. I guess that they don’t deserve to die until they’ve done something wrong? I don’t know, like I said, this game is pretty weird.

The Shade Fallos are more sinister. They show up after a Fallos has been killed, like black, angry ghosts. Unlike Pale Fallos, Shade Fallos are heavy, and totally screw with the balance of the cube. They stomp around the environment and knock your Fallos off balance at a rapid, intimidating pace. The only way to kill them is for you and the person you’re playing with to shake your Wii remotes, point them at the Shade Fallos, then throw your living Fallos at the exact same time. Throw just a second before or a second after Player 2, and you get nothing.

That right there sums up the theme of the game’s multi-player mode; Two player coordination on all things at all times. Player 1 tosses boy Fallos, Player 2 tosses girl Fallos, and each player can throw whenever they want, but there is no way to succeed by playing the lone wolf. If Player 1 wants to throw a Fallos on an edge, and Player 2 may wants to throw in the middle, the cube will quickly tip and every Fallos will die. So how do you decide who gets to toss where? Well, you’ll have to establish that pretty quickly. Once Fallos are on the cube, they walk around on their own, so you’ll usually have just a few seconds to decide where to throw next before things get crazy. Your Fallos will also be more sure-footed if they’re thrown at the same time, which requires you and your parter to toss together in perfect unison. Man, that sounds sort of icky. Sorry.

Originally, You, Me and the Cubes was meant to be a 2-player only game, and I can see why. Single Player is a lot of fun too, but since the player controls the placement of both the male and female Fallos, the experience feels pretty standard by comparison. 2-player mode is something else entirely. Just imagine playing a 2-player driving game where one player decides when you turn right, and the other decides when you turn left. That’s how severe the need for teamwork can be in You, Me and the Cubes. Everything in 2-player mode, even selecting the difficulty level, must be done together.

The result is a game that changes not only based on the skill level of the players involved, but also their personality and the nature of their relationship with each other. Watch two people play this game and you will quickly see how comfortable they are together, who’s the dominant one in the relationship, and how much they respect each other’s judgment. I’ve only played the game with three people; my significant other, by good friend Andy (editor of many a Dtoid video) and a relative stranger. Me and Andy had the highest level of success, likely because we’ve been collaborating of projects together for almost twenty years. Playing with the stranger was a lot more difficult, but also pretty interesting. I felt like I got to see what kind of person they were without needing to talk about anything biographical. As for playing with my S.O., it felt like marriage, which was generally a good thing, but sometimes a pain in the ass.

This whole “rate your relationship” angle isn’t something I’m just inferring. After a 2-player round is over, the game not only rates both players on how well they did individually, but also on how good their relationship is. Yes, the game measures your relationships in hearts, with five hearts being a perfect relationship, and half a heart being a relationship doomed to fail. Turns out me and Andy should get hitched ASAP.

Damn, ten paragraphs in and I’ve barely touched on the game’s aesthetics. Well, the graphics in You, Me and the Cubes are generally nice, but the Fallos themselves are pretty ugly. Both genders have really screwed up looking hair, and clothes straight out of an 80’s exercise video, but for the most part they are so small on-screen that you’ll barely notice. They also have other charming traits to make up for their bad taste in clothes. When in trouble, they’ll blurt out little word-balloons like “Why me?” and “Ayee!” They also have one of the most pathetic death cries this side of Pikmin. Also on the sound-side are the game’s ambient-but-catchy songs and sound effects, which alternate between calming and menacing, depending on the situation.

You, Me and the Cubes totally succeeds in providing the player with a fun puzzle game and a bizarre relationship simulator in one package. Like real relationships, this isn’t a game for people who give up easily, or can’t tolerate tension and frustration. There are a lot of times in the game when you’ll feel like you are struggling for control, and are watching things fall apart despite all your best efforts to put things right. If that doesn’t sound familiar to you, then you’ve either never had a boy/girlfriend, or you’re the best-person-to-date on the planet.

Oh yeah, the score. I really like this game, despite the fact that it can get a little repetitive and the Fallos look sort of ugly. I’ll give it a…