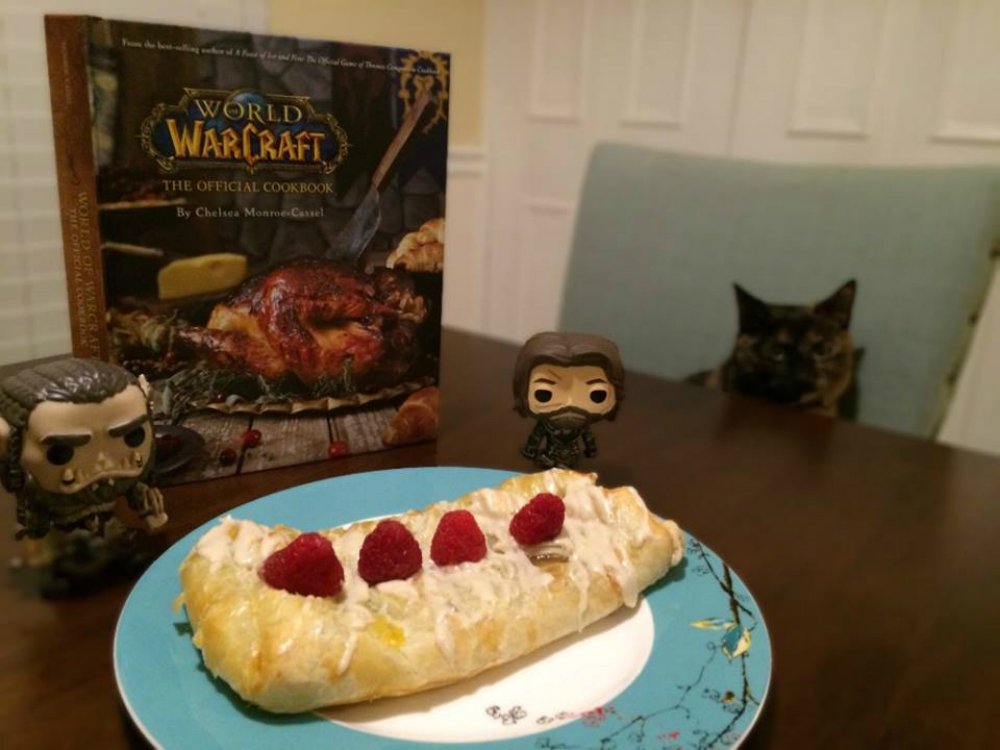 When the opportunity came along to cover the official World of Warcraft cookbook, I jumped at it. While I don’t share this fact much online, my wife and I have been cooking together on a weekly basis for over 10 years, and our German and Italian heritages respectively have meshed to create some really rad culinary delights.

But I also grew up playing the Warcraft RTS games, and as it relates to this particular book, World of Warcraft. So, the onus is on me to judge it by both standards, and I’m pleased to say that it passes.

If you’re completely opposed to turning on a burner or oven in favor of getting takeout or plugging in a microwave, you probably won’t want to dig into half this book. But! You still have hope, as it delineates very clearly between basic tasks, and “expert/master” level dishes. This is an especially useful distinction even for the culinary adept, as it can serve as an extra qualifier beyond prep time (which as most people know, is way longer the first time you whip something up). Serving sizes and pairing suggestions are a welcome addition too.

Half expecting it to mostly focus on main courses, I was astonished to see that there’s so many different categories (spices, sides, breads, soups, mains, desserts, drinks) spread across nearly 200 recipes. If you haven’t made your own cheese yet (it’s easier than you think!), this is a good place to start. The same goes for the easier to craft side dishes such as a soft pretzel with an accompanying cheddar beer dip, and even hard candy or eggnog.

If you consult the gallery, you’ll see two of the dishes that my wife and I created together — the Conjured Mana Strudel and the Herb-Baked Eggs (they were both delicious). And we couldn’t have picked two better examples, as the former highlights a very clear recipe that’s drawn directly from the game, and the latter is something that’s merely “inspired” by it. Then there’s concepts like the “Fel Eggs and Ham” (accompanied by a cute bit of flavor text), which exist in-game, but aren’t a 1:1 recreation (the book’s take is more like a deviled egg).

What you’re getting with all three of these approaches is a well-rounded tome that appeals to just about anyone. You might not be able to parse some of the Pandaren references (and there’s a lot), but the instructions are clear and concise, and the pictures are very well done — there’s only a few (again, out of roughly 200) that weren’t exactly representative of the dish. Speaking of references though, there’s a lot of little tidbits like “Well Fed,” as well as the use of in-game icons and beautiful concept art strewn about its pages. Striking that balance that doesn’t alienate people who don’t care about Warcraft is difficult, but author Monroe-Cassel manages it.

Another unintended bonus that a lot of modern cookbooks are adding these days — a breakdown of big dietary concerns (vegetarian, vegan, gluten free) with a giant glossary at the end. Beyond that there isn’t much help for the two “Vs,” as the author mainly just suggests using a meat stand-in at the start of the book, but the gluten-free guidelines are really useful in providing substitutes.

The World of Warcraft cookbook is more than a tchotchke that speaks to a particular niche. WoW raiders will be able to comb over it and laugh at some of the lore references, and non-fans will enjoy some of the more esoteric recipes and designs. The fact that it’s relevant year round with holiday recipes make it even more appealing to crack open regularly.