While I was sold on the concept of WET — a chick shoots and slices up thugs in a grindhouse-inspired action game — I wasn’t exactly sold on what’s arguably a game’s most important aspect: How it plays.

I had some hands-on time with the game at E3, and while it was enjoyable, I was admittedly a bit underwhelmed. When that same E3 demo hit consoles a few months later, my original impressions had been confirmed — lots of style, with little substance and questionably stiff and sloppy controls. Still, the “chicks shoots and slices up thugs” hook was strong enough that I went into the final game with an open mind.

For the first hour or two, my opinion had changed for the worse. But then something happened, and I went from annoyed and frustrated to grinning ear to ear. I soon found that, despite its flaws, I was having a great time. So what happened? How can one go from near-hate to love so quickly?

WET is the story of Rubi Malone, a professional “fixer,” a gun-for-hire skilled in acrobatics, firearms, and the way of the sword. Not much is known of Rubi’s past, and the game’s narrative doesn’t even make any attempt to fill out her back story. You know what you need to about her — she’s good at what she does, she doesn’t take any sh*t, and if you get in her way, you’ll die… and that’s that.

Despite the lack of any real context, WET does have a surprisingly interesting and gripping (if not sometimes completely absurd) story, enough so that fans of b-grade flicks and action will want to see it to its end. To say much of anything about the game’s story would give too much away, but suffice it to say there is double-crosses, revenge, lots of gun fire, crazy characters, and enough limbs being severed to satisfy.

WET is a game based entirely around its stylish action, a mix of acrobatics, sword play, and dual-firearm wielding. In fact, the more varied your kills, the more Style Points you’re awarded. From the start, Rubi can drive and slide, all the while pointing her pistols (and later, machine guns, shotguns, and bows) at multiple target. 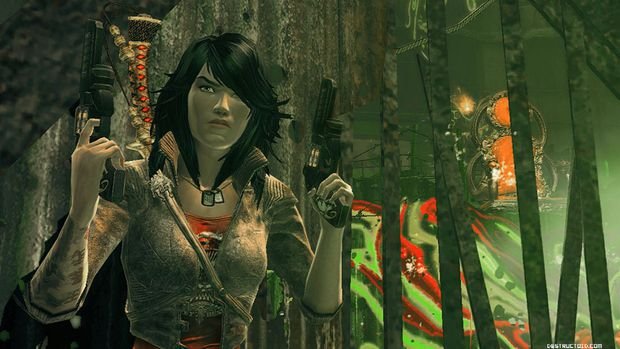 During any of these acrobatics, pulling the trigger to fire will cause the game to go into slow motion, allowing Rubi to get a better beat on her enemies. One gun will auto-target, with the right analog stick used to free target another enemy of your choices. This split targeting is WET‘s few gameplay innovations allowing Rubi to enter into an unlimited bullet-time sequence, twisting her body into all manner of positions to take out her targets. She’ll bend over backwards while mid-slide, or twist her 360 degrees to target her enemies.

Talking about how it feels to make Rubi do these types of things is tricky; early on the game, it’s nothing short of frustrating, bordering on abysmal. Rubi’s initial move set is limited, and doesn’t do justice to the character, a supposedly experienced killer and one of the best at what she does. She feels gimped and stiff, which translates to frustration with the controller in your hands. Compared to other games of its type, it feels like there are actions missing where they should be. Why can’t Rubi run up or or an enemy? Why can’t she slice her sword while mid-jump, or fire her weapon when swinging on a pole? In short, being Rubi isn’t quite as cool (or as fun) in the game as you’d expect.

But then you start spending those Style Points you’re accumulating and upgrading Rubi’s abilities – things like her rate of fire are increased, and suddenly she’s able to do all of those things you wished she had been capable of doing from the start. She can run up an enemy’s body and flip backwards, going right into a slick slow motion sequence where you can target two enemies at once mid-air. Later, she can run up an enemy and then immediately slam down with her sword as he falls backwards, or go directly from a slide into a rising slash with her blade. By the time you’re at the game’s sixth or seventh chapter, Rubi’s nearly fully upgraded, and with those upgrades comes a better sense of control, and ultimately, a hell of a lot of fun. 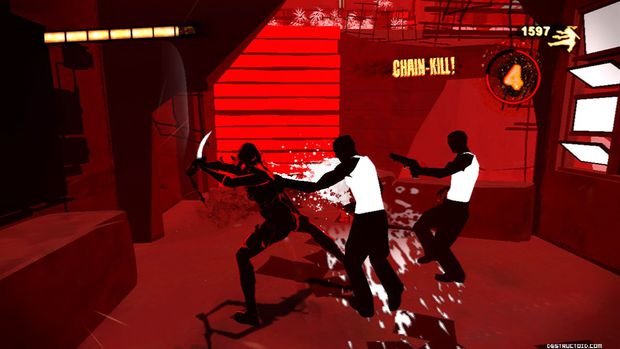 This curve is both an unfortunate and brilliant move on A2M’s part. It’s genius in that once you realize how the progression is affecting how you’ll play the game, you will not want to stop. Disappointingly, some players may be turned off early on by Rubi’s limited control and moveset; it won’t be until the game’s halfway point that you’ll be almost fully upgraded. But trust me when I say the payoff is well worth it, and I think you’ll agree when you’re flipping from pole to pole, or split targeting thugs before slicing them down the middle with Rubi’s sword.

WET is broken up into a few distinct gameplay sections the first of which are the straight-forward, open environment sword and gun combat that you’d expect from a third-person action title. Some areas, however, are closed-off “Spawn Arenas” in which Rubi must fight destroy paths in which an endless swarm of enemies will spill out. These areas are generally set up like a “playground,” designed to let Rubi get the most style from her kills, be it running up or across walls, or swinging on poles. And they almost always end with someone getting stabbed directly in the crotch or losing a limb, which is something I can get behind.

The game also features light platforming sequences, with players using “Rubi Vision” (hold down a button to light up ledges, etc.) to find acrobatic spots in the environment to move forward. Unlike the combat controls, you can’t upgrade Rubi’s platforming abilities, and they do feel a bit permanently gimped. Clearly, A2M looked to games like Ubisoft’s third-person Prince of Persia titles and Tomb Raider for these sections, but the results aren’t quite as successful as the games that inspired it. While while quickly navigating the environment can be empowering, there are enough spots where Rubi will fail to catch a ledge or be unresponsive in a jump that it can sometimes be an exercise in frustration. It doesn’t help that oftentimes the path is unclear, and you’ll attempt a leap in a direction the developers didn’t intend, only to die and be sent back to a far off check point. 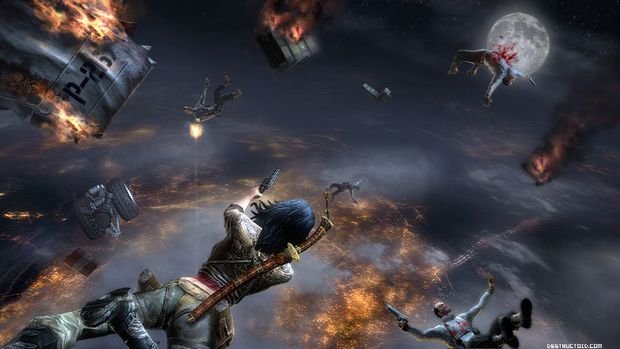 WET breaks up the typical action in other ways as well, including the “murderous rage” sections. These, for the most part, are is simply a highly stylized version of the game’s straight-forward action sections. These “rage” events are all trigger the same way — Rubi fires a bullet at an enemy’s face in a cut-scene, splattering blood all over her own grill and triggering the sequence. The game’s visuals then change to indicate the rage, with everything turning black, red, and white. It’s a look likely inspired by Frank Miller’s Sin City, and will definitely be compared to Platinum Games’ MadWorld. Despite looking damned cool and Rubi seemingly being a bit faster and more powerful, these more or less play identical to that of the standard action sequences.

You’ll also get thrown into a few big, action-movie sequences that mix quicktime events with analog stick shooting. While the over-the-top sections make up some of the coolest looking action sequences in a game (flipping cars, sliding motorcycles, etc.), they can also be some of the most frustrating. A slip of your finger or brain can result in missing an quicktime event, resulting in failure which sometimes puts you back to square one, having to play out most of a sequence again.

One section in particular, a sky diving section in which you must carefully navigate Rubi through the debris of an exploded airplane rank among one of my most frustrating, obnoxious moments in gaming. (See also: The spinning Blades of Hades in the original God of War.) Despite this, these sections to highlight what the game is really all about — ridiculous and impossible over-the-top action. 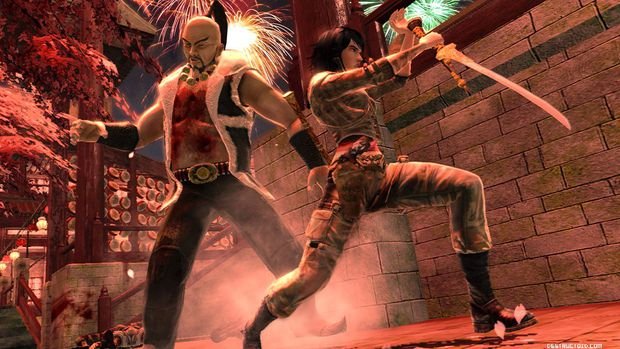 Really, A2M does an admirable job of nailing that action from beginning to end with WET. The game sticks close to its influences, with an awesome visual style that references schlock action films of the 70s, and borrows liberally from Quentin Tarantino’s adaptations of the genre. A2M even pulled some amazing drive-in movie commercials and intermissions out of the archives for in-between levels, like my personal favorite for “Chilly Dilly, the personality pickle” that simply must be seen.

From a technical standpoint, the game’s art design isn’t entirely supported by the game’s engine — WET isn’t particularly the prettiest game on today’s consoles. The game’s optional “grainy film” filter helps out a bit and adds to the vibe, but the discerning might call “last-gen” shenanigans on the game’s graphics if they’re so inclined.

While a series of timed challenges open up after the game’s been completed, Rubi’s tale can be completed in a relatively short amount of time. Because of this, even though WET is a blast despite its flaws, it’s difficult to recommend the game as anything more than a rental… for now. As it stands, the game’s MSRP of $59.99 seems about twenty dollars too high. Keep your eyes on price drops, because when all is said and done, WET‘s a wild third-person action/adventure. 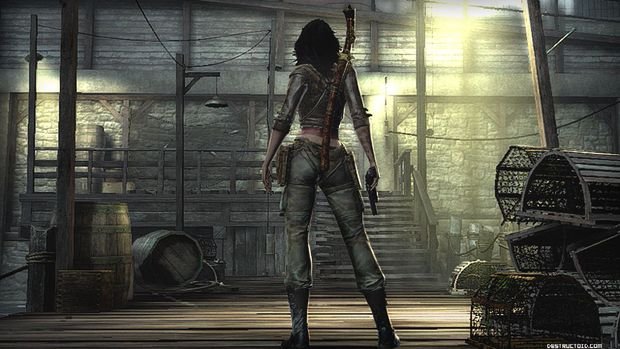 WET is successful in translating the feel of a b-movie to a videogame format, and it is what it sets out to be — a fun, gore-soaked, action-packed good time. If you’re on the prowl for the popcorn flick of gaming, look no further that WET.