For every beginning there is an end; for every initial episode of a new, adorable Telltale Games episodic series, there is a finale.

For better or worse, the fourth episode of Wallace and Gromit’s Grand Adventures, entitled The Bogey Man, will be the last of its season. Having trounced mutant bees, evil dogs, and a mustachioed swindler, will Wallace and Gromit’s final adventure live up to the charming mystique of the previous episodes?

This is typically where I’d offer a contrast to the previous sentence wrapped some sort of pun related to the game’s title, but Wallace and Gromit are too genuine for such shenanigans.

Hit the jump for our official review. 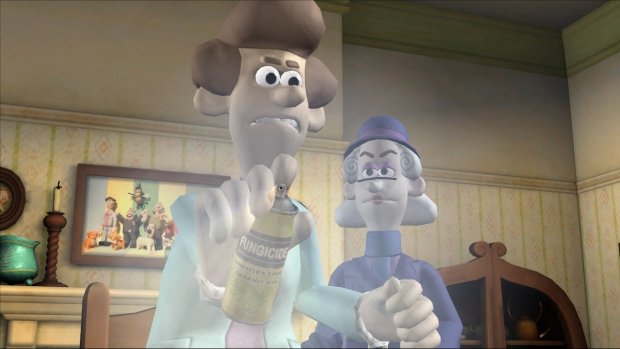 Let’s be entirely honest: it’s probable that you’ve already made your mind up about the Wallace and Gromit episodes. You’re either never going to buy them, or you’ve already purchased the season pack and have not yet gotten around to playing The Bogey Man yet. There’s really only one question that matters at this point: is The Bogey Man a satisfying conclusion to Telltale’s most adorably charming episodic series yet?

Where previous Telltale finales tried, with mixed results, to end things with an epic  bang, The Bogey Man is a much more low-key, intimate affair. There’s no real villain, and the duo’s main conflicts don’t much extend beyond getting Wallace out of his accidental engagement to Felicity Flitt. For a series so otherwise based on huge villains and fantastic action sequences, The Bogey Man is the most low-key installment since The Last Resort.

Unlike The Last Resort, however, The Bogey Man‘s small scale actually works to its favor. The final episode boasts what may arguably be some of the best writing in the series. Before this last week, I don’t remember ever actually chuckling at an episode, but heck if I didn’t laugh out loud four or five times. Major Crumb, in particular, has more than a few impeccably delivered lines. Where The Last Resort was boring because it revolved around pleasing the suddenly-irritating denizens of West Wallaby Street, The Bogey Man forces Wallace and Gromit to interact with the other townspeople in just the right amounts and contexts to highlight the quality of the writing. 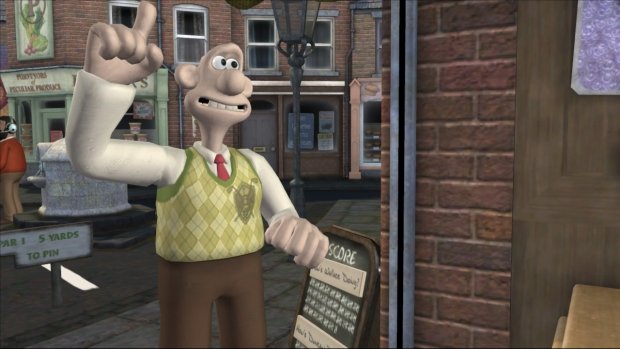 The puzzles are also better than usual this time around, if a little more unfocused. You’ll have to move between three locations (one of them new) with some frequency in order to solve the puzzles, which come at you in a pleasingly nonlinear format. At any given time, you’ll have two or three objectives to complete, which can be tackled in any order. The other episodes dabbled in a similar structure on a much smaller scale (finding the ingredients for Wallace’s growth formula in Fright of the Bumblebees, for instance) but almost all of The Bogey Man‘s conundrums are delivered to the player in this way. It’s a nice change of pace, and makes the episode feel much more challenging in a general sense.

The hint system feels particularly unhelpful this time around, as the game can’t accurately predict which puzzle you’re trying to solve when you’ve got as many as three in front of you at any given time. You might get a hint that inadvertently solves a puzzle you had planned to tackle later, or completely fail to get any useful suggestions for a puzzle you do want to complete because the game thinks your attention is focused elsewhere. Even if you’ve never before had to consult a walkthrough for a Telltale game, The Bogey Man‘s nonlinear structure and broken hint system might break that habit. Whether that’s a good or a bad thing ultimately comes down to how challenging you like your adventure games to be.

Overall, The Bogey Man is a perfectly servicable, if unspectacular finale to Telltale’s great Wallace and Gromit series. A new puzzle structure, improved writing, and more challenging brain-twisters make this episode feel entirely fresh. The series may not end with a bang, but The Bogey Man sure as heck isn’t a whimper.