Ah, Wallace and Gromit’s Grand Adventures. With half your season already complete, what will you offer us in the final two episodes? We’ve already taken on mutated bees and unruly houseguests — what’s next?

Today, we find out the answer. Muzzled!, the third of four Wallace and Gromit episodes, tasks our heroes with saving a group of homeless puppies, taking out a maniacal, mustachioed malfeasant, and, time permitting, eating some ice cream.

But is Muzzled! a worthy addition to the Wallace and Gromit legacy? Does it reach the heights of the first episode, or does it share more in common with the series’ underwhelming second installment?

Hit the jump to find out what Anthony Burch and Conrad Zimmerman thought.

Muzzled! is the cutest Wallace and Gromit episode thus far. Sure, it’s got some of the series’ best puzzles and a much better plot than The Last Resort, but my enjoyment of all things Wallace and/or Gromit related tend to hinge heavily on how charming they manage to be.

Given that this newest episode concerns the duo’s attempts to save a trio of homeless puppies from the hands of a maniacal con artist, I feel justified in calling Muzzled! a pretty adorable success.

The situation is as follows: West Wallaby Street’s puppy shelter has broken down, sending countless (and by “countless,” I mean “three”) puppies loose on the town. Luckily, a newcomer named Monty Muzzle offers to rebuild the town shelter through ticket sales for his travelling fair, which itself boasts a pie contest, tic-tac-toe versus a chicken, and a large, inflatable likeness of Monty’s head. After befriending the three lost (and, once again, adorable) puppies and delivering them into Monty’s assumedly loving arms, Wallace and Gromit begin to suspect that there may be more to Monty Muzzle’s fair than meets the eye.

Well, Gromit begins to suspect something, anyway. Wallace sort of stands around like an idiot and makes fish-flavored ice cream, because he’s Wallace. 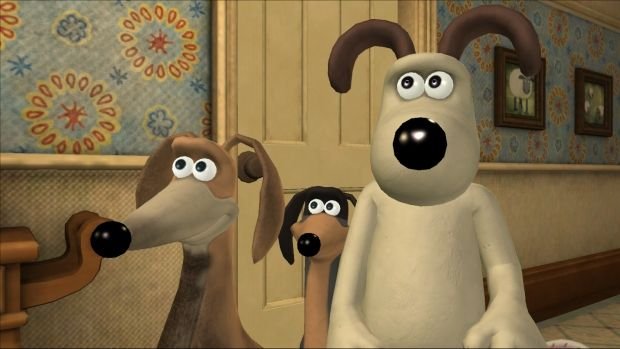 Though you might not think so from reading a poorly summarized description of the plot, it does not quite follow the typical structure of the previous two episodes. Where Fright of the Bumblebees and The Last Resort lent themselves to constant protagonist switching between Wallace and Gromit, Muzzled! is separated into two distinct acts. About 80% of the episode takes place from Gromit’s perspective, while Wallace only becomes playable during the last 20% of the episode. While one might assume Gromit’s silent shakes of the head at every incorrect puzzle solution would get tiresome after a while, the Gromit-heavy narrative actually represents a refreshing change of pace for the series. Gromit has a distinctly personal stake in solving the mystery of Monty Muzzle’s circus, and thus it makes perfect sense that the player would spend more time in his shoes than Wallace’s.

The new characters are all quite likeable, as well: the three dogs Wallace and Gromit befriend are cute as hell (I literally muttered “awww” more than once while playing through the episode), and Monty Muzzle is a serviceable villain. He’s not quite as cool as the penguin from The Wrong Trousers — but really, who is? — but he’s pretty much on the same level as the evil hunter from Curse of the Were-Rabbit. I wouldn’t mind seeing him again.

Generally speaking, Muzzled! probably has the most well-balanced puzzles of the three episodes. While Fright of the Bumblebees suffered from one or two poorly placed inventory items, and The Last Resort structured most of its puzzles around the generally uninteresting supporting characters, Muzzled! hits a pretty good sweet spot. The puzzles were complex enough to make me think, but not so esoteric that I ever became frustrated. Each of the parlor games at Muzzle’s funfair represent distinct puzzles that are typically solved in very different ways, and are all the more satisfying for it. Only a couple of puzzles truly felt too easy — and while that may seem like a complaint, I really can’t think of too many other Telltale episodes with such a good batting average. Combine that with a final boss puzzle that’s almost as satisfying as the one from Fright of the Bumblebees and an epilogue that gives new meaning to the phrase “mustache ride,” and you’ve got some of the best gameplay the series has yet seen. 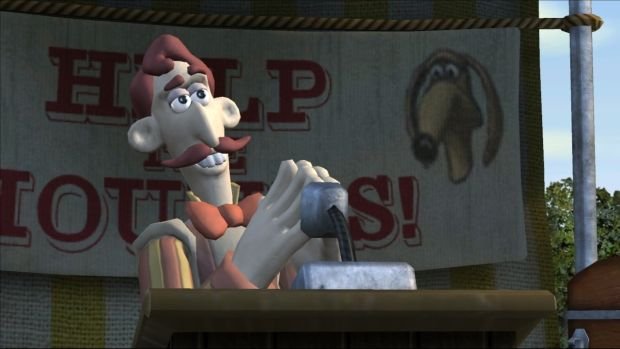 Overall, I think Muzzled! is probably the best Wallace and Gromit episode yet. It doesn’t possess quite the same surprising charm as the very first installment, but it sidesteps nearly all the problems with the previous episode and provides a well-plotted, relatively challenging adventure experience.

Also, one of the characters is a dog named Twitch who gets frightened by everything and has to carry around a stuffed bunny rabbit to make him feel safe.

Mister Burch’s assessment of the cuteness which permeates throughout Muzzled! is no overstatement. This is one damn adorable installment of Wallace & Gromit. The three new pups that you meet add a great bit of additional humor to the story with their idiosyncracies. At one point, I repeatedly made the thieving one play dead just because I loved the animation.

It’s also nice to see that one of Wallace’s inventions plays a central role in some puzzles again. The Infiniflavor — named for its capability to create any flavor of ice cream — is a cute idea and a far better fit for the series than resort management.

Item management puzzles play as much of a role as they ever have, but tracking down the necessary kit is made easier by restrictions on where you can travel. Most of Wallace’s house is blocked off for the first half of the game, whereupon the rest of the house becomes inaccessible. Having fewer places to look for stuff to solve puzzles removes a lot of the frustration. 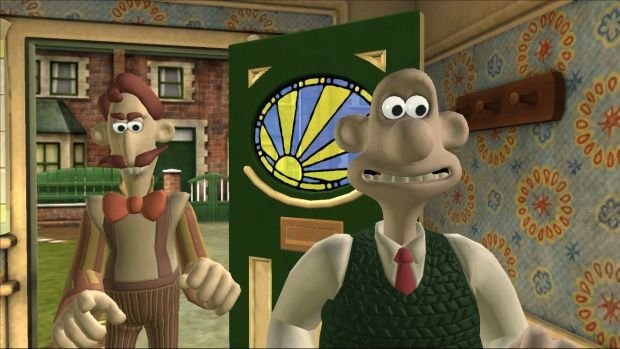 Pretty much everything happens in the confines of the fairgrounds once you have the game’s introductory puzzle out of the way, anyway. It’s really good to see Telltale open things up a little bit more, as another game shuffling back and forth between W Wallaby St and the town square might have been less appealing.

Which is great for the latter two-thirds, but the areas accessible by Gromit inside Wallace’s house wound up with a lot of interactive objects in the environment that served no real function. These objects are leftovers from prior episodes and, save one, don’t even have any entertainment value since you’re working with the character incapable of more than subtle gestures. It can make the first puzzle a little annoying as you look at all these objects and find nothing of use.

Despite these frustrations, the charm wins out through and through this time. The writing is quite funny and Wallace’s nervously polite disposition is out in full force upon the realization that Monty Muzzle is not the philanthropist he appears to be. And the twist ending sets up what I hope will be a very uncomfortable situation for the hapless inventor in the upcoming finale of the series.

All told, this is handily the best entry among the episodes thus far. If you’ve held out on playing these, this is the point at which I can wholeheartedly encourage an investment in the series.