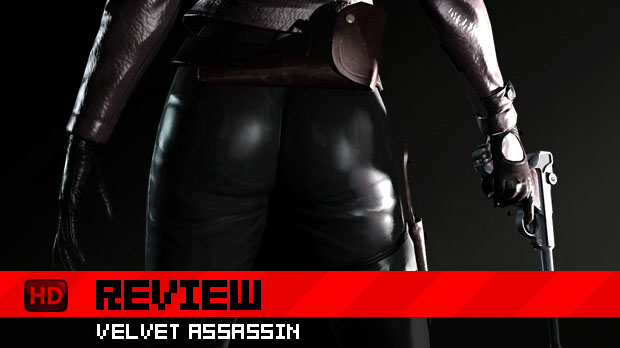 This review does not have a score attached to it. After playing up to the fourth chapter, I had enough of what has been among the most miserable gameplay experiences of my life. Apparently we are not the first outlet to do this either, but this Velvet Assassin review is written based on the amount I was able to play before seriously considering just sending the disc back to Southpeak and scrapping the review altogether.

Rather than scrap the review, it has been decided to make a concession and be fair to Southpeak by leaving the game unrated. I suppose what follows is more of a consumer warning than anything else. Call it what you like, but feel free to read on for our “review” of Velvet Assassin.

Velvet Assassin is loosely based on the story of real-life WWII spy, Violet Szabo. Taking on the role of Violet Summer, players will sneak their way around Nazi-occupied Europe, sabotaging the nefarious plans of the Third Reich and assassinating key members of the Aryan Race. The story unfolds over a series of flashbacks, as a bed-ridden and severely injured Violet recalls her past missions. If you play up to chapter four and then throw the game away, you’ll never find out how Violet got into her current state of affairs. You will, however, have a higher quality of life, so it’s a good trade-off.

The game is supposed to be about an ordinary woman who has an extraordinary job, and the developers have taken this to an extreme. Unlike popular stealth games like Metal Gear Solid and Splinter Cell, which are popular for a reason, Velvet Assassin tries to be as realistic as it possibly can. This means that Violet is no Solid Snake, and is unable to defend herself once discovered by the Nazis and prone to dying within seconds of detection. Here is where we learn that real-life spy missions are not very fun, and that’s why we play videogames. 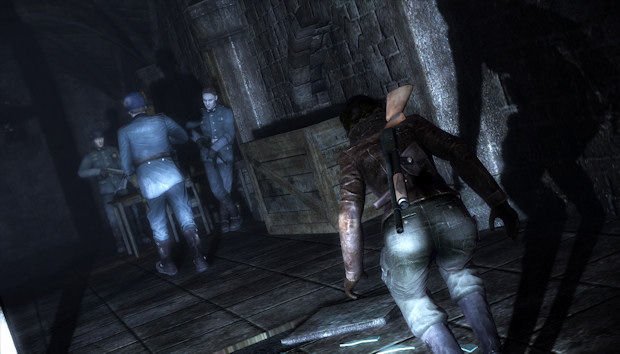 Because Violet cannot fight properly to save her life (I’ll be kind and pretend that the terrible weapon aiming system was done on purpose for the sake of precious realism), the game presents itself as stealth in its purest form. This means that the whole experience is about watching Germans patrol areas for a very long time, sneaking up behind them for a very long time, and then pressing a button to watch Violet kill them in a boring and repetitive way. Over and over again.

This would not be so bad were it not for the terrible lapses of judgment employed within the game’s design. First of all, the amount of time spent doing nothing is unforgivable. There are times that you have to sit and wait for the enemies to finish their conversations, which can last upwards of five minutes, before they’ll patrol. Once they start patrolling, you then need to sit in shadows for even longer to slowly work out their movement patterns — something that is made very difficult thanks to the lack of in-game map, bad camera angles and perpetual darkness. 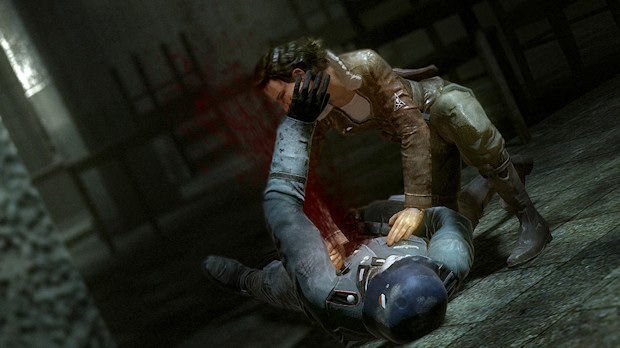 Again, this might have been bearable were it not for the lack of an ability to save your game properly. Velvet Assassin relies on checkpoints, many of which are too far apart. This means that if you die, you have to sit through the SAME conversations, all of them in German, and all of them translated with very tiny text that can hardly be read (apparently a Southpeak specialty). It’s basically forcing you to sit through an unskippable cutscene without the benefit of having anything to watch, and that’s simply unacceptable. If you could save anywhere, had closer checkpoints or, even better, removed the inane and pointless conversations altogether, perhaps Velvet Assassin could have been more pleasant. Unfortunately, it is not.

This is made worse by the random enemy AI. Violet can hide in shadows, obscuring her from enemy sight. Usually, she can remain invisible even while crouching three feet away from an enemy’s face. Sometimes, however, the Germans eat lots of carrots and can see in the dark with magic cat eyes. At other times, the Nazis will see and shoot through walls. They randomly switch between being total morons and the genius superman that Hitler always wanted them to be. 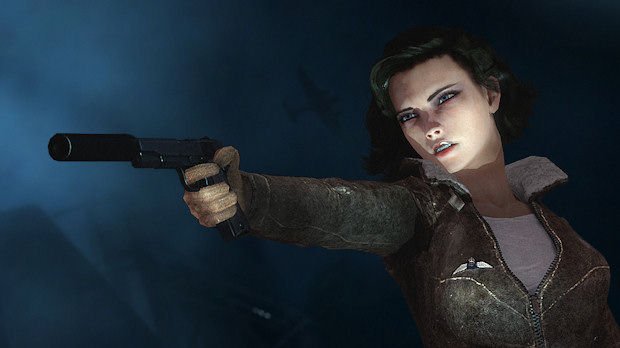 Compounding the screwy AI is the random way in which enemies react. At one point, I had to restart a section of gameplay only to find that one particular German had completely broken his own patrol pattern. At another time, I was spotted by enemies who then would not return to their patrols, even after I had escaped and allowed the commotion to die down. They instead waited at the room’s entry point and just … stayed there. They stayed there waiting for me to enter until I got sick of it and switched the Xbox off.

The problem here is that Replay Studios strove for realism, then stuffed it up with abhorrent AI that allows players to continually suffer punishment without ever knowing what it was they did wrong. If you’re going to make a realistic game, you can’t then toss in enemies that don’t conform to any established realm of logic. The game fails to do what it set out to achieve, seemingly through having ambitions that far surpassed the skill level of the developers.

The game plays like every shoehorned stealth section in every bad PS2-era action game. Its fundamentals are ancient, with the most simplistic and restricted gameplay ever seen in the genre. Metal Gear Solid was a successful game because there was so much to do. You could sneak your way around the game in a variety of different ways, with all sorts of weapons and tricks and hidden tactics. In Velvet Assassin, you sneak, kill, sneak, kill, die, repeat. I realize the game isn’t trying to be Metal Gear Solid, but maybe it should have. Maybe then it would not be so bad. 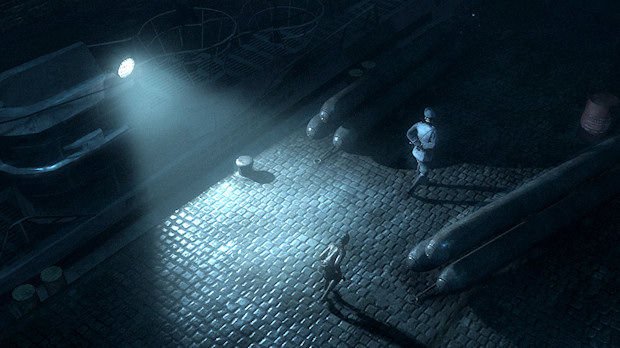 The game attempts one innovation, although to call it that is to speak with more regard than it deserves. Violet can collect and carry one morphine injection with her at any time. The morphine shot is what I like to call the “ah, fuck it” mechanic, and is used for when you get fed up with a particular Nazi who just seems to be standing there, blocking your path like a twat. Morphine is basically a free pass that will freeze time and allow you to kill one Nazi without penalty. That is, after you run up to him in a skimpy nightgown, because sexing up a war hero is the most respectful tribute a game can muster.

At times, Violet will also have access to disguises, although their implementation is just as nonsensical as the rest of the game. While dressed in the SS Uniform, for example, Violet will be unable to sneak up on enemies due to her high heels, which apparently she couldn’t just take off. However, you’ll be able to walk around in plain sight, unless you get too close. By too close, we mean “not all that close at all.” The disguise sections are worse than the sneaking ones, since Violet is even more defenseless and the Nazis can apparently tell the difference between a German and a Brit simply by looking at them. Also, Violet can’t take off her SS Uniform unless she finds a toilet to hide in, even though a German catching a glimpse of her snatch is surely the last of her worries. Again, I refer you to Metal Gear Solid, most notably Snake Eater, to show you how to do a disguise section properly. Disguises should empower a player, not make them even more vulnerable. 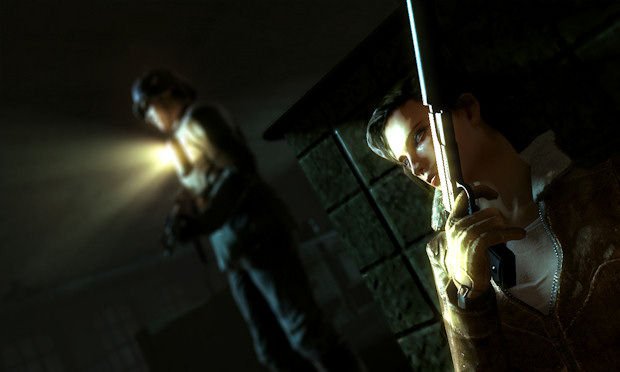 At least the game looks fantastic, and by that we mean it doesn’t look all that great at all, actually. The animations are rubbish, the environments rather uninspired and the character models themselves simple and repetitive. Velvet herself looks like a crackwhore, which makes the sexy catsuits even more inappropriate, and as far as the sound goes … well … the singing Germans are quite funny the first time.  Less funny the fifteenth time.

This is the worst game I’ve played this generation so far. I wish I could be kinder, but I simply can’t. The thing is a waste of time and money, and feels like a robbery of one’s very life, not to mention cash. All I can say is, Velvet Assassin is very lucky that we’re not scoring it.