I realize that the percentage of our readers that are legitimately in the market for a $300 set of headphones is fairly small, and honestly if you don’t think dropping that much cheddar is ever worth it, then I probably can’t convince you here and now.

If, however, you are crazy enough to want to spend a, quite frankly, irresponsibly large amount of money on such an accessory, then I genuinely believe it should be the M-100 for one reason — they’re actually somewhat practical. 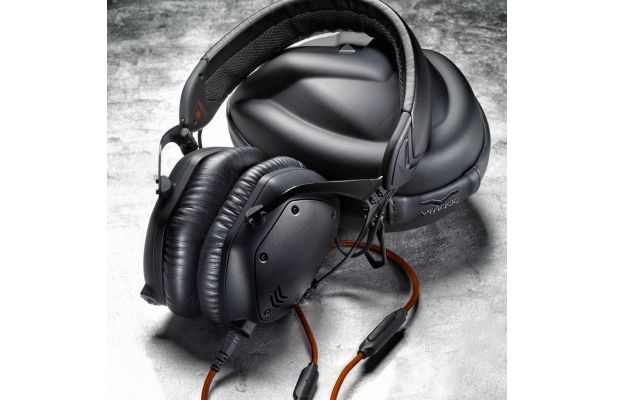 Now, obviously that claim doesn’t go without qualification, and what I really mean to say is that this set is practical compared to what else is on the market at that price level, but these things are pretty incredible for their cost.

At $300, you’re mostly getting into reference-class headphones. That tier consists headphones that are very, very well made with a bunch of cool things like gold contacts, large, well-calibrated diaphragms for accurate sound reproduction, and all that other fancy goodness. V-Moda has all of those nifty features here too, but they’ve also brought a pragmatic mindset.

For example, most of those sets can often have a resistance of 300 or 600 ohms. The M-100, though, only have a resistance of 32 ohms. For the average consumer, all this really means is that you can use these guys on a portable media player or a laptop without having to go out and buy a separate (and often very expensive) headphone amplifier to boost the signal. That portable philosophy is really what is so impressive about these. They can be used almost anywhere, with almost any set of equipment.

The Crossfade M-100 isn’t quite like anything else. Portable, light, and relatively small with interchangeable cords and a built-in microphone by default, it’s very unusual but totally amazing.

All of these features are the result of its crowd-sourced design. Headfi, a forum for headphone aficionados like myself was tapped by V-Moda to figure out what people really wanted in their next set. The result is something of a cyberpunk version of Frankenstein’s monster. 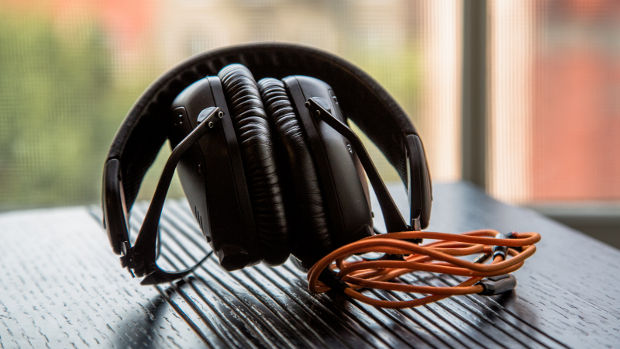 The cable for the M-100 is, thankfully, replaceable. This means that damage to the plug and the cord, which are typically the first parts to fail, doesn’t necessitate that you replace the whole set. Beyond that, the cords themselves are reinforced with Kevlar. The stuff they use to make bulletproof vests. And you get two of them. Taking it a step further, either ear cup — the left or the right — can be used to plug in the cable. So if one of those fails, you still have another option. V-Moda also includes a few caps to keep the unused plug from getting dirt or grime inside.

Of the two cords that come with the headphones, one has a TRRS connector (which really just means that it has a built in microphone and pause button), perfect for a standard cellphone. The other is something that the company calls a “SharePlay” cable which really just means a super-awesome version of a splitter so that your friends can listen too.

The entire frame is made of steel, which is a welcome change from most other headphones which tend to take the cheap route with plastic. This means that the headphones don’t creak at all with pressure. There was no give when I applied force, and I even dropped them on the ground a few times without noticing any scratches or damage. The steel does add a little weight overall, but this set is still quite a bit smaller than other $300 sets, so the difference isn’t too noticeable. 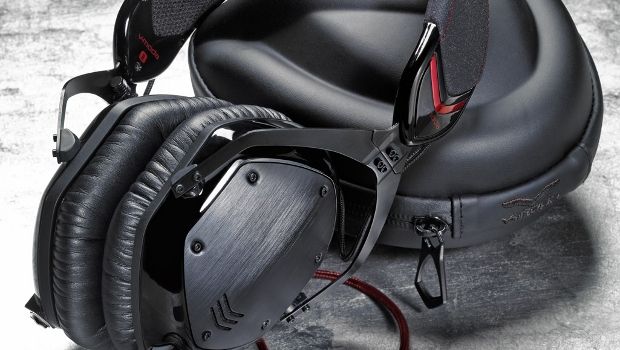 Ear pads are another place where most companies tend to go pretty cheap, but again we see a dedication to quality throughout — in this case, the cups are made of memory foam and well-designed for almost any sized ear. I can also say as someone with pierced ears, that the memory foam works splendidly — it didn’t place any additional, unnecessary pressure on my ring-ed lobes. I found that I could wear the set for 5-8 hours straight with no discernible discomfort whatsoever. Your mileage will vary of course, but I can’t imagine anyone wanting to tear off their ears in horrific, unbearable pain.

Speaking of which the M-100s also comes with a really, really tough carrying case that can definitely take a good hit. I took a few solid swings at it with a hammer and did no permanent damage to either the case or the headphones inside. It also has little harnesses for all of the cords and small accessories included. With any luck this set will last you a good long while.

Now, the set that I reviewed also came with a dedicated add-on mic for gaming and eSports and Skype and stuff. This too comes reinforced with Kevlar, because why the fuck not, guys?! Other than that, though, it’s a pretty standard, flexible boom microphone.

It’s not quite as cool as the one on the A50s that are muted automatically when you flip it away from your face, but it definitely holds to the same ridiculous level of quality seen everywhere else in this set. Its only notable downside is that the connectors provided pretty much make it impossible to use with a console. With only a TRRS connector and an adapter for PC users, you would be hard-pressed to jury-rig the thing to get it to work on the Xbox 360 or PS3. Thanks to that adapter it is theoretically possible, but it would be a huge pain in the ass. 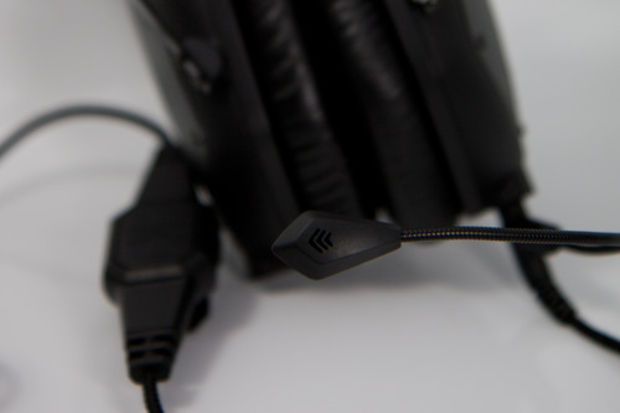 I do have a few tiny nitpicks that don’t neatly fit into any category I’ve discuss thus far. On either ear cup, for example, a small cord runs up into the headband. While aesthetically that cord looks totally badass, I’ve managed to get it caught on a couple of things. It is Kevlar reinforced like the other cables, but these things aren’t user-replaceable, so I freaked out a bit. Obviously, this is a very expensive set and causing damage is no bueno.

I can’t tell you just how much I love these things from a purely “Holy shit, why doesn’t everyone make life easy for like this” way. But they do sound damned awesome. Allegedly they have a dual-diaphragm design with 50mm drivers in each cup. What does this mean for the non-aurally fixated? Well, balancing high tones and low tones in a set of headphones or in any set of speakers that don’t have separate tweeters and woofers, is really hard. The kinds of stuff you need to produce good bass and good highs are very different. Most reference-class headphones go for the mid-tones instead. As a result, those of us that like heavy bass for … I dunno rap, or techno, or gunshots in Half-Life 2 miss out on what we tend to prefer.

Now, a lot of people don’t like the heavier bass of DJ-class headphones, but that sound profile can mostly be fixed with a decent equalizer. Having that deep, rich bass capability as well as the range to really make the highs sing is a rarity though. In all of my tests, I noticed no tinny sounds, nor any bottoming out on the low end. Everything performed perfectly. To cause failure I had to connect them to amp and run a dangerous amount of power through them. The M-100s will keep up with whatever crazy stuff you like to listen to at any volume that could ever be called “safe” or “reasonable.” If you want to go deaf, then they might start sounding like crap, but you won’t know anyway. Because you’ll be deaf.

I’m amazed by what crowd-sourcing people’s preferences in headphones can do, and now I’ve started thinking that every other headphone company just hates its customers or is too self-absorbed to consider what features customers actually want in a high-end set. Granted, they are by no means cheap. I get that, but if you can swing that amount of cash and don’t need to use them on an Xbox 360 or PS3, then you cannot go wrong with the M-100s.