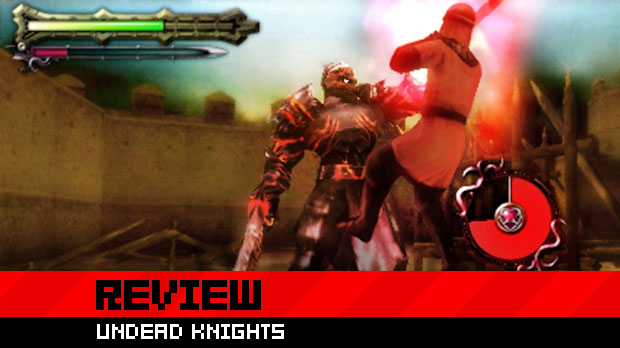 Just when I was getting thoroughly sick of zombie games, along comes Tecmo with another one. Only, this one turns the entire idea of zombie slaughter on its head and manages to do something surprisingly fresh with the whole theme. Take the minion-style gameplay of Overlord, mix it up with some Dynasty Warriors hack n’ slash, then sprinkle zombies over the whole thing. You now have Undead Knights.

So, Undead Knights is unique and strange, but is it actually any good? If you want to find out, look no further than our official review. Read on to find out what we thought of this blood-soaked portable death-fest.

In Undead Knights, you’re not just part of the zombie apocalypse, you’re the cause. After daring to speak out against the rule of Queen Fatima, Romulus and Remus Blood, along with Remus’ bride-to-be Sylvia, are sentenced to a brutal execution by the manipulated King of Cavalier. However, Romulus strikes a deal with a mysterious entity who grants him life after death and the power to turn the living into undead slaves.

The story is a mere excuse to give you a ridiculously oversized weapon and an impetus to hack soldiers to bits with it before grabbing them by the neck and transforming them into rotting meat puppets. When you start the game, you can turn up to ten enemies into zombies, and you’ll need them too. The zombies will act as your own personal army, helping you face the sometimes overwhelming amount of respawning soldiers, as well as tear down barricades and archery towers.

Controls are simple. Square is a regular attack, triangle is a strong attack, and the two can be mixed together to perform incredibly easy combos. Circle zombifies an enemy, triangle and circle together instigate a powerful Rage attack when a meter is full and the R button commands zombies toward a point on the map, where they will attack, destroy, or interact with anything caught in the reticule. In a manner similar to Overlord or Pikmin, various environmental obstacles require a certain amount of zombies to move. For instance, if you send five zombies to a gaping chasm, they’ll create a bridge for you. Throw three zombies onto a huge ogre-like foe, and he’ll drop to his knees, allowing for critical hits. Some actions require a stupidly easy QTE to perform as well, but one hardly notices.

This is pretty much how the entire game goes. You hack, slash, zombify and command undead monsters throughout the whole experience, and while the occassional “puzzle” takes a little figuring out, your options are so limited (command, slam or throw a zombie) that you’ll never really be stuck. The only time I was ever “stumped” by an obstacle would be when doing what I was supposed to do didn’t work the first time, so I assumed I had to do something else. In short — it’s a repetitive, brainless action game.

However, it’s also incredibly fun and undeniably empowering at times. Sending an army of zombies to drag a lone soldier to the ground and swarm all over his screaming body is seriously satisfying, and it’s quite funny to watch zombies stick their heads in cannons and then waddle over to a door to blow it up. The hack n’ slash combat is solid and gratifying, and the whole idea is unique enough to remain interesting throughout the game’s twenty stages. It’s also great to play a game that’s similar to Overlord, but so much more interactive. In Overlord, one always feels that the player character barely does anything. In Undead Knights, the game’s “hero” is always in the fray.

In between levels, players will also be able to upgrade their characters using points earned based upon their performance in the stages. The customization is not exactly deep, but there are useful RPG-lite upgrades such as extra health, faster zombification time, and the ability to gather zombies around the player. There are also a number of “cheap” abilities that give players considerable advantages, but using them will diminish the player’s performance grades.

Despite the game’s simplicity, the sheer volume of zombies and soldiers on screen can get frustrating. Many times I’ve wanted to pick up a wounded soldier to zombify him, only to pick up a zombie instead. Of course, when I need to pick up a zombie, I’ll pick up a soldier — most likely one that isn’t wounded and so takes more time to zombify. With no lock-on feature, attempts to throw zombies at enemies can sometimes miss the mark entirely. It can be a real hassle to get the game to do what you want sometimes.

A number of enemies are also very annoying to deal with. Horse-riders, wild boars and knights with lances frequently rush the characters and knock them instantly to the ground. Often times, the player will get hit, slowly get back to their feet, and then get knocked down by another charging enemy. There’s also no blocking ability, with characters relying on a roll move or using a zombie as a “human” shield to avoid damage.

One other niggling issue I had was the fact that it’s very hard for the main characters to actually kill anything. When enemies are attacked enough times, they turn red, meaning you can instantly zombify them rather than wait. However, it takes so much more damage to finish them off, and sometimes one wants simply to kill the enemy rather than turn them undead. I know why they did it, to stop players accidentally killing enemies that they wanted kept alive, but I feel it would have been better to maybe reserve charge attacks for kills and have normal attacks only wound.

Yes, the game can be repeatedly frustrating and it certainly lacks polish, but that doesn’t take away from the fact that Undead Knights is, at its core, a fun and addictive portable button masher that entertains more than it infuriates. It’s full of silly characters, the metal soundtrack is awful but brilliant and hearing Romulus shout “Burn, fuckers,” never gets old.

Undead Knights is not going to appeal to everyone. Its combat is unrefined and the hack n’ slash mentality will get old for those who demand a bit more depth and strategy to their games. However, those just looking for a replayable and ridiculous portable action game won’t go far wrong with Tecmo’s latest offering. It’s got buckets of blood, armies of loyal zombies and characters that feel like complete and utter badasses. What more do you want?