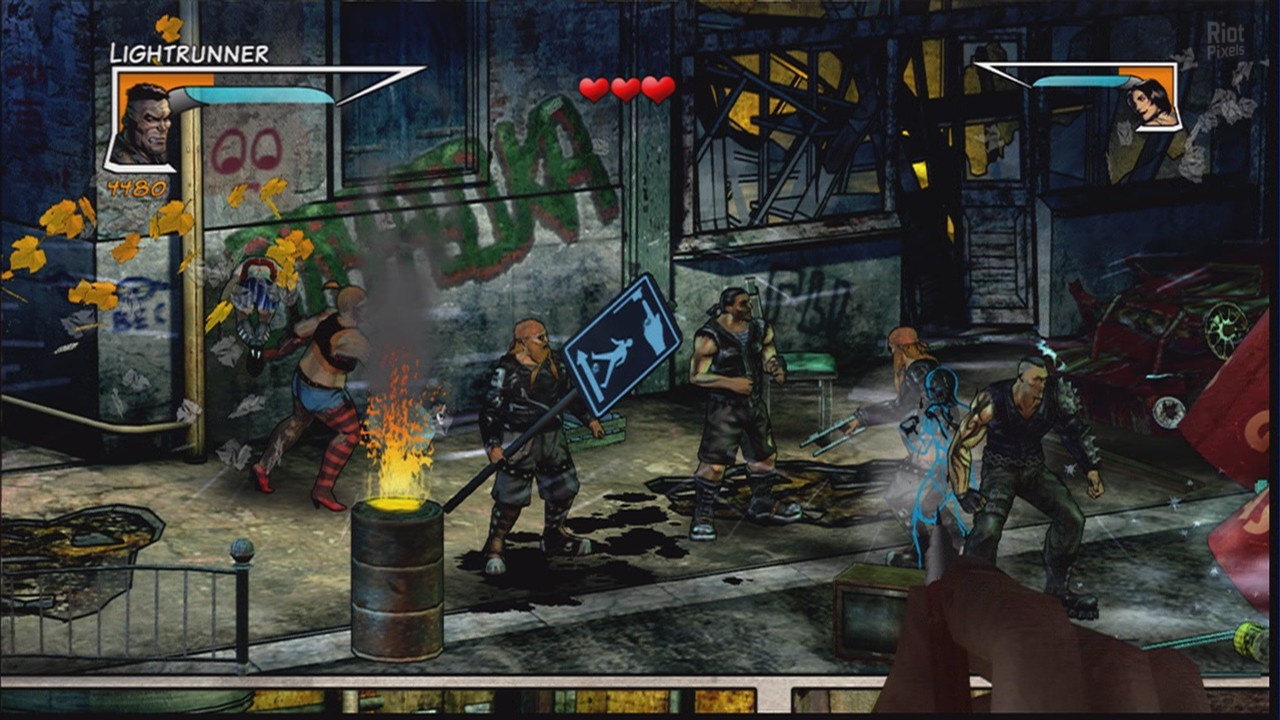 The brawler was looking like a type of game that would never return, thanks to the evolving tastes of gamers and demand for more complex, deeper control schemes. Fortunately, digital distribution has come along, and the need for smaller, simpler, bite-sized titles has seen the old-fashioned brawler enjoy a few revivals, most notably the critically acclaimed Castle Crashers.

Vogster’s Unbound Saga is a dyed-in-the-wool beat-’em-up. Those who grew up with Streets of Rage or Final Fight will instantly feel right at home, which is helped in no small part by the Comix Zone aesthetic.

However, while Unbound Saga has used everything good about this thoroughly retro genre, it’s also kept everything bad. Read on as Jim Sterling and Nick Chester pull no punches and review this downloadable comic book beat-’em-up.

Unbound Saga tells the story of Rick Ajax, a self-aware comic book character who hates the many adventures he’s forced to embark upon by The Maker — the comic artist that has illustrated his fate over the years. Rick’s plan is to track and do battle with The Maker, teaming up with a violent and inappropriately dressed girl called Lori along the way.

It’s a simple premise, with a few ideas lifted from the aforementioned Comix Zone, but it’s carried off with a sense of humor and enough clever writing to remain interesting. The very first line, “I had that dream again. The one about the rabbits and their Molotov cocktails,” was a laugh-out-loud moment, helped along by Rick’s dry and weary delivery every time he speaks.

The silly humor carries through into the enemy designs. Bears wearing aprons, hobos that think you stole somebody’s liver and ninjas that wear shells on their backs in a crude homage to Teenage Mutant Ninja Turtles are just some of the enemies that Rick and Lori will have to face, and their dialog is worth the occassional smirk.

As we said at the top of this review, you know exactly where you are in terms of gameplay if you’ve ever been into an old-school beat-’em-up. While there are more complex combos to unlock during the course of the game, the meat and potatoes of Unbound Saga is the endless hammering buttons to punch, kick and throw enemies around each level.

The combat is simplistic, but repetitive, so if you don’t have the patience for endless beatings, then you’ll probably not find what you’re looking for here. Those of us that remember a simpler time, however, will certainly enjoy the game for the several hours of violent action that it brings. Your moves are governed by an energy meter, that depletes at a minuscule pace for general attacks, but can drop considerably for more powerful moves.

Despite the general focus on violent fun, there are issues. In transporting the simplistic enjoyment of brawlers to the modern age, so too has Vogster transported all the frustrating aspects of such games. Things get very annoying with the amount of merciless enemies thrown at you. The trouble here is that Rick is so slow, and Lori so hard to land a hit with, that you get a sense of constant irritation from battles. Picking people and objects up takes an inordinate amount of time, and one punch causes Rick to drop anything he’s carrying, leading to ridiculous moments where you keep picking up and dropping stuff. The slightly skewed perspective of the game makes it difficult to line up attacks and the slow movement can get quite tiresome.

The moments where you’re forced to play as one character could also have been done without. Lori starts the game incredibly weak, unable to weather much of an attack at all until she upgrades her skills. It’s natural then, that you have to play as her in key moments during the early portion of the game, then play as Rick just as soon as Lori becomes able to hold her own.

The game can be difficult at times, through sheer weight of enemy numbers, but it eases up once you start raising your skills. Tokens are collected throughout the game that can be spent on various abilities, such as a healing power for Lori, or a range of brutal grapple attacks for Rick. The combo attacks feel like a waste of tokens, especially as they are less deadly than Lori’s jump attack and Rick’s slams, yet seem to take more energy to perform. Some of Lori’s Ninjitsu powers are terrific, however.

Unbound Saga looks pretty good, it has to be said, possessing a gritty comic book feel that doesn’t look obtusely cel-shaded. The way each enemy is sketched in by The Maker, and explodes in a shower of paper upon death, is quite classy, and there are even simplistic rag doll physics to keep things looking silly. As hinted earlier, the voice talent is damn good as well, which really helps keep the game entertaining up to its predictable, yet satisfying conclusion.

Unbound Saga is a good game, and as a fifteen-dollar download, is a more than worthy look for beat-’em-up fans. Just be aware that it can feel needlessly frustrating a lot of the time, and those with a low tolerance for repetition will want to steer clear. If you grew up with these sorts of games, however, then Unbound Saga should really be in your collection.

It’s hard to disagree with anything Jim says in his assessment — Unbound Saga is what it is. It’s a classic beat-’em-up game, but one that takes little chances or breaks any boundaries in terms of basic gameplay. In many ways, that sums up both the best and worst of what Unbound Saga has to offer.

As far as the core gameplay is concerned, Unbound Saga is about as basic as it gets, as you’ll simply be moving from one end of the screen to the other (or panel to panel, as in this case), beating up a variety of thugs and bizarre baddies as either Rick or Lori. Fortunately, both comic heroes have upgradable moves and passive buffs, which does its best to keep the gameplay relatively interesting from start to finish.

Unfortunately, while Rick and Lori are a team, Unbound Saga features no cooperative two-player mode. Instead, you as a single player are given the option to switch between Rick and Lori on the fly, allowing you to switch up your play style — Rick is more of a brawler, for instance, while Lori is faster and has a number of special “art” abilities.

Frustratingly, this switching between two characters is not to the game’s advantage, as more often than not I found myself relying more on one character than the other. In most cases, it didn’t matter who I used, so it was just easier to stick with whoever I currently had selected. Outside of a few in-game moments where you’re forced to use either Rick or Lori, there are no real circumstances that will benefit from you using one or the other.

With that said, you’re still likely to swap between characters as often as possible, as Unbound Saga does sometimes verge on the monotonous. Playing through more than one or two of the game’s stages (some of which tend to drag) is not recommended, as this one-trick pony (like many brawlers) can get stale fast. The game also tends to get pretty damned brutal, especially in the later stages where The Maker will be tossing foes at you from all angles. To make matters even worse, the loss of a life means game over… period. There are no checkpoints in Unbound Saga, and dying eight panels (and ten minutes) into a stage and then being asked to start from scratch can be incredibly frustrating.

Still, the game most be commended for what it does right. The game does stay true to its brawler pedigree, with extremely basic, but tight controls. Its biggest achievements, though, are in its look and its narrative, which cling close to its comic book roots in both tone and style. Like Jim, on more than one occasion I did have a chuckle at some of the game’s situations and dialogue. And without a doubt, the game’s animated comics-brought-to-life cut-scenes are absolutely marvelous.

For fans of straightforward brawlers, Unbound Saga is a satisfying experience, with an attractive $15 price point that should make your decision easier to make. Fans of the genre should already be accustomed to the repetition that comes along with mercilessly (and sometimes pointlessly) pounding thugs into the ground, stage after stage. Unbound Saga is no different, but it certainly does it well.

Overall Score: 7.5 — Good (7s are solid games that definitely have an audience. Might lack replay value, could be too short or there are some hard-to-ignore faults, but the experience is fun.)