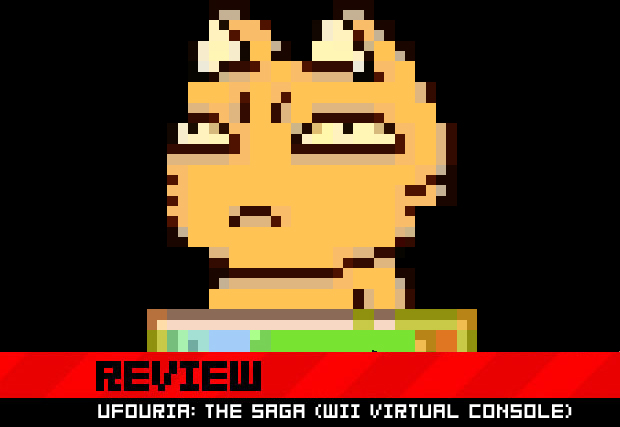 If you’re a Wii owner,  you’re probably focused on Metroid: Other M right now. The eighth Metroid game has already proven to be quite controversial, due in no small part to the widely variant review scores the game has received. Most of the game’s harsher critics state that it doesn’t prioritize the strengths of prior Metroid games — namely, non-linear exploration and a subtle use of atmosphere to evoke a sense of isolation.

Ufouria could be the answer for Metroid fans who aren’t into other Other M. The game is all about non-linear exploration, and it certainly has a unique atmosphere. Exploration is a constant, and isolation is touched upon (at least at the start of the game) — but so are climbing giant strands of drool as they dribble out of floating purple faces, and headbutting a giant battle-armored tabby cat until it’s nude, then stomping its defenseless face until it’s dead.

Sound weird? Well, this is a NES game from the early ’90s, a time when we expected to see unexplainable events such as those in our videogames. Never before released in the United States, Ufouria has built up a reputation for being a “lost classic” of the NES era, and has become something of collector’s Holy Grail.

Let’s find out if it deserves that reputation.

God damn it, who named this game? I hate them. Ufouria is NOT a saga. It’s barely even a story. The game is about four friends who wander around a bizarre world, killing stuff and doing whatever. First they have to find each other. Then they have to find keys to a giant door. Then they go through the door. Then, [SPOILERS] they decide not to leave because they like wandering around in a bizarre world, killing stuff, and doing whatever [/SPOILERS]. That’s it. That’s the “saga.” False advertising son-of-a-bitch, Sunsoft. I’ll never forgive you for this.

Actually, I don’t care that Ufouria has nearly no storyline. What it lacks in narrative, it more than makes up for in imagination. This is how I’d want an Adventure Time! with Finn and Jake game to be. That’s how weird we’re talking here.

It all starts with the game’s playable characters. The Ufouria gang includes a ghost whose primary attack is launching his heat-seeking eyeballs out of his face; a frog-man who spits up explosives; a confused-looking dinosaur; and a weird penguin-alien thing that can stretch its neck like Dhalsim from Street Fighter II for a long-distance headbutt attack (good for killing cats). Imagine a Mario game where you could switch between the Tanooki suit, the Penguin Suit, a Bonk (from Bonk’s Adventure) suit, and the Frog suit at any time, but if the Frog suit let you vomit bombs. Those who speak Mario-ese will understand — this is pretty cool.

Ufouria combines that kind of Super Mario Bros.-style action with Metroid-style power-up collection and exploration. The game has a fairly big open-world environment, and it really nails the non-linear feel. Though the game only gives you two or three potential goals at any one time, it makes you feel like the entire world may open up to you if you navigate it correctly. A good 2D action/exploration game makes you feel like you’re sequence-breaking (getting into areas that you shouldn’t be allowed to enter yet) as you explore, like your ability to think outside the box (sometimes literally) is constantly rewarded. Ufouria nails that feeling, more so than most recent Metroid-vanias and other high-profile action/exploration titles.

From a craft standpoint, the game is very well-put-together. Being one of the last games released for the NES, it’s clear that years of programming experience helped give Ufouria a visual boost. The animation of the game’s four main characters is incredibly smooth for an 8-bit title. Just looking at these little weirdos run around and do their thing is a treat unto itself.

Part of that is because this is a straight port of the PAL version of the game. PAL games run faster on NTSC consoles, and that speed kick makes the game’s animation even smoother. It also helps the gameplay a little, as the original version off the game was Kirby-esque in its slowness. The downside is that the music takes a hit. Not every track suffers, but the initial overworld theme definitely sounds out of tune. Something about speeding things up causes the bass line to sound off-key. It’s a shame, because when played at regular speed, this music is really catchy and charming. If you’re playing the game for the first time, or if you’re tone-deaf, you may not notice. Everyone else will be at least slightly irritated by some of the soundtrack.

The game’s difficulty curve is also a tad off-putting. It starts off nice and tough, but gets too easy too quickly. Find a few heart containers and magic potions, and you’re practically invincible. While I laughed out loud at most of the bosses due to their alternately bizarre and understated designs, one thing remained consistent: they’re all pretty easy. It doesn’t take much strategy to beat them. It’s almost always just “stomp the head” or “hit it with the ball!” They still do some damage, but there isn’t much to them.

This complaint feels a little unfair, but it’s still true. Since the game is nearly 20 years old, it lacks most of the advancements the genre has made over the years. Like in the classic Zelda games, you have to find a map and compass before you can properly find your way around. Like in Metroid 1, there are no health refill stations or save points. With few exceptions, if you die, you respawn from the same remote area of the map, no matter where you croaked. The game also uses an old-fashioned password save system, but since it’s on the Wii, it auto saves your current position as long as you quit the game through the Home button menu.

If I played Ufouria when it was first released, maybe my perspective would have been different. Maybe my mind would have been totally blown instead of just slightly popped. Still, I had a lot of fun with the game. Everyone who likes old-fashioned videogame weirdness and 2D exploration will get their money’s worth. When it comes to animation and character design, the game is among the best on the NES. The exploration elements are great. The action is fair-to-good. It feels a little short, but I wouldn’t be complaining about that if I didn’t enjoy it. If you’re playing the game on a European console, things will be a little slower, but the music will sound a lot better. Tack on 0.5 points to the score if you have a way to play this game at normal speed. For everyone else, Ufouria gets an…