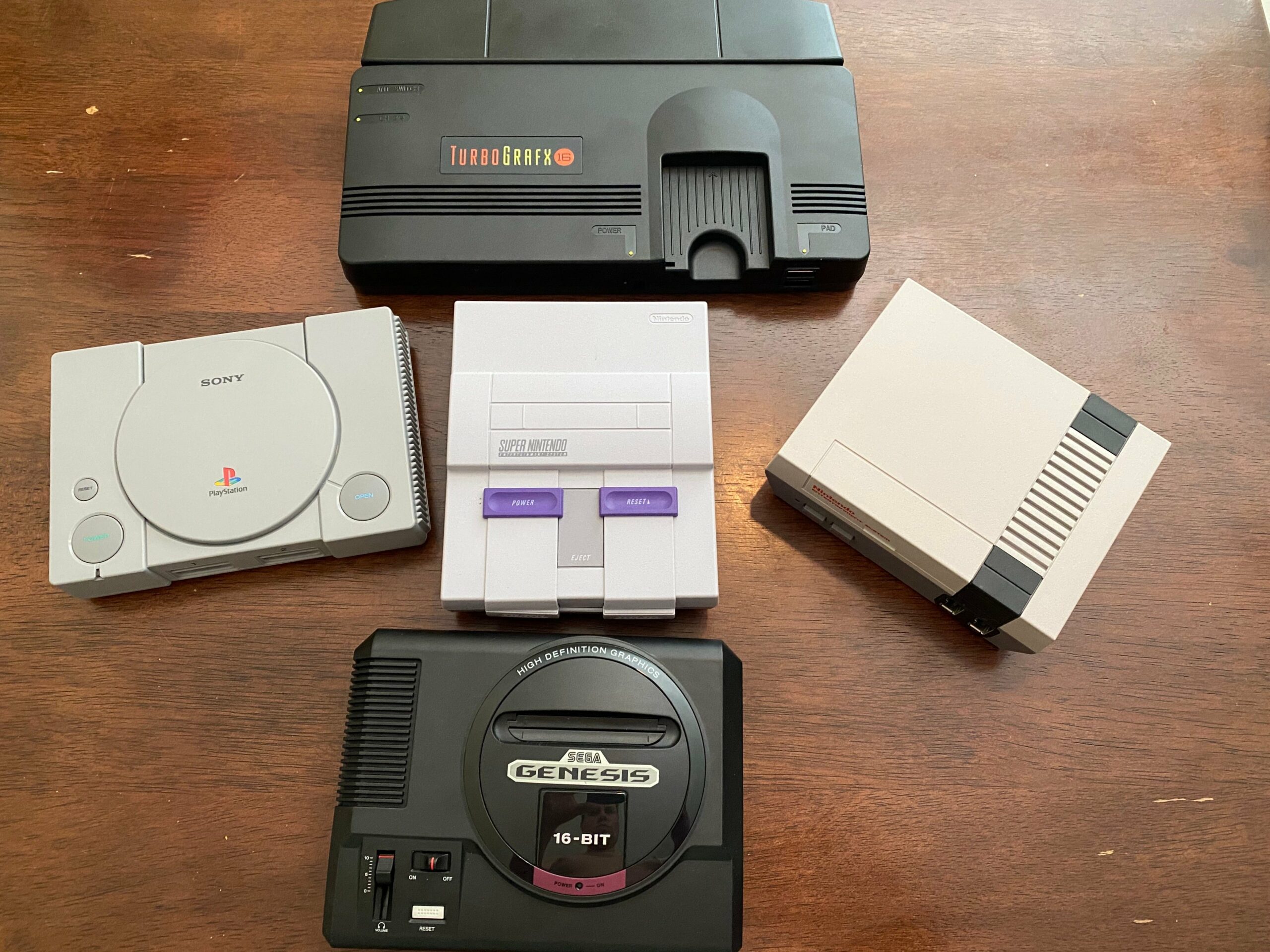 Finally, another way to play Bomberman ’93

There is no shortage of mini or micro-consoles on the current market, as publishers look to the past to try and package nostalgia.

There’s the NES and SNES “Classic Editions” from Nintendo, the Sega Genesis Mini, the Neo Geo Mini, and the PlayStation Classic, just to name a few. But in 2020, amid a global pandemic, another very curious contender has entered the ring: the TurboGrafx-16 Mini.

It’s hard to compete against those titans I just mentioned, but the TurboGrafx-16 Mini has a lot going for it for a very specific type of audience.

Here’s what you get in the TurboGrafx-16 Mini box:

Notice that it does not come with an AC adapter. I know the common response to that is “everyone has one,” but when nearly every micro-console lacks it, hooking up multiple units is annoying as hell if you have to buy adapters for them. I will fight this to my grave: it’s the new “batteries not included!” for gaming hobbyists.

The actual unit houses a “back cover,” which needs to be removed to actually slot the HDMI cable and the microUSB power cable into it. The latter is a bit finicky, as you need to slot the USB male end in just right since there’s a protective shell around it.

Other than that, installation is straightforward.

Sadly, the base package only sports one controller: you’ll need to buy more as an add-on. As a mini collector, this has become a huge pet peeve of mine, as casual fans will no doubt pick it up and be unable to play multiplayer out of the box. Also, years down the line when this product is no longer for sale, well-worn remotes will become mere fairy tales as folks try to track them down on eBay.

That annoyance aside, the controller itself more than gets the job done, as it feels authentic and has a lengthy nine-and-a-half-foot cable that puts most micro-consoles to shame (and two turbo settings is a nice touch). Oh, and by the way: if you hook up your unit and can’t control anything, note that the first player slot is on the top of the console. The TurboGrafx-16 Mini comes with two controller ports by default: you’ll need to buy a multitap accessory (specific to the Mini) to handle more.

The UI is absolutely adorable, as little cartridge mascots adorn the menus, which are easy to read and feature cute little animations for when a game “loads.” Pressing “run” [start] and select at the same time during a game brings up a universal menu with four save slots, on top of any in-game save functionality a title might have. Swapping between menus is near-instant and you can skip the cart insert animation (thanks!) to get into a game quickly.

The TurboGrafx-16 Mini boasts six languages out of the box, as well as five display options (four aspect ratios, one cute “screen within a screen” effect), a CRT filter, four wallpaper selections, and two menu designs. As is customary, manuals are found online via QR codes. Games can be sorted alphabetically, by format and release date.

Let’s start with a primer first.

The TurboGrafx-16 is actually a combination of two collections: US releases (TurboGrafx-16) and Japanese releases (PC Engine). There are 57 games total in the western release of the mini. Here’s the full rundown.

Notice just a few repeats? Also, keep in mind that the PC Engine games are still in Japanese — so you’re not getting a magically translated version of Snatcher, folks.

It’s going to be a deal-breaker for some, but Konami knows its audience. A large swath of people (myself included) are going to want to pick this thing up and don’t mind playing imported games or seeking out fan-translated menu walkthroughs. In fact, the opportunity to play original Japanese releases in a legal fashion is tough to come by, as “mini or micro-console” manufacturers typically just leave them out of production entirely.

Regardless of those aforementioned hangups, there are some real classics bundled into this mini. Bomberman ’93 and Bomberman ’94 are pretty much universally beloved, and still hold up today as Konami constantly tries to chase what made the original run so special. Castlevania: Rondo of Blood needs no introduction (even if it has no shortage of systems that run it at this point), and the same goes for Fantasy Zone, Gradius, Ghouls ‘n Ghosts, Ninja Gaiden, R-Type, and Splatterhouse.

Konami also isn’t afraid to deliver a few completely bizarre offerings, like JJ & Jeff: an adventure platformer that features literal toilet humor and cartoony physical detective comedy. On the flipside, there’s games like the hidden gem Lords of Thunder — a shoot ’em up (shmup) with a heavy fantasy theme and RPG elements — or Parasol Stars, the often forgotten third game in the Bubble Bobble series that features Bub and Bob as humans.

There’s a lot to work with here and there’s a great selection for pretty much every retro enthusiast. At the end of the day you just need to realize this console was released in Japan in 1987 as the PC Engine, and came westward as the TurboGrafx-16 in 1989. If old games aren’t your thing, very few of these entries are going to completely convert you.

Grievances against the hardware pack-ins aside, if you’re a collector, the TurboGrafx-16 Mini absolutely worth adding to your collection.

In terms of UI aesthetics and functionality, this is one of the most fun micro-consoles I’ve experienced. Everything is lightning fast and not annoying to sift through in the digital realm. There’s also a lot of potential for retro parties (once this whole pandemic thing is over) with the separate multi-tap accessory that allows for three to five players for specific games (Dungeon Explorer, Bomberman ’93, Bomberman ’94, Bomberman Panic Bomber, Moto Roader).

If you want it, the console is exclusive to Amazon and will you run $100 for the system and one controller. It currently does not have a worldwide release date due to the pandemic situation.

[This review is based on a retail build of the hardware provided by the manufacturer.]