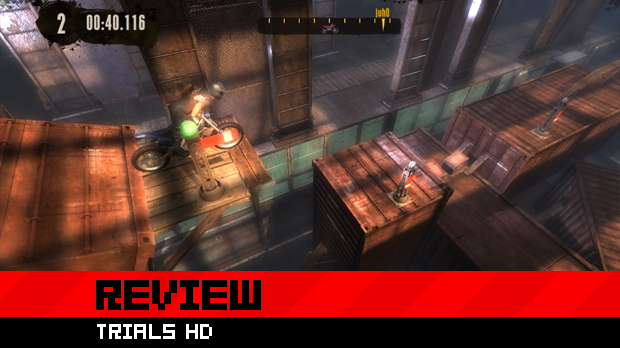 At first glance, Trials HD didn’t look like my type of game. It’s sort of a hybrid racing game/physics puzzler with a heavy emphasis on demanding perfection. Skill-based games like this aren’t exactly doing my high blood pressure any good, so even though I understood the appeal of Trials HD, I initially wrote it off altogether.

It was only after a bunch of my friends strongly urged me to at least try the demo that I even considered seeing what all the fuss was about. Yes, I almost missed out on Trials HD. I care about you guys, and I wouldn’t want any of you to make the same mistake.

Read on past the break to see why you should give Trials HD a fair chance too. 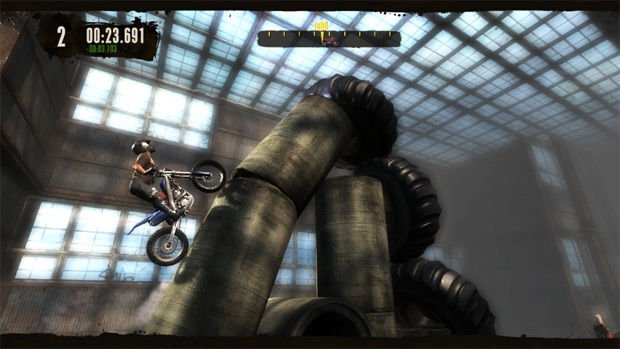 As with any physics-based game, Trials HD is all about precision. The difference with Trials, however, is the inclusion of breakneck speeds. While there are only three seemingly easy things to learn — gas, break, and tilting your rider — the “courses” you make a mad dash across are what push the equation into complexity. More often than not, you will be riding on top of piles of tires, boulders, and a number of other oddly-shaped materials, which is why I say “courses.”

Calling Trials HD a racing game makes sense about half of the time. In some levels, sure, you will be going as fast as possible while trying to maintain a perfect run, but that isn’t the case for the entire game. Plenty of tracks happen to be the complete opposite, requiring you to take it nice and easy because the route to the finish line isn’t immediately apparent — this is where Trials HD becomes more of a puzzle game than a racer, weird as that sounds.

“Easy to learn, but hard to master” is a phrase that, as a gamer, you should be able to associate with, so I’m going to use it to describe Trials HD. The ultimate goal is to earn medals on each of the thirty-five levels. For bronze, you simply have to finish the course. Silver, on the other hand, limits you to a few faults. And gold, being the sinister and downright cruel bitch of a medal that it is, can only be obtained by completing a course in under a certain amount of time while not crashing even once (the later, more difficult levels tend to allow a couple of faults). 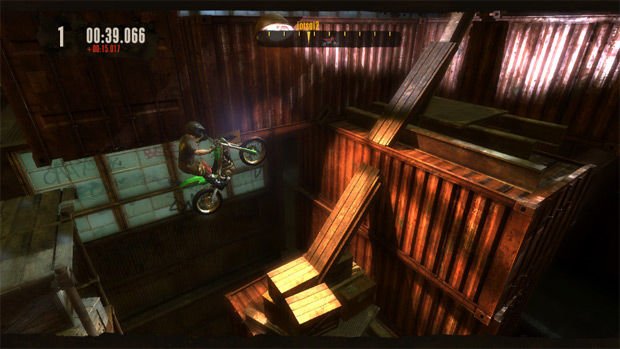 Besides wrecking your bike, faults also happen when you manually restart to the last checkpoint. To give you an idea of what you’ll be dealing with in Trials HD, it can take hundreds of faults to complete some of the later levels. And getting gold medals on these vile tracks? Hah! No … just no. It’s not happening. At least not without an awful lot of practice under your belt. Online-enabled leaderboards combined with the medal system propel Trials HD from being “I can’t put the controller down” addictive to “oh my God, it’s 3:00 AM and I’m all sweaty — what’s going on!?” addictive.

Trials HD isn’t one-hundred percent about dishing out the punishment, thankfully. The checkpoints are plentiful and more often than not placed smartly. Stuck on a considerably tough segment? Chances are fairly high that if you manage to get through it, there will be a checkpoint immediately afterward. This helps to lessen the blow for particularly tough tracks.

One unexpected yet appreciated aspect is the inclusion of mini-games. Usually I could not care less about this sort of thing, but the mini-games found here are fun to play and successfully diversify a conceptually basic game like Trials HD. From flying on a rocket-powered bike to doing loops in a moving sphere cage to trying to break all of the bones in your rider’s body, there’s something for everyone. 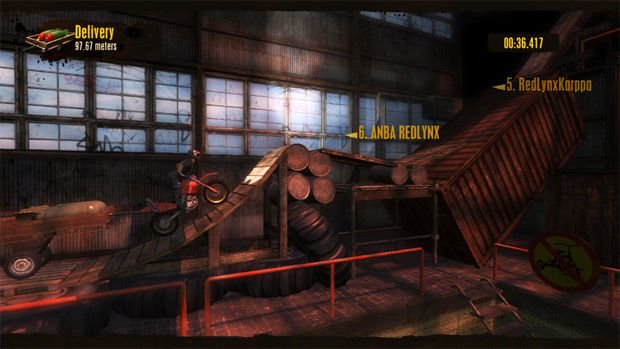 While RedLynx might not have invented the concept of shoving leaderboards in your face whenever possible, the studio has damn near perfected this design philosophy in Trials HD. Not only do you get to see how you rank among friends after completing a track, you also get to see how good you are in real time while playing a level. There’s a little meter at the top of the screen that shows how close your position is at any given time compared to your friends’ best run-throughs. This helps to show exactly where on a course you struggled most and allowed your rival to shave off a few extra seconds on his time.

Similarly, this focus on making Trials HD competitive without having an actual multiplayer component carries over to the mini-games. For the ones that are distance-based rather than score- or time-based, there are markers pinned down on the track for each of your friends’ furthest distances; an already addictive game suddenly becomes on par with the cocaine that is Geometry Wars 2. It’ll ruin friendships.

A second surprise for me was the extensive level editor present in Trials HD. In our interview with RedLynx, we were told it’s the same editor the developers used to create the game’s actual tracks, and I absolutely believe it. The basic options are pretty intuitive, and even the more advanced stuff doesn’t take all that long to become familiarized with.

A level editor of this caliber would be pointless unless you could share custom levels with your Xbox LIVE friends, which is exactly what you are allowed to do. Similarly, you can download friend-created levels directly to your hard drive, but access to public levels is sadly restricted. My guess is that there simply wasn’t the development budget to have someone policing the user-created levels since Trials HD isn’t a retail game. 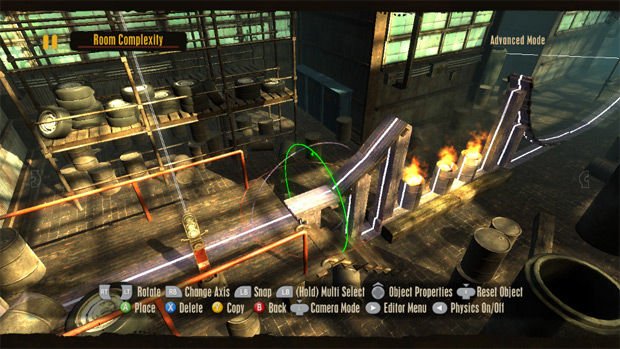 While there seems to be some positive buzz now, I feel as if Trials HD will likely be overlooked in the long run, especially considering its $15 price point. But the package — a full single-player game, twelve mini-games, and a level editor — left me feeling like there was plenty of content for the price. You can tell a lot of love went into Trials HD; the level of polish is surprising to see in a download-only title.

If you like your videogames to be tough as nails, Trials HD is definitely worth checking out. Admittedly, I found the last segment of the game to be difficult to the point where I couldn’t fathom ever completing the final courses, but I’d rather have them be too hard than so unbelievably easy they become boring.

While you don’t necessarily need to enjoy racing games to fully “get it,” I’m sure it’d certainly help. There aren’t many games like Trials HD in existence, especially not on Xbox LIVE Arcade, which should be reason enough to get you looking in the first place.

If you enjoy what you see in the demo, by all means, download the full game. You won’t be disappointed.