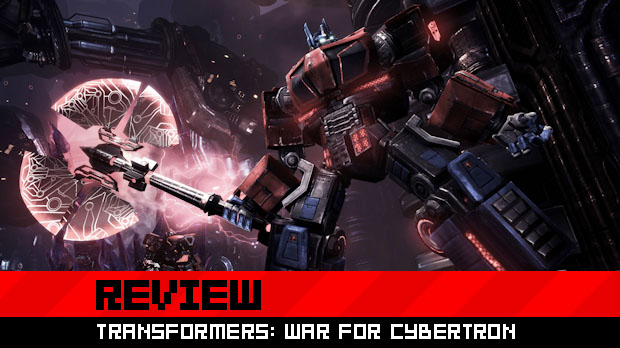 Transformers: War for Cybertron aims to do what few Transformers games have ever done — be good. Better than good, in fact. It aims to be great. Unlike previous abortions like 2009’s Transformers: Revenge of the Fallen, this original take on the Transformers franchise has been developed by real fans of the source material, with respect, care and a commitment to providing a quality product.

That’s the intention, but how has it worked in practice. Does War for Cybertron stand or fall? Does it have the touch or is it an instrument of destruction? Does it dare disrupt your coronation or is it bad comedy? Is it more than meets the eye or is it a bad game in disguise? Is it Megatron or Megashit? Read on as we review Transformers: War for Cybertron. 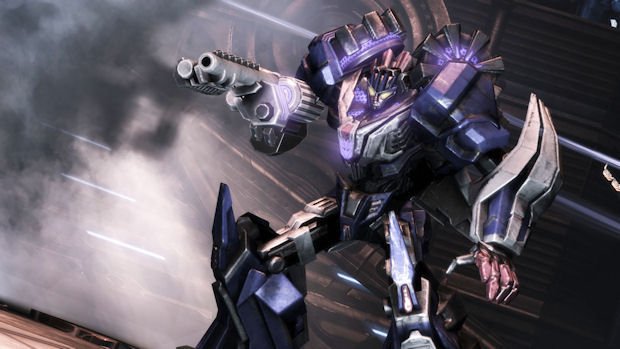 War for Cybertron is a prequel to the established G1 canon in which the Transformers drained their home planet of Cybertron and ended up on Earth. Pushing the story right back to the heyday of the Cybertronian civil war, War for Cybertron sets out to explain and define many key plot points of the entire franchise, such as Optimus Prime’s rise to power and Starscream’s joining of the Decepticons. Although some elements of the story are disappointingly glossed over, possibly to sell the accompanying novel, it has to be said that War for Cybertron‘s narrative is surprisingly tight, exciting and surprisingly witty.

The story mode is split into ten chapters, five for the Decepticons and five for the Autobots. The Decepticon campaign details Megatron’s quest for Dark Energon, a new power source that he believes will help him win the war. The Autobot campaign sees Optimus and his friends struggle to survive a Cybertron that has almost been totally dominated by Megatron’s forces. Both campaigns are solid, although the Autobot campaign is far better, with a wide variety of killer setpieces, brilliant references to the 1986 movie, and a fantastic selection of boss fights. I won’t spoil the bosses, but fans of Soundwave will be thoroughly impressed by his particular appearances in the Autobot campaign. 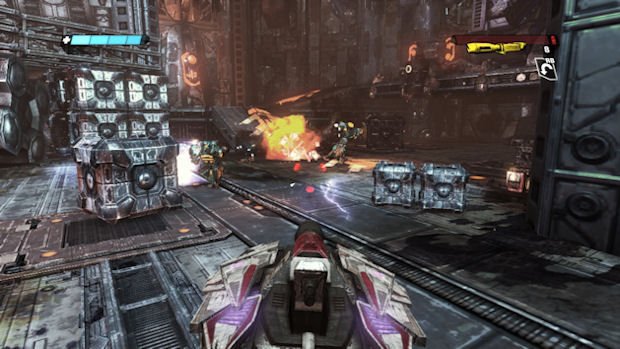 Both campaigns are quite short, but can be replayed with different characters and taken on in three player co-op mode. The co-op is highly recommended as the game’s difficulty is clearly designed with it in mind and does not scale for single players. The Transformers don’t take much damage at all before they go down, and while co-op players can revive each other, single players will be helpless.

One other thing worth noting about the story mode is its restriction on playable characters. Each game’s chapter limits you to a pool of three predetermined characters. The Decepticon Seekers, for example, can only be used in Chapter Two and the Autobot jets can only be used in Chapter Nine. Not having the ability to decide which character you want to play in any chapter isn’t the biggest deal in the world, but it’s a little bit of a letdown.

Unlike previous Transformers games, the controls in War for Cybertron are rock-solid. Predominantly a third-person shooter in the vein of Gears of War, each Transformer handles perfectly, carrying with them a feeling of weight without a sense of sluggishness. There’s a wide range of weapons, most of which are useful and suit a particular style of play. There are options for sniping, exploding, or outright bullet spraying. The lack of a cover system hurts somewhat, especially in single player when enemies can become overwhelming, but so long as players remain aware of their surroundings, it shouldn’t be too big a deal. 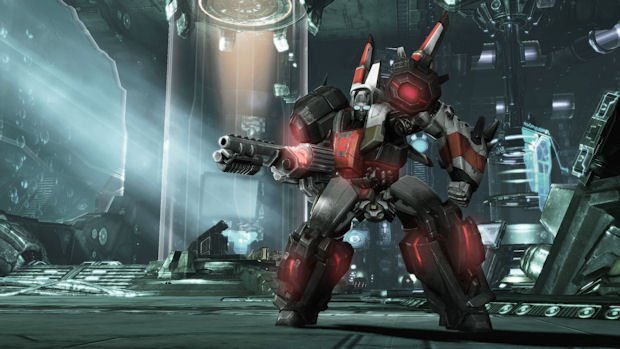 It’s the vehicular alt-modes, however, that really steal the show. The vehicle forms are often where games fall apart, as they’re usually either worthless or impossible to control. On the contrary in War for Cybertron. Each of the game’s four vehicle types — cars, trucks, tanks and jets — work perfectly and are outfitted with their own weaponry for devastating firepower. With full maneuverability and an optional speedboost, alt-modes are no longer just something relied upon to get from A to B quicker.

Each Transformer also gets two special abilities that range from pointless (Dash) to brilliant (Whirlwind). The various abilities are easy to forget about but can have a real effect on the battle, although a few of them, like Hover, can make players more vulnerable to attack. Depending on the ability, they are either subject to a Cooldown limitation, or need to be recharged with Energon Chips taken from downed enemies. It would have been nice for the campaign mode characters to get their own unique special ability as opposed to drawing from a restricted pool of multiplayer abilities, as the characters aren’t quite as varied as they could be. Nevertheless, the abilities are a welcome addition, provided you have the right ones. 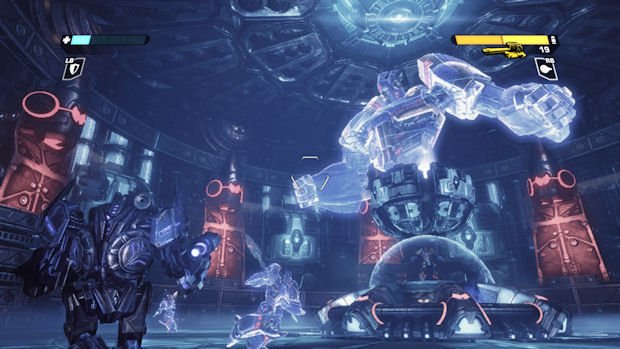 Multiplayer is a key factor of War for Cybertron, and the short version of the story is that it can be pretty damn fun. Absolute chaos and anarchy, but fun nonetheless. There’s a healthy selection of game modes, such as the territory-gaining Power Struggle or bomb-planting Countdown to Exctinction, although your main focus will always be kicking the tailgates of your opponents in a variety of destructive ways.

Players must create their own characters for competitive multiplayer, choosing from four character classes to build the bot that’s right for them. Leaders transform into trucks and can buff/debuff other characters, Soldiers are hard-hitting combat troops that turn into tanks, Scientists turn into jets and specialize in both healing and sabotage, while the Scout transforms into a car and deals in hit-and-run tactics, as well as cloaking abilities.

Experience points are earned with each game, and as character classes level up, they gain access to new weapons and a range of unique active or passive abilities. Each custom character can select two weapons, two active abilities and three passive abilities, and there’s plenty of room for multiple character builds of the same class. The most versatile is the scientist, who can be built to act as a medic, or to go behind enemy lines in disguise, or to unleash sentry bots that can spew rockets at the enemy. It’s not the deepest system in the world, but it’s versatile enough for players to feel that they’ve created their own unique set of robots in disguise. 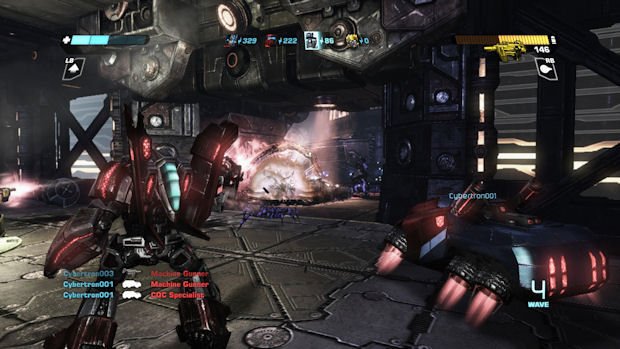 One disappointing factor is the appearance of the characters themselves aren’t open for too much customization. Essentially, you pick a skin and give it a paintjob from a rather restricted selection of colors. Fans who may have it in mind to create their own versions of classic G1 characters will be disappointed, You won’t be able to fit Wheeljack, Sunstorm or Grimlock into this game, because the skins and colors just aren’t up to it.

The multiplayer can be incredibly enjoyable, but it can also be incredibly frustrating. With so much chaos, it can often be a case of pure luck as to whether or not you live or die. Using the melee attack is like rolling a dice, and some of the weapons currently feel very imbalanced. It’s no fun unloading two clips of ammo into an enemy, only to have them take you out in two shots. The game also exasperates with a huge amount of Assist Kills, which donate nothing toward a player’s game score. This means you could get up to eight assists yet end up looking like the worst on your team. Assists should count toward the game as they do in Call of Duty, especially since losing kills to other players seems to be a very common issue in War for Cybertron. 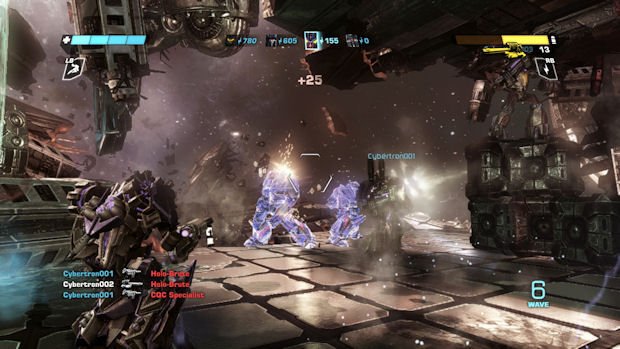 It’s a shame that the multiplayer can be so annoying with lost kills and overpowered weapons, because it’s nicely put together and really kicks ass when you get into a great game. With a little tweaking, it could be thoroughly superb, but it’s still most assuredly worth sinking some hours into. As it stands, I’ve certainly had my fill and I think I’ll be waiting to see if any patches come in before hopping back into it.

Backing up the competitive multiplayer is a co-op “horde” mode known as Escalation. This incredibly challenging mode pits up to four players against waves of enemy Transformers. Things get very difficult in this game very quickly, and players will have to work together in order to survive. Each player earns Energon from their kills, and can spend them on ammo, weapons or health. They can also buy items for other players, meaning that, with good teamwork, a group of players can pool resources and ensure the entire party remains healthy. Unfortunately, the lack of host migration in the game can make Escalation a bit of a time risk. I played through a lengthy dose of Escalation, only to have the host quit and cause me to lose all my progress. It’s very annoying, so it’s best to make sure you play Escalation with good friends who have solid connections. 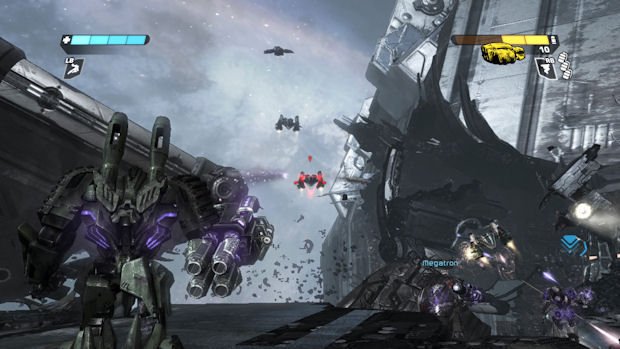 It’s worth noting just how good War for Cybertron looks as well, both in terms of its graphics and its artistic style. The quasi-G1 design of the Transformers themselves is fantastic, being familiar yet original, and avoiding the overcomplicated mess of the Michael Bay monstrosities. High Moon has done an amazing job of making these robots feel alive rather than just dull metal constructs. Mechanical parts move and flex, portions of the chassis subtley glow, and the transformation animations are superb. The voice cast is also rather excellent too, headed up by Optimus Prime regular Peter Cullen and joined by a host of solid actors who do their best to bring the Transformers to life.

Transformers: War for Cybertron is a rousing step forward for the franchise as it pertains to videogames. A thoughtfully crafted story mode, an intense multiplayer mode, online co-op and a full on horde addition makes this the most robust, lovingly developed and authentic Transformers experience you could hope to get on a home console. Some of the character and customization restrictions are disappointing and the frustrations of multiplayer can sometimes provide cause for tooth grinding, but the overall experience is a most worthy one indeed. Transforming your cash into a purchase of this game is something you may want to seriously consider.