When most people think of PC storage, they think of the jolly ol’ mechanical hard-drive. Whap it into your computer, save all your stuff on it, and have a grand time. Plenty of people also think of the faster, quieter, and currently more expensive little brother of the hard drive, the SSD.

I somehow managed to miss until only a couple of weeks ago that there’s a third alternative these days: the NVMe (Non-Volatile Memory Express) SSD. Functionally the same as an SSD, these plug into your motherboard’s PCI-E slots (much like a graphics card) and allow for speeds higher than a standard SATA-connected SSD.

To see whether this funny kind of storage gives any benefit to my gaming, I got my hands on a 512GB Toshiba OCZ RD400. The advertised numbers are certainly impressive, with up to 2,600/1,600 MB/s sequential read/write speeds and random read/write speeds of 210,000/140,000 IOPS (which, important note, doesn’t mean a whole lot).

You can see the long list of full specs on the OCZ website, but the long and short of it is that the RD400 is, in theory, three times faster than any of Toshiba’s standard SATA drives, which are in turn much quicker than any mechanical drive.

So how does this have any impact on game performance? Honestly, not that much. But there are still plenty of benefits to considering an upgrade, and it is bloody fast. 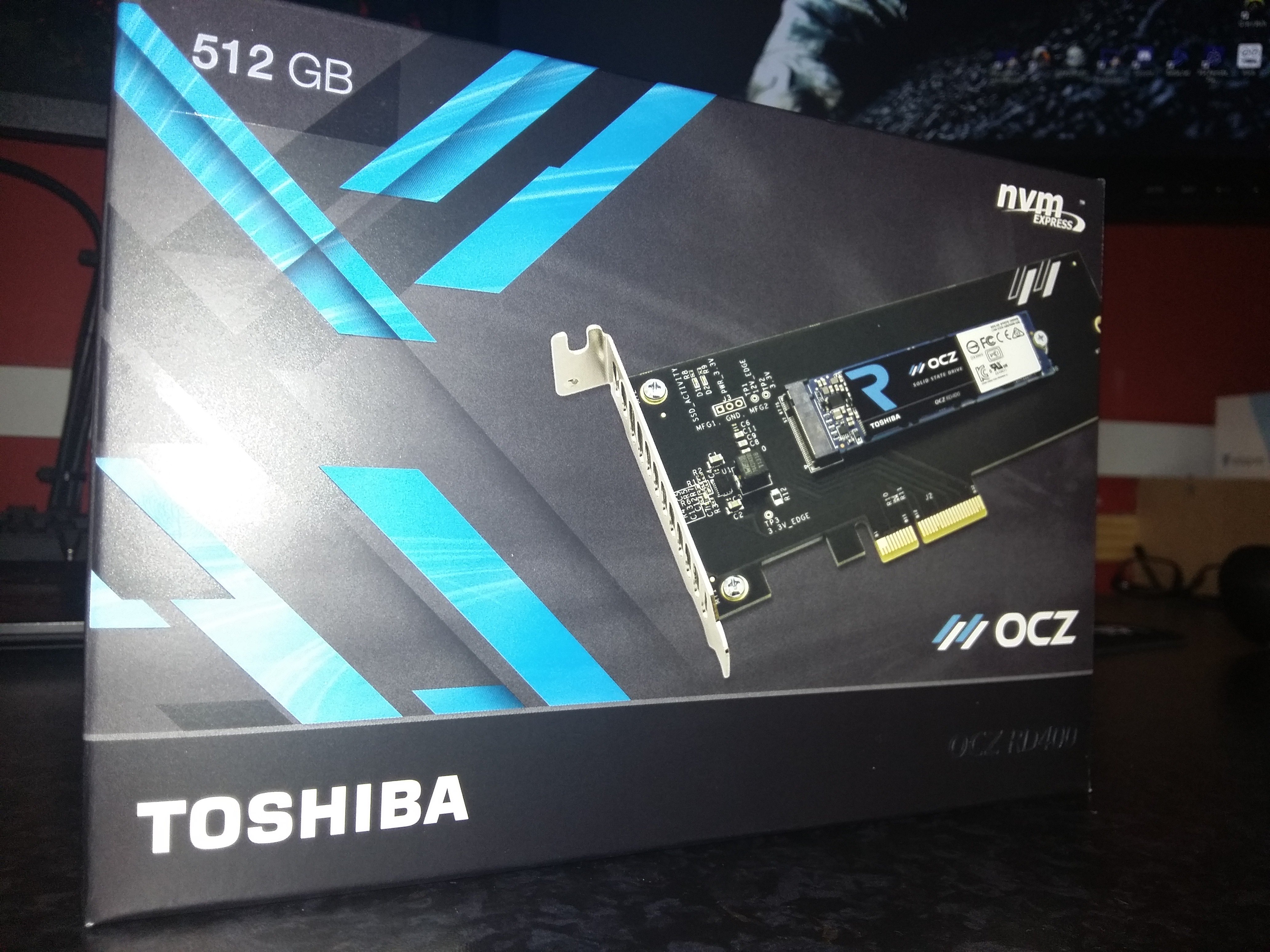 Installation of the OCZ RD400 was surprisingly easy, especially seeing as I received the version that has the PCI-E adapter card pre-installed. However one without it in its M.2 form is available for laptop systems, and the adapter is sold separately should you need it.

Whap it into a PCI-E slot, download the relevant drivers and SSD managers, restart the PC, set it up as a volume in Windows Explorer, and et voila. There was no fussing with SATA cables or power leads, and it doesn’t take up any more room in my already pretty full storage bays.

At this point, it’s worth understanding how exactly storage could improve your gaming experience. SSDs, even NVMes, won’t make a weak system stronger. All game processing is still offloaded to more crucial components like the graphics card and the CPU, with storage just being where the files are accessed from.

However, if that area can be accessed and written to faster, as is the case with NVMes, you will see an improvement in a few specific areas. Load times will be radically reduced, and games that make use of asset streaming (like big, open worlds) may stutter less as new assets are loaded in.

With that in mind, I wanted to test how the OCZ RD400 compares to what most people will be running games from at the moment, a standard and admittedly fairly old mechanical hard drive. To do so, I compared the initial loading times of five different games installed on both drives. The five games are Total War: Shogun 2, Crusader Kings 2, Fallout 4, Sir You Are Being Hunted, and Grand Theft Auto V, all of which I’ve suffered long load times from for frankly far too long. 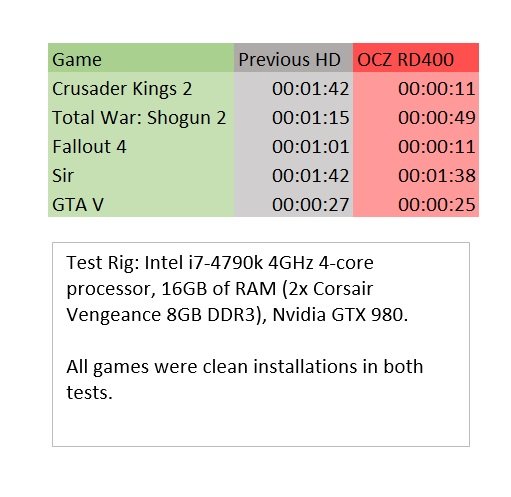 As you can see, on the whole there was a massive decrease in loading times. Crusader Kings 2, which I could nip off to the toilet while waiting for it to load before, now opens up in just over 10 seconds. I’d probably spent more time faffing with the loading screens in Fallout 4 than the game itself, and now the wasteland just zips.

The only significant outliers were Sir You Are Being Hunted’s initial world generation, which only saw a four-second decrease and, surprisingly, Grand Theft Auto V’s story mode. It’s not all bad, though, as GTA V and Fallout 4 both benefited from more stable (albeit not increased) frame rates when moving quickly through the world as the assets could be loaded in fast enough to keep up.

So should you bother upgrading? NVMes like the RD400 have the benefit of not taking up space from your pre-existing storage, and so if you have a PCI-E slot free, it’s less a question of replacing and more one of adding. Having a spare SSD to install the bigger games you’re playing at the moment is certainly handy for cutting down on load times, and as you can see above those reductions can be pretty damn substantial. So if budget’s not an issue for you, the OCZ RD400 is easy to recommend. I might actually learn to play Total War: Shogun 2 now that I don’t have to camp out for the night waiting for it to load. 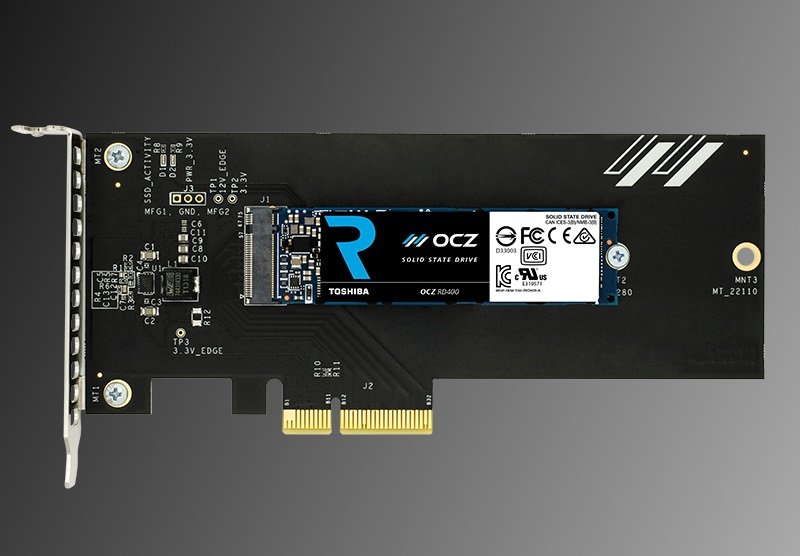 On the other hand, it’s also a bit more expensive compared to standard storage devices at a hefty $0.64 per gigabyte for the 512GB model versus roughly $0.46 for standard SSDs of the same capacity. While that is cheaper than the other NVMes on the market at the moment, it’s still difficult to justify spending this much on storage when it could equally just go towards a new video card or a new processor instead, which will definitely give a more noticeable performance boost. In other words: don’t buy this if you also need to upgrade other things.

All in all, as far as storage goes, Toshiba’s OCZ RD400 is a very nice bit of kit. It’s small, it’s fast, and it’s easy to install. If cutting down on lengthy loading times is your goal, or you’re in the market for an SSD anyway, these are definitely the best way to go. It won’t turn a crappy PC into a monster, but it’ll certainly give the monsters a bit of extra bite.