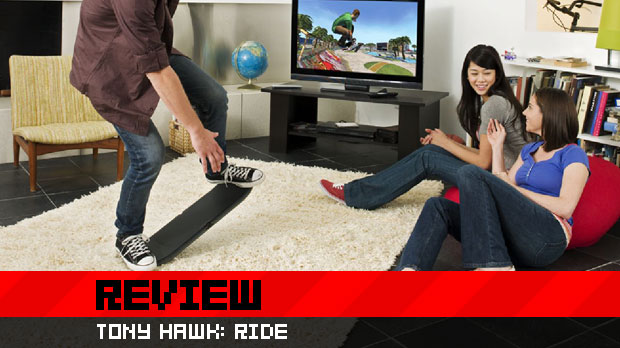 Ever wanted to actually get on a skateboard, but simply couldn’t find the time to leave your living room?

Having lost a lot of market- and mind-share to its competition, Activision went back to the drawing board, and the result has finally hit the market. Introducing Tony Hawk: Ride, Activision’s attempt at reviving its popular skateboarding franchise with an innovative motion sensing controller that resembles a real-life skateboard.

But is it any good? Is Tony Hawk: Ride worth its steep admission price? Read on to find out.

Up front, it must be said that there aren’t many positive things you can say about Tony Hawk: Ride. If you’re reading this review hoping that it will justify a forthcoming purchase or holiday gift, you’ve come to the wrong place. There are many words between this paragraph and the last, so I’ll do you the favor and save you some time — Tony Hawk: Ride is one of the most disappointing and frustrating titles in the history of videogames. The Atari 2600 version of E.T. may have finally met its match.

I’ve always been taught that if you don’t have anything nice to say, don’t say it at all. But since I’m tasked with reviewing this new take on the game “genre” that Tony Hawk (with the help of Activision and Neversoft) popularized, I have no choice. So let me get the good stuff out of the way first.

Tony Hawk: Ride introduces a motion sensing skateboard controller as its main gimmick, which on paper most definitely sounds intriguing. The idea is to provide gamers with an experience that’s completely different from anything seen in the living room before, taking skating games to the next level by allowing players to more closely mirror the real-life activity of skateboarding. 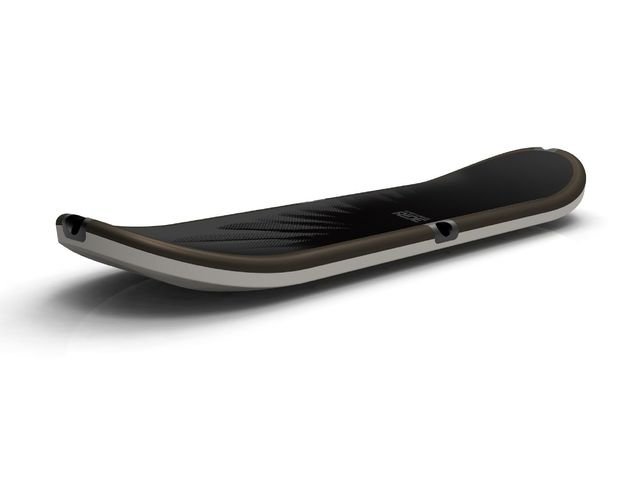 The peripheral itself is impressive, large and sturdy, capable of withstanding the pounding and abuse necessary to perform the movements the game requires. The board features a nice “grip tape” like finish which keeps your feet from sliding around on the board, provided you’re wearing sneakers or those comfy Totes slipper socks with the rubber grips.

The board itself has two internal accelerometers to detect front to back and side to side motion, along with four sensors on each side of the board to detect hand (and sometimes, foot) movement. It’s a clever and innovative peripheral, well constructed and, in theory, should provide that “real life” skating experience. Keyword, of course, is “should.” More on that in a bit.

Tony Hawk: Ride also has a pretty large and varied soundtrack, continuing a long-standing Tony Hawk videogame tradition. The soundtrack ranges from solid tracks and surprises to mostly inoffensive tunes which, while they don’t particularly embody the 80s skate culture the game attempts to tap into, work well enough in the game’s context.

Okay, so that’s about it for the positive stuff, as problems with the game begin almost immediately as you place the disc into your console.

Tony Hawk: Ride begins by having you calibrate the game’s skateboard controller. It’s a five to ten minute process that requires you to step on the board in four places, clear the area of any obstructions, and listen to a bored-sounding Tony Hawk as he tries to feign excitement for the game and the world’s most advanced videogame peripheral. Once you calibrate, you’re ready to go, and you shouldn’t have to calibrate again unless you change batteries, or which console the board is connected to. 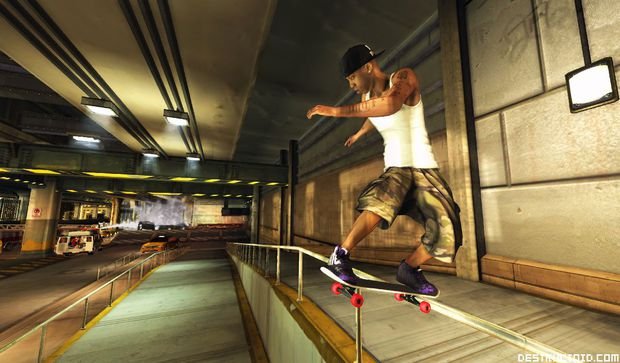 Of course, I re-calibrated the board numerous times after booting up the game that first time, because I was sure I had done something wrong. Early on during the game’s tutorials, I was finding I was having trouble pulling off what I would consider to be the most basic moves.

Example: simply navigating your skater, moving him or her left and right, is a frustrating and hair-pulling chore. While the game’s tutorials note that you simply only have to make slight movements, even those slight movements can sometimes result in your skater veering far off in your direction of choice.

Fortunately, the game comes in three flavors of difficulty to help with this — Casual, Confident, and Hardcore. Confident is the game’s default setting, offering you no guided path and letting you direct your skater as you see fit, providing only small nudges to help you line up tricks. Hardcore (unlocked after a few successful Confident runs) takes off the training wheels entirely. Casual places your skater on rails, following a guided path and allowing you to focus on tricks.

After a good hour or so of shouting profanities at the screen (it was an annoying, near-impossible hassle to simply navigate my skater through checkpoints in the “here’s how you move” beginner tutorial), I spent the rest of my time on Casual, hoping I could at least enjoy pulling off tricks. 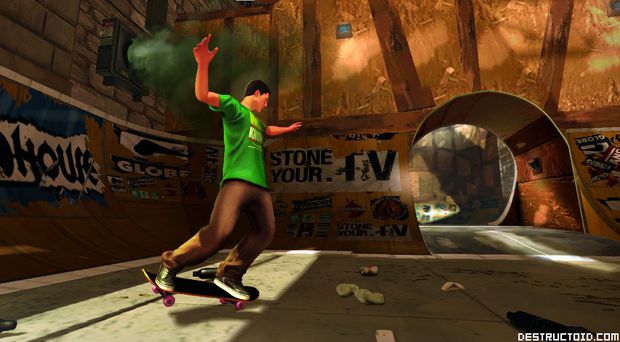 No such luck. While going “on rails” Casual made the game slightly less frustrating, it quickly became apparent that either I didn’t have the skills required to pull of simple tricks, or the board peripheral and the game simply didn’t want to cooperate with one another.

I’ll admit that my coordination on a skateboard isn’t the greatest, but based on the experience of several others who I made play the game, it became very obvious the issue was the latter. Most of what the game wants you to do is simply not possible with any kind of accuracy or predictability on the Tony Hawk: Ride skateboard peripheral. In fact, trying to get your on-screen skater to perform how you’d like is easily the most frustrating thing I’ve had to do with any videogame to date.

I couldn’t execute flip tricks — supposedly done by raising the board on one end and pivoting left or right — with any reliability whatsoever. Even when trying to follow the in-game tutorials to the letter, whether or not my skater would perform the trick was hit or miss. More often than not, raising the board and pivoting left or right resulted in me calling the game a “f*cking a**hole” or, at one point, picking up the board and throwing it on the ground like a malcontent child. It’s simply that infuriating.

For awhile, I thought it might be the fact that I simply didn’t have the coordination, so I took a new approach — moving the board as directed by the tutorials with my hands. Even with the more accurate movements (with myself on the floor, directing the board), I still couldn’t pull of tricks with any reliability. During my skate sessions, I had the most luck getting points by stomping down on the board with one foot and flailing wildly to perform seemingly random tricks… and sometimes that didn’t even work. 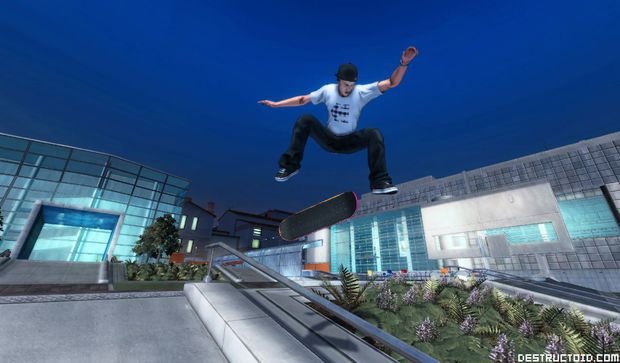 Trying to pull off grabs tricks isn’t any less infuriating. While your skater is in the air, the idea is to place your hands over or near the sensor (you don’t have to actually touch them) to do grab tricks and other advanced modifiers. The problem with this is twofold. One, depending on your height, you may have to crouch down pretty low and close to the sensors to get them to recognize your movement (if you’re lucky). For most people, myself included, this action will become tiresome after only a few minutes of gameplay.

The second problem is that sometimes all kinds of other things in the peripheral’s area will get picked up by the sensors. Wearing jeans? The cuff may actually be covering a sensor. Your couch too close behind you? Back sensor covered. Shoelace? Watch out for that sensor. The result, of course, is the game and the controller getting confused and, once again, me picking up the skateboard controller only to toss it back down.

Another neat thing about this “hands free” gaming experience is that it’s really not. While many of Tony Hawk: Ride‘s in-game menus can be navigated by performing nollie and ollie actions on the board, the game requires that you also have a controller connected to your system. You’ll have to use this controller to navigate the game’s main menus, and you’ll probably also use it to navigate pause menus, and every other menu in the game. Why? Because, like in the game, using the board to do so is both annoying and frustrating.

With that said, it’s likely you’ll end up holding the controller in your hand the entire time you play. That’s what happened to me, and it caused two things to happen. One, I spent most of the time wondering if someone was going to hack this game to play with a standard controller. Two, it gave me another thing to throw when I got angry, because I was getting tired of bending over to pick up the skateboard peripheral to toss. 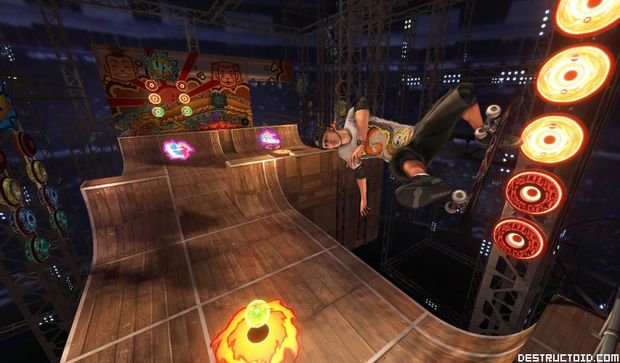 So let’s say you can actually perform the tricks and movements the game requires. Maybe you’re Tony Hawk, for instance. Even then, the game itself doesn’t have much to offer. The entire career campaign (“Road Trip”) is an uninteresting, messy menu-laden affair that can be completed in a matter of a few hours. It consists of three session types — Challenge, Trick, and Speed. Challenge has you flailing around to nail tricks/scores in highlighted areas; Trick has you attempting to score a specified number of points, flailing around on the board to do so; and Speed has you racing from one end of an area to another.

Then there’s also “Free Skate,” which allows you to openly skate around any of the areas you’ve unlocked, which you probably won’t ever want to do because you were so miserably frustrated or bored while playing the other session types.

Finally, Tony Hawk: Ride also has a multiplayer party mode, so you and a few friends can stand around and share the frustration among one another. Alternately, you can go online and (provided you can actually find anyone unfortunate enough to be playing the game) commiserate with others who also wish they had spent $120 on pet rocks or two good games. 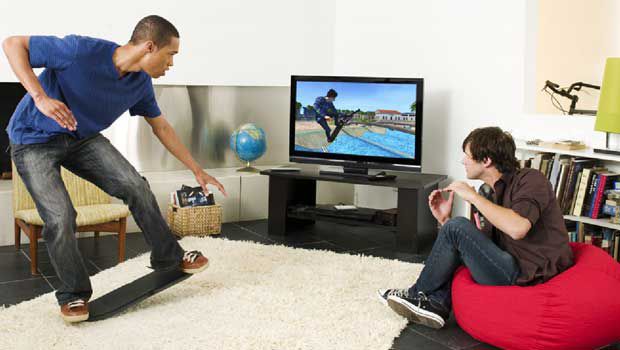 Yes, Tony Hawk: Ride costs $119.99. That’s a hard price to swallow for any game and a peripheral, even if the title did deliver on a compelling and interesting experience. But the fact is, Tony Hawk: Ride simply doesn’t. In fact, if Activision gave the board away at no cost, selling it for the cost the disc alone, it still couldn’t justify the price.

In theory, Tony Hawk: Ride could have been an interesting and fresh gaming experience, and Activision and Robomodo should at least be commended for taking a chance. But in execution, Tony Hawk: Ride falls flat in nearly every aspect. Understandably, the franchise had begun to lose its luster, and Electronic Arts had swooped in with its own, fresh take with Skate. Activision had to do something. And Tony Hawk: Ride certainly is “something.”

But if you’re looking for “something” to make you wish Neversoft had released Tony Hawk Underground American Wasteland Project 10 Hero: World Tour this year, I’d suggest giving Tony Hawk: Ride a try. For everyone else, considering buying a real skateboard, or busting out that copy of Tony Hawk Pro Skater 4 to remember the good old days… they’re most certainly behind us.

Score: 2 — Bad (2s are a disaster. Any good they might have had are quickly swallowed up by glitches, poor design choices or a plethora of other issues. The desperate or the gullible may find a glimmer of fun hidden somewhere in the pit.)